I think we’re finally beyond the point of worrying about spoilers for Captain Marvel. We always tread lightly when it comes to new movie releases because we don’t want to ruin the fun for someone who couldn’t make it on opening weekend. But not only are we well past the launch of the movie, it will be available on Amazon any day! Besides… you need to go see Avengers: Endgame if you haven’t already! (Or if you have, go see it again!)

In the movie, we spent a lot of time trying to figure out who the good and bad guys were. There was a lot of redirection that left us unsure for most of the movie. Captain Marvel had to figure out who her allies were, who she could trust and who could be bad guys in disguise. Those concepts are wrapped up nicely in Captain Marvel: Secret Skrulls hidden identity game from USAopoly. The Skrulls are trying to eliminate Captain Marvel but her secret allies are working behind the scenes to protect her. Each player takes on a role of one of the Captain Marvel characters with the goal of trying to achieve their own personal objective to win! 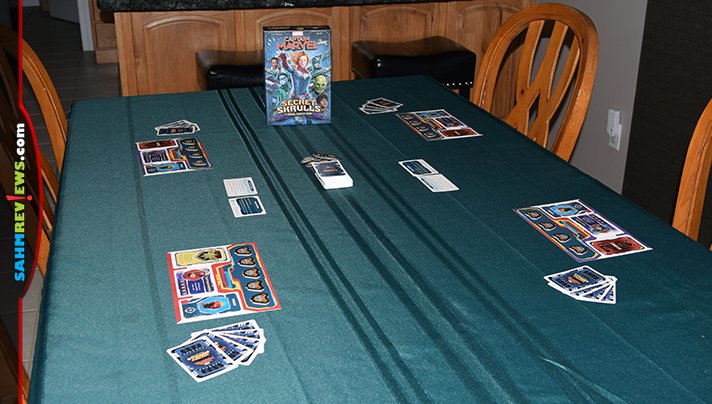 Captain Marvel: Secret Skrulls is a hidden identity party game much like Ultimate Werewolf, Deception: Murder in Hong Kong and Escape the Aliens in Outer Space. Except this is a Marvel-themed game so you’re relating to known characters instead of generic werewolves, aliens and detectives. Setup varies based on the number of players from 4-7 people. Games like this are always better with the full compliment of participants so keep that in mind when you’re preparing to play. One player will be Captain Marvel, 2-3 will be Skrulls, 0-2 are allies and 1 will be a Skrull Defector. Shuffle all the character cards and give one to each player. Everyone keeps their role secret because the game wouldn’t work if you didn’t! Give everyone a player mat, one Punch weapon, then give each player a Character Identity Card and Health Tokens as referenced on their character identity card. Shuffle the playing cards and give each player as many as they have health tokens. All remaining cards are placed in the middle of the table to use as a draw deck. 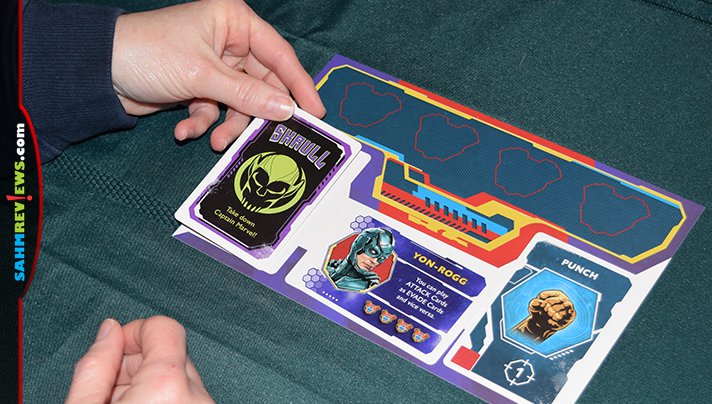 Note that there’s a difference between a role and an identity. The role references the Alliance as Skrull, Skrull Defector, Ally or Captain Marvel while the Identity cards are character names like Phil Coulson. The character identity is public information while the role is kept secret. Each identity has a unique special ability and the amount of health of each player varies as well. The goal of Captain Marvel is to eliminate all the Skrull and the Skull Defector to bring balance to the universe. Captain Marvel’s Ally is trying to help and protect her at all costs. Skrull are working to eliminate Captain Marvel and the Skrull Defector simply wants to be the last one in play. 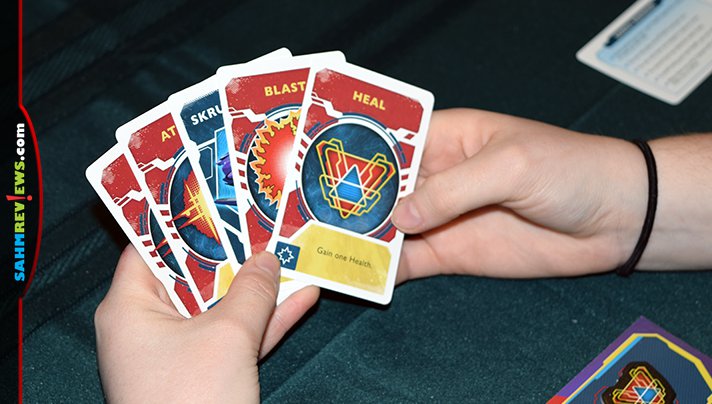 You’ll begin with Captain Marvel and work clockwise. On your turn, you’ll draw two cards, play as many as you like (with a maximum of one “attack” card) then discard excess cards to get to your hand limit. Cards allow you to attack someone else or help yourself. 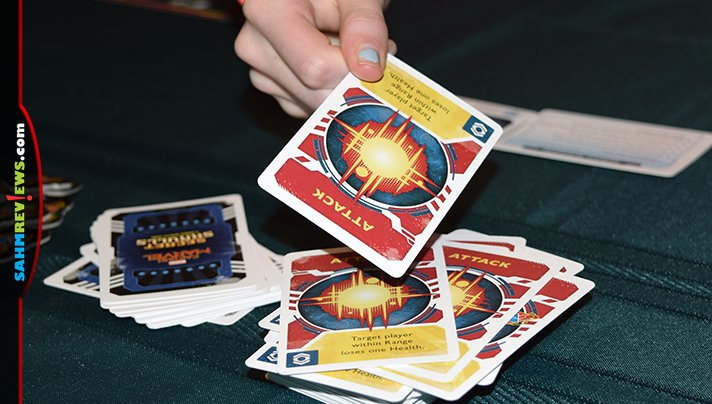 There are red cards (play and discard) and blue cards (equipment and weapons). If you play a red card, you place it face up in the discard pile and take the noted action. The red cards include things like Heal, Attack, Evade and a variety of other cards that cause opponents to discard, allow you to draw more cards or let you steal cards from another player. Most of the cards are played during your own turn but some are defensive and can be played out of turn. 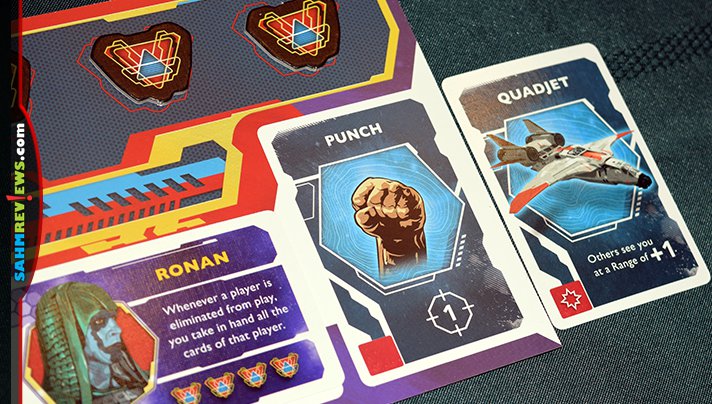 Blue cards are placed face up in front of you to denote the item being equipped. When you begin the game, you’re able to attack using a punch action which allows you to reach someone who is right next to you. Additional weapons increase the distance you’re able to reach to attack or impact other players. In a 4 player game, this isn’t as big a deal, but in 7-player game, you’ll need better abilities to be able to take out the opponents that will get in the way of you claiming victory!

There are some fun blue cards including Goose (you know, the cat from the movie) and a “captured” card that have special effects. If you’ve seen the movie, you know the importance that Goose plays in the Marvel story. If you haven’t seen the movie, well, let’s just say Goose is not your typical cat. 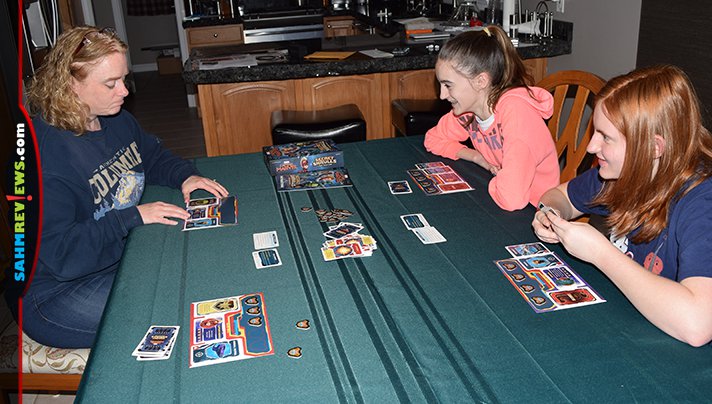 At the end of your turn, discard any excess cards above your hand limit which is equivalent to the amount of your health at that time. Play moves to the next player. At any point that you lose your last health, your character is eliminated from the game unless you’re able to play a Heal card.

If not, you’re done. Reveal your hidden Alliance (role) card then return all the cards from your hand and play area to the discard pile. The game ends when either Captain Marvel has been eliminated or all the Skrull and Skrull Defector are eliminated. As I said before, it’s possible with four, but definitely more fun as you add people to the mix!

While hidden role games have the same general mechanics, this one may sound very similar to Bang. We actually featured The Walking Dead dice game version of Bang several years ago. It’s the same game but with cards instead of dice AND it’s Marvel. This is a great party game for Marvel fanatics and is available on Amazon for under $25. Be sure to grab a copy while USAopoly is still making them. They regularly offer licensed games, but once their license expires, it’s much pricier to add to your collection. If you want to know what TheOP will be licensing next, follow along with them on Twitter and Facebook! If you’re a Game of Thrones fan, you’ll want to stay tuned!

Who is your favorite Marvel character?