One of the more “interesting” things about growing up with the last name of Brady was how we were constantly compared to the popular TV show, The Brady Bunch. At various times of life I was called Greg, Peter or Bobby, probably depending upon my age at the time. It didn’t help that I (along with thousands of others) had a crush on Marcia. At one point in my adult life I had the opportunity to meet my TV-brother at a baby convention in Los Angeles. I wasn’t sure if I wanted my photo taken with him or punch him in the face for causing me so much torment in my youth!

I chose the photo… 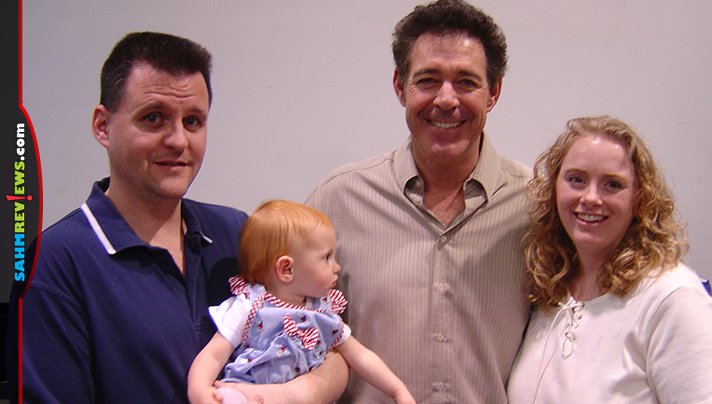 Fortunately that doesn’t happen much any longer. We had a discussion with our pharmacist recently (who is much younger) and he had never seen an episode of The Brady Bunch! Instead of asking us which Brady we were related to, instead he inquired if we were somehow related to Tom Brady of the New England Patriots! Ok, we’ll take that association!

The memories of enjoying an episode of The Brady Bunch came rushing back when we recently played Big G Creative‘s The Brady Bunch Party Game. We first saw the game at last year’s Gen Con convention in Indianapolis and even got to meet Cousin Oliver who was in their booth demoing the game! Given our history with the name, it was one we had to play. 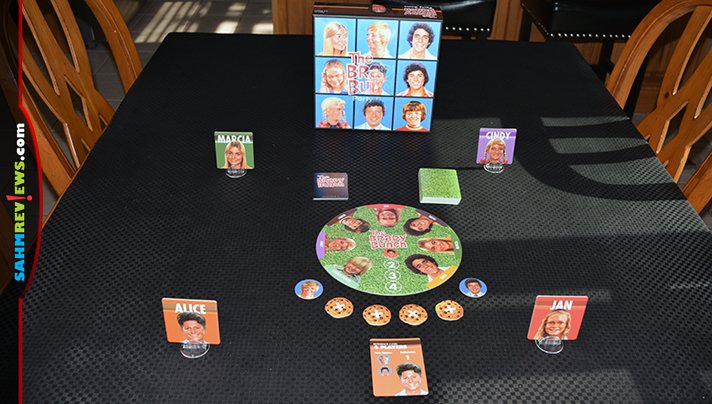 The Brady Bunch Party Game is a semi-cooperative social deduction game where Alice is trying to identify which of the Brady kids is the troublemaker. She will use poignant questions and cookie bribes to try to discover which of the kids has been causing the most trouble. Alice will also get the help of a tattletale who will spill the beans about what other players are playing!

To set up the game, place the game board in the middle of the table and choose which person will play as Alice. That person receives the Alice tile and base, cookies and a Reference card. This Reference card has additional information about the game setup depending on the number of players. All other players choose a Brady kid to play and take the corresponding tile and base and place it in front of them.

From the deck of Snoop cards, remove any depicting characters that were not chosen (2 of each) and shuffle the rest into a face-down draw deck near Alice. The deck of Mischief cards are also shuffled and three cards dealt to each Brady kid. These may be looked at, but should be kept secret from all other players. The rest of the cards are placed near the game board forming a draw deck. 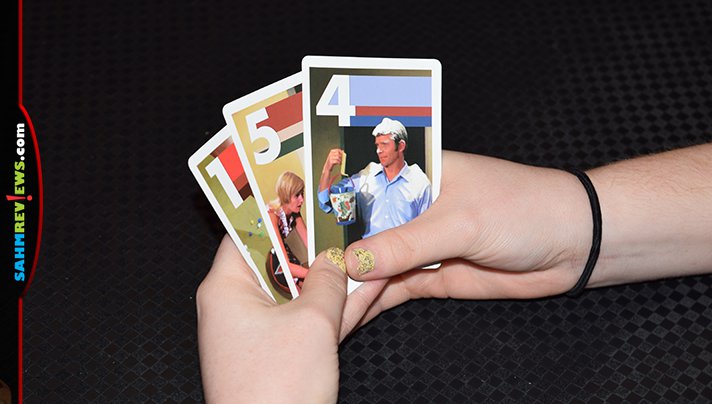 Unlike other social deduction games like One Night Ultimate Werewolf or Deception: Murder in Hong Kong, most players do not know their role. Alice is the only person at the beginning of the game who has a goal – to find the troublemaker. The Brady kids will end up being a troublemaker, tattletale or sidekick depending upon the cards they play during four rounds. Higher numbered cards played brings you closer to being the troublemaker, while lower numbered cards means you are more likely to be the tattletale. Alice must determine who is what. 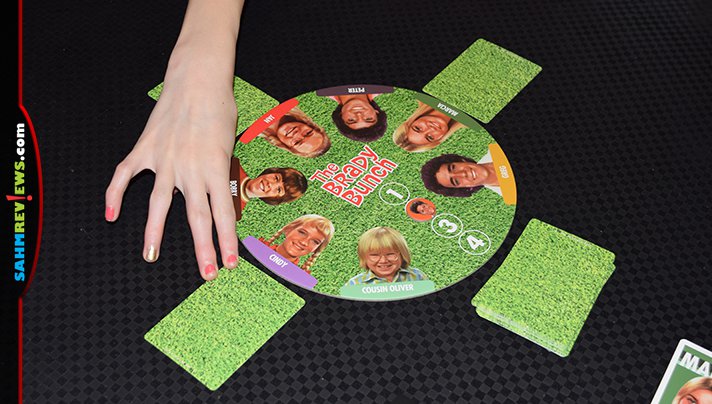 At the beginning of each round, Alice will reveal Snoop cards from the deck depicting photos of the Brady kids. All kids then select one Mischief card from their hands and place it in front of them, face-down. In order of the Snoop cards drawn, kids get a chance to peek at another kid’s played card while everyone has their eyes closed (and humming the Brady Bunch theme). 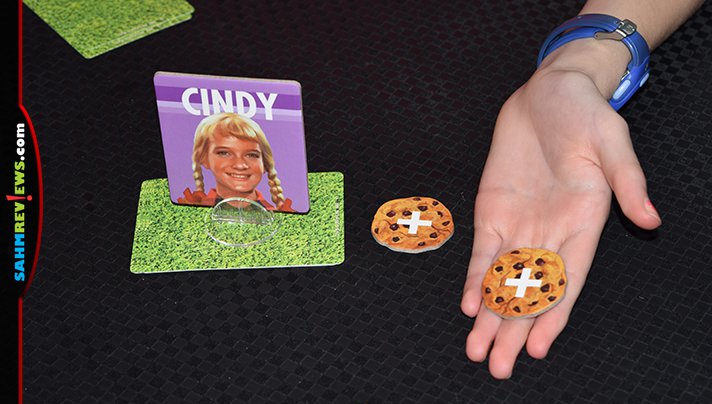 Alice then gets an opportunity to ask questions of the kids trying to find out who played what. The kids do not have to answer truthfully and may or may not provide valid information. Alice may reward one kid with a cookie every round which allows them to then look at a Mischief card played by another kid (just like a Snoop card). Alice may also submit a help token, which allows her to also look at a card. This may verify the truthfulness of a kid or give information about which role a player is vying for.

After everyone has finished peeking at cards, the round ends with the Brady kids putting their played card underneath their character stand and drawing another card into their hand for the next round. After the end of the fourth round, all unused Mischief cards in players’ hands are returned to the deck and the Snoop cards are cleared away.  Alice counts to three and all players in possession of a cookie reveal at the same time whether they want their cookie to add or subtract from their overall score. 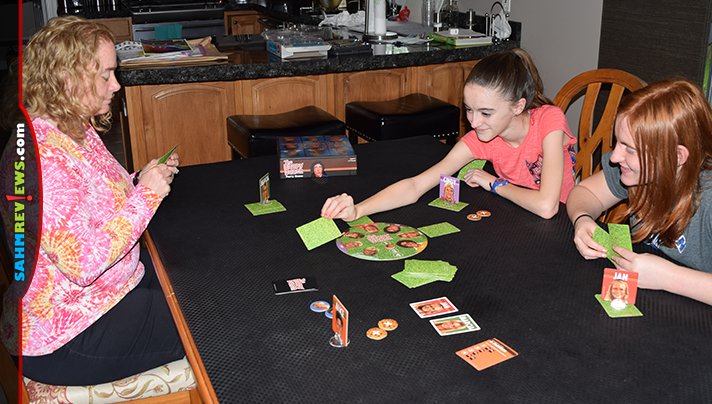 At this point Alice must select the kid she believes is most likely the troublemaker by selecting their photo from the Snoop deck and placing it face-down on the game board in the Accusation space. Moving clockwise, each Brady kid reveals the four cards underneath their player stand and adds up the numbers, remembering to add or subtract for any cookies. The character tiles are arranged on the game board in order from lowest to highest according to each kid’s total. The child with the highest score becomes the troublemaker and the lowest is automatically the tattletale! If tied, both players take on the role! If Alice correctly guessed the identity of the troublemaker, Alice and the Tattletale win! If she was incorrect, the troublemaker and all sidekicks are victorious! 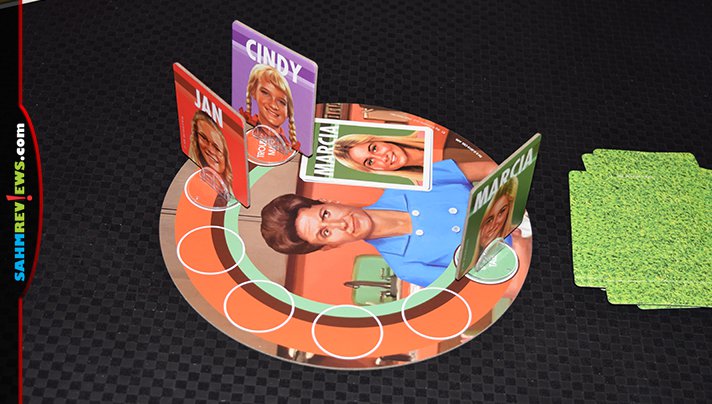 For the first few games, the role of Alice should be played by an adult as it is the most difficult. The Brady Bunch Party Game supports up to eight players (six kids plus Cousin Oliver along with Alice) and plays in around 20 minutes. Like our pharmacist, younger players may not be familiar with the TV show, so make sure they catch up on reruns before diving into the game!

You’ll find The Brady Bunch Party Game on Amazon or at many big box retailers for a very good price. See what else Big G Creative has on the schedule by following them on Facebook or Twitter. Also check out their website for details about where they’ll be demonstrating their entire line of nostalgic games!

Which Brady kid would you want to be?