As we sat at a restaurant with Kennedy for lunch a couple weeks ago, she was telling us about a project she had to do for history class. Despite being an end-of-the-year assignment during a very stressful final couple weeks, she was extremely excited about it. The project involved her and a partner listing ten artists or bands who were instrumental (see what I did there?) in shaping the music of the 1980’s. Kennedy had told us they were concerned when they first received the project details, explaining that she didn’t think she knew much from that time period. Then they started researching artists and songs from the era and her attitude quickly shifted. Between performing several over the years as a choir, orchestra and band student and having parents that listen to the “oldies” in the car, she discovered that she wasn’t as unfamiliar as she originally thought. She realized she knew quite a few and emphasized that she knew a LOT of them.

Scott and I were curious what was in the running for their top spots so we asked. Her list included Beat it from Michael Jackson, Don’t Stop Believin’ by Journey, and You Spin Me Right Round by Dead or Alive (which she knew from Alvin & the Chipmunks). Then we proceeded to discuss the variety of bands, solo artists and songs and asked if she as familiar with them. Her eyes lit up and she offered multiple responses that included, “I forgot about that one!” and “Ooh, that’s one we played in band.” The discussion persisted through lunch AND all the way back home. The timing couldn’t have been better because we happened to receive a prototype of the Total 80’s edition of Paraphrase from Flying Lemur Game Studio. What I thought might be too off-topic for the girls ended up being more on target than I expected. 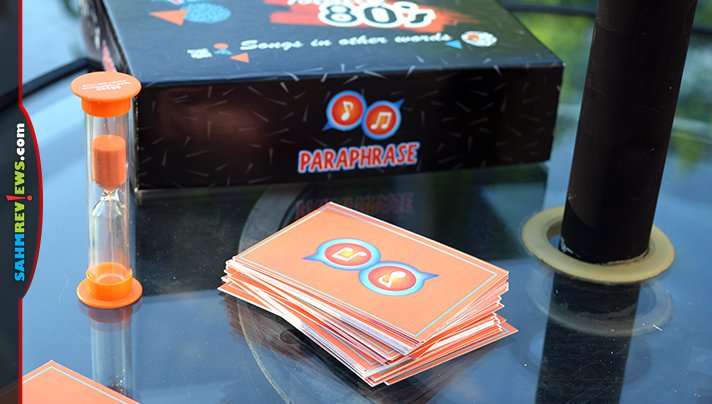 Paraphrase is a party game that can best be summed up by its tagline, “Songs in other words”. If you remember watching Name That Tune on network television, then you’ll totally appreciate this one. But instead of bidding down how many notes of a song you can hear and still decipher the tune, Paraphrase gives you a paraphrased (hmmm, that’s interesting) description and your job is to figure out the title it refers to.

Here’s one for you! “Dispense an unspecified amount of glucose upon my body.”

Setup is simple. Divide all the players into teams of two. You can play with as few as four people but it’s best when you increase the number to 3-4 per team. Shuffle the Paraphrase Cards and form a draw stack in the center of the table. Place the dry erase scoresheet and marker as well as the point total pad in the center of the table. You’ll also need a timer of some sort. Our prototype included a sand timer but future versions will encourage use of a phone or tablet. 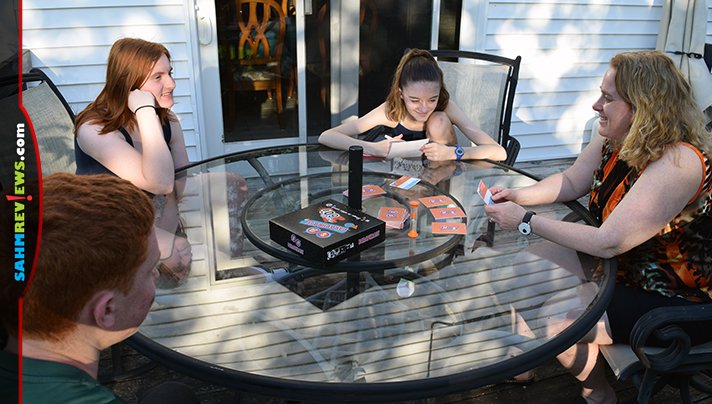 You should predetermine the number of rounds you want to play but it’s encouraged that it be enough rounds for everyone to have a chance at being the clue giver at least once. The scorepad is pre-printed with the option for 10 rounds but it works fine with fewer rounds as well. Personally, shorter games allow teams to be mixed more often allowing more social interaction between the players. It’s a party game after all so you want to encourage people to mingle. 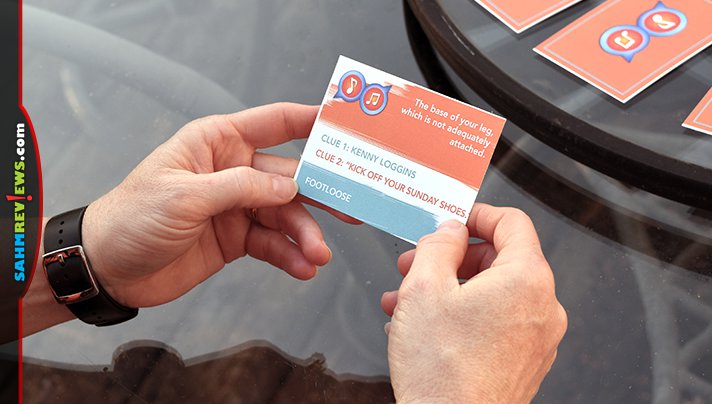 To begin a round, select a team to be first. The opposing team will be keeping score as well as reading the questions from the cards so designate those individuals at the start of each round. Take five Song Cards from the draw pile and place them face down on the table. Set a timer, then the reader from the opposing team will begin by paraphrasing a song’s title. 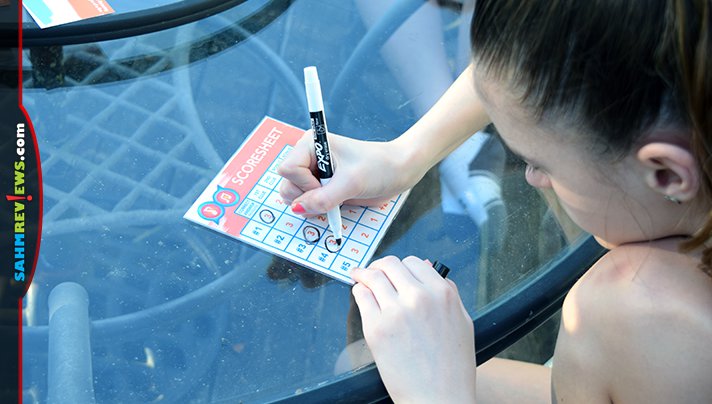 The active team will have the opportunity to guess the title of the song and earn three points in the process. If they are stuck, they can opt for a clue and accept only two points for guessing correctly. A second clue is available as well but reduces the points awarded further making this answer only worth one. In addition, teams can earn three bonus points for breaking into song and performing their designated tune. If they were able to identify the title without any clues, teams can earn two additional bonus points for identifying the artist behind the song.

Name this one and the artist, “The moment in time that small pigeons utter loud sounds.” 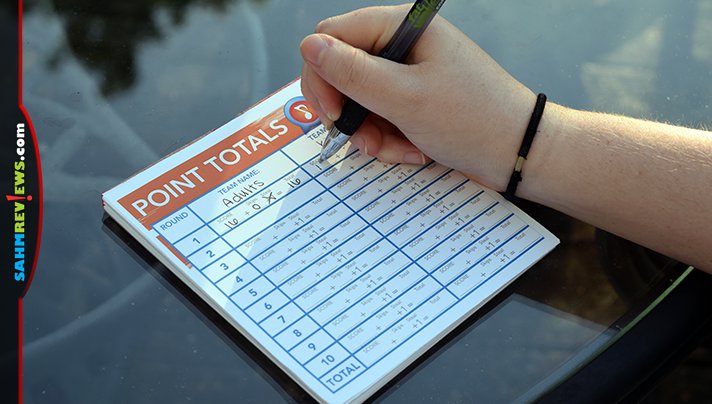 When a team has successfully identified and earned points for a song, the reader grabs another of the five cards and the process repeats until the timer runs out. If there’s a card in play when time has expired, members of the opposing team (with the exception of the reader) are allowed to steal the points by providing the correct answer within five seconds. They’re also able to steal bonus points! The teams switch roles with the active team now reading and keeping score while the opposite team attempts to earn points for guessing the paraphrased songs.

After the designated number of rounds, points are scored and the winning team is determined. As I mentioned before, double down on the fun by mixing up the teams up and giving it another go! While teams can consist of players of different ages and abilities, it’s best if teams have a well-rounded knowledge of the genre of songs. The more people playing, the better.

Our pared-down 80’s-themed prototype was just the tip of the iceberg. Flying Lemur Game Studio will launch the Kickstarter for Paraphrase tomorrow with plans to release a 208 card base game with songs from the 80’s. In addition, the Kickstarter will include 104 card expansions for The 70s, The 90s, The 00s, Country Hits and The Mix Tape. If you choose to back the Paraphrase Kickstarter, an All-In Pledge will provide you with the base game and expansions that offer a total of 780 cards. Now, I know school is out for the year but if you’re doing the math, you’ll notice that a base of 208 cards plus 5 expansions of 104 cards each only totals 780 cards. That’s because there’s a 52 card set that will only be available through the Kickstarter. The limited 52 backers at this level will send their signature to Flying Lemur Games and it will be used as part of the artwork on the cards in this pack. This “Double-Super-Exclusive Guest DJ Pack” will not be available at retail, at conventions or online anywhere else.

So you’re probably wondering how much this is all this going to set you back. Don’t worry, you have options. You can pick and choose which expansions you want or you can go all in for all of them. The Kickstarter will include an option for the base game for $25 or get the base plus one expansion pack for $30. Base plus 2 expansions is the option at the $40 pledge level while an extra $5 gets you one more. If you opt to back at $55, you’ll receive the base and all the regular expansions. The Exclusive Guest DJ level rings in at $75, a small price to pay for the opportunity to have a game personalized. Can you image your kids, grandkids or friends playing Paraphrase and seeing your name and signature in the deck of cards?! It will be an instant family keepsake – or perhaps a great gift idea!

Did you figure out “Pour Some Sugar On Me” from Def Leppard and Prince’s “When Doves Cry” from the paraphrase?

There are future expansions in the works that include 1 Hit Wonders, Movie Themes, TV Themes, Bubblegum Rock and more. The Paraphrase game Kickstarter will run until July 14th with a planned delivery of 1st quarter 2020. While it isn’t slated to arrive on Amazon yet, you can pick up other games from Flying Lemur Game Studios such as North American Railways.

Paraphrase is a nice alternative to traditional trivia games while still offering that same holy-cow-I-know-that-answer feel. You can play it as a party game, but we had just as many laughs with one person reading the cards and everyone else bantering to try to figure out the songs. We definitely saw everyone’s strengths and weaknesses emerge! The diversity of expansions makes it a good party game choice for a variety of ages and the bonus points for belting out the song is sure to resonate with your friends who can’t resist the lure of karaoke!

How would you paraphrase your favorite song?