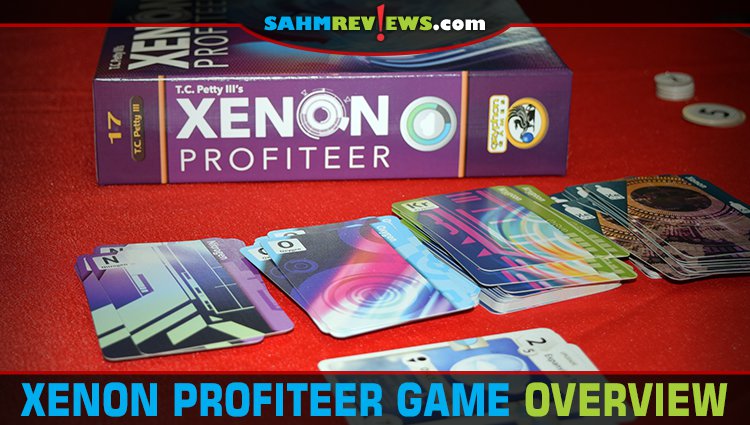 I stand corrected. For quite some time I had the misguided notion that all deck-building games were the same. At least that had been my experience. Every time we played one, the rules were the same. Draw cards from your deck, spend them to upgrade (or sometimes attack other players, as in Hero Realms), discard them and draw your new hand to prepare for the next turn.

No matter the theme, this is the way nearly every single deck-building game I’ve played has operated. Maybe there would be a small twist on what you were buying or how you interacted with other players, but the base mechanic was the same. This made it easy to jump into a new theme, but also meant we would tire of it quicker. Or at the very least be easily distracted by the next entry into the deck-building genre.

Repeating what I said earlier, “I stand corrected”. I erroneously assumed that Eagle-Gryphon Games‘ Xenon Profiteer would be another example in the long list of games following the traditional deck-building model. And while parts of it did feel familiar, the actual gameplay was refreshingly different. But first, the backstory. 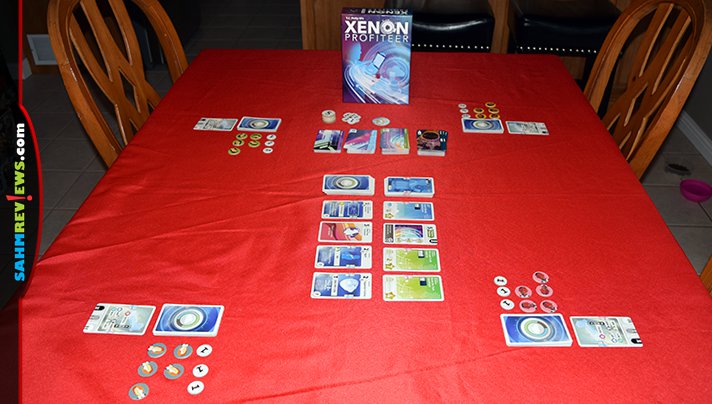 In Xenon Profiteer, you and up to three other players are vying to be recognized as the most influential supplier of Xenon, a valuable noble gas. You are building and upgrading your personal Air Separation Facilities while fulfilling contracts to fund your expansion. The player who best balances their construction and manufacturing will ultimately be the most successful and the winner of Xenon Profiteer.

Inside the box are over 200 playing cards, bid tokens in five player colors, coins and one Privilege Token. The cards are separated into different piles to set up the game. The four elements (N, O, Kr and Xe) are stacked into their own supply piles while the Upgrade and Contract cards are shuffled into their own decks and placed into the center of the play area. Four of each of the Upgrade and Contract cards are dealt out to the side of their respective decks, forming the available supply. Each player begins the game with two of each element cards in their deck along with two starter Upgrade cards and a Central Console card, where everything they do will be connected to. 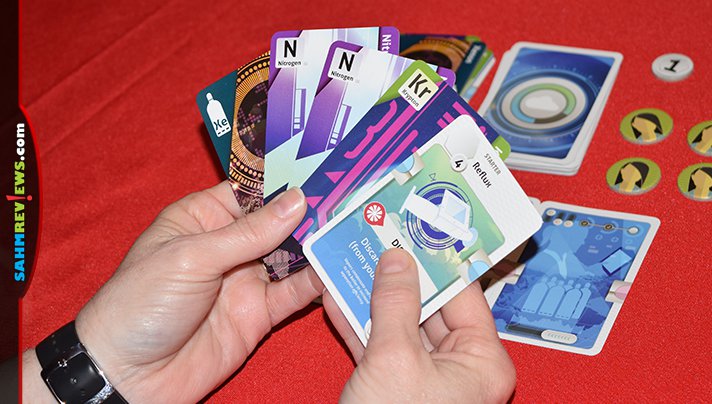 At the beginning of the game the hand limit is five cards and all players will begin by shuffling their 10-card deck and drawing five into their hand. The Central Console card also acts as a reminder of the actions you’ll take on a turn. The main objective of Xenon Profiteer is to isolate the Xe element, and to do so you must distill your hand to eliminate the unwanted isotopes. Your first action is to Distill, and this removes all instances of one element from your hand in the listed order (N first, then O, then Kr…). These are removed back to their respective supply piles and out of your deck. If you are able to eliminate all other elements from your hand and leave only Xe card(s), you may immediately place them under the right-most card attached to your Central Console to be used at any later time. 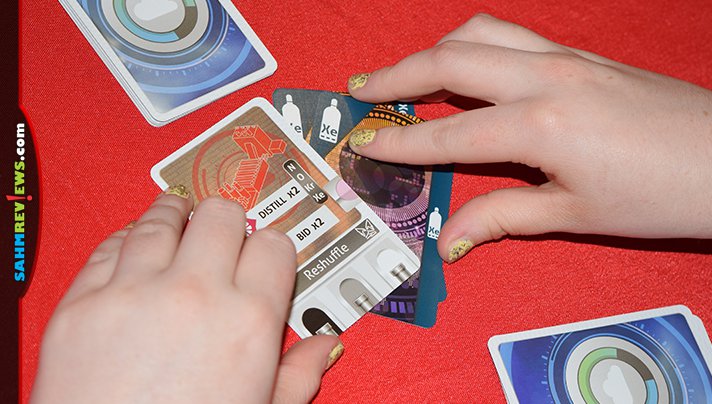 Your next action gives you a choice of AIR or WIPE. Choosing AIR allows you draw one complete set of elements from the supply and add them to your discard pile and receive $2. You might be thinking, “Why do I want more in my deck when I need to get rid of them?” This is the only way to get additional Xe into your hand and you must process the AIR over subsequent turns to isolate it for use. WIPE allows you to discard all cards in either the Upgrade or Contract row and replace them with new ones, with the exception that cards with tokens on them cannot be wiped. 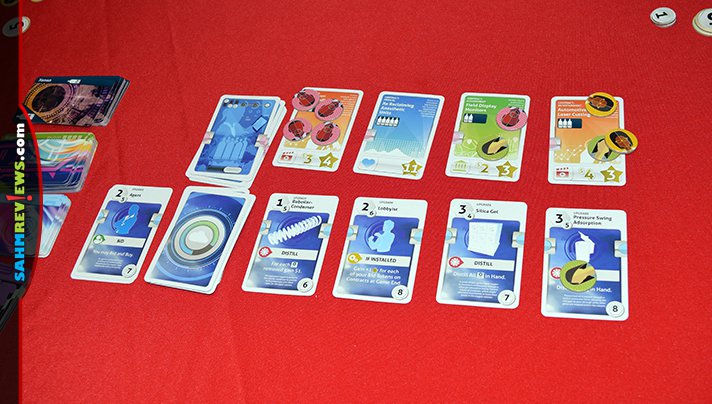 Lastly, you have another choice between BUY or BID. To BID, you take one of your five tokens and place it on any of the cards in the supply. This increases the cost of the card to other players and prevents it from being wiped from the board. You may BUY any card in either row by paying the listed price in the upper left corner (Contracts are free) and paying $1 to other players for any of their tokens on the card you wish to purchase. If your own token is on the card, you will receive $1 back from the bank! Upgrade cards are placed in your discard pile, while Contracts are set to the right of your Central Console to be filled. You may also choose to pay the full price listed in the bottom right corner of an Upgrade card to install it to your console instead of putting it into your deck. This will allow you to take the listed action every turn instead of waiting until you randomly draw it from your deck and play it once!

One other type of card is available in the Contract deck other than just contracts. Piplelines are a special type of upgrade that have only a single price. When purchased, they are placed below your Central Console and line up with the matching shade of pipe. You may only have one of each shade (for a total of three) and are both worth points at the end of the game and allow you to increase your hand limit size by one for each connected pipeline! 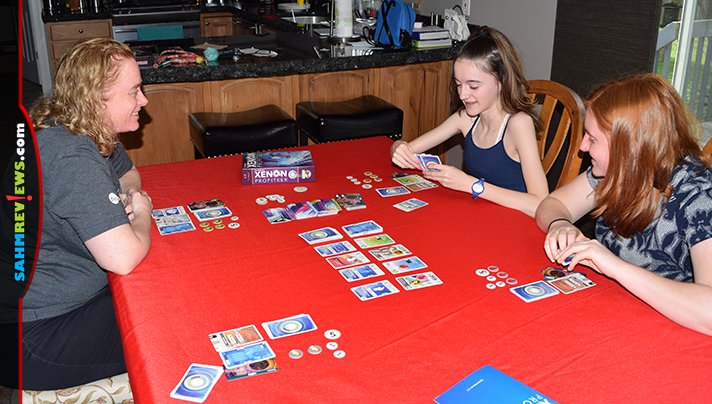 You can also elect to turn over your Central Console card to display a different sent of action options. This would allow you to Distill twice (and still placing any leftover Xe element cards into storage) and Bid twice. This action may not be taken on consecutive turns, so on the next turn you will have to take the standard actions on the face of the console card.

Any time you have enough Xenon to fulfill a contract, you may do so and turn over the contract card to make room for a new one. Used Xe cards are returned to the supply and you’ll receive any monetary rewards listed on the card immediately. Points depicted will be awarded at the end of the game. 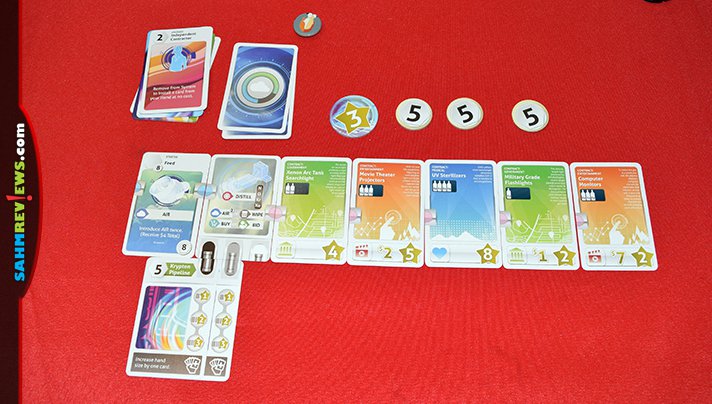 A game of Xenon Profiteer continues until one player either constructs their fifth upgrade or completes their fifth contract. That player receives the Privilege Token and has the choice of taking three points or getting an extra turn. In either event, all other players get one more turn to complete any contracts or construct further upgrades. Once all players have made their final choices, scoring commences.

Players receive one point for each upgrade they have in their system, points for their pipelines (one, four or nine), points listed on their completed contracts, end-game bonus points as depicted on Upgrade cards and one point for every $5 they have leftover. The person with the highest point total wins Xenon Profiteer!

If you’ve followed along, you can certainly see how Xenon Profiteer differs from other deck-building games on the market. The unique method of removing worthless cards from your hand (Distill) yet the need to add them back (AIR) to get the one element you need makes for careful planning since you can Distill out multiple cards at a time if they match. Well-priced on Amazon and at your favorite local game store, even if you consider yourself a deck-building expert, it is definitely worth adding to your collection.

Xenon Profiteer is part of Eagle-Gryphon Games’ Bookshelf Series, similar to their highly-popular EGG Series. This is the first one in this series we have played, and if it is representative of the quality of the other titles, we’ll be looking forward to trying out the others! Follow Eagle-Gryphon Game on Facebook and Twitter to find out what the next game in the series will be!