As you may have noticed from details about my visit to the headquarters of Pixar, Netflix, Nintendo, Dr. Pepper Snapple and Domino’s, walking inside the ropes at a PGA tournament and being on the sets of TV shows, I find it fascinating to go behind-the-scenes to see how things work. While some people expect it to be like the Wizard of Oz and feel deflated by the results, I find it exhilarating to see how unique things are as well as their normalcy. Many things are unique to each industry and that’s the really cool part. But business is business. There are meetings and break rooms, storage spaces, bills to pay and phones to answer. Seeing the normalcy is a nice reminder that the people who run these places are just like us.

Last month while attending Geekway to the West, we had a chance to swing by and say, “Hello” to some of our board game publishers at their home-away-from-home. John from Genius Games agreed to take us on a tour behind-the-scenes of the facility they share with Grey Fox Games. Check it out! 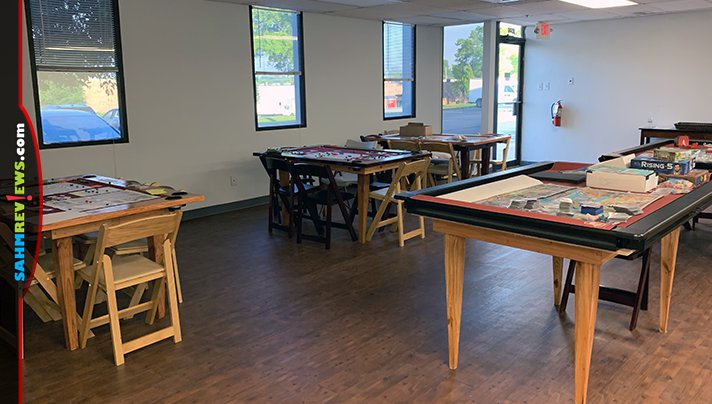 We showed up on a Wednesday evening well past normal working hours and quickly discovered that all bets were off. Before all of us had entered and well before we had time to examine the demo room that makes up the lobby, we were met with a Nerf dart zooming past us. Creativity is king at many companies, especially board game publishers who are constantly working to perfect and then release the next title for your entertainment. You might find it kind of odd to hear of Nerf darts in a workplace, but I’m sure it helps them rejuvenate when they need a brain break. When we were done laughing about the target practice, we surveyed the demo area filled with tables showcasing a variety of prototypes that were mid-play test. For those who aren’t familiar with how a board game comes to market, it doesn’t go straight from the mind of the creator to the manufacturer to the shelves at the store. There is a lot that happens in between all those stages including hours of playtesting to make sure it’s balanced, fun and has the rules all ironed out. I’ll get back to that in a minute. For now, let’s continue the tour… 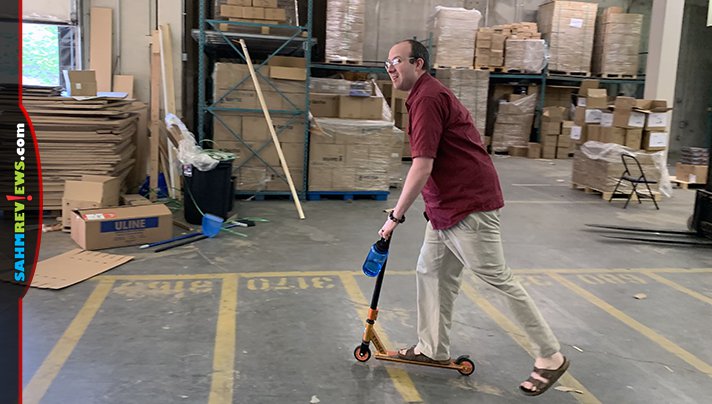 After chatting for a bit, we headed on a tour which included the storage area and loading dock. We saw pallets of several games we were familiar with and spotted a couple cases of Genius Games’ line of first science textbooks. Game publishers handle their storage in different ways. Some keep it in a connected warehouse like this, others pay another publisher for shared storage and some have distributors handle the storage and allocations. 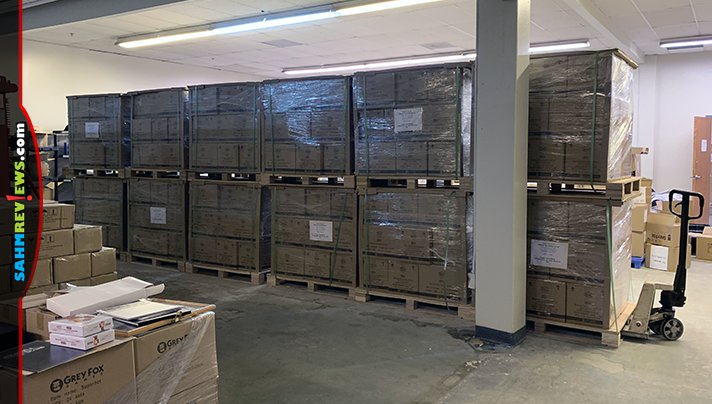 In this case, Grey Fox Games and Genius Games store their own products as well as some games for Stonemaier Games. (Sorry, no Wingspan available though. Believe me, I looked!) The synergy between board game publishers is always interesting to see. Sometimes it’s behind the scenes like sharing offices or storage. Other times it’s right there in front of us as demonstrated by Calliope Games’ Titan Series which includes games from iconic game designers who work for other companies, 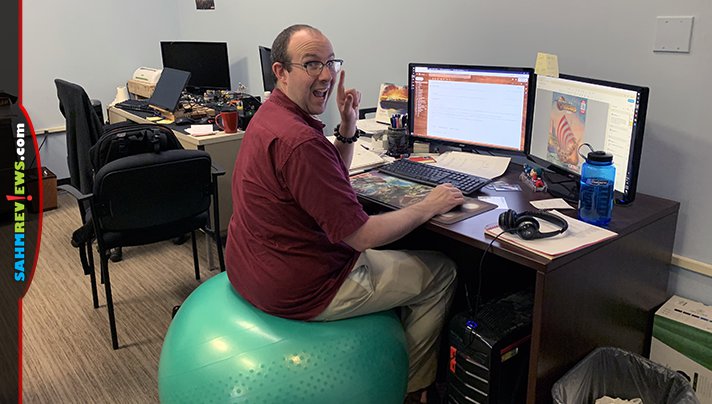 But let’s take a minute to talk about office work. Josh from Grey Fox Games ditched a computer chair for his workstation and uses dual monitors. There’s a dry erase board on the wall next to him but I promised I wouldn’t show it. You know, super secret stuff and all. Just kidding. It wasn’t super secret, it just had a lot of information like release dates, shipping dates and other random information. 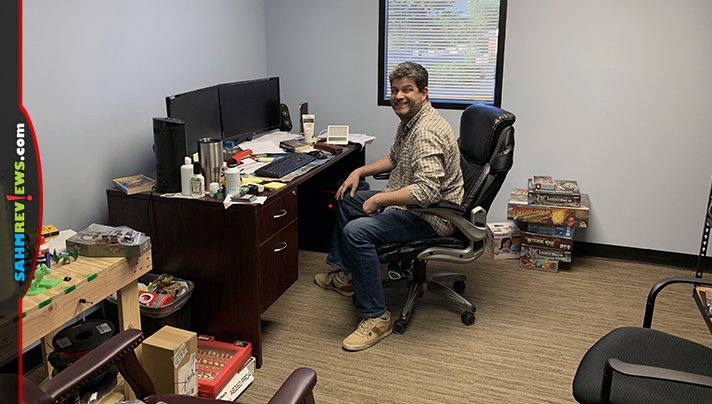 Of course, we can’t forget about Shane. Why? Aside from the fact that he’s the boss over at Grey Fox Games, his office is where the 3D printer is. These printers have revolutionized things for inventors and creators by allowing them to see their ideas in real life. For board game designers and publishers, 3D printers allow them to fabricate custom pieces to use when developing their games. 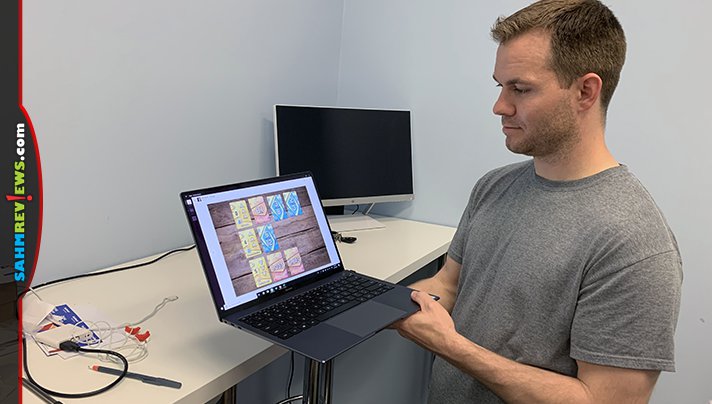 While John from Genius Games, on the other hand, opted for an office space with bright lighting, standing workstations and plenty of supplies for creating and improving their games. A laptop is a must as well since publishers spend a lot of time out of the office at board game conventions, meeting with suppliers, demoing games at meetups and working from home. One surprising fact from John is that they have daily team meetings in the office and utilize trinkets that are stashed throughout the room as inspiration and motivation. 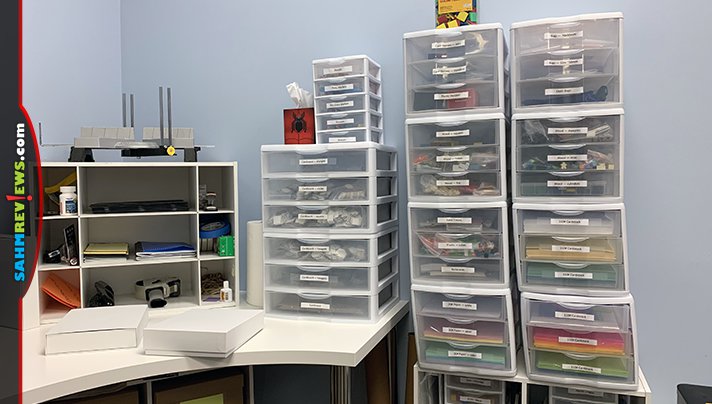 As I mentioned before, a game has a lot of steps to take before becoming the product you open and set on your table. Sometimes there’s only an idea and the game itself needs to be built completely from that. In addition to use of a 3D printer, Genius Games has a section of their office that’s complete with all types of components that can be used to help create a game. There was a storage unit that included different colors of card stock, wooden bits, glass components, different types of dice and various shapes and themes like animals and space. 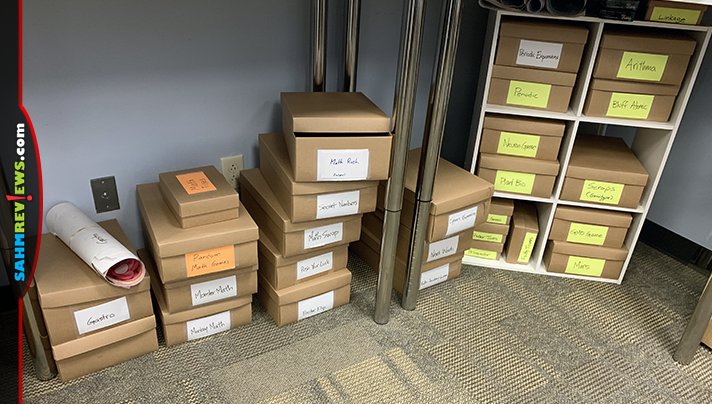 Finally, we have exciting news for those who are fans of the works of Genius Games. They have no shortage of educational games in the queue. While we were there we spotted games about neurons, Mendelian genetics, the periodic table, GMOs and more. They aren’t ready to make it to production yet, but they’ve made it out of the mind of the creators and that’s a start!

So let’s get back to the discussion about the development process and playtesting. From the time a game idea is put on paper, it can take a few weeks to a few months to get a prototype prepared. Games go through hours, months and sometimes years of testing with different setups, components, rules, player counts and people with various levels of gaming experience. After that, artwork can take a couple of months of preparation and editing depending on the number of unique pieces. All that happens before moving into the manufacturing phase which can take at least a couple months followed by another month for shipping. Genius Games and Grey Fox Games use the demo area in their lobby to test games and get feedback from players. The prototype above is the one I mentioned about Mendelian genetics. As John Coveyou explained it, “(The game is about) Gregor Mendel…how parent traits get passed through offspring in Pea Plants.” It’s not ready yet, but one of these days you’ll be able to get a copy!

From the office to the warehouse and everything in-between (including Madison and Kennedy involved in a fierce Nerf battle with John), we thoroughly enjoyed adding a behind the scenes look at a board game company to our list of adventures.

What industry or company would you like to go for a behind-the-scenes tour?