The girls are at an age where the division between parents and children has the potential to become a chasm. Scott and I decided long ago that parenting would take priority over befriending our children, but that also meant we would need to find more ways to connect with them along the way. Through the years, we have found a number of ways to do that and they almost always involve having fun together. As you know, we often play board games together and watch some of our favorite shows and movies as a family. Traveling to new places and attending conventions have also provided great bonding opportunities. Then there’s the one we don’t talk about as often… video games. Each year for as long as I can remember, video games have made it onto the kids’ birthday and Christmas wish lists. And when I say kids, that also means Scott who has never been afraid to ask for some type of video game… and one that has roots in our family back to when we were kids is Nintendo. 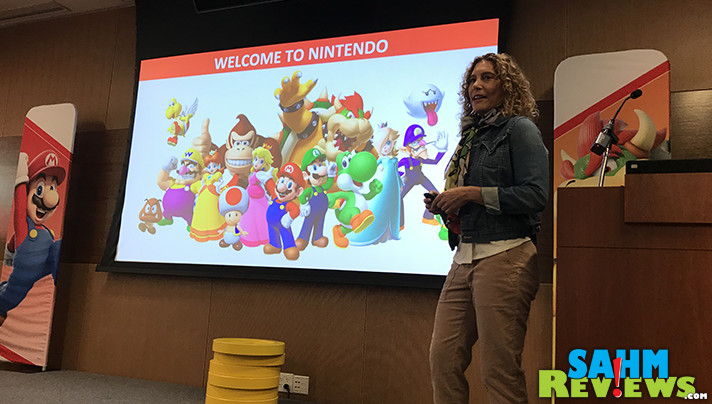 Last month the girls and I were invited by Nintendo of America to attend a blogger retreat in Redmond, Washington. It was a reminder why we are able to connect with our kids: Nintendo helps us be interested in the same things they are! We go on bike rides together to play Pokemon Go, we play Mario themed board games and we work as a team (or not) in 4-player video games. The company that started as a playing card company 100 years ago has expanded to include theme parks while continuing to create cutting edge gaming consoles and we were getting a behind-the-scenes look at some of the latest titles.

The event was primarily focused around the kids and had them involved constantly. They did a scavenger hunt, played a host of new games, competed in a gaming tournament, met iconic characters, heard about Nintendo history and even went shopping in the employee store!

As a bonus, Madison and Kennedy brought along some Mario-themed blind bags we received from K’NEX and were able to record a video with Kit and Krysta from Nintendo Minute for their Blind Bag Babble YouTube channel! 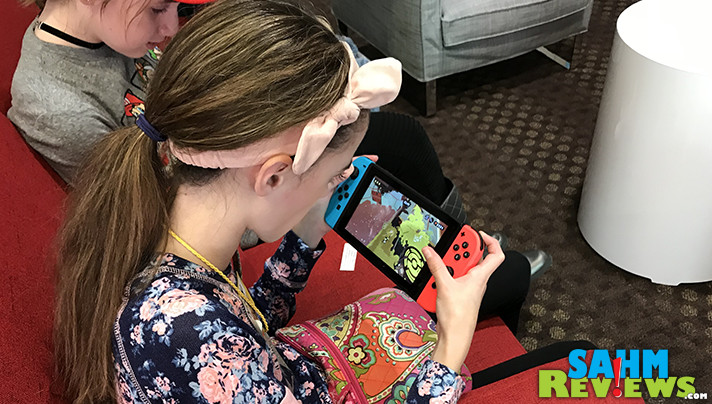 But their specialty is in video games and that was certainly the star of the show. Kennedy couldn’t get enough of Splatoon 2 for the Nintendo Switch. We have Splatoon for our Wii U, but this one had her even more engrossed! The size of the Nintendo Switch console is ideal for her small hands. The Nintendo Switch, which debuted earlier this year, has continued to make inroads with both kids and adults. It has combined the best features of the DS, Wii U and an entertainment system, offers attached but removable Joy-Cons (controllers) and does more than just games. (Psst: You can watch Netflix on the Nintendo Switch!) Working as a handheld unit when on the go, it can be docked and gameplay is projected onto the TV like a traditional console. What makes it even better for parents (and spouses) is the Nintendo Switch Parental Controls App for more convenient parental monitoring via a smartphone. The Switch has regularly been sold out and despite increasing supply, Nintendo still encouraged us to purchase it if we really wanted it. Sure enough, it’s been sold out at retailers this holiday season. If it’s on your wish list, you can look at Amazon, Gamestop and Target for availability. 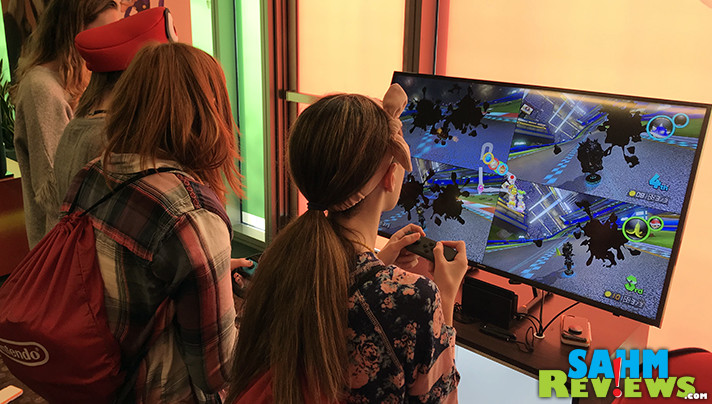 The controllers detach from the base unit to allow more types of play. With Mario Kart 8 Deluxe, they can be added to a steering wheel to enhance the driving experience. With ARMS, one goes in each hand to simulate the two-armed motions of fighting. 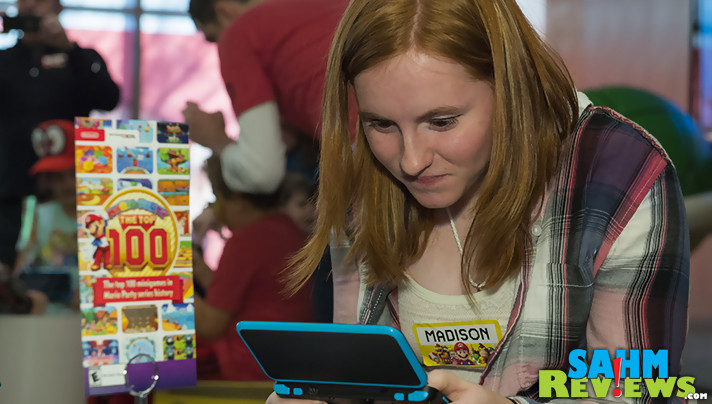 Even with the Nintendo Switch readily available, Madison was drawn to the DS tournament and a heated game of Mario Party The Top 100! She played against her sister and unfortunately only one of them advanced to the next round of the tournament. But it was okay because Madison enjoyed cheering Kennedy on all the way to the finals! In between, she spent a lot of time asking the Nintendo experts about Super Mario Odyssey as well as got the scoop on Pokemon Ultra Sun and Ultra Moon. All of which are huge hits with her high school peers.

Kennedy wasn’t able to pull off a win in the finals, but it was awesome to see all the camaraderie between the kids and the great sportsmanship when they lost. Gaming of all sorts teaches kids these kinds of lessons that seem too often are forgotten on the sports fields.

When asked to share one thing they enjoyed about the event, Madison said “One thing I really liked about our Nintendo of America trip was the fact that all of us got to try out a bunch of games on the Switch. They were really unique and for a person who doesn’t have a Switch, it was cool seeing and playing all the games that you can experience with the Switch.” Kennedy on the other hand said, “One thing I really enjoyed was that we got to try out Just Dance 2018 which was SUPER FUN!” (Editor’s note: Yes, she wrote that in all caps with exclamation point.) Also we tried out the Nintendo Switch! I played Splatoon 2 which was super fun!”

Nintendo continues to amuse and entertain across generations and is an excellent way for families to bond. As we continue our Nintendo Ambassador adventure, we will share more news and updates with you. If you have questions about any of these new games, leave a comment and I’ll get Madison or Kennedy to provide a teenager’s perspective.

Did you have a Nintendo system when you were a kid? What was your favorite game?

15 thoughts on “Gaming with Mario and Friends at Nintendo”