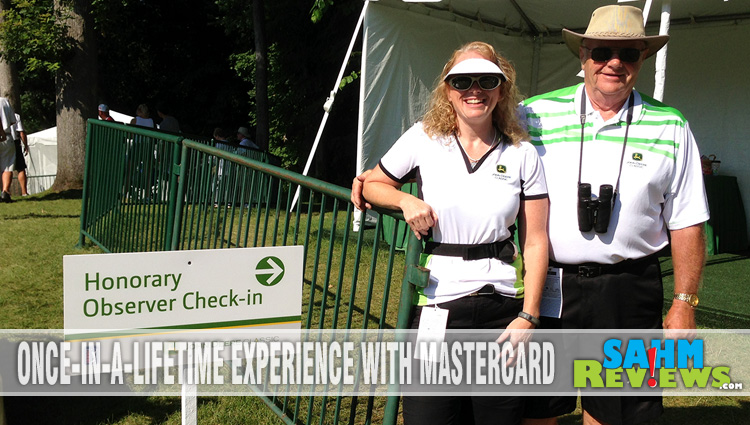 The Grass IS Greener… Priceless Golf

Everyone knows the phrase “The grass isn’t always greener on the other side.” This past Sunday, thanks to the PricelessGolf program reserved for MasterCard holders, I discovered that the grass IS greener on the other side. I’m not saying that in my spoiled-brat-I-want-what-she-has voice. I mean it literally. I know because I stood on both sides of the proverbial fence. Stick with me here and by the time I’m done, I’m certain you’ll agree. I have proof. This past weekend was the John Deere Golf Classic and I was fortunate enough to be able to take my dad on the inside of ropes as an Honorary Observer. In a nutshell, it meant that we would be standing and walking inside the ropes where the PGA golfers, caddies and scorers are. But it started well before we even arrived… A week or so beforehand, I received documentation in the mail that included a VIP parking pass, admission ticket and instructions. A separate package was sent to each of us that included special shirts that we were told to wear for the event. I figured it was just a regular (really cute) event shirt but once I arrived, I realized Honorary Observers were the ONLY ones with that type of shirt. 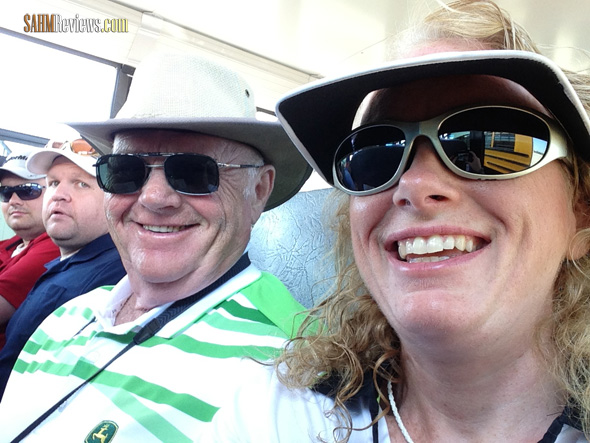 We had VIP parking where we easily parked, had our bags checked and gave our tickets before being shuttled to the event. Once we arrived, we were dropped off right by the clubhouse. We were greeted enthusiastically at the Honorary Observer tent and I have to say I felt like a rock star. I went to take a picture of the sign and they immediately said “Let’s make that even better” took my phone and snapped a photo of us next to the sign. (That’s the awesome photo at the top of the post.) 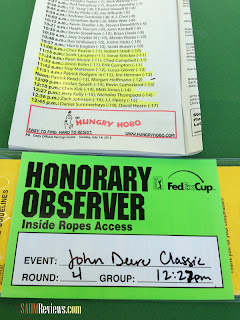 The Honorary Observer booth included sunscreen, bug spray, fruit, granola bars, chips and a variety of beverages to stay hydrated. We were given our name badges and assigned Group number (Tee Time) along with the names of the players we would be walking with: Jerry Kelly and Nicholas Thompson. My dad knew who Jerry Kelly was but wasn’t familiar with Nicholas Thompson. David, who was handling our registration said he could help with that. He immediately walked us down to the first tee (which we only about 15 feet from) and introduced us to one of the PGA officials who was behind the tent. He grabbed the official PGA book and found the players’ biographies. He said it would be everything we wanted to know and more.  David told us a little about Nicholas and how he has a sister who is doing well in the LPGA ranks.

Those little personal touches, like searching for the book, were absolutely priceless. …And we hadn’t even started our day yet! We had quite a bit of time before our group took off. It was the third to the last. One of the leader groups that likely would be followed by the TV crew. I asked David about the Honorary Observer program because I wanted to know more about how it worked from his end. I asked if anyone could call in and purchase an Honorary Observer pass and he said no. They are very limited, given to the sponsors to use as they choose. In our case, we received ours through MasterCard. While they can’t be purchased through the PGA, MasterCard opts to share their allotment with their cardholders through their PricelessGolf program. We decided to check out the grounds, the booths, the driving range and some of the earlier rounds of golfers. At the driving range, we were able to locate Nicholas Thompson.

When we checked out the course and the putting greens, we couldn’t miss the giant scoreboard featuring updates on the players, the standing and details. I certainly noticed the MasterCard logo and even found an ad for their PricelessGolf program in the pairings guide. 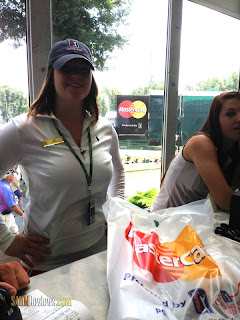 David had said they would hold any personal items for us that we didn’t want to carry around and encouraged us to purchase souvenirs ahead of time. He said many Honorary Observers purchase a flag to have autographed by their golfers. While we were discouraged from interrupting the golfers while they were at work (“Speak only when spoken to” philosophy), he said they make sure we have the opportunity for an autograph when the golfers are done signing their official scorecard. He said he would be at the final hole with our flags ready and Sharpie in-hand. So, of course, we purchased a flag (or two) and my dad even paid for it with his MasterCard! I heard the guy at the checkout say “At the PGA, we prefer MasterCard.” Yes, seriously. But that may have been because he heard me say I was here because of MasterCard’s Honorary Observer program! Plus, I was pretty giddy because I was so excited. I even took a photo of our checker with our MasterCard bag and the logo on the scoreboard behind her. Yes, I’m a dork like that. Thank goodness my dad is a good sport about it. 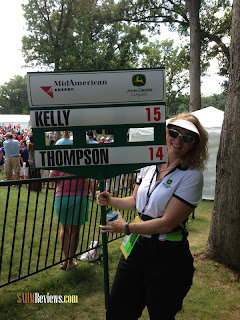 After spending time around the grounds, we headed to our check-in. We arrived at the first hole and were introduced to Leanne, the sign holder for our group. I asked her if I could snap a quick picture of her with the sign and she promptly handed it to me and took my camera. We were in a hurry at this point so unfortunately, I didn’t have time to get my dad into the photo. All that excitement and we haven’t even met the golfers! At the first tee, Nick came up and introduced himself. When Jerry arrived, I heard him ask if there were any Honorary Observers and he turned and greeted us, shook our hands and welcomed us. Before tee-off, we were introduced to the gallery and had our picture taken with the trophy. I’m hoping they mail us the photo because we didn’t receive it onsite. The trophy was cool but I loved the markers for where the golfers tee off. They were little tractors and they were on every hole. It’s the John Deere Classic… of course there would be tractors! 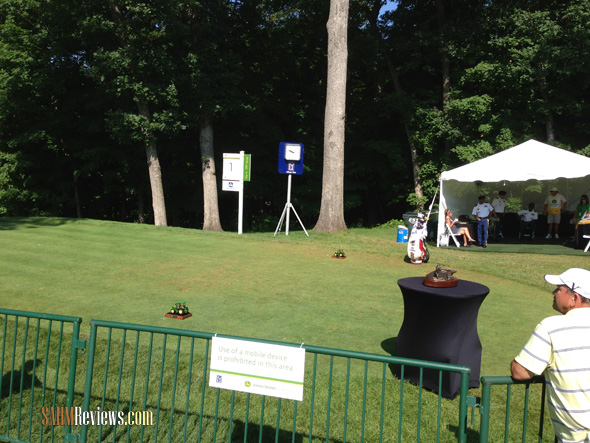 We were given a cheat sheet of where to walk throughout the day and it proved to be extremely helpful. We referenced it at every hole. We would stand by the scorer as the golfer tee’d off but then we wouldn’t walk with them down the fairway. We stayed alongside the ropes. But inside. There are several places where pedestrians cross the course but they kept those gateways closed until the golfers had passed. I was amazed that they also waited until WE had passed… even when we were several yards behind because our route wasn’t quite so straight forward. One pedestrian actually held up a side rope for us to get out because he thought we had accidentally crossed into the course! 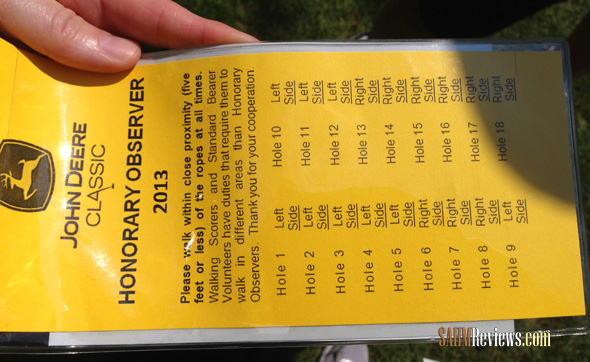 We had the opportunity to listen up close to what the golfers were saying as they prepared each hit and as they watched the ball fly through the air. We were RIGHT there for 18 holes. 18 holes of the best seat in the house. While I would love to share some awesome photos and videos of life inside the ropes, I can’t. Out of courtesy to the golfers while they work, cell phones and cameras weren’t allowed. (Although I did grab this one while we were waiting for the prior group to move forward.)

Told you so. Are you a believer now? To check out all more of my pictures of the event, visit my Instagram page. For more information on the PricelessGolf program, visit the website or catch up with MasterCard on Facebook or either of their Twitteraccounts (@MasterCard and @Priceless). Not a golf fan? Check out the details on additional non-Golf programs as cool as this.

9 comments on «The Grass IS Greener… Priceless Golf»