Each time we get a new neighbor, the very first conversation involves introducing ourselves and asking what brought them to our area. The answer quite often involves how they were relocated for work. In our area, that usually means they work for John Deere. You see, this is home to John Deere’s corporate office as well as factories and the John Deere Pavilion. You may recall me sharing about walking inside the ropes with the golf pros at the John Deere Classic.

It isn’t uncommon to see semi trailers loaded with combines or get stuck behind a John Deere tractor on a country road. You’ll definitely see the signature green color in the fields as well as in yards in neighborhoods everywhere because we support this company that adds so much to our community. From big construction and farm equipment to commercial sized and small home lawn mowers, we love seeing the green.

When I saw Mow Money from Mayday Games, that’s the first thing I thought of. However, the game’s designer, Matt Saunders, actually worked at his grandfather’s lawn mower factory in Colorado the summer between high school and college. During that time, he joked with co-workers about silly items to sell in the company store and he said a board game. In jest at the time, he said it stuck with him and now he’s made it come to life! It just occurred to me that Mayday Games is creating games surrounding household chores. This one is about mowing lawns and the last one was a game about taking out the garbage. Wonder who from Mayday Games worked in the sanitation department (or just refused to take out the garbage at home) to inspire that one!

Mow Money is a game about budding landscape companies who are vying for the city landscaping contract. By placing bids on neighborhood contracts, upgrading their equipment and doing odd jobs, players are able to take on larger and higher paying jobs as well as improve their reputation. There are neighborhoods (equal to the number of players), each with an equal number of contracts that need to be completed. The goal is to be the landscaper with the most reputation when all the contracts for one of the neighborhoods has run out. It can be played solo or with up to six players. The number of cards used varies based on the number of players. 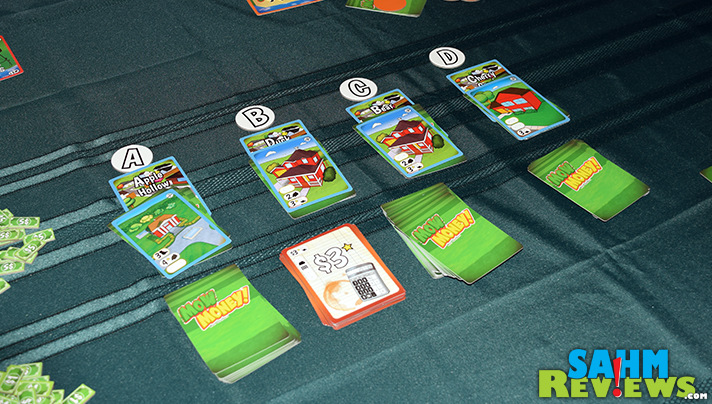 The game is broken down into four phases: Invest, Bid, Resolve and Maintenance. In the Invest phase, players can upgrade their equipment or purchase bid cards. The type of equipment the landscaper owns determines the type of contracts they can bid on and the corresponding cards that are needed. Each neighborhood is soliciting bids for one contract and the requirements for basic, medium and advanced equipment are visible to all players. Utilizing a combination of bid and bluff cards, players secretly place up to two bids on their choice of available contracts. As an alternative, a player can submit zero or one contract bid then commit to an odd job which I’ll explain in a minute. 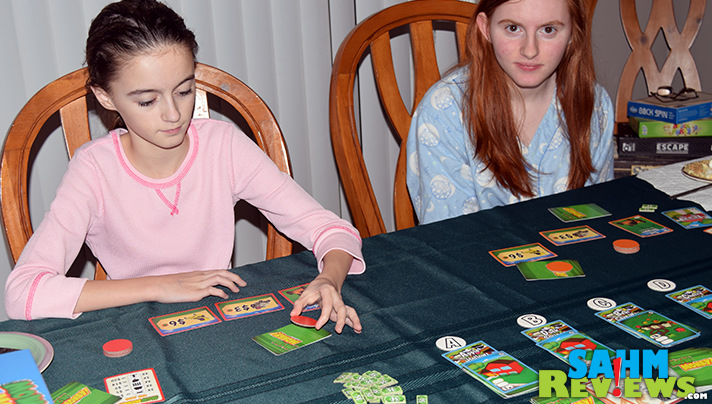 When all players have submitted their bids, they are evaluated to see which are awarded. Just like in real life, the lowest bid wins. The landscaper claims the contract card from the neighborhood, discards their resources submitted and collects the value of the winning bid. With each completed contract, the landscaper is increasing their reputation by the amount displayed in the upper right corner of the contract card. Players who were not awarded the contract may keep their resources to use in subsequent bidding or cash them in as an odd job. 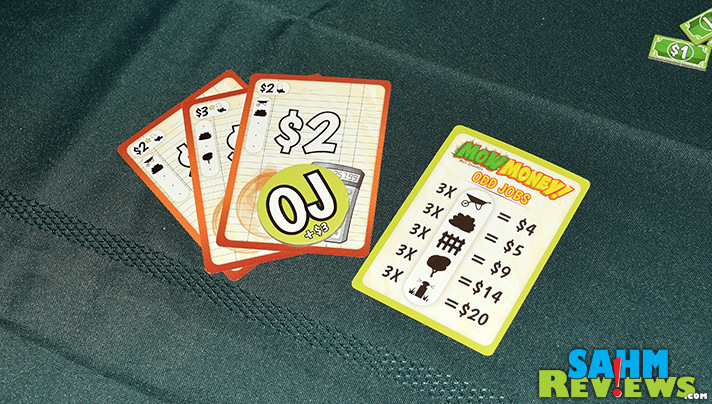 As I mentioned, players can bid on up to two contracts at a time. If they commit to an odd job instead of a contract, they’ll earn a $3 bonus. If they claim an odd job after losing a bid, they do not collect the bonus. When submitted in lieu of a contract, there is no competition for the odd jobs, but it still requires discarding the appropriate resources. The amount earned is determined by the symbols on the left side of the card. Turning in three wheelbarrows earns a landscaper $4, three shrubs nets $5, three fences is $9, etc. 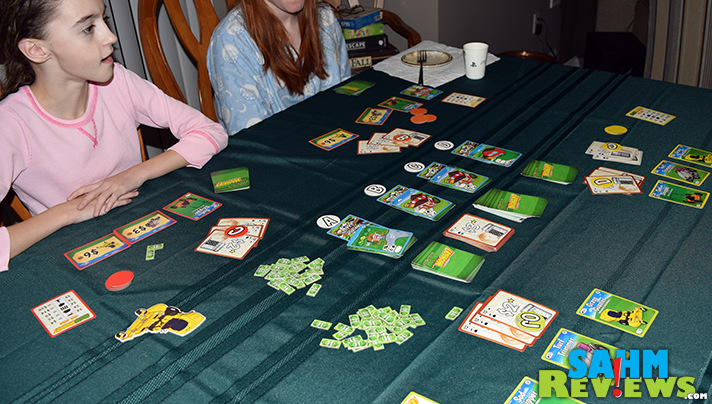 After all the contracts have been resolved, new contracts are revealed and the process starts over again with a new starting player. The game ends when all contracts from one neighborhood have been completed. The player with the most reputation at that point wins the game.

Mow Money is basically a bidding game. It’s fairly simple with instructions that include details on how ties are resolved, how players can use reputation as a form of currency and how bluffing cards can be used to disguise the real value of a bid. With general business and bidding concepts, it’s a good game for teaching basic economics to kids! It may even encourage them to start their own landscaping company to earn some extra money.

You can pick up a copy of Mow Money on Amazon for under $17 or direct from Mayday Games. If you’re curious what else they’re up to, stop by their Facebook and Twitter channels for updates on their latest adventures including details on a recent trip to China.

What was your first job after high school?