It’s been a while since we’ve shopped for games at our local Salvation Army store. We’ve had “OK” success there in the past, but for the most part the games are mass-market, damaged and overpriced. Case in point, the first game we looked at was a simple card game, Chomp. It was priced at only 95 cents and should have included a deck of 52 cards. Sadly, upon inspection we discovered it was missing one. Back to the shelf.

After sorting through Target store rejects (our Targets sends their damaged goods here), we found another Gamewright card game, Match of the Penguins. This should include 64 cards and three penguin pawns, and our luck was finally with us. Not only were all the components in the box, it was priced at only 65 cents! 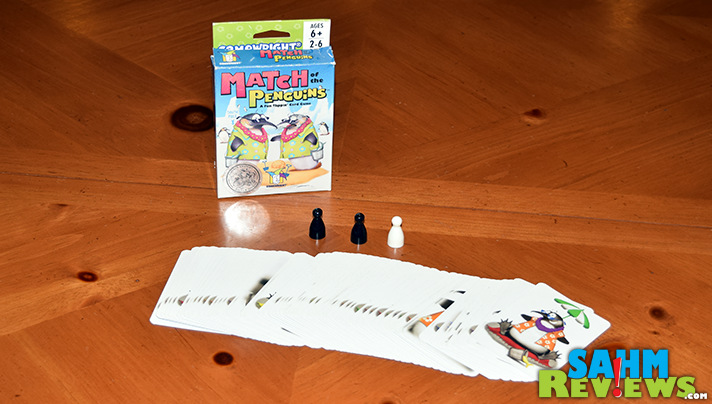 And it turns out to be another one of those speed-matching games I’m not very good at and had previously sworn off. This is fine, because it means my daughters will love it. The object of Match of the Penguins is to quickly find matching items among slowly-drawn cards before anyone else calls them. 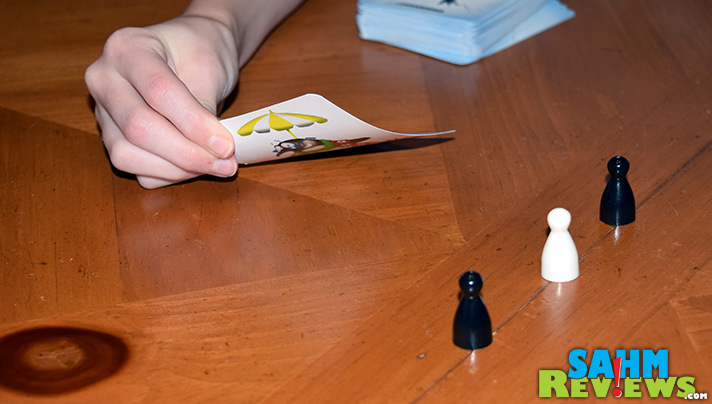 The dealer slowly reveals cards one at a time while everyone (dealer included) searches for matching elements, exact matching cards or a special card with a bucket of two fish. If you see an item on a card that exactly matches on another card, call out the name of the matching item. If correct (and no one else calls out a match that is valued higher), collect all face up cards to your pile. Deal then passes to the left and continues. 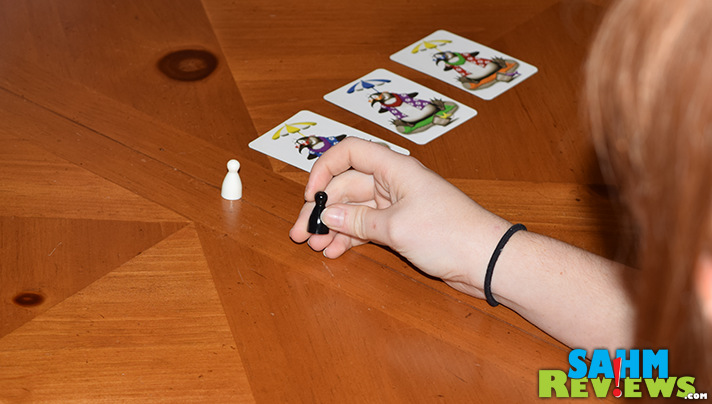 If you are lucky enough to find a card where two or more items perfectly match another card, grab one of the two black penguin pawns in the center of the table. Correctly finding this match gains you half of the face up cards. If the two cards are exactly identical, grab the white pawn instead and award yourself with all face up cards!

Lastly, if you are the first to knock on the table upon seeing a bucket with TWO fish in it, you’ll also be awarded all the face up cards. This is the highest valued hand, and beats all of the others (which were presented in order of value from lowest to highest). But if you incorrectly call out any match, you must discard one of your previously-won cards from the game.

Once the final card from the deck is dealt, everyone is given a last chance at finding a match before counting the number of cards collected and awarding the win to the person with the most!

Match of the Penguins is a simple game that works well as a game night favorite and as a compact travel game. Find a new copy on Amazon for under $15 or keep an eye out at thrift for a cheap copy for yourself! No promises you’ll find one as cheap as we did, but any price under $2 should be a no-brainer!

12 thoughts on “Thrift Treasure: Match of the Penguins”