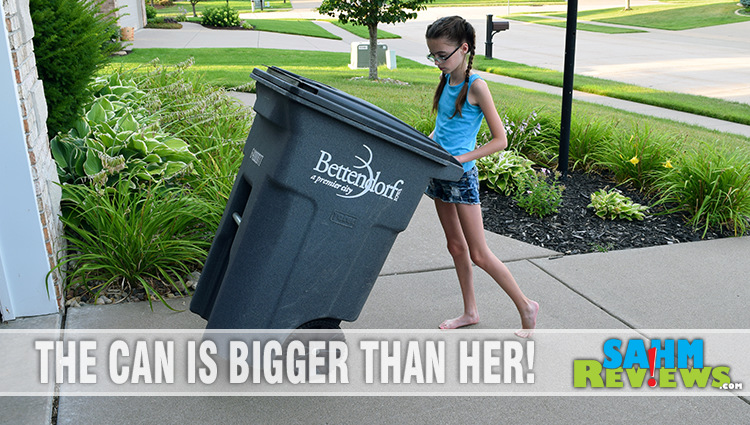 All you parents will agree – one of the best things about having teenagers is you can now give them more and more chores around the house. Sure, they’ll complain. But in reality you’re beginning the process of teaching them how to take care of themselves once they leave the nest. Wait, who am I kidding?! We’re just tired of waiting on them hand-and-foot! It’s time for them to pull their own weight!

Every Thursday night around our house it’s the same thing. Run through all the rooms and gather up the week’s garbage from the various cans. I can’t say it’s particularly fun, but something that must be done. There aren’t many things worse than week-old garbage if we forget to take them out. Lately we’ve been getting the girls to help (or do it themselves), but our requests are now being met with “I did it last week, it’s my sister’s turn!” and other similar complaints. Sure, I could reward them monetarily, but I’m afraid it would set a precedent for future chores. I don’t want to pay for every little task, especially when they are truly something they should be learning to do.

My solution? This week we’re going to make it a contest. And what better way than with a board or card game?! And with what can only be described as perfect timing, Mayday Games had just provided us with a copy of their latest dexterity game, Garbage Day! 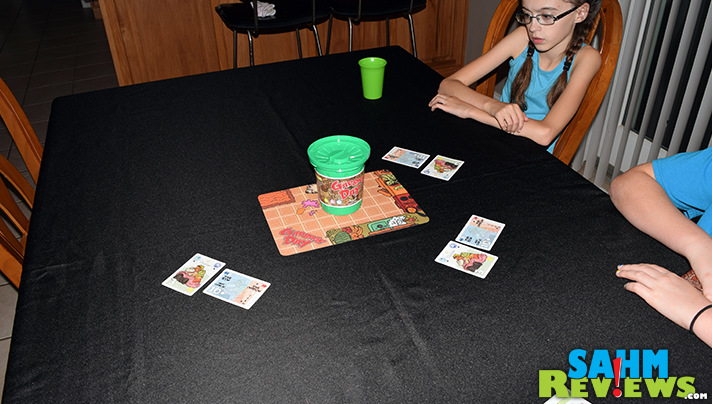 The first thing we noticed was the non-traditional packaging – a garbage can! It’s not a marketing gimmick, the can is actually used as part of the game! Garbage day is a dexterity game which requires you to balance cards on top of the can and ultimately being the person with the cleanest room and the least overflow. 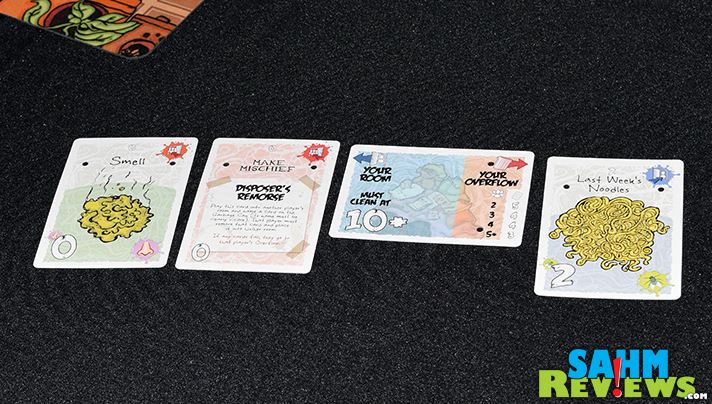 Another unique element to the included cards is each one has two holes pre-drilled. At first I wondered if it marked some type of factory defect, but upon clarifying the rules I realized the holes were the method in which to verify proper placement of each card on top of the garbage can.

All cards have two main parts to pay attention to. In the upper one or two corners will be icons that signify where you can put the card. It will either be in the trash, in your room or in an opponent’s room. The lower left corner signifies the “Size Value”. 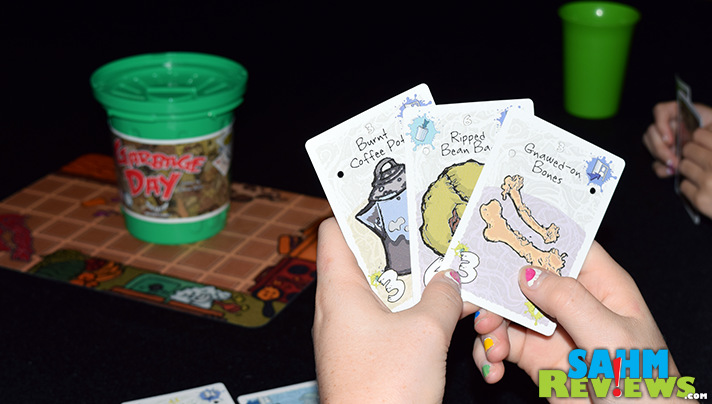 Players begin each round with at least three cards in their hand (draw to three if you begin with less) and decide which one to play. Following the icons at the top, choose which are to put the card. Choose the can and place the card on the upside-down lid, making sure you can clearly see through both holes down to the game table. Any cards that fall off are collected and placed into your overflow area. Once you exceed the overflow amount you are eliminated from the game (this benchmark will differ depending upon the number of players). Then check to see if your room is full. If the sum of the trash in your room ever exceeds ten, it is time to clean it! You must then take all cards in your room and also place them on the can (again, if any fall they go into your overflow). 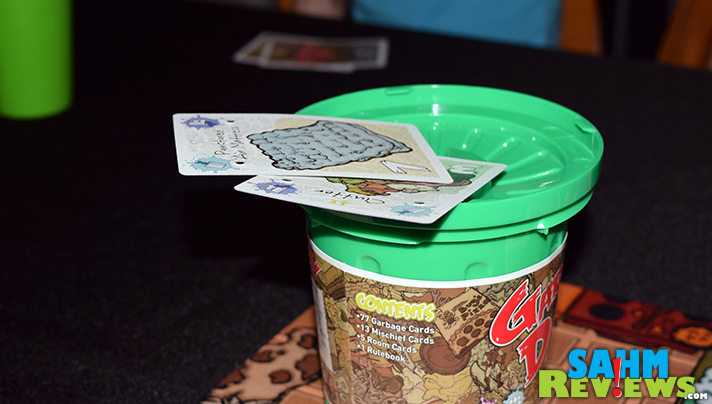 Players take turns playing one card at a time, making sure the holes on the newly-placed card are unobstructed. There are also a number of Mischief cards that may be followed when played. These will throw a wrench into your (or your opponents’) plans and allow you to sneak garbage from your room into another person’s or even require them to go “dumpster diving” and pull a card out of the garbage can! 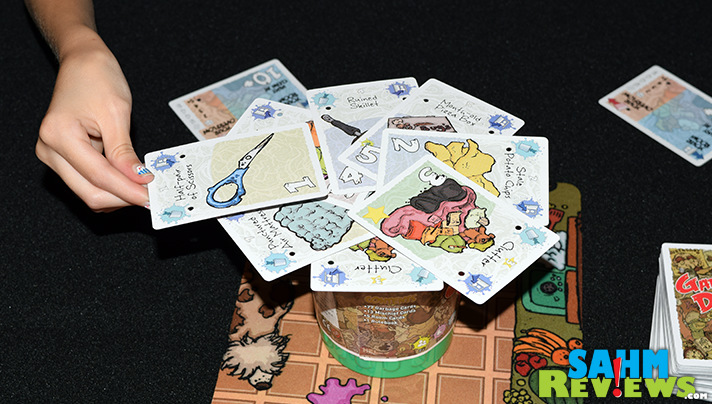 To win, all you have to do it outlast all of your opponents and not overflow the trash! A steady hand is necessary, as it a bit of luck when you draw new cards. 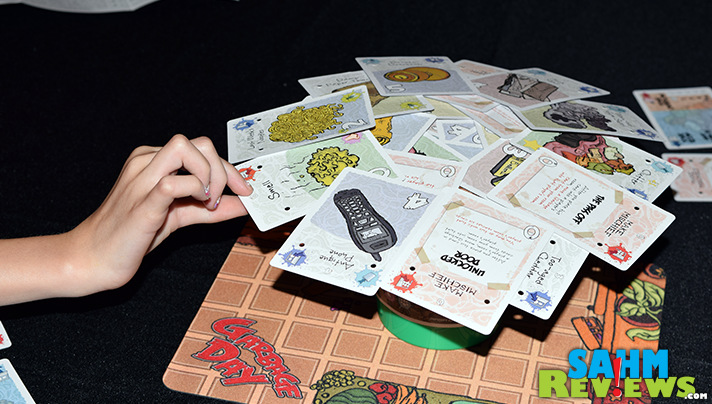 In the interest of fairness, we all participated and agreed the winner(s) would not have to empty the trash this week. Each round would yield one winner who would then be ‘safe’ and sit out the subsequent games. Whoever lost the final 2-player game would have to perform the chore this week. 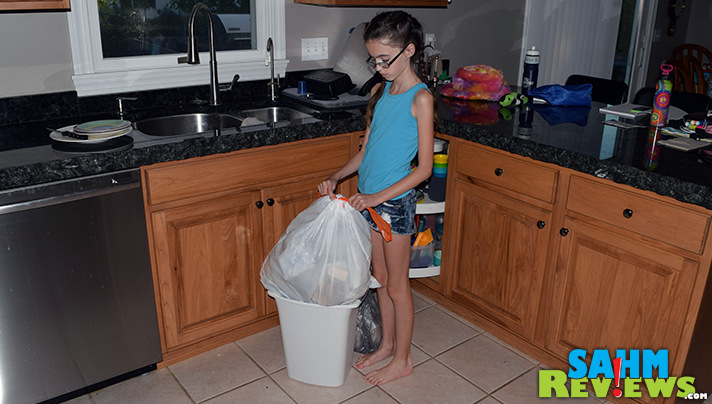 In the end, our game challenge proved to lessen the burden of taking the garbage out. In fact, since the loser ultimately got to play multiple rounds of the game, they ended up a winner by default! I wonder what other chores I can match up to games! Maybe we can convince Mayday Games to make a mopping-themed title!

Think Garbage Day would work for your chore list? Win a copy for your family by entering below. Be sure to come back tomorrow for additional daily entries and before you know it, you’ll never have to touch a Hefty bag again!