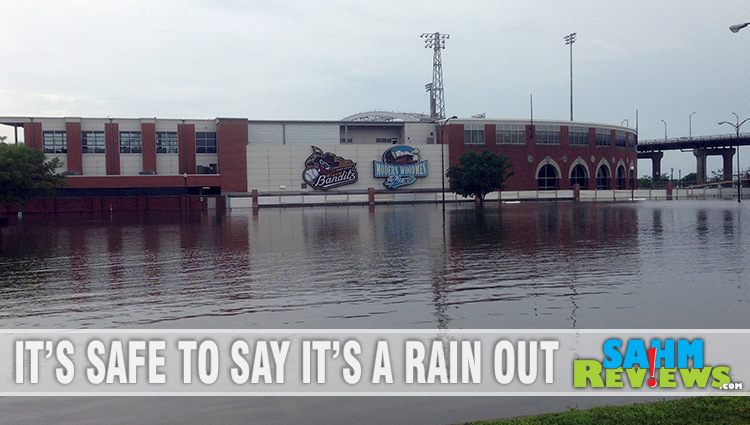 Animals on Board Family Game Overview

Every time it rains, I see the same disaster in my backyard. A river of water that runs down the backside of all the properties on our street. It’s one of the pitfalls of living on a hill and I guess it’s better than the water running alongside the house and into the basement. Right? 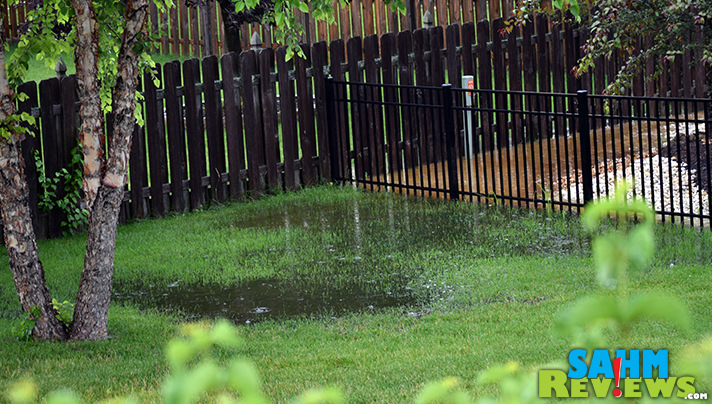 I cringe as I recognize that each rain means days of soggy property, but am grateful that my garden gets the much-needed drenching. No matter how many times I water during the summer, the ground surrounding the tomato plants is perpetually dry and cracked. But living in a city along the Mississippi River, we’re no strangers to flooding. It’s not uncommon to find our local downtown and ballpark under water.

And like any normal person, the next thing that comes to mind is a game. Because pretty much anything can make our minds wander to the need to play a game.

…Especially torrential downpours and the Mighty Mississippi. We think of how much we just need to build an ark to save everything. How handy that there’s a game specifically about that: Animals on Board by Stronghold Games. 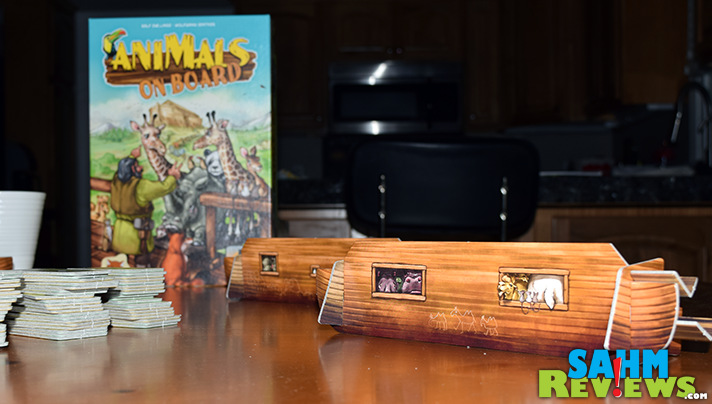 Last month we told you about another Stronghold game, Piratoons, and the fun design of the treasure chest. Well this latest release is equally as cool in the component category. Each player has their very own ark to recruit animals onto.

The concept behind Animals on Board is simple: we all need to save the animals but this guy named Noah has a corner on the two-by-two market. The goal is to finish the game with either herds of one species of animal (just not pairs) or only one of a variety.

Of course, you also need to be able to feed them all! That’s part of the game too. 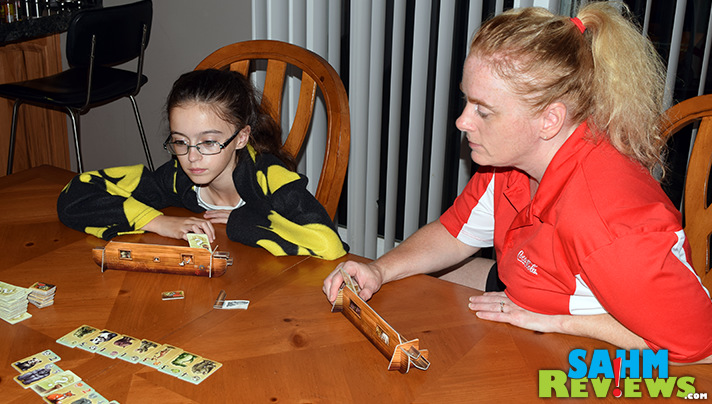 In the beginning, there are a whole bunch of animals all grouped into the middle of the arks. To be able to claim some for your ark, you need to be able to feed them. One crate of food per animal is required to let them board your ark. Unfortunately, at the start of the game you only have one crate of food. 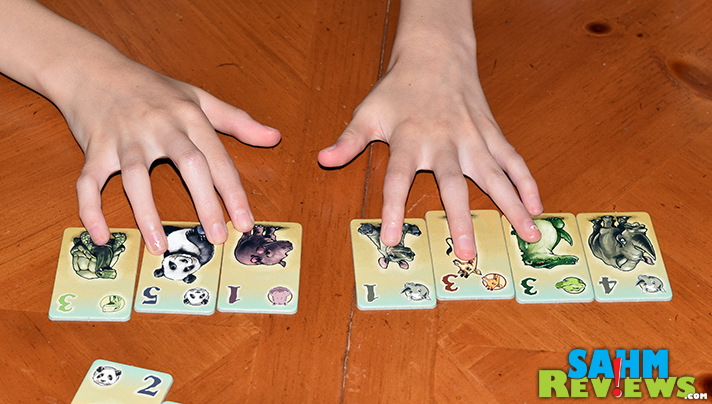 On your turn, you either select (and have food to support) an entire group or you divide the groups into two smaller ones. When you take on that responsibility, you’re rewarded with another food crate. Every ark-builder has their own idea of how animals should be re-grouped. While you might think a a couple of elephants, a crocodile and a panda are a nice group, someone else might want to split those up again on their turn. 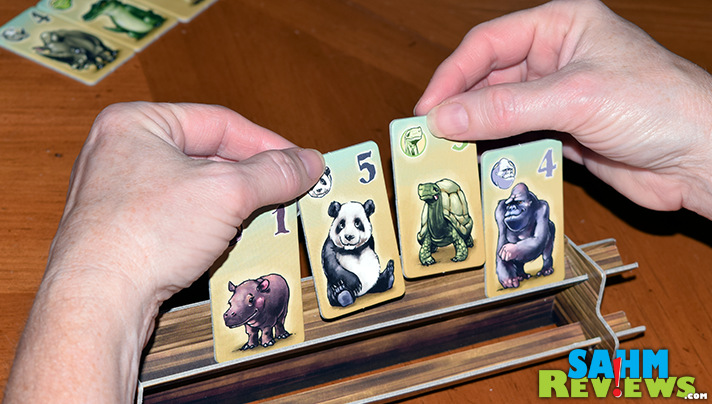 The process continues through all the ark owners as they continue to divide the groups or pay the necessary food and claim the creatures for their ark.

If you choose to bring creatures on your ark, you are done for the round and raise your break flag. Other players continue on their turn, skipping you, until they have all claimed animals. This process continues with additional rounds until someone has a fully loaded ark of 10 or more animals.

When the end of the game is triggered, players examine their arks and prepare them for departure. Any pairs of species are forfeited to Noah. Note: If you’re playing the game with someone named Noah, no, he doesn’t get all the tiles. After that, everyone needs to accept that their ships aren’t almighty and can only accommodate 10 creatures. They must decide which will be left behind to endure the flood. The 10 that are added to their ark must either be singles or herds of three or more. 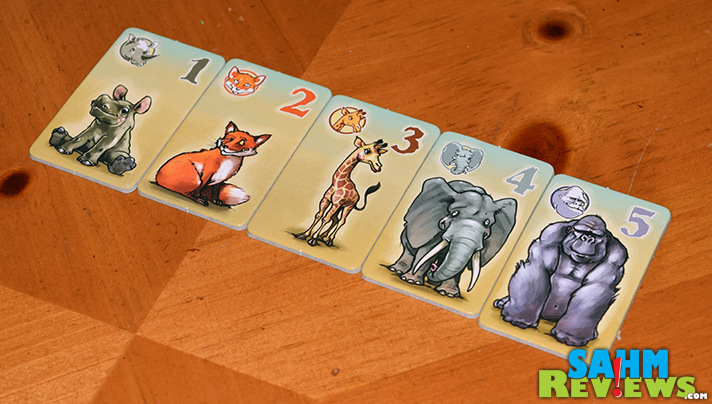 Then points are tallied to see who has been most successful at building and filling their ark. Single animals of each species are worth the victory points in the corner of the tile. Each animal in a herd is worth five victory points regardless of the number on their tile. Additional food crates are worth one point each. The builder with the most points when the arks set sail is the winner.

The process of the game is simple but that doesn’t mean it lacks strategy. Young kids could play this game using very basic explanations or more seasoned gamers could really delve into it and implement both offensive and defensive strategies. I’ve played Animals on Board several times and each time have been met with a different strategy style.

In addition to Animals on Board and our previously mentioned Piratoons, Stronghold Games is now distributing various titles in the Village line of games. Visit the Stronghold Games website to learn more about the variety of games they offer or follow their Twitter and Facebook channels where they regularly make announcements of new releases.

If Animals on Board floats your boat, you can pick up a copy on Amazon for around $25 or check your local game store or Barnes & Noble for copies.

Which animals would you save first?

16 comments on «Animals on Board Family Game Overview»