Home / Recreation / Games / What the Flock? Check Out 4 the Birds! 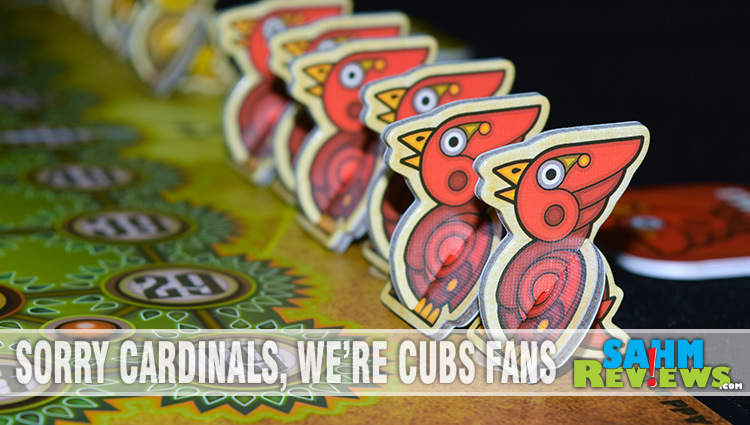 What the Flock? Check Out 4 the Birds!

I hope you don’t mind hearing me crow about how I love abstract games. There’s just something about facing off head-to-head against an opponent knowing neither of you has an advantage – that it is all up to your knowledge and skill. Most abstract games have a cardinal rule of having no theme at all. Think Chess or Checkers. Plain, sometimes boring pieces that do their job and nothing more.

Some purists will tell you an abstract game must have no theme in order to qualify as truly abstract. Maybe that is the case, but my own personal definition is a bit looser. Mine might have a theme, but still revolve around moving pieces to arrange them in a certain order or to capture all of your opponent’s pieces until only one remains. Technically Chess does have the theme of two royal armies fighting, but the design of most standard sets is very artistic and abstract – hence the adoption of the term “abstract game”. 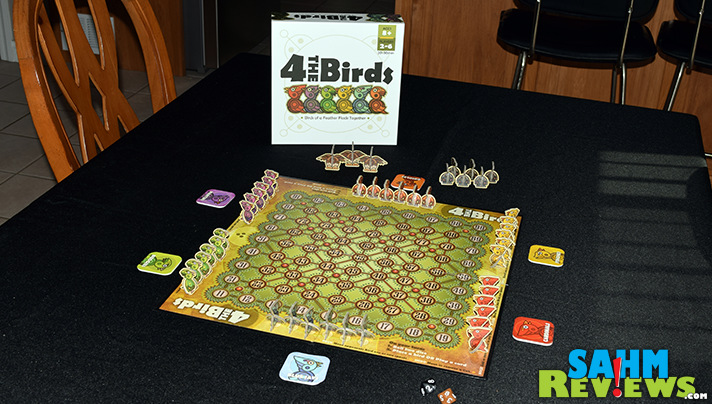 Most abstracts stick to two players, but we have found a few that play more in the past. Our recent Thrift Treasures, Touché, played up to three and Space Checkers handled four! Even the classic Chinese Checkers could play up to six people at a time! But we really hadn’t seen any recently published that could accommodate that many. That is until we picked up a copy of 4 the Birds by Breaking Games at the Origins Game Fair. This cute bird-themed abstract also supports up to six eagle-eyed players trying to get their birds in a row (or in a square). 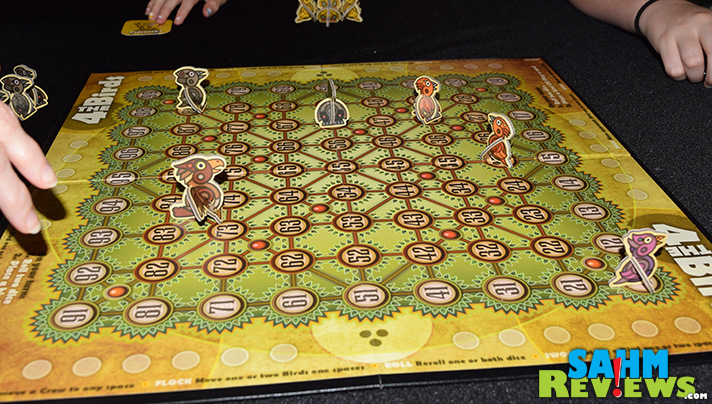 4 the Birds includes a colorful game board (which differs for the number of people participating), two sets of dice (again, matching the number of players), six sets of six 3D cardboard birds (assembly required), matching-colored sets of action cards and additional hawks and crows who randomly affect the game play. 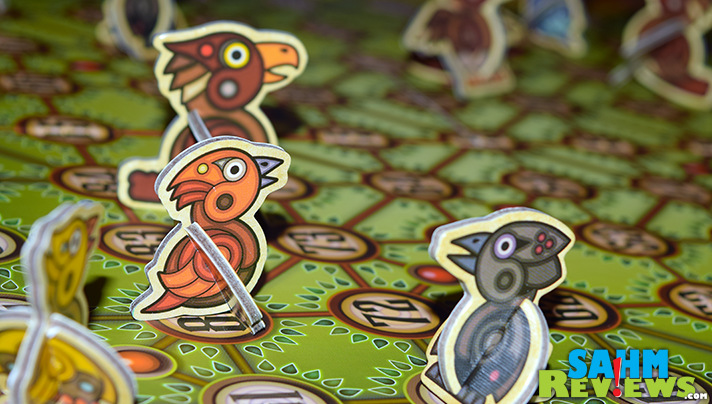 As previously mentioned, your goal is to get your birds into either a row or block of four before any of your opponents can. To place a bird you roll both dice and place it on either matching result. For instance, if you roll a “4” and a “2”, you can place your bird on either the “24” or “42” spot. If it is occupied, you may only land there if you have “immediate hierarchy” over the other bird, referred to as “pecking order”. This means you can displace a bird that belongs to the player on your left only. All other birds would prevent you from landing there in the first place. The displaced bird must now relocate to another spot, using the connecting branches as a guide. If the new spot is also occupied, the process continues using the pecking order as a guide as to who slides. If you cannot slide anywhere legally, the bird flies away and must be added again on a later turn. 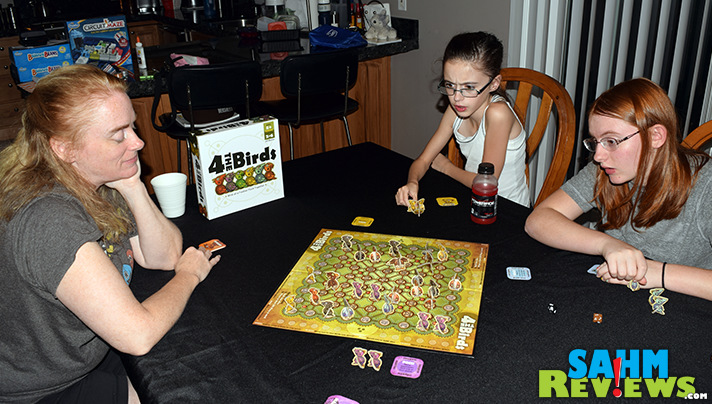 But there is much more to 4 the Birds than just roll and place your birds. Those of us that have bird feeders know there are certain species that are just bullies. The same thing happens in this game – crows and hawks interrupt plans and cause havoc.

If you roll a crow on the black die, you may place a crow along the number line of what you rolled on the other die (example – any spot containing either a “2”). The crow is higher in the hierarchy than all of the players’ birds, forcing them all to slide over a branch. 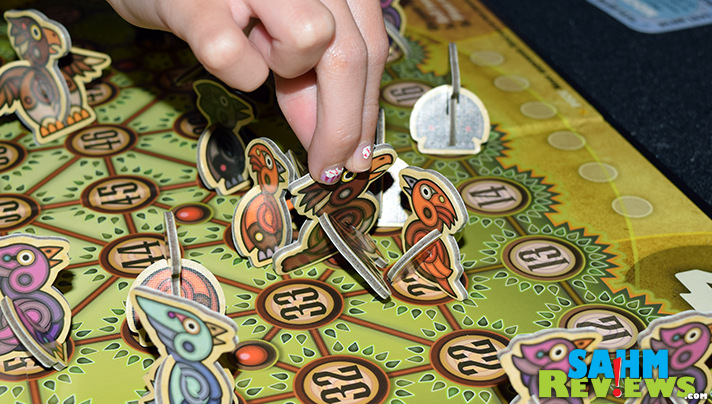 If a hawk is rolled on the brown die, you may choose to place the large hawk on any of the red spots marking where branches cross. Hawks are so intimidating that they force the four adjoining spots to completely clear out and slide outwards (or fly away) and you may not permanently land there. If you roll one of those numbers, you can briefly land on the branch, but then must immediately slide away using the pecking order rules. 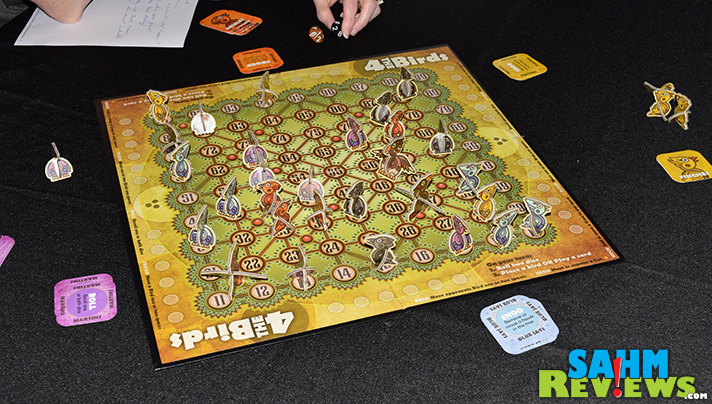 At any time, after rolling you may elect to play a card in your hand instead of placing a bird. These also mix up the game quite a bit and are limited, with each player having matching decks. Thankfully, anytime you roll doubles (which would give you only one spot on the board to choose), you add the top card from your discard pile back into your hand before you make the decision of placing a bird or playing a card. 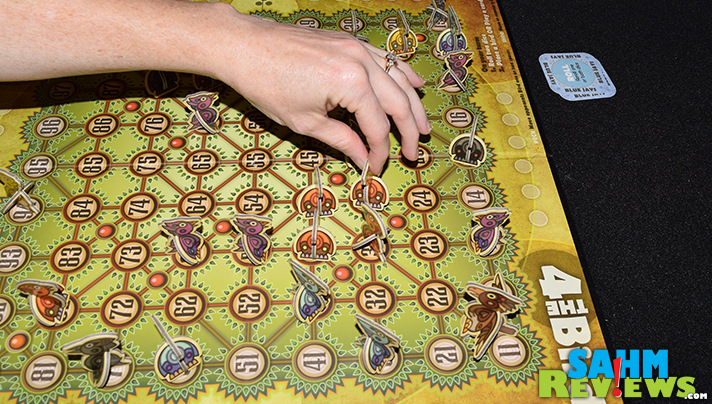 Once you have all six of your birds on the board, you must decide which to move to the newly-rolled spot. Getting four in order (or in a square) proves quite difficult when you only have six to work with!

Next time you sit down to play a game of Checkers with the family, only to have the other siblings (or spouse) anxiously awaiting their turn to play, break out a copy of 4 the Birds and let everyone have a chance at aviary greatness! Find your copy of this Breaking Games title on Amazon for around $40 or direct from their website. Breaking Games has a whole nest of family-friendly titles in their current catalog, and be sure to watch them on Twitter and Facebook for new product announcements!

4 the Birds features six different bird species (Blue Jays, Budgies, Martins, Cardinals, Finches & Orioles). Which would be the one you play?

9 comments on «What the Flock? Check Out 4 the Birds!»