I really didn’t think we had a favorite theme when it came to board games. We usually look for artwork we like, clear instructions and some type of game play that we don’t already have in our collection. For whatever reason a good portion of our games have pirates as the main theme. Even recently we enjoyed Rum & Bones, Skull King and Pirates of Davy Jones’ Curse! And it might be because we’re anxiously awaiting the next movie in the Pirates of the Caribbean series. But it seems the common theme of all these games is either pirates pillaging a town or city, or one where they are fighting off other bands of pirates to get to the treasure first. This time around we found something a little different.

Piratoons by Stronghold Games still pits you against other pirates in the plundering of a chest, but this time you are actually sharing the ill-gotten gains! Inside the chest are upgrades for your vessel in the form of sails, guns, deckhands and more. But there is more treasure than one ship can gather, so deciding which is most important to you and your crew leads to some very difficult decisions.

As I mentioned above, we love games which have some feature we cannot find in others we’ve played. We loved Colt Express for its 3-D train (and for the same reason, Histrio). Piratoons features a treasure chest that helps flip over the contents, revealing them to everyone at the same time! More on this in a minute. 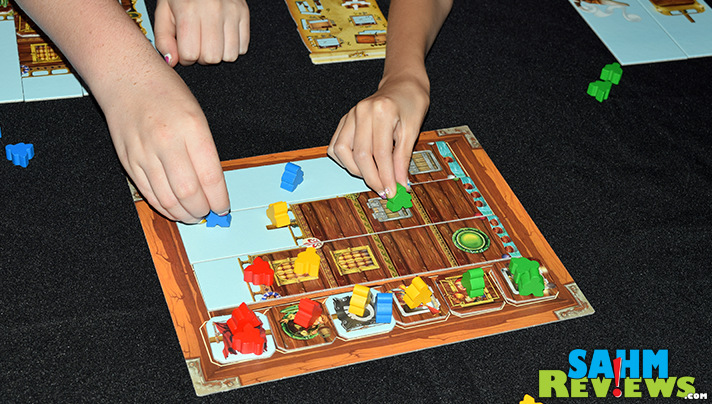 Your goal in Piratoons is to expand and upgrade your ship by bidding on the items revealed in the chest. During each of the eight rounds, six new pieces of equipment and three expansions to your boat are placed face-down on the included chest board. The chest is now closed by placing the second chest piece on top of the first, ‘sealing’ them inside.

This is where the special happens – because of the design of the chest pieces, you can flip over the chest without fear of pieces coming out of the sides! This allows you to remove the chest cover and start the timer without giving any player an advantage of seeing the pieces first. 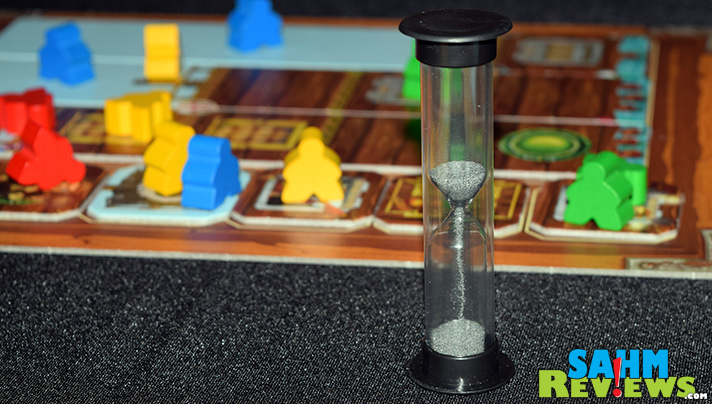 Once the contents are revealed and the timer started, the players race to ‘bid’ with their six pirate meeples on the pieces you want to claim. Once the timer expires, anyone can stop the bidding process by simply exclaiming “stop”. Thus, the timer doesn’t signify the end of the bidding, but sets a minimum amount of time you have – it could run much longer if everyone wants it to! 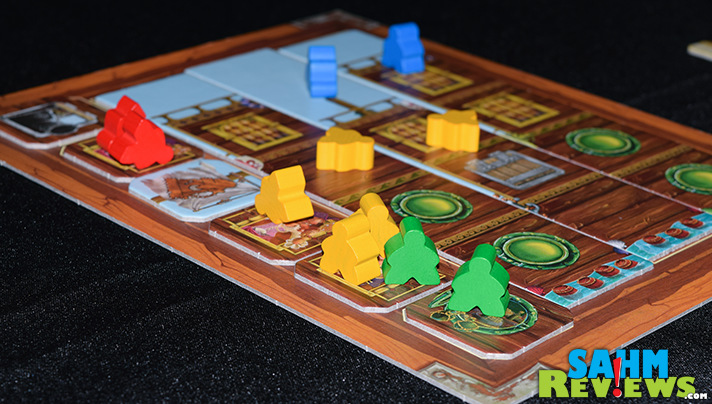 To win a piece of the treasure, you must have a majority of pirates on the piece. If you tie with someone, neither of you get it and the next highest bidder is awarded the booty. Pirates aren’t known for being courteous nor gentle, so there is a rule in place that if you knock someone else’s pirate off their piece, you are forbidden from receiving anything at all the entire round! A very harsh penalty, so mind your manners!

Claimed boat tiles are added to your ship board and equipment pieces stored in the match slots on ship. You need not worry during the game about organizing them, as you will have time at the end to rearrange them in the most efficient manner (before scoring). You are trying to correctly line up the boat sections by matching the shell color on the bottom and making sure you have enough empty spots and deck spaces to accommodate whatever you are bidding on from the treasure chest. 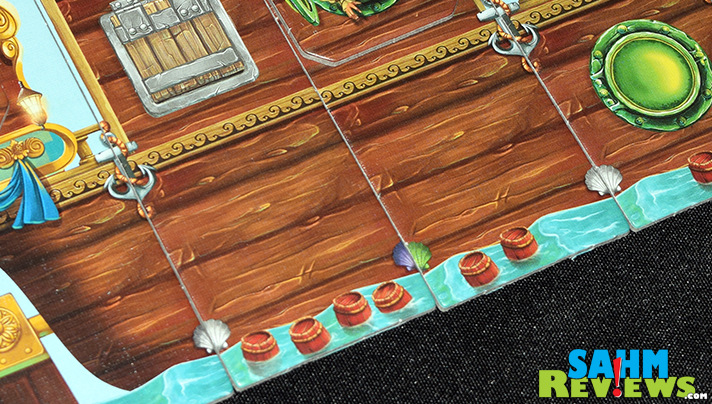 At the end of the game you will receive points for any of the following: most money, fastest ship (most sails) or largest ship (most barrels floating in the water). You also receive points for correctly aligning the shell colors and take a penalty for any mismatched ones. Additional points are awarded for matching sets of two (or three) like equipment items or sets of three from the same type. Leave empty spaces anywhere and you might also lose points if you have the most in a category or overall. Obviously the captain with the most points wins!

Piratoons has certainly earned its place in our permanent collection. Not only is the art cute and inviting, there are enough scoring paths to please adult game players. And of course there’s the awesome treasure chest. I see something similar being incorporated into other games where an instant reveal is necessary and you don’t want to penalize the person who is doing the revealing.The fact that it fits the pirate theme by being a treasure chest is just that much better.

Find your own copy of Piratoons on Amazon for under $40. You might already recognize some of the other titles on Stronghold Games’ website, but check it out anyhow – they are always working on more! Follow them on Twitter and Facebook to make sure you find out about new releases right away!

25 thoughts on “You’ll Literally Flip Over This Treasure Chest”