Last summer my daughters decided they wanted to participate in the local drama summer camp. Only two weeks of preparation yielded a stunning performance of Schoolhouse Rock. It was amazing all the things they learned during those ten full days of building sets, studying lines, rehearsing and discovering all things theater.

They had so much fun, drama camp was on the top of their lists of things to do this year. We’re looking forward to seeing how they interpret Honk Jr., a “heartwarming celebration of being different that promises to delight audiences of all ages with its sparkling wit, unique charm and memorable score.” At least that’s what the sales literature claimed – we’ll see how true it is in a month or so! 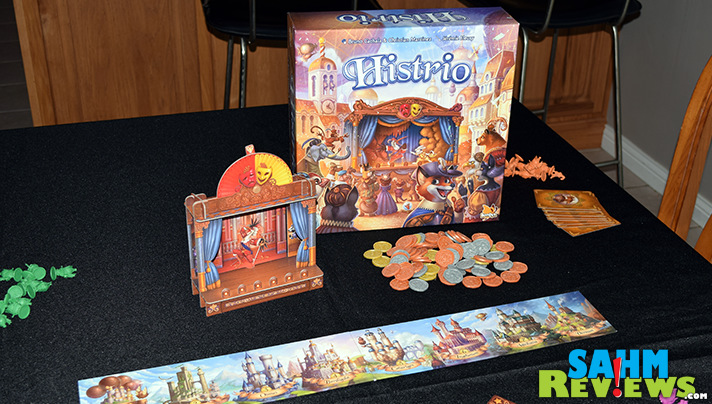 All this theater experience has given both girls the acting bug. So when we discovered Histrio by Asmodee, we knew we had to have it for our next game night (or day). I mean, how could we pass on a game that allows you to build your own troupe of actors and acrobats as the main theme, knowing how much they were enjoying performing in front of an audience? It looked to be a perfect fit!

As players, you take on the role of a producer assembling a troupe of actors and acrobats that will perform for the king at the end of the season. Each actor is proficient in one type of play – either a comedy or a tragedy. The king’s desires of which type of production to view wavers throughout the season, eventually ending on one or the other. Hopefully you have gathered the right group of participants to put on a feature to his liking. 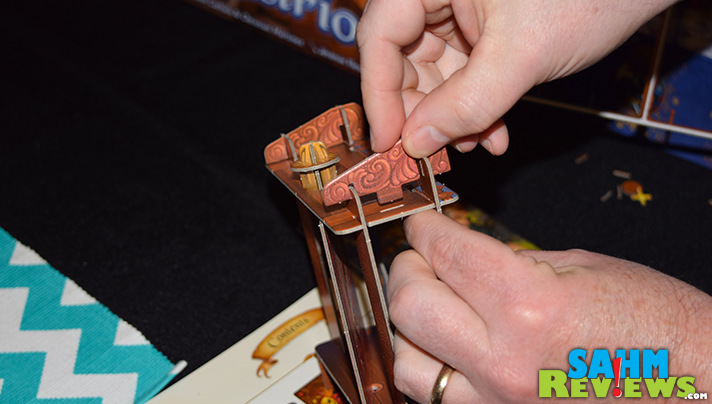 But before you can play for the first time, some assembly is necessary. Much like family-favorite Colt Express, Histrio utilizes a 3-D prop as part of the game play. Instead of a train, this time it is a stage which will help track the mood of the king.

By turning a dial on the top of the stage, you can display whether the king is looking for a tragedy or a comedy. While it is also reflected on the tracking dial, we found this extra touch to be a welcome sight for those of us with aging eyes. 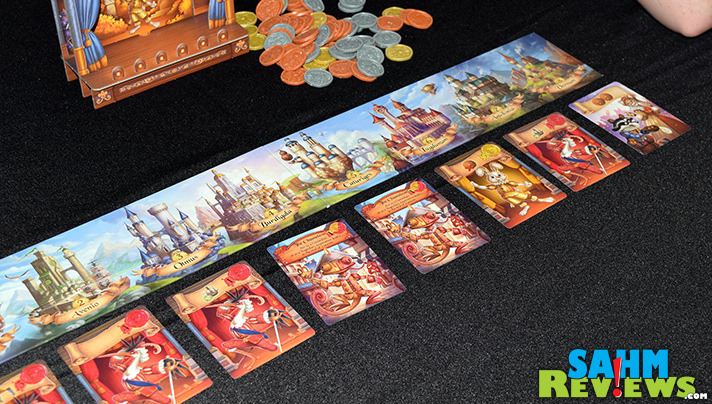 Now that the game is completely assembled, each player (up to five) takes 11 matching miniatures (8 caravels and 3 managers) along with the deck of 8 cards in the matching color. In the center of the table is a long narrow board that represents the eight cities you’ll be visiting in your attempt to recruit performers to your troupe. 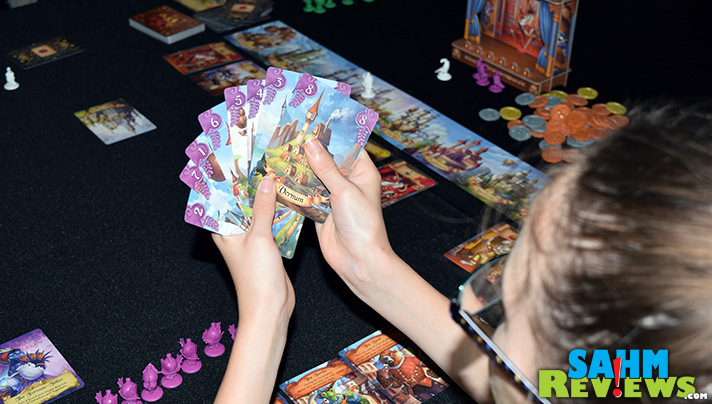 For each turn, one card is added to every city and players secretly choose one of the eight cards in their hand (this represents which town you want to visit on that turn). Everyone reveals their choices at the same time and places their caravel below the same city they selected. Working from left to right, each city is ‘resolved’. 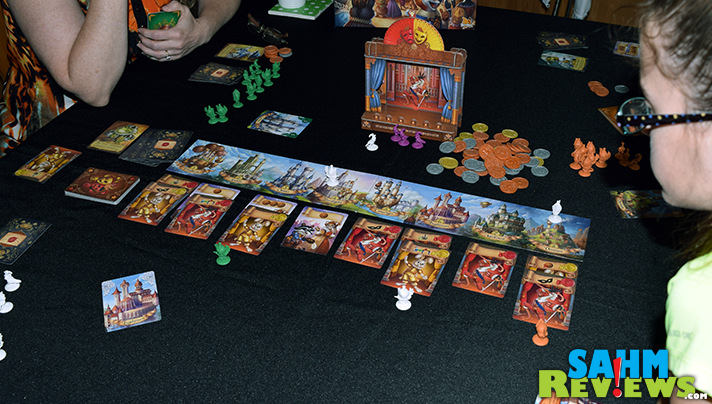 If you are the only person in that city, you win all of the cards. But, if two or more chose the same city, no one gets any of the card. In fact, the actors in that city go directly to work for the king and immediately affect his preference towards a tragedy or comedy (depending on the ability of the actor that was lost). Fortunately there is a consolation prize in the form of receiving a “Secret Request” card that gives you a sort of quest to go after.

There are three main types of cards you can pick up in a city. One simply gives you additional money, one represents acrobats that become a permanent part of your troupe and award you once-per-season special abilities and of course, actors. Actors serve a triple purpose in Histrio. First, when hired, they award an action depending on their experience level. They may allow you to steal a coin, regain all of your caravels or even send a manager to the set. Then you decide to either discard one (again, moving the mood of the king) or add them to your troupe. 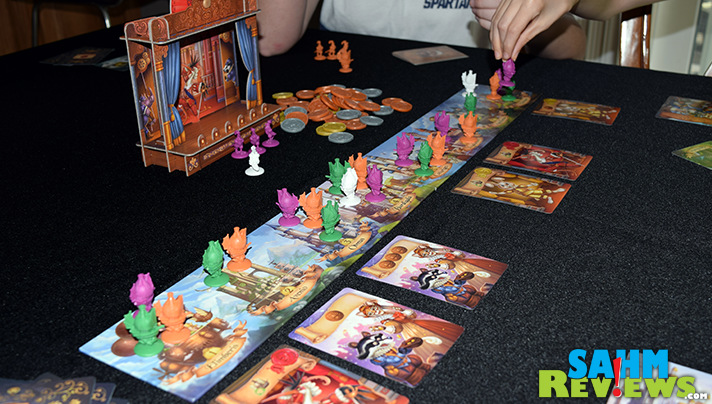 All caravels are then moved up into the city and eight more cards are dealt out. Everyone chooses again, but obviously cannot go to a city in which they already have a figure. Each theater season lasts until the deck of cards is completely used up, then everyone must put on their play to try and please the king.

Every player receives one coin for every actor they have hired. Totaling your actors’ experience levels will yield a number either red (tragedy) or yellow (comedy) which hopefully also matches the final mood of the king. If so, earn three coins for putting on a show that he liked (five in the second season). In addition, if yours was the best show (highest total), double your reward! 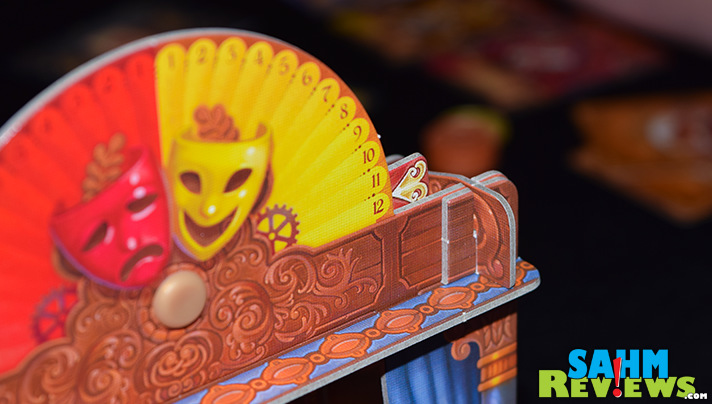 Lastly, you can now play a Secret Request card, earning coins if you completed the task listed. Choose carefully, because the card played in the first season also remains active and can be scored at the end of the second season. This is in addition to a second card that you will be able to play at that time.

Ultimately the player with the most money at the end of the second season wins the game. It may sound like a lot is going on, and because every choice you make usually affects you AND your opponents, those choices can change the game in a heartbeat. Because the game is played only over two seasons (two runs through the deck), it only lasts around 45 minutes – much shorter than many other games in this category. It does seem best played with 4 or 5 players so there are more conflicts, but Asmodee also includes special 2-player rules for those times when you don’t have the full compliment. 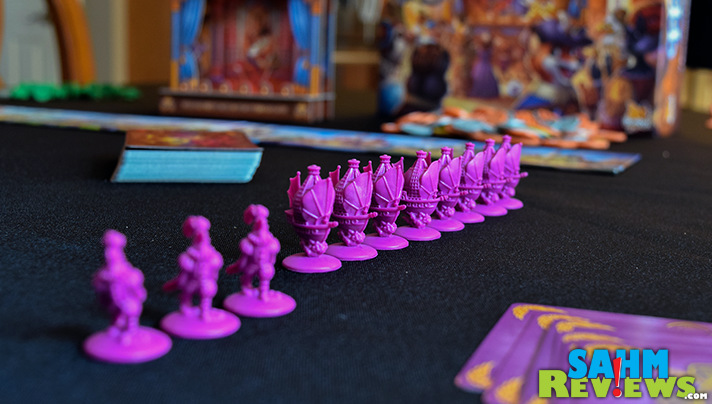 With beautiful artwork and a reasonable price considering the quality of the components (3-D stage, 55 miniatures, etc.), picking up a copy of Histrio on Amazon for around $50 is a great investment. As a bonus, Histrio was designed by Bruno Cathala (Shadows over Camelot, 7 Wonders: Duel, Five Tribes), one of today’s better board game creators! By sheer coincidence, Tuesday’s feature (Longhorn) was also designed by Bruno!

Be sure to keep an eye on Asmodee’s Facebook and Twitter timelines – we’re coming into the summer convention season and there will most certainly be a lot of announcement and teasers released in the coming weeks!

Have you ever participated in a play? What was it?