When I think back to the entertainment of my childhood, there are a lot of things that come to mind. I was active in hardball and later softball, 4-H, played outside, danced and played board games. But the one activity that rises to the surface more often than not is gathering around a wooden cable spool table to play cards.

Whether it was just our family or extended family and friends over for a gathering, that table was the center of the action. We would play trick-taking card games like hearts and spades, maybe poker, sometimes a board game, a good game of war, cribbage, Euchre or some other random card game we found in the card game bible. But my absolute favorite was spoons. It was a simple game that required little thought but a lot of speed and slyness. It brings back fond memories just thinking of it. 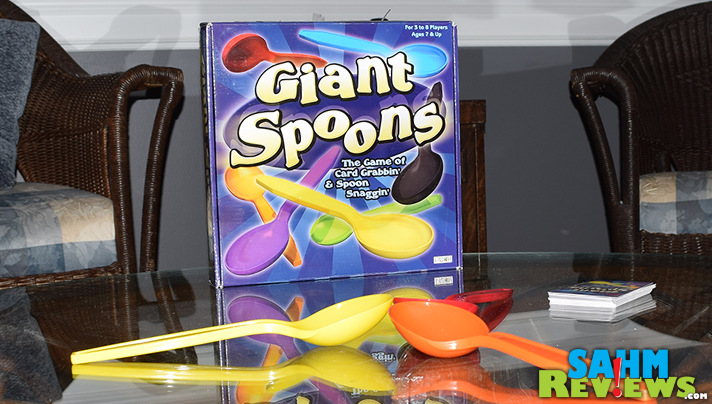 Then the other day, Kennedy was reading the directions for Giant Spoons, a Patch Productsgame we recently acquired from the Thrift Store. As she began to explain it to me, the flood of memories came rushing back. If I had realized Giant Spoons was a boxed version of my childhood favorite, I would have put it on the table sooner.

Giant Spoons consists of a deck of standard playing cards and seven giant, colorful spoons. Utilizing a musical-chairs concept of one-less spot than people participating, the game plays up to eight players. 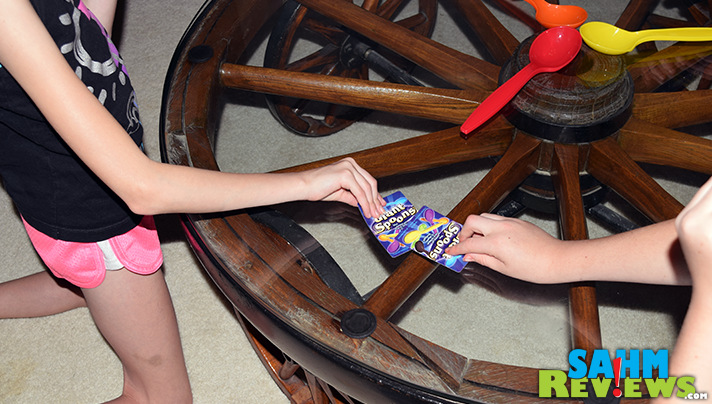 Each player is given four cards and the remainder of the stack is placed by the starting player. That person draws from the pile, adds the card to their hand then selects one of the five to pass to the next person. The second player picks up that card while simultaneously the first player grabs another card from the stack. The process continues around the circle with everyone swapping cards in and out of their hands. 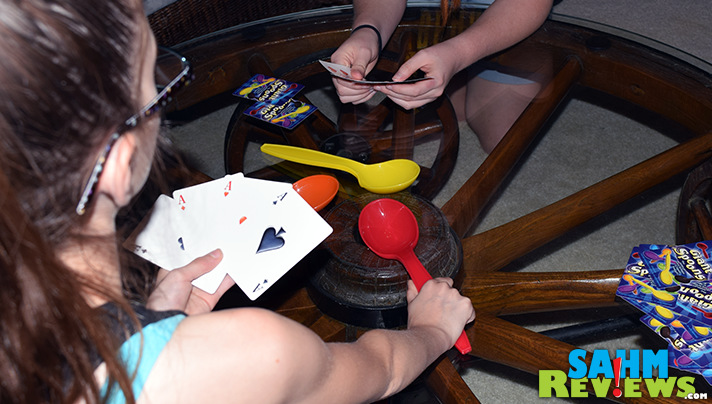 Four of a kind is required at which time a player can grab one of the spoons in the center of the table. Once a player has taken one spoon, the others are up for grabs to any other player. The game ends when the last spoon is taken and the player who was unable to grab one is eliminated from the game. The process continues until there is one person left.

While the Giant Spoons are a little more difficult to sneak off the table, they do offer a more colorful view (and less hazardous than metal silverware!).

Because I’m frugal, I recommend you play utilizing a standard deck of playing cards and spoons from the kitchen. If you love the process but want to change it up a bit, you can pick up a copy of Giant Spoons on Amazon, eBay or even at your local thrift store.

Do you remember playing Spoons as a kid?