We get great joy when we see game companies grow and expand into new markets and game types. When a company is known for producing solid titles in one genre and then take a chance at a whole new line, well…it takes guts. If what we’ve seen from the latest offering from Blue Orange Games is a sign of things to come, then it appears they’re headed in the right direction.

You may recognize Blue Orange Games from their crazy-popular line of Spot-It titles. You know, those round cards in a round tin that have you matching as fast as you can. We’ve found a few of their more well-known games at thrift stores and featured them in our Thrift Treasure series. Sumoku was one of the first, and more recently a wooden favorite, Gobblet. Today’s feature takes us away from the abstract style typically followed by Blue Orange Games and integrates a western theme which works well with the game mechanics.

Longhorn is a 15-minute game designed for only two players. You each take on the role of a cattle rustler competing to steal more cattle than your opponent all while avoiding jail time by running into the Sheriff. Included in the box are nine location tiles which are shuffled and randomly places in a 3×3 square. Each tile will also contain an action token randomly chosen from a pool of nineteen. 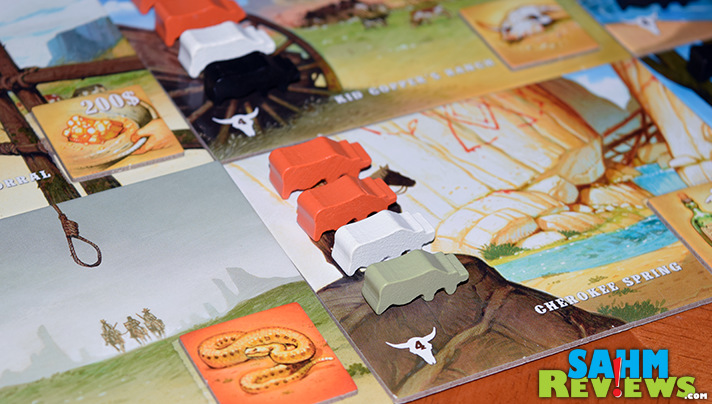 The board is also populated with Longhorn cattle. Each tile denotes how many cows are to be placed, and by randomly selecting the correct number you will have a mixture of the four colors to distribute.

First player is decided and the second player determines where on the board the game will start by placing the double-sided outlaw token on one of the nine tiles. On each player’s turn they must take two actions. First, you steal cattle. On the spot you are on, take ALL of one color of cow. After taking, if there are no more cattle on the tile you must also resolve the action token. Most of them help your game, but a couple are detrimental to your strategy.

Find Gold Nuggets and save those until the end of the game, adding their value to your total score. Perform an Ambush and steal a nugget token or two cows of the same color from your opponent. Or if you run into the Sheriff, the game immediately ends and you lose.

Once you have successfully performed your heist and resolved any actions, you now must move the outlaw token. You can only move the token orthagonally (not diagonally) and equal to the number of cows you just took. You may not double-back on your path and must land on a tile that has cows available. Tiles that have either the Sheriff or Rattlesnake (dangerous locations) cannot be traveled back through immediately. In other words, you have to give your opponent a break and not send them to that tile one turn after another! Flip the token over to signify the end of your turn and the beginning of the other player’s turn.

Players take turns until either one person has nine of one color cow in their possession or a valid movement cannot be made. If you have nine of one color, you automatically win. If you or your opponent cannot move the token to a valid tile with cows due to the number of cattle picked up, then the game also ends and final scoring is determined.

In a twist, each color cow is worth $100 times the number of that color cow left on the board. If all of a color is collected, that color is worthless! Add to your total the value of any gold nuggets collected and the outlaw with the highest amount of money is declared the winner!

It’s surprising, there is actually quite a bit of strategy in this tiny box. Fortunately the tiny box also comes with a tiny price – Longhorn is around $20 shipped on Amazon! Keep an eye on Blue Orange Games’ website, as well as their Facebook and Twitter accounts to be informed of other new titles they have in the works! Who knows, maybe their next one will be the type of game that is your favorite!

Which begs the question – what is your favorite type of game?

11 thoughts on “It’s Time to Rustle Some Cattle”