What was that old saying about the best laid plans? Late last summer we happened across a new reissue of a game that had been on my radar for quite some time. I’ve mentioned in passing my daughter’s unreal fascination with Siberian Huskies. We’re not totally sure where it came from as we’ve never owned a Husky ourselves. So when I spotted Snow Tails by Renegade Game Studios at the back of the Gen Con exhibitor hall, I knew we had to try out a copy. 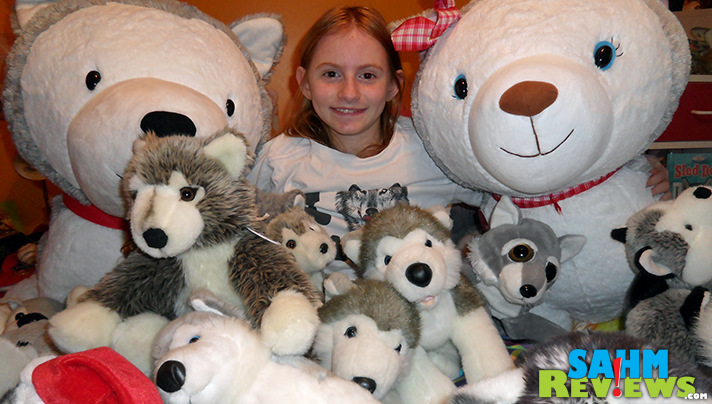 And I had a whole plan on how I wanted to feature it. We’re in Iowa, so every year we typically expect to receive well over 30 inches of snow. Just a couple years ago we almost set records when over 75 inches fell in one season! So getting photos of heavy snowfall and being stuck inside, but playing a snow-related game, would be ironic but topical. That was my plan… 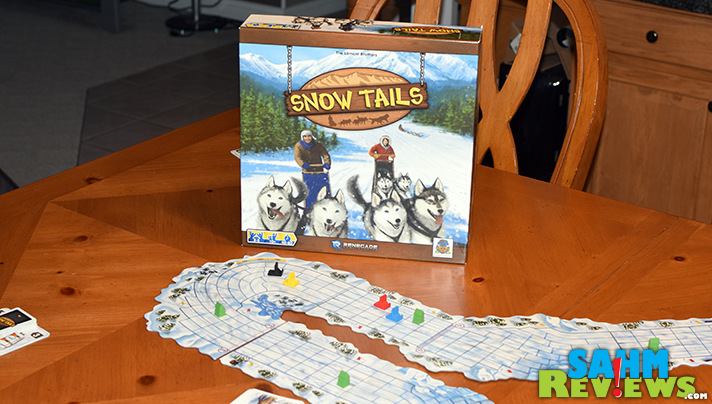 Guess what happened. Almost zero snow this year! The only heavy snowfall came well before the season, nearly a week before Thanksgiving! We were in Chicago at ChiTaG and by the time we returned it was already half-melted. So I waited patiently for another system to make its way through our area. And waited. And waited. There were a couple dustings followed by daytime warmups that gave us a hint of white, but nothing like I had envisioned. And now with Spring break here I have to accept there will not be the photographic opportunity I hoped for. Instead we’re playing Snow Tails inside during the rain! 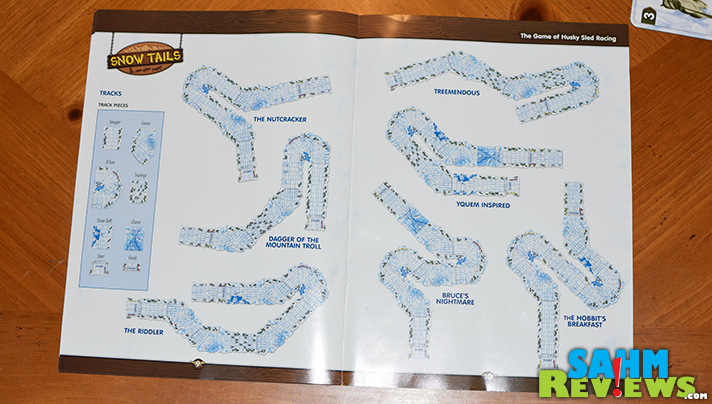 Snow Tails is a board game simulation of the Iditarod sled-dog race held each year in Alaska. But instead of racing cross-country, you are on a lane-divided track. It nicely includes modular board pieces and a few example diagrams of course layouts, but ultimately you can set up the game in any configuration of your choice! 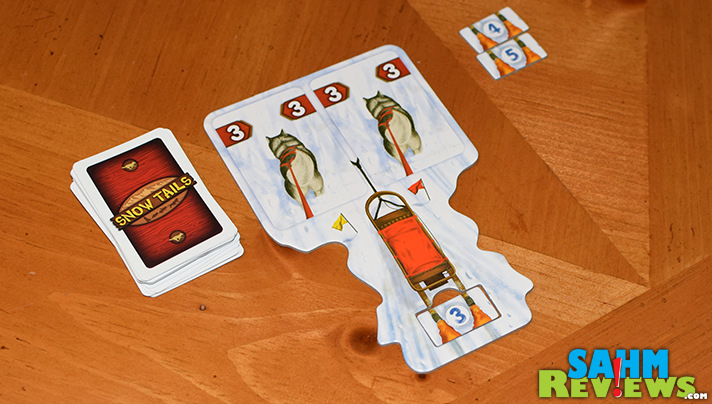 Each player received a board that represents their team. On the board are two places to play cards which represent dog strength. At the rear of your sled is the brake with a starting value of “3”. On each turn your speed is determined by summing up the strength value of your dogs less the amount of your brake. This resulting number is the distance you move forward on your turn. 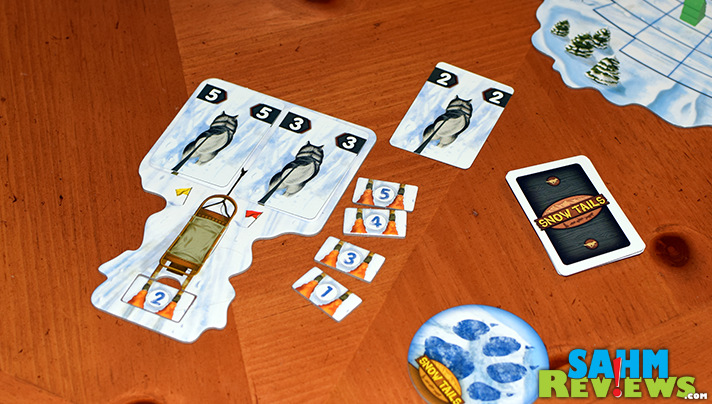 In addition, if your two sides are not evenly matched, your sled will pull (drift) to the stronger side. This is important to be able to maneuver around the corners and to avoid obstacles (and each other). On your turn you play cards from your hand of five cards, each having a number on them from one through five. By playing a card, you are either changing the strength of your dogs or altering the brake value of the sled. While you can play up to three cards (to change all three values), the limitation is you can only play one of a type of number. For instance, you can play two 3’s to change two of the values on your board, but you cannot change the third unless you have another 3 in your hand. 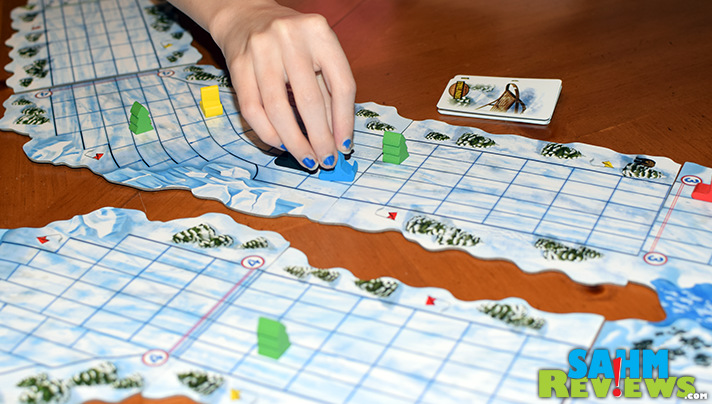 Along the way there are speed traps marked by red lines across the track. When you cross those lines, you cannot be moving faster than the posted speed limit. If you are, you receive penalty ‘dent’ cards into your hand (more on those in a minute). 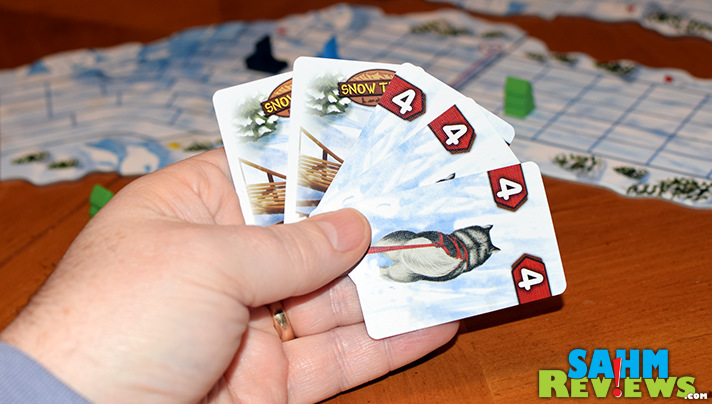 If you crash into a sapling in the middle of the course, bump against the edge of the track or run into another player’s sled, you will also receive a dent to your sled. Remember how I mentioned you had a hand of five cards? A dent card goes into your hand and replaces playable cards (you draw back up to five at the end of each turn). Having a damaged sled severely limits your choices in later rounds by reducing the number of cards to choose from.

If you are able to successfully move forward on a turn AND both sides of your dog sled are evenly matched, you can choose to take a bonus movement of three spaces forward as a reward for keeping your sled balanced. This boost might be exactly what you need to pass your opponent and fly across the finish line! 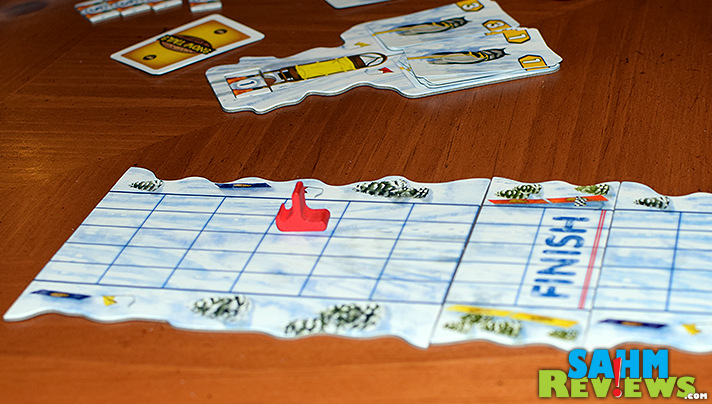 There’s a good reason this version of Snow Tails by Renegade Game Studios is the third printing since its introduction in 2008. It’s a well-balanced game that although recommended for ages 10+, could easily be played by kids a couple years younger. For best results though, planning ahead a turn or two is necessary – which might be a limitation for some that haven’t mastered that ability.

Expect a round to take just under an hour, and with the almost limitless number of course configurations, no two games will be alike. You can find it right now on Amazon for over 40% off! At that price you can consider more than one copy to make extra-long courses! If you do, don’t forget extra dog treats – your team will need them!