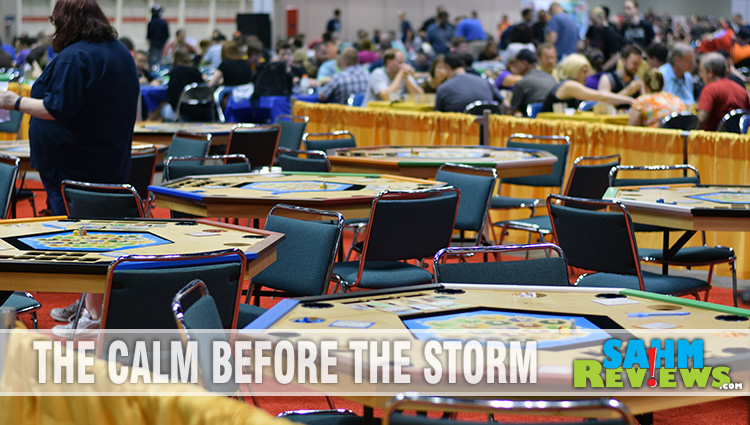 Awe. That’s the one word that comes to mind when I think of Gen Con. I had watched videos, seen a lot of pictures and read tons of articles about the event, but nothing could prepare me for what it was like to actually be there. This was our first year attending the event and I have to say it absolutely blew our minds and exceeded our expectations in so many way.

I had no doubt it would be a lot of fun, but had several reservations that had me dragging my feet ahead of time. My concerns, I discovered, were unfounded. Gen Con was completely different than I expected in so many ways. 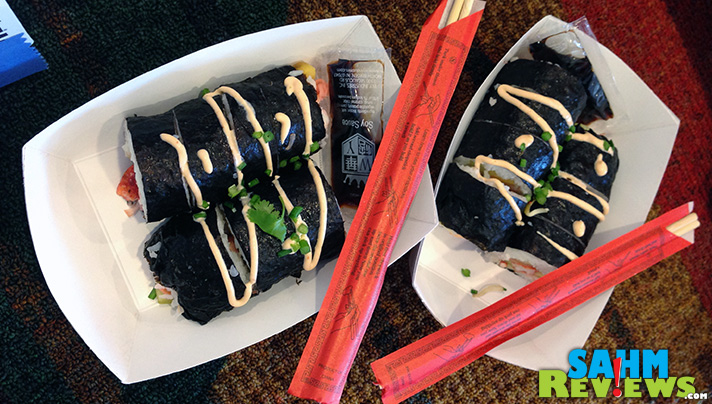 Of all the conventions I have attended, the food is one issue I always have. You can only eat hot dogs, pretzels and nachos so many times before you decide you prefer to be hungry. Gen Con was the first convention I attended that put an emphasis on having quality foods and variety on hand. The rotating food trucks offered so many options of flavors that it was actually hard to decide on what to eat! I had Shawarma one day, lobster sushi another. There were even trucks dedicated to dessert! The funny part is that we often found ourselves grabbing a bite from the convention center food court because they had a lot more than just hot dogs and nachos and the prices were reasonable.

Misconception: Lodging is a pain.
Realization: Even distant hotels have their advantages.

Our hotel was WAAAAYYY far away. I thought I was going to hate it, but we planned accordingly and it actually worked out quite well. We saved quite a bit on the room by not getting one close by and researched parking ahead of time. We pre-purchased parking about a half mile away and later found out that our walk to the car was just as short/long as what some people were doing to get to their “nearby” hotel. I no longer have a concern about booking a hotel that requires a drive… after all, traffic at midnight isn’t too heavy anyhow. 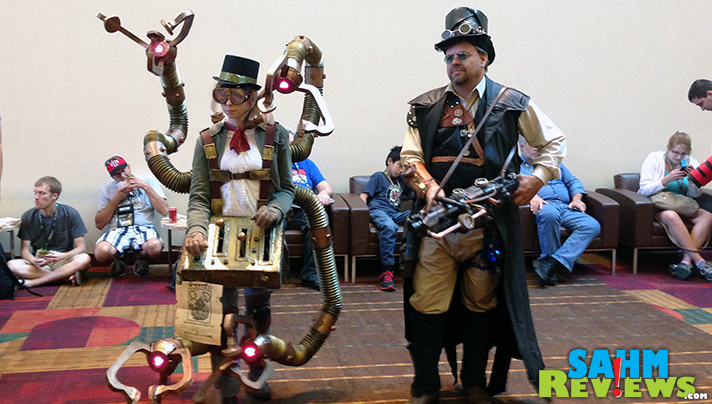 Misconception: A few people will dress up.
Realization: LOTS of people love Cosplay.

While one day was dedicated to offering a Cosplay parade, that didn’t deter people from being in costume the entire weekend. Some outfits were very basic, involving little more than clothing to depict their character. Other outfits were more elaborate looking like something from the latest action movie including stilts and motorized mobility devices. I even spotted little kids dressed like their favorite Disney characters. I thought it was going to feel like a circus with people walking around in costume. While it caused some issues with traffic flow as people stopped to take pictures, it definitely offered a new twist on people watching. Some of the participants deserve serious kudos for the detail in their workmanship. 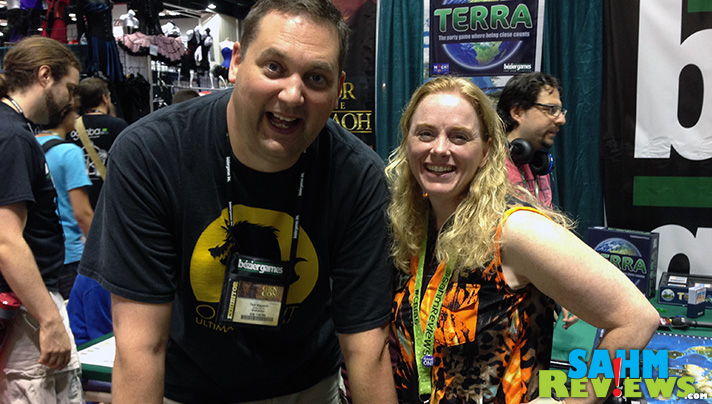 I attended Gen Con on a media pass representing SahmReviews.com. My goal was to connect with new companies so we could continue to introduce all of you to more than just the games traditionally found on mass merchandiser shelves. That meant meeting with the marketing teams for some companies while connecting with the game designers at others. I’m not sure what reaction I was expecting when I met these people, some of whom I’ve met digitally, some who I’ve met in person at ChiTag. What I did NOT expect was to be greeted with someone jumping up and down like a school girl. (Yes, that really happened). What I discovered, time after time, was that game people can be pretty cool. They love what they do and enjoy passing along that passion to others. 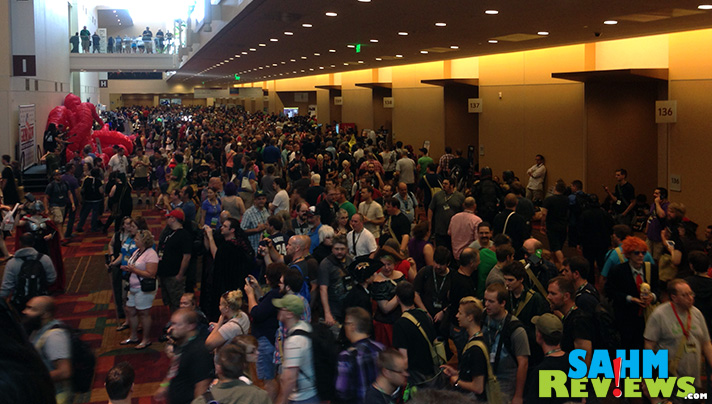 Each year, the attendance numbers grow. It has become such a massive event that they have run out of room. There are already wait lists for exhibitors and caps on the size of their booths for next year. Gen Con fills the Indianapolis convention center as well as many meeting rooms at surrounding hotels. I’ve even heard rumors that they’re considering expanding into the stadium area in future years. This year, we found activities, events and booths in the convention center main halls and meeting rooms, but also in the general access areas, balconies, open spaces and even in the hallways. After the photos and videos of the crowds, we opted to leave the girls with their grandparents and take on Gen Con without them. I was wrong. They could have gone. They would have loved it. The most surprising part about the elbow to elbow crowds was that they were the politest bunch of attendees I’ve ever been around. I think I was bumped a whopping two times and each of those times included the bump-er apologizing profusely. Crowds sometimes get to me, but the attendees at Gen Con 2015 were courteous and considerate. We’re already making plans for the kids to attend with us next year. 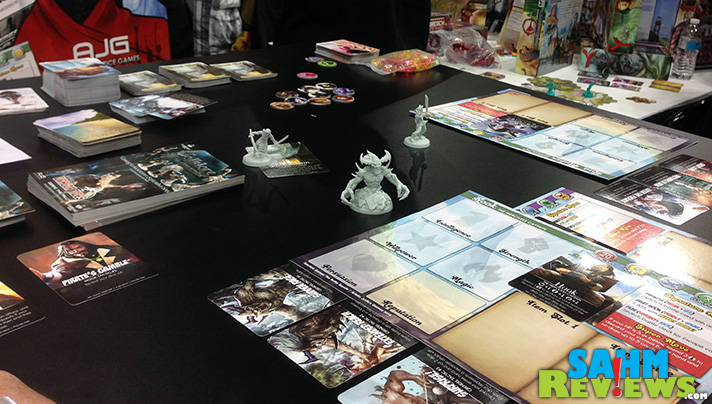 Misconception: Gen Con is for hard-core gamers.
Realization: Such variety of activities, you can’t do everything you want.

When you have an event this large, diversity of activities should follow. At Gen Con, it certainly does. The variety of activities goes well beyond catering to gamer-types by including classes such as how to make sushi. Some examples of the types of things to do at Gen Con include: Visiting the exhibitor hall where you learn about the latest game releases, talking to inventors, shopping for everything from accessories to clothing to furniture. Various play areas where you can demo games, show your skills in tournaments, learn about games or simply watch as others participate.  Additional rooms house keynote presentations, panel discussions and classes. I even found a room that was for crafters! In addition, there were hidden gems like the puzzle hunt that included a series of brain games to decipher and puzzles to unscramble.

Misconception: Gen Con will get boring.
Realization: You’ll have to convince yourself it’s time to sleep.

While the exhibit hall closes at the end of a traditional business day, I believe it was 6 each day except the final day when it closed earlier. However, the hall was only a fraction of the action. There were games going on all night including Ultimate Werewolf marathons. We stayed late in Rio Grande’s game room one night but could have easily found things to do if we had the energy to play even longer. One thing is certain: You can’t do it all. You shouldn’t even think you can. It isn’t about money, it’s merely about time. Even with late-night gaming options, “The Best Four Days in Gaming” could stand to be longer.

We’re already thinking ahead to next year. Planning on driving in a day early so we can get as much out of Gen Con as possible. We’ll take the kids, aim to stay at the same hotel, plan for the same parking lot, schedule ourselves into some of the events instead of just watching and most important, get rest ahead of time so we can game-on all night if we choose.

What are your reservations about attending an event like Gen Con?

51 comments on «7 Misconceptions About Gen Con»