I thought it might be fun to have a little history lesson today. Don’t worry, there won’t be a test afterwards! But if you were anything like me in grade school, history class was the best class for passing notes, catching up on lost sleep or daydreaming about the girl two rows over. Current events was hard enough, but learning about something that happened 150 years ago (at that time) was not on the top of my priority list.

I had heard of the War of 1812. And other than knowing that it was when the Star Spangled Banner made its debut, I guess I was oblivious to how/why/where it took place. While we call it a ‘war’, in Europe it isn’t even considered an official theater, but an extension of the Napoleonic War. Did you know that many of the battles took place in what we now call Canada? In Upper and Lower Canada, British and local Canadian militia victories over invading US armies became iconic and promoted the development of a distinct Canadian identity, which included strong loyalty to Britain. Today, particularly in Ontario, memory of the war retains its significance because the defeat of the invasions ensured that the Canadas would remain part of the British Empire, rather than be annexed by the United States.

But what if things had turned out differently? Would we have an additional thirteen states (the Canadian provinces and territories). Or if the British had been more successful, would the Great Lakes area remain under British rule? 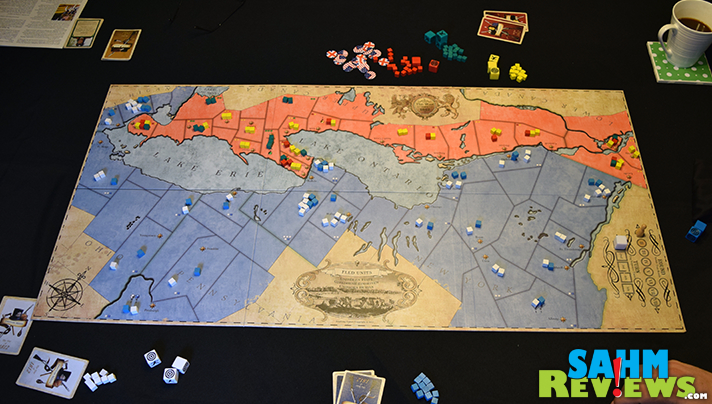 We were watching a demonstration of a game at Gen Con that allowed us to find out the answers to these questions. 1812 by Academy Games attempts to recreate this critical part of the War of 1812 in game form. If you’re not familiar with Academy, this quote from their President, Mr. Uwe Eickert, sums up their company strategy the best:

Academy Games publishes fun and engaging games that also impart social and historical learning. We specialize in historical board games for gaming enthusiasts, schools, museums, universities and military personnel. Our products range from family games to tactical training games. Our games are quick to learn and fun to play. Each game gives the participants a sense of history by including write-ups and maps that neutrally describe why the situations or conflicts occurred, how they progressed and their historical repercussions. We are honored by the many awards that we have received and hope to follow them up with new games that exceed our customer’s expectations.

As I watched the demo, I realize this war game was not like the ones we used to play back in the 80’s, with cardboard chits, long hours of strategizing and games that lasted days, if not weeks. This was closer in design to Risk, but with much more depth, a historical background and campaign alternatives that would give it much more replay value. We needed a copy for ourselves. 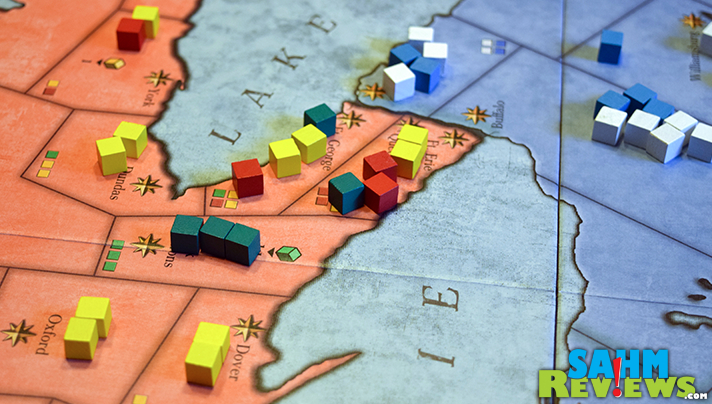 1812: The Invasion of Canada is played by up to five players, with three controlling the forces in Canada and the other two taking on the role of the Americans. Each player has their own color of troops representing the British Regulars, Canadian Militia and Native Americans (Canadian side) and the American Regulars and American Militia for “the good guys”. The map is pre-populated according to the instructions with armies in major cities along the borders, as well as in territories a bit further from battle. These represent the sides’ training areas, or muster points. 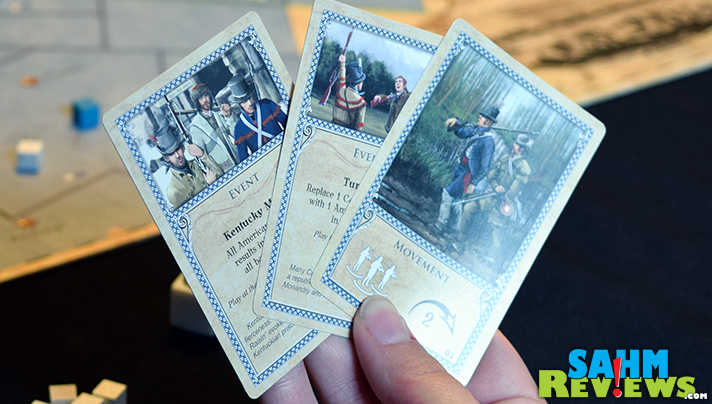 The beauty of this game is in its ease of teaching. 1812 is played over a number of rounds, up to seven. Every player gets a turn each round to choose a movement card from their hand of three, play any event cards to throw a wrench in their opponents’ plans and resolve any battles that take place. 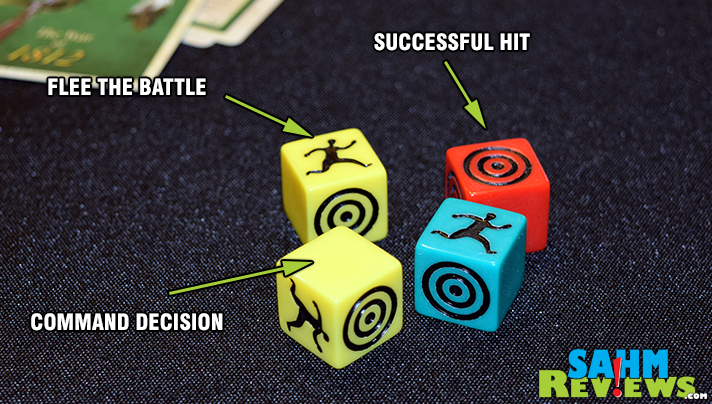 Battles are won or lost by rolling custom dice for each faction, with each also having different levels of success or failures. British Regulars never flee from battle, while American Militia subscribe to the adage “Those who fight and run away…”. 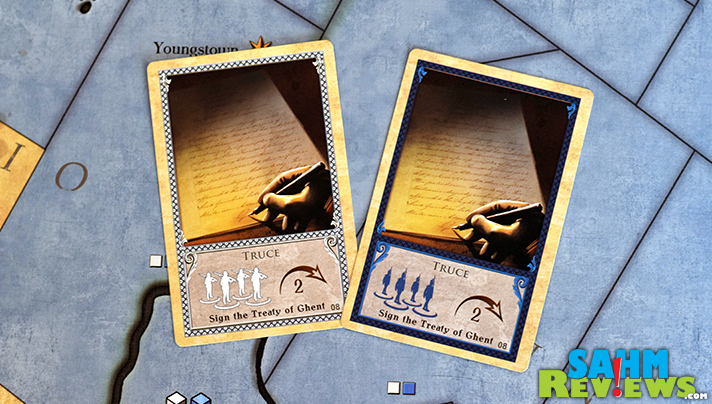 The object is to overtake more enemy cities than you lose. But while this sounds simple, there is a fascinating mechanic that can end the game at any time – a truce. Every faction has one truce card in their deck, which also operates as a powerful movement card. If all players from a particular side plays their truce cards, the game immediately ends at the end of that round. 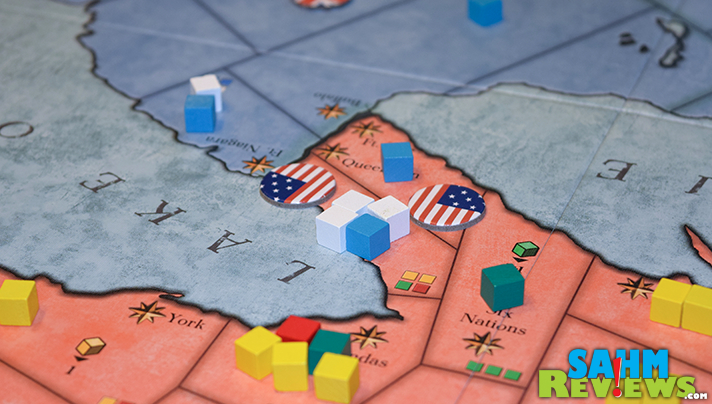 But you might be well into your opponent’s region, yet haven’t had the luck of drawing the right card to end the game. Now you might be spread too thin to defend, allowing the enemy to retake their cities and possibly move into your territories! It is a constant balance of attack vs. defend, coupled with timing of the cards you play. Add in the fact that turn order is determined randomly by drawing blank dice from a bag, and your well-planned strategy may be out the door by the time your turn arrives.

If this were to be your first war game in your collection, you’ll be relieved to know that Academy Games includes instructions for a 2-round introductory scenario. Our first game was set up in this manner, but shortly after we found ourselves eagerly wanting to play a full game – which we have many times over since that first day. Sadly, the best the Americans have been able to do so far is to eek out a tie. Otherwise we’ve all been bowing to the king at the end of the game!

Once you’ve mastered the full game, there is also the option for an 1813 scenario that takes you into the middle of the war. Both sides are more heavily populated, but neither side has an advantage. This leads to some more epic battles and skirmishes, not just one-on-one fights.

If you’re considering some type of entry-level war game, you absolutely have to look at 1812: The Invasion of Canada (or any others in Academy’s “Birth of America” series). Amazingly easy to learn with an accurate historical lesson – it’s a complete package in a game that should run just under two hours. You can find copies on Amazon for under $50 or check at your local game store to see it before you buy. Be sure to follow them on Facebook – you’ll be amazed at the research they do for each game, including visiting the sites personally!

21 thoughts on “Did You Know We Waged War in Canada?”