Home / Recreation / Games / The Positive Side of Pillaging 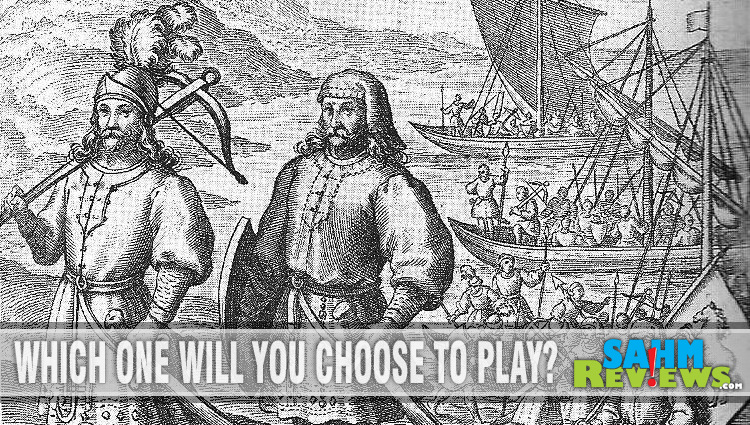 The Positive Side of Pillaging

Many moons ago when I was still in school, there was one subject that always put me to sleep – history. Didn’t matter if it was world or U.S., I just didn’t find interest in learning about mistakes and accomplishments of people that have long been worm food. Today I find myself caught up in a number of biographies about Presidents, business leaders and conquerors and realize what a fool I was to not pay attention. Of course I could blame the boring teachers, but in all honesty my teenage brain was just too close-minded to care.

Some of our favorite games over the past year or so have been history-related. We love playing The Manhattan Project (features the world’s race to develop atomic weapons), 1812 (covers the U.S. invasion of Canada) and Lembitu (about the Estonian leader). We’ve even recommended a number of them to teachers for use in the classroom! I know I would have paid more attention if we were playing games instead of reading from a decade-old textbook… 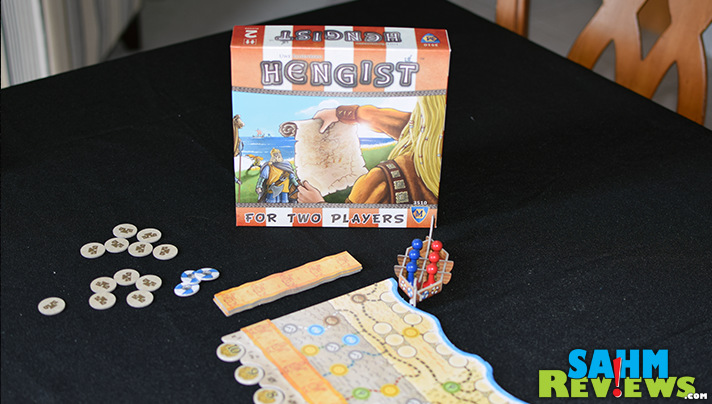 So when we found out about Hengist by Mayfair Games, we knew it was another opportunity to learn a little more about someone from European history. Hengist was one of the two Germanic brothers who led the Angle, Saxon, Frisian, and Jutish armies that conquered the first territories of Britain in the 5th century. Tradition lists Hengist as the founder of the Kingdom of Kent. Hengist and Horsa (his brother) arrived in Britain as mercenaries serving Vortigern, King of the Britons, and this event is traditionally recognized as the beginning of the Anglo-Saxon invasion of Britain. The rest, as they say, is history. 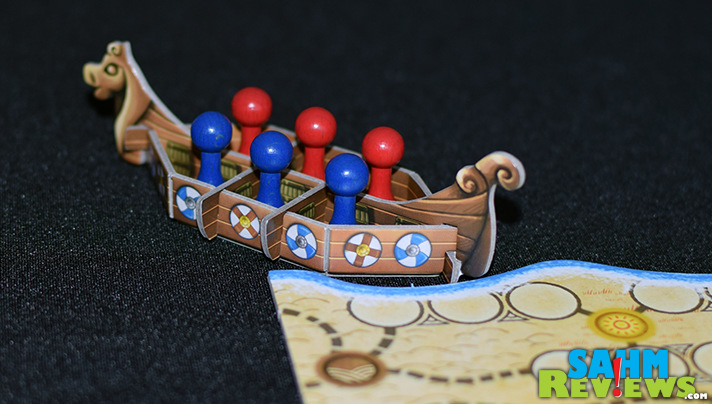 In the game of Hengist, you and an opponent take on the roles of these two brothers, who have recently become discouraged by the low pay they are given while they are protecting Britain. Now you are taking matters into your own hands and using your resources to pillage the towns and villages you were originally hired to protect. And while you are working together from the same ship (look at the cute 3D boat you get to construct!), you are also competing with your brother to gain the most fame and fortune!

Included in the box are three double-sided map tiles which are randomly laid to create a custom map for each game. Your ship is docked at the western-most bay, which is where you’ll begin your expedition. 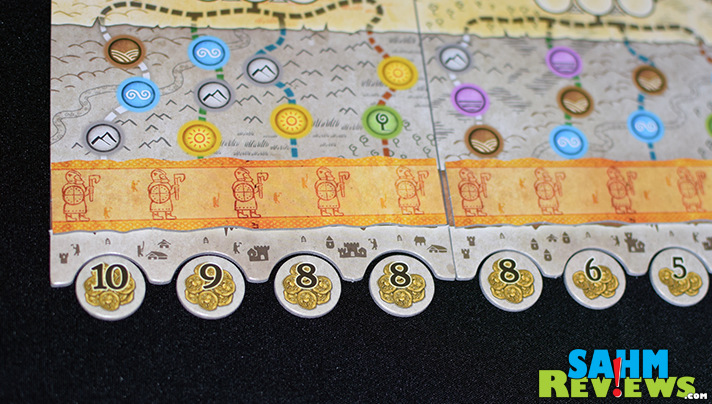 On each turn you perform one action with each raiding party. You can deploy them to the beach or move them off the beach down to the hinterlands or into a village (or upwards on the map if desired). To move, you must play a card (or cards) that match the symbols on the route. This deployment off the boat or movement on the map constitutes the turn for that party. Once you have moved all parties, your turn ends and you draw two cards plus an additional for any party in the hinterlands.

Once you have entered the hinterlands, it will be time to journey on to a village for pillaging. There are four paths to choose from, each with a different card requirement. You are able to see the treasure value of each village before you make your decision on which path to take, but because of the unrevealed road tiles, you do not know exactly where each path will take you. Only once you have paid the fee can you look at the underside of the tile, discovering which village you arrived at. Take the treasure and then put your raiding party back into the hinterlands. 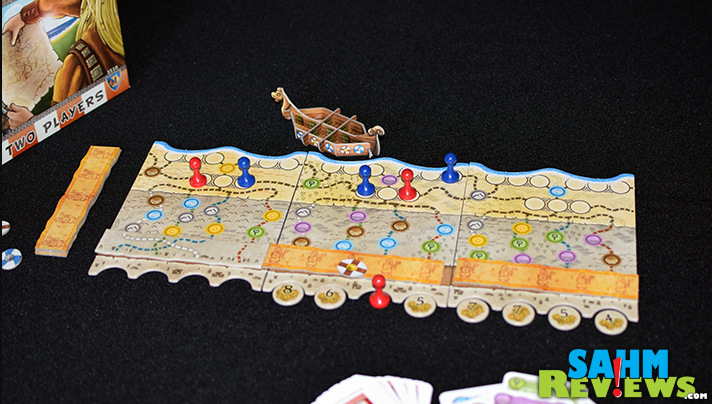 There are three different types of cards you might receive. A single Terrain card that you are trying to match towards the symbols on the board, a double Terrain card which can be played as either depicted type and an Explorer card which has a couple of uses. 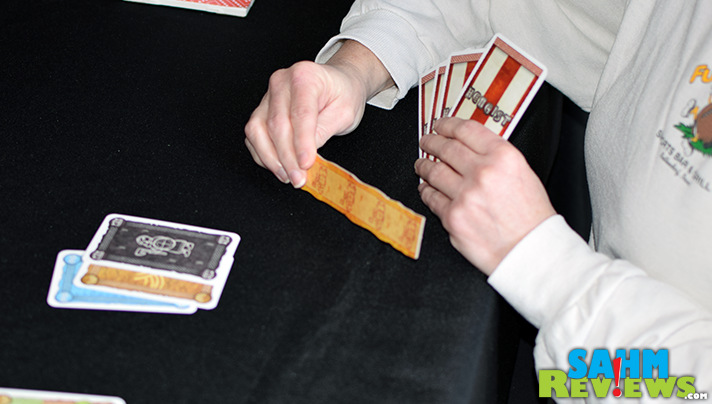 You can use the Explorer card as a wild card for any terrain type, as a spy to peek at any road tile in play or as reinforcements to put raiding groups back in your ship that you many have lost along the way (more about that in a minute). Any time an Explorer card is played, the boat is then moved eastward to the next bay. 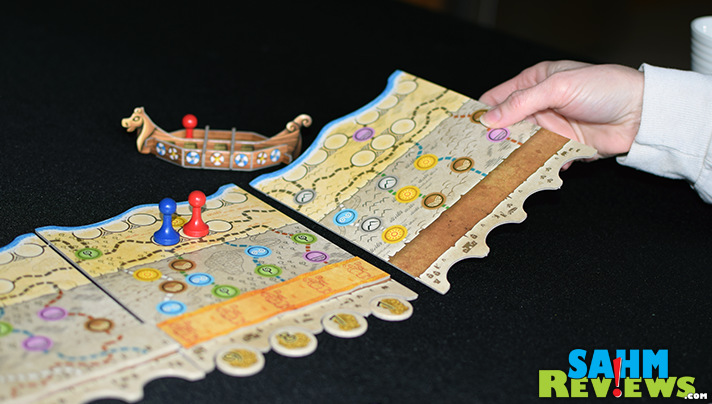 When the sixth Explorer card is shown, the boat would appear to move off of the map. This isn’t so! Take the left-most map tile, remove all of the pieces on it and flip it over to place next to the right-most map tile. This new section is then populated with new treasure tokens and a road tile and the ship moves to its first bay! If you or your opponent had raiding parties on that old map tile, they are now lost and returned to the box. The only way to retrieve them is to play another Explorer card to put them back into the ship.

You and your opponent (Hengist is a two-player game) take turns until the twelfth Explorer card is played, which would move the ship off of the sixth map tile. At that point the game immediately ends and the person with the most treasure collected wins the game! 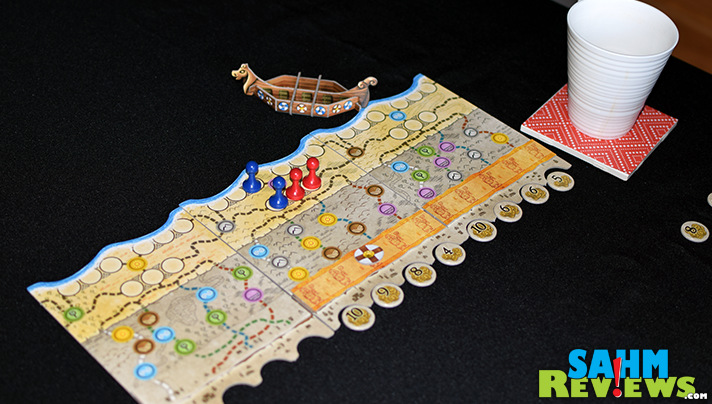 We found Hengist to be quite fun and a fantastic filler game for two players that only lasts around 30 minutes. Because of the limited number of paths and treasures, it was quite easy to interfere with your opponents plans during your race to the villages. A bit of luck is needed when drawing cards, but even a bad hand shouldn’t cripple you – there are always other paths to take! And for around $25 is a solid bargain if you’re missing a good 2-player title in your collection.

Who is Mayfair Games? You’ve no doubt heard of their best-selling game, Settlers of Catan, but probably didn’t realize they have scores of other titles under their wing. Be sure to check out their current games on their website and follow Mayfair on Twitter and Facebook to learn about what they’re working on next!

11 comments on «The Positive Side of Pillaging»