If I’ve said it once, I’ve said it a thousand times. If teachers had used creative techniques in the classroom to teach what I considered ‘boring subjects’, I might have paid attention better. Fortunately I was a good test-taker and could just skim the textbook the night before and count on an “A” grade. Of course none of the principles stuck with me and I find myself relearning things I shouldn’t have to.

Things have definitely changed for my girls. An iPad in the classroom is nearly mandatory. Various 3rd party apps have become the norm for learning science, social studies and more. Many teachers don’t even create their own lesson plans any longer – they simply purchase them from one of the various education services. My oldest told us of one day last week where the science teacher didn’t even bother to stop by their table all period to see how they were doing. A whole class without any instructor interaction.

And there’s no reason for that. There are so many more resources and tools available today than at any time in history. Case in point, a couple months ago we told you about Peptide from Genius Games. Peptide is a semi-complex card game about building amino acids and peptide chains. Yes, before playing it I had to look up what they were. If I had only paid attention…

Genius Games has other titles in their library, and ones that I knew a little more about. Linkage is billed as “A DNA Card Game” and focuses on trying to build correct RNA strands that match the DNA template. I have read “The Language of Life” and have contemplated utilizing the services of 23andMe to discover more about my health and ancestry, so anything that would help me understand the basics behind how DNA is structured is of great interest to me.

Linkage is much easier to learn that Peptide, but that doesn’t make it any less fun. In each game a custom DNA template is created and you strive to replicate it with your own RNA strand and score based upon how accurately it transcribes the template. 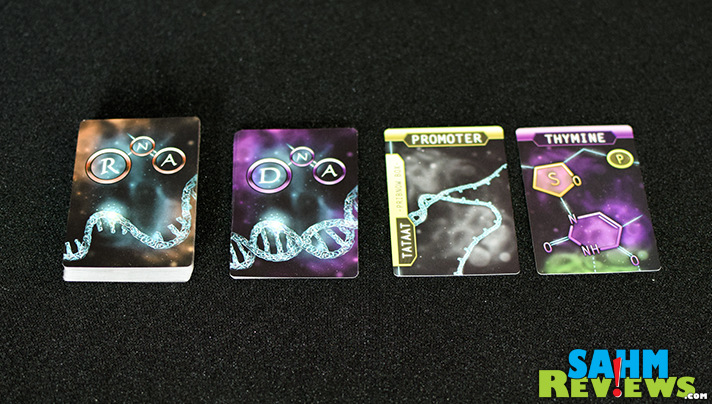 There are two decks of cards – one for DNA and the other for RNA. Every DNA strand starts with a Promoter, and that card is placed next to the deck of DNA cards. On each turn, you will draw a new DNA card and add it to the right of the previous card, adding to the strand. Randomly seeded in the deck is the Terminator card, which signals the end of the chain (and the round). 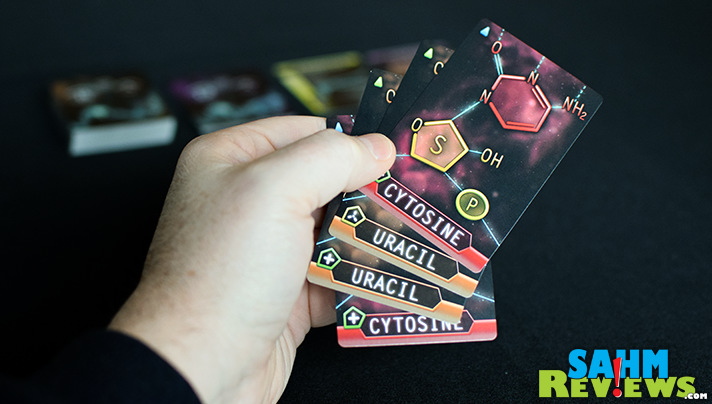 Working from a hand of four RNA cards, you must try to build in order an RNA sequence that matches this DNA template. The cards are not an exact match, however, and this is where you will learn which RNA compound pairs with which DNA counterpart. Fortunately the designer has given us visual clues until we are able to commit them to memory. Most obvious is the match of the background pattern when you place an RNA card underneath a DNA card. On each RNA card there is also a small colored triangle that will match the title bar of its corresponding DNA card.

On your turn you draw a new RNA card into your hand and then perform one of three actions. Either add a card from your hand to your RNA strand, repair your strand by removing an inaccurate card and replacing it with the correct one from your hand (these are specially-marked cards) or mutate an opponent’s strand by stealing one of their cards, placing it onto your strand and replacing theirs with another specially-marked RNA card. 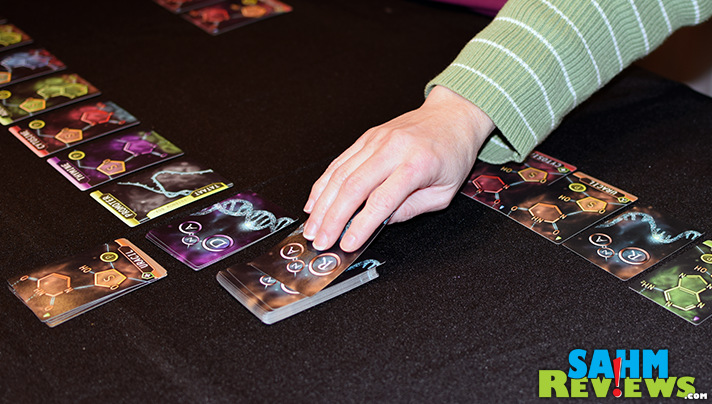 There are also two DNA mutation cards used in the advanced game that allow two additional actions to choose from. Discard this mutation card or any two RNA cards and you can draw the top two cards from the DNA deck, use one to replace one of the cards in the DNA template and then put these two DNA cards you are holding onto the top of the deck in any order. 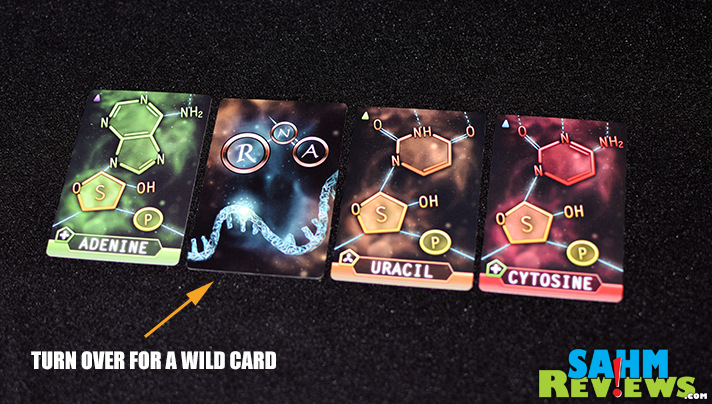 Or…you can play any RNA card in your hand as a wild card by turning it upside-down. This counts as a correct placement during scoring for sequences, but you’ll lose a matching bonus. 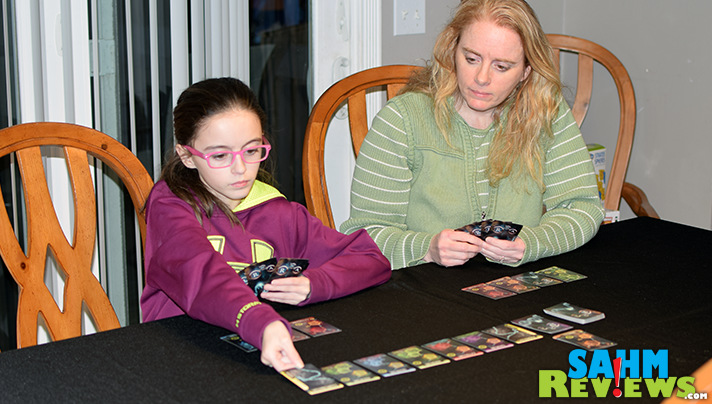 Linkage is played over three rounds, and each round is scored when the Terminator card is played. Receive two points for every card that exactly matches the correct card in the DNA strand. You also receive progressively higher points for each correct consecutive sequence of RNA cards in your strand. Wild cards count towards this bonus, but do not count as a match for two points. The highest score for the round begins the next round!

If you’re a teacher, I implore you to consider implementing games like Peptide and Linkage into your classroom. It’s hard enough to remember the differences between Guanine, Cytosine and Adenine, much less recall how they factor into RNA and DNA. With games like Linkage, our kids will learn without realizing it!

You can find Linkage on Amazon for under $15 shipped, a small price to pay for our childrens’ education. Genius Games has a couple other games in the works for 2016, so keep an eye on their Facebook and Twitter timelines to find out what they’ll be about!