When we use the term “hobby games”, we’re referring to the brand new segment of the game world featuring titles that you cannot find at your local Walmart. These games are usually 1-2 hours (or more) in length and are typically targeted towards males over 14. They typically require a decent amount of strategy as well as good math aptitude and come in almost any theme. There are history-related games, card games about science and even ones perfect for the home or classroom. Sadly, only a very small percentage of people have ever experienced board games outside of Monopoly and Chutes & Ladders. The entire point of our game series on SahmReviews is to introduce the general public to an amazing and diverse world of tabletop games.

We have encountered the same old excuses from friends about it “looking too hard” when we try to introduce a more advanced title to them. In reality, these types of games aren’t any more difficult than Chess or Stratego, it’s just a new type of game entirely. You’re probably used to playing what the industry calls “roll and move” games – roll some dice and move your pawn and do whatever is on the space. This was typical of most games in the 20th century, but fortunately the industry has evolved quite a bit. Rarely are dice used in hobby games (also known as ‘euro games’). In fact, your ‘movement’ is decided solely by you – and you have multiple paths to choose from! Efficiency is the key, and the better you are about planning your actions a few moves ahead the better you will do at the game. 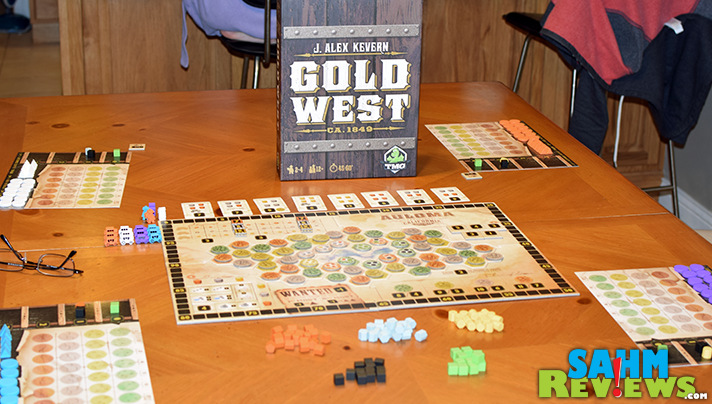 After testing out hundreds of titles over the past few years, we recently came across Gold West by Tasty Minstrel Games. And let me tell you, it has become our de facto standard of the perfect introductory to the world of hobby games.

First let’s take a look at the theme. You play as a miner in the old west, searching the land for places to uncover gold, silver and copper. Harmless enough for any age (no zombies here!). Your obvious goal is to be more successful than the next player, and like any good euro game there are multiple scoring paths to take.

Then there’s the board. You assemble the puzzle-like board and randomly place the inner tiles, so every time you want to play the map is different. One of the scoring options (Boomtown) is also seeded randomly, adding to the variability of the game!

Each player also has their own player board to keep track of their own mine. On each turn you will gain goods (either mined or raided) and place them on your board. If you’ve ever played the ancient game of Mancala, you’ll recognize the movement mechanism used to get your goods out of the mine. The further down you place them in your mine, the more points you immediately receive – but they will also take longer to get them out and able to be used for other purchases. 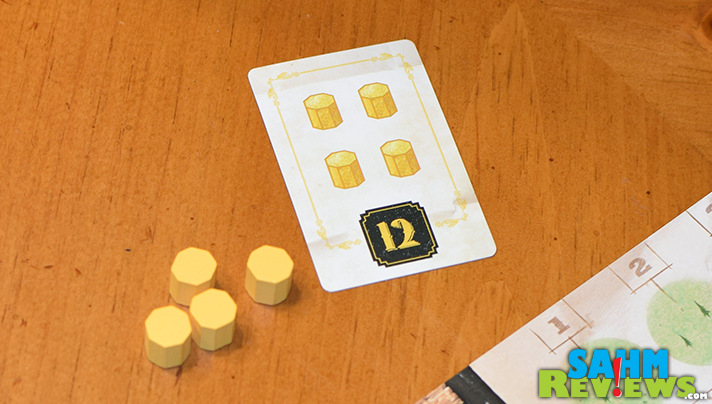 As mentioned, there are multiple ways to score in Gold West. Not only do you receive the above-mentioned points for placing ore in your mine, you also can spend them once they are brought to the surface. You might use them to purchase items in Boomtown (which are typically end-game bonuses), ship them to buyers using stagecoaches or fulfilling contracts worth points and awarding various bonuses. 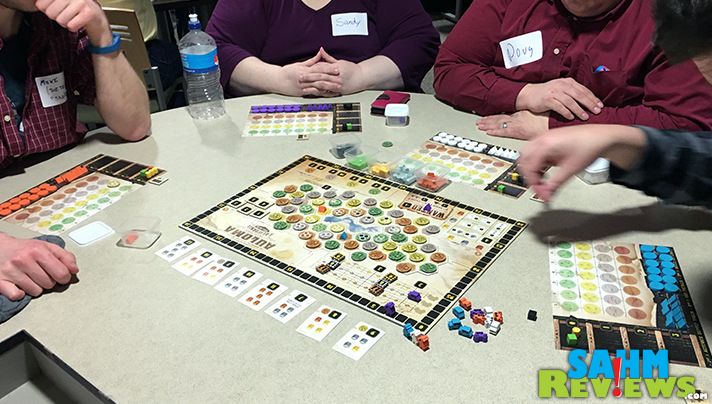 While mining, if you are able to gather wood and stone, you can build camp on the map in new locations and gain influence in those regions. Building camps adjacent to each other also awards bonuses for the longest contiguous campsite you possess!

Lastly, there are penalties for not being able to successfully build campsites (raiding) and the person who does so the most becomes the “Most Wanted” and loses points equivalent to the number of failed campsites.

Gold West is played over 10-12 very quick rounds depending on the number of players (up to four). And because you can expect a game to last only around 45 minutes, it solidifies our justification of this being a perfect intro game for new players to hobby games. Easy to teach, quick to play and always very close end-game scoring makes it a solid choice for anyone. 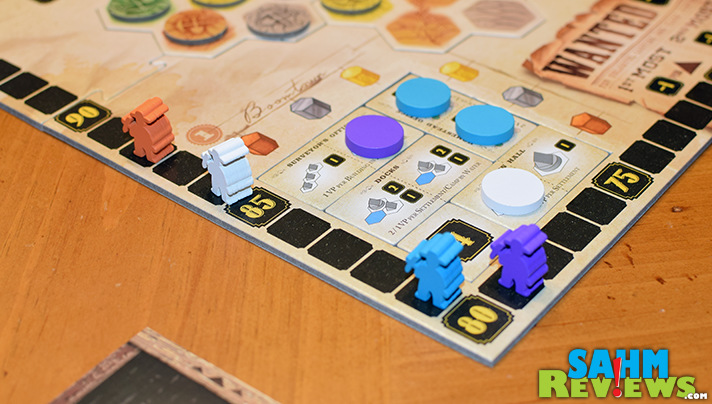 You’ll find copies on Amazon for under $45 and watch for seasonal sales that might bring you extra savings. Even at the full retail price of $59.99, Gold West should become a cornerstone game when you need something lighter to teach to new players. Take note of the publisher – Tasty Minstrel Games. We have yet to find a title from them that disappoints, and the quality of the components shows they are not cutting corners at all. Watch their Facebook and Twitter timelines closely as they regularly have special savings that last for a short time! We were able to score gift copies of Martian Dice last year for less than half of normal retail!

Have you tried playing a hobby game yet? Which one? Or what’s your excuse?!