We’re always pushing our girls to test themselves with new strategy games, hoping they’ll sharpen their minds and critical thinking. They have had great success against both us and other adults during our weekly game nights at a local college. We’ve also had the opportunity to expose them to card and trivia games that have helped their overall knowledge of math, history and the like. But in the game I’m going to show you today, the girls received both! Expedition: Famous Explorers from Grey Fox Games / 8th Summit combines a fun-to-play strategy game with real-world trivia about famous (and not-so-famous) explorers of the past. 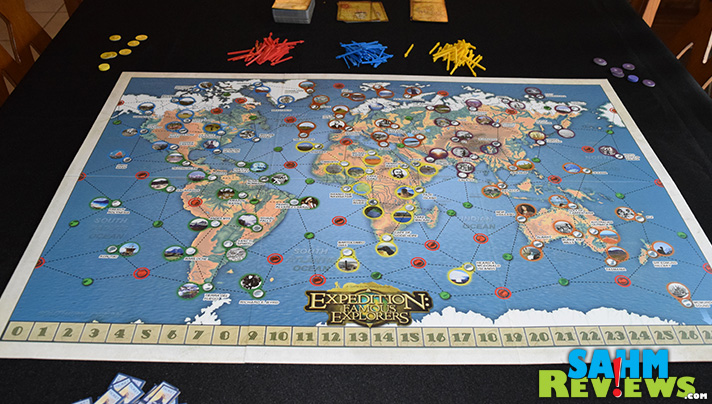 Originally a Kickstarter project in 2013, nearly 450 people pledged to help bring this title to market. It definitely didn’t hurt that it was designed by legendary game designer Wolfgang Kramer. Mr. Kramer was born in Stuttgart in 1942 and has published over 100 games – working full time as a designer since 1989. He is a 5-time winner of the coveted Spiel des Jahres (Game of the Year), as well as winner of numerous other awards. Expedition was first published as Wildlife Adventure in France (with an Animal theme) and then later as Expedition (with an archeological theme) by both National Geographic and Queen Games. English editions of the original Expedition are now very rare. 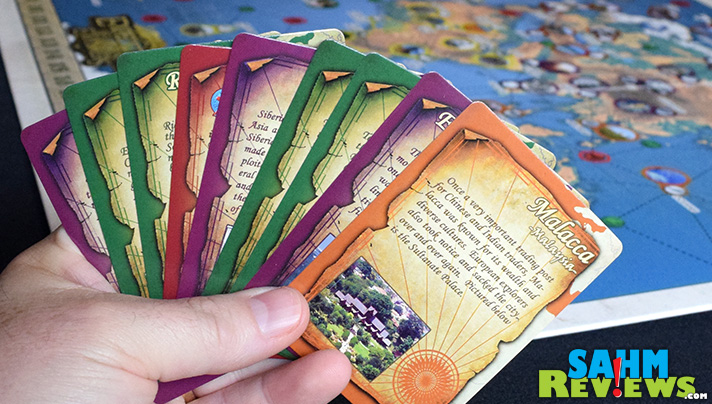 Rather than playing as an explorer, each person is trying to get one of the three explorer teams to travel through their locations. At the beginning of the game every player receives a hand of cards with different locations corresponding to points on the map. 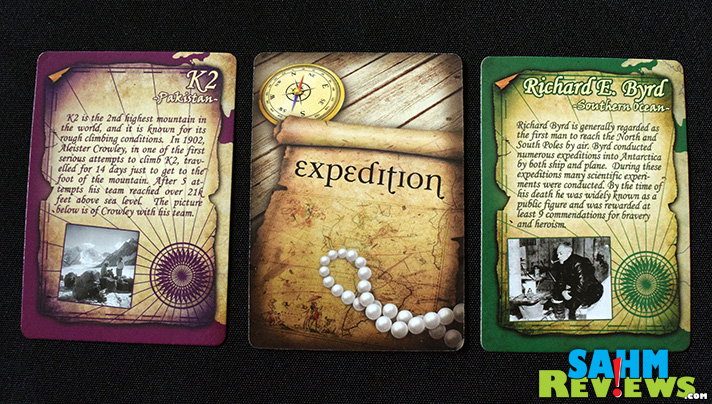 Each card has a paragraph or two about the location, its importance in the world and tidbits about its discovery. 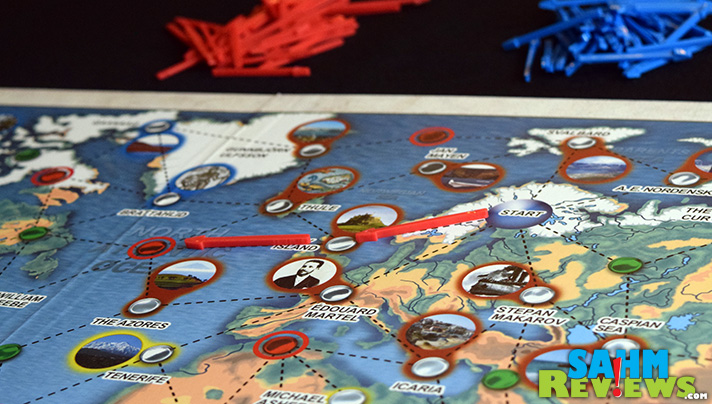 From your hand of cards, you select a number of ‘important’ locations that will yield extra points if one of the three paths travel through them. These are marked on the board for all players to see, the rest of your locations are known only to you. All three Famous Explorer teams start at the same location in Europe, and every player adds an arrow to their paths on each turn. 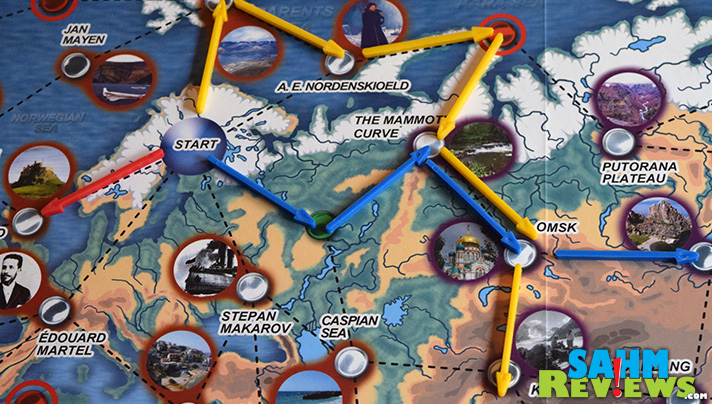 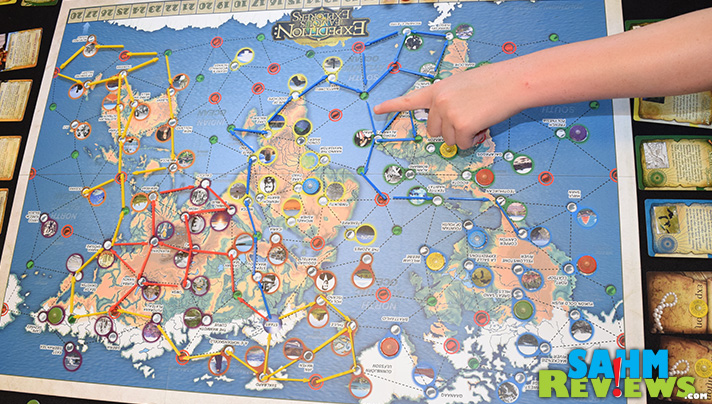 Adding to the complexity is the ability to create loops. If an expedition’s path becomes a closed loop, it may now continue from any point in the loop. From a strategy standpoint, this is a very important option. Especially if the paths have been led away from your cities by your opponents. 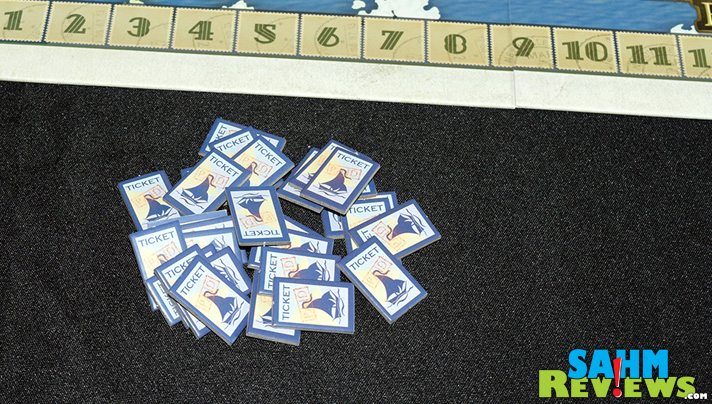 Not all points on the map are cities, some are simply represented by green or red dots. When you lay an arrow and it ends on one of these, a special event occurs. If it is a green dot, you immediately get to play another arrow at the end of any of the three paths (think of it like an extra turn). If a red dot is your stopping point, you collect one of the cardboard Tickets.

Tickets have special uses, and a player must choose how they will implement them. They can be used to purchase an Event card or an Explorer card, you can add or remove an arrow from any Expedition or you might choose to discard an Expedition card from your hand, draw two more and keep the one you like the best (trying to receive a city closer to the end of the current path). 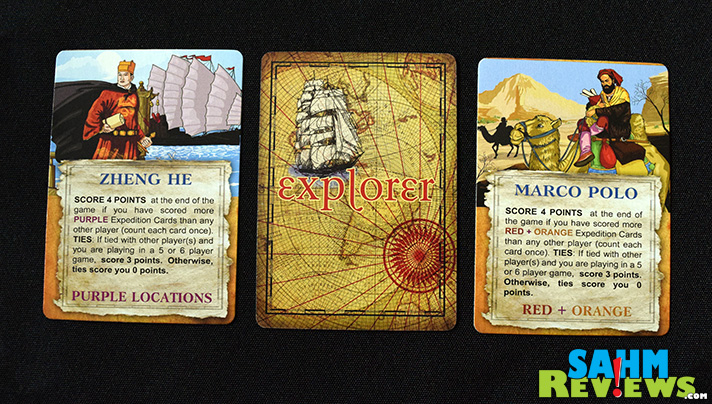 Event cards add a bit of randomness to the game by allowing you to perform a number of actions. You might get to draw additional Expedition cards, gain victory points or even deduct a point from the current leader. Explorer cards give you quests that award additional point bonuses at the end of the game and may be just enough to turn the tide. 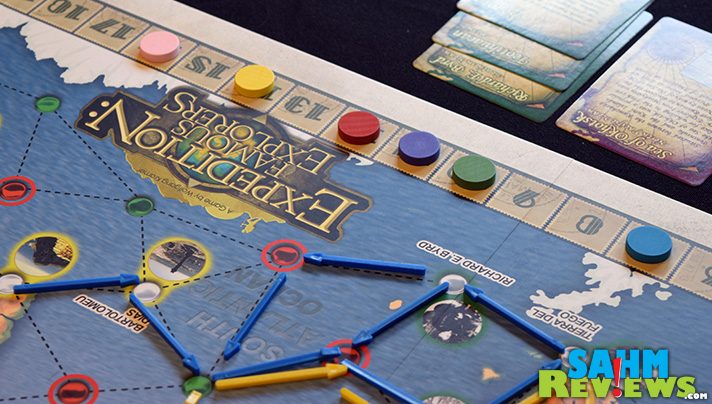 The game continues until either all arrows are placed on the board or one player has completed all of his or her Expedition cards. Each completed destination is worth one point, while the previously-mentioned ‘important’ destinations are worth two each. Players lose a point for every card in their hand they did not complete and an additional point if any of them were their ‘important’ destinations.

Expedition: Famous Explorers isn’t a high-scoring game, and you’ll find every round to be very close. There is an option to play an easier version without the Event and Explorer cards, but we recommend including them to give you an additional goal to achieve.

If you’ve ever played the best-selling Ticket to Ride, you’ll find some similarities in the path-laying process, but that’s where the likeness ends. In Expedition: Famous Explorers everyone works off the same three paths and no one owns them. Your sole goal is to steer the explorers to your city or landmark while preventing them from finding your opponent’s.

Our verdict – a ton of fun. This is a perfect example of an under-appreciated game with good mechanics and fantastic social interaction, especially when your opponent ruins your best-laid plans by veering off in a different direction. It is a constant tug-of-war to lure one of the teams to your cities. Originally available at a retail price of $50, you can now find them brand new on Amazon for $35 shipped!

Take a moment to check out Grey Fox’s lineup of other great titles, including their long-awaited Champions of Midguard, a highly anticipated Viking-related title that will be available in limited supply at Gen Con and available at retail in late September. They’re pretty active on both Facebook and Twitter, that’s where you’ll get their news the quickest. 8th Summit also has a few other titles worth perusing on their website. And if you’re headed to Gen Con, be sure to stop by their booth to see their games in person!