Before we moved back to Iowa from California, we decided to take a vacation to Hawaii. We knew it would be much cheaper to fly out of Los Angeles than to wait until later and have to make a connection there anyhow. We chose to stay in the North Shore region and ended up enjoying a full week at Turtle Bay Resort, the same hotel where the film, Forgetting Sarah Marshall, would be shot shortly thereafter!

Each day we would drive up and down Kamehameha Highway as we visited various location throughout Oahu. One day we stopped at a roadside stand to pick up a fresh pineapple to take back to the hotel. The vendor had samples to try and we were amazed at the quality and flavor coming from his yellow fruit. The gentleman laughed and proceeded to tell us “a secret”.

He claimed that all pineapples grown in Hawaii are given a rating of “A”, “B” or “C”, much like you would find ratings on beef of “Prime”, “Choice” or “Select”. He bragged that C-grade pineapples are sent to the factory to be cut and put into the cans at your grocery store. B-Grade pineapples were kept whole and are the ones in the fresh produce section. What about A-grades? “Us Hawaiians save the best for ourselves!”

Ever since, I’ve made a point of buying direct from farmers whenever I can. I’ve seen it time and time again – the best apples, the best corn, the best whatever can only be found direct from the source. It makes sense that they’d want to offer their highest quality product for sale individually. Sure, you pay a small premium. But the difference in quality is something you have to experience for yourself.

I was reminded of this tale specifically while playing Tasty Minstrel Games‘ new Citrus board game. We originally chose to pick up this title because it was produced by the same company who brought Gold West to life. Even though that one has been available for well over three years (forever, in the board game world), it is still our go-to game for introducing new players to the wonderful world of hobby board games. Citrus may change that. 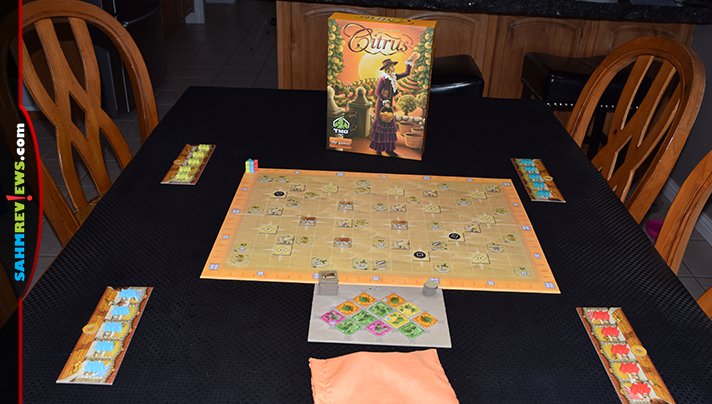 We don’t have many (or any?) citrus farms here in the Midwest, but do recall quite a few from our decade in California. In this Citrus game, we are farmers of citrus plantations who are vying to earn the most income (points) by building plantations, harvesting them and clearing landscape.

Setting up the game is pretty quick. The large board is unfolded and populated with random face-up landscape tiles on the sections marked with green landscape. Fifteen Finca Tiles (fincas are the main building on an estate) are mixed and four are drawn and turned building-side up and placed on the spaces marked “A”, “B”, “C” and “D”. The rest are stacked into a pile and placed on the Plantation Market board. The Building Site Tiles are also mixed, with three revealed and placed on the matching letters on the board. These will be the three spots that players may choose from to build the next finca.

Ninety Plantation Tiles are placed into the included cloth bag and twelve are drawn to fill the Plantation Market to start the game. All players (Citrus supports up to five) choose a color and take a player mat, a money marker and six worker meeples in that color. One of the workers is used on the main board to track your score, while the other five are placed on the player board in the five open spaces. All players begin with six coins, which is tracked by placing the money marker over (and surrounding) the “6” on their board. 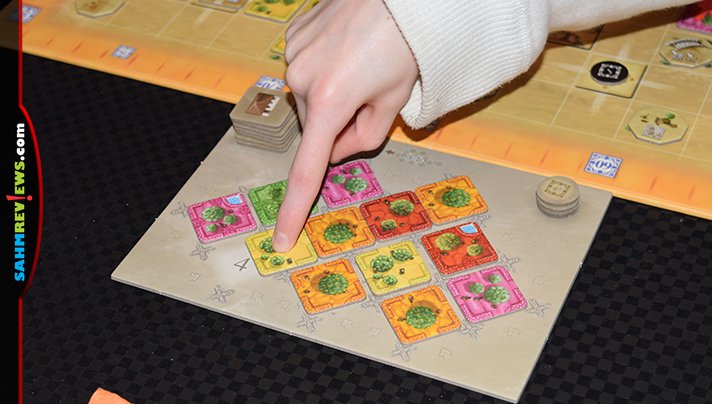 On your turn you only have to choose from two possible actions! Your first option is to build. To do so you must buy plots from the Plantation Market. It isn’t as simple as strolling into the market and choosing something to plant. You might have noticed how uniquely the Plantation Tiles are arranged – you must purchase an entire row at a time! This means you must have the funds to pay for up to four tiles, which cost one coin each. You also must be able to legally construct them on the main board or be assessed a penalty of three points for each tile you cannot lay! 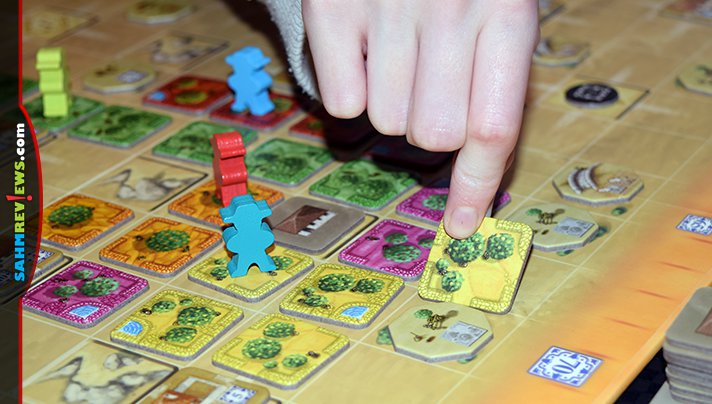 As you might imagine, there are special planting rules also. You can only lay a new tile adjacent to a constructed finca or next to an identical Plantation Tile that you own. All fincas (and finca construction sites) have four roads leading from them. Each road must have a different citrus type planted on it (there are five total types in the game of Citrus). Additionally, you cannot build on rocky areas! So be certain you can place all the tiles you purchase or you’ll be moving backwards on the score track! When you build a new plantation area, place one of your workers on it from your player board. 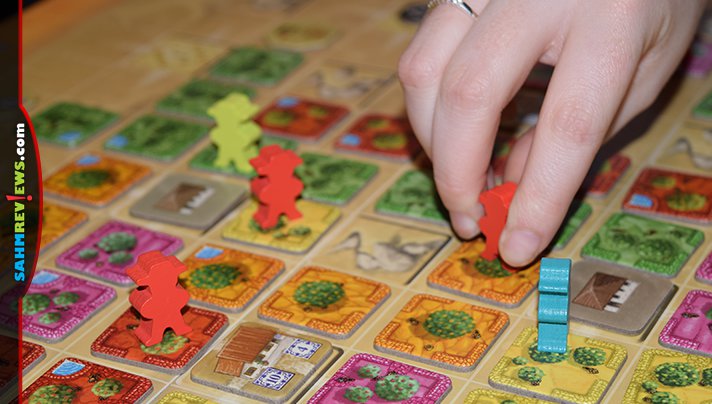 The other option you have on your turn is to harvest one or more plantation areas. This is the main way of earning money in the game, which you’ll need to purchase additional Plantation Tiles. Remove one or more of your workers from the board and receive points for the number of connecting tiles in each plantation (two points for tiles with a water well on them). The workers are returned to your player board and then you receive income determined by the number of workers not in the fields (on the board). Move your money marker up, keeping in mind that you may never possess more than twelve coins. 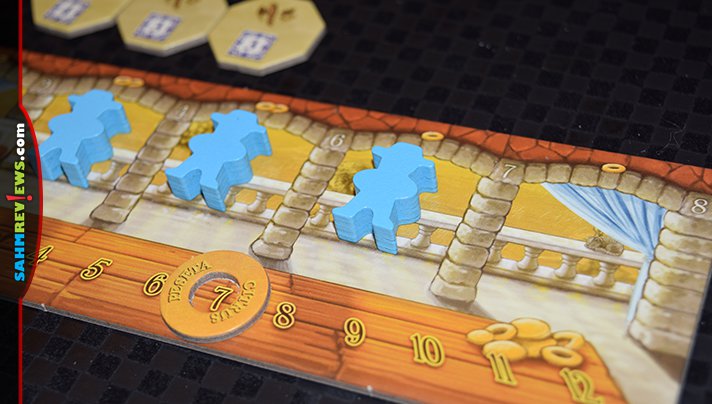 After taking either the build or harvest action, it is the next player’s turn to do the same. Turns can be pretty quick, which keeps the entire game at around an hour to play. Any time the Plantation Market is down to three tiles or less, a new Finca Tile is revealed and built in one of the three valid locations by the current players. A new Building Site Tile is then turned over and placed on the board, opening up a new area to build in. Then the market is refilled with new tiles from the bag. A game of Citrus is played until all Plantation Tiles are built, which ends the game immediately. 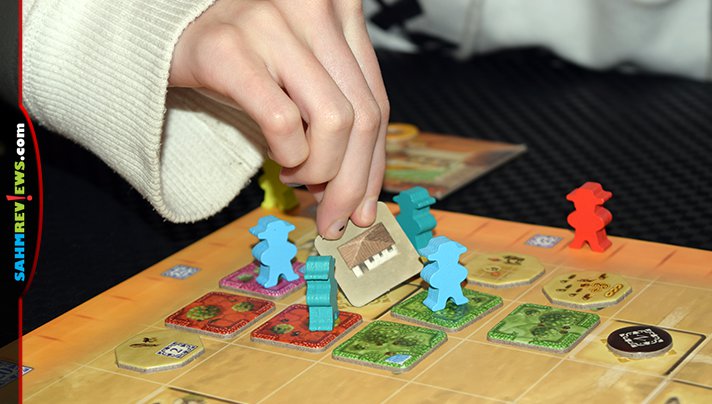 At any time while building Plantation Tiles, if a finca becomes completely surrounded on all sides, including diagonally, by Plantation Tiles and/or Landscape Tiles, it is scored immediately. Each Finca Tile has two numbers printed on it. The player who has the most tiles in plantations adjacent to the finca will receive the higher number of points and whoever has the second-most is awarded the second place points. If tied, both players receive the full amount with the next award being ignored. The Finca Tile is flipped over to remind everyone that its points have already been awarded.

You might have already figured out that if you harvest a plantation before its connecting finca is scored, you won’t get to reap the reward since your worker is returned to your player board. You have to time when to harvest and when to leave them in the field if you’re in the running for most tiles. Since you must take one of the two available actions each turn (build or harvest), your hand may be forced to harvest an area you don’t want to if you’re completely out of money (I speak from experience in this instance…).

Along the way you may build on the Landscape Tile areas and will receive the tile immediately. You can save these tiles for use at any time during your current turn or a subsequent turn. These tiles may award additional money, allow you to construct a new finca or take a Plantation Tile at no cost and build it right away! One tile features a bull that you can put in any open space on the board, which may cause a finca to be immediately scored if placed in the last of the eight surrounding spaces!

Once the last Plantation Tile has been built, final scoring commences. Any unscored (unsurrounded) fincas are now scored, but with a new rule. Only the player with the greatest number of tiles in plantations adjacent to the finca will receive points, and only the lower of the two numbers. There is no second place awarded! Any plantations that haven’t been harvested are done so with players receiving one/two points per tile as usual. Collected Landscape Tiles that have points on them are scored and any others that weren’t redeemed during the game are worth one point each. The player who is furthest on the score track is the winner of Citrus!

As we expected, Citrus may displace Gold West as our go-to game to teach to new hobby game players. It features forward-planning, player interaction and light strategy in order to be successful. Combined with gorgeous artwork and very high quality components, it is a bargain at under $50 on Amazon.

We’ve taken a sneak peak at what Tasty Minstrel Games has planned for 2019 and we think you’ll be very excited with what’s coming to market very soon! Expect to see games set in space, ancient Rome and even another one set in the old west! That doesn’t even include the upcoming Kickstarter campaigns they have in the works for their Deluxified line! Be sure you are following them on Facebook or Twitter so you don’t miss out on any of them!

Have you ever visited any type of citrus farm?