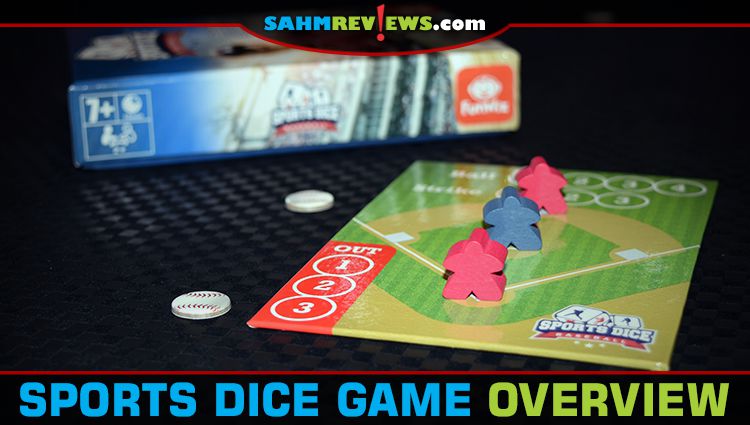 We’ve talked many times about the trend of game publishers to start a new brand in order to reach a different market. Pressman Games recently founded Games Adults Play to carry a line of adult-themed party games. Grey Fox Games, known for deeper and longer board games, established Social Sloth Games for their shorter and kid-friendly titles. And our good friends over at Smirk & Dagger began using Smirk & Laughter for games that don’t have that “gotcha” feel. It’s a solid marketing strategy.

You’re probably familiar with FoxMind Games since they’ve been around for some time. We have Museum Heist, Get Rich Quick and Abalone in our collection and regularly play other titles by FoxMind at our weekly game night. They, too, have jumped on the subsidiary bandwagon with their new line of games under the name FunWiz. While FoxMind previously had a pretty extensive library of game types, this new venture appears to be focused on games of a shorter length (usually under 15 minutes).

The first two releases by FunWiz are both similarly themed in professional sport. Sports Dice – Baseball and Sports Dice – Football can be played in around 15 minutes and support two or more players, although they really are best with just two. Both are also rated for ages 7+, which seems pretty accurate to us, and use dice and a board to facilitate the game. That’s about where the similarities end.

Sports Dice – Baseball is a quick 3-inning game of, you guessed it, baseball. Inside the box you’ll find twelve custom dice, six colored meeples, four baseball tokens and a Power Token to be used to determine first player and break ties.

Each team chooses a set of meeples (either red or blue) and the Power Token is flipped. The winner of the toss decides whether they’d like to pitch or bat first. The pitching team receives six pitching dice and the batting team collects six batting dice along with the Power Token.

Both teams roll all six of their dice at the same time and arrange them by matching symbols. The player with the most of one symbol is the winner of the roll and takes the action shown on the die. If the pitching team wins, they might throw a Strike, an Out, a Double Play or even a rare Triple Play! The batting team might force a Ball, a Single, a Double or a Homerun. Each time the dice are resolved, teams will move the corresponding tokens on the board, just as in a real game of baseball. Three strikes becomes an out, four balls becomes a walk. 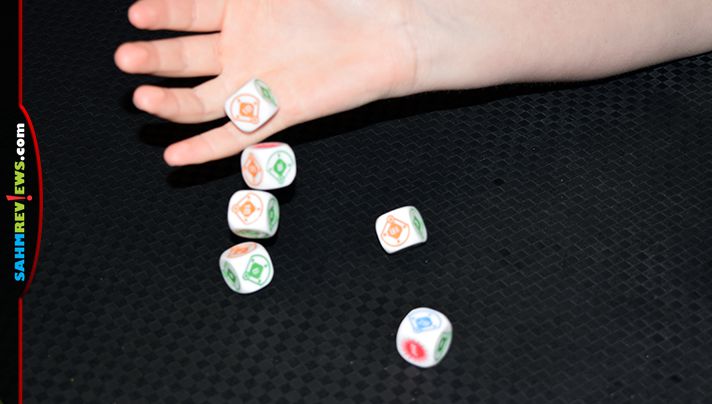 If there is ever a tie in the die roll, the player with the Power Chip gets to decide if they want to break the tie or not. If they do, they’ll pass the token to the other player who gets to decide the next tie. If they decide not to use the token, their opponent wins the tie, but they get to keep the token for next time! 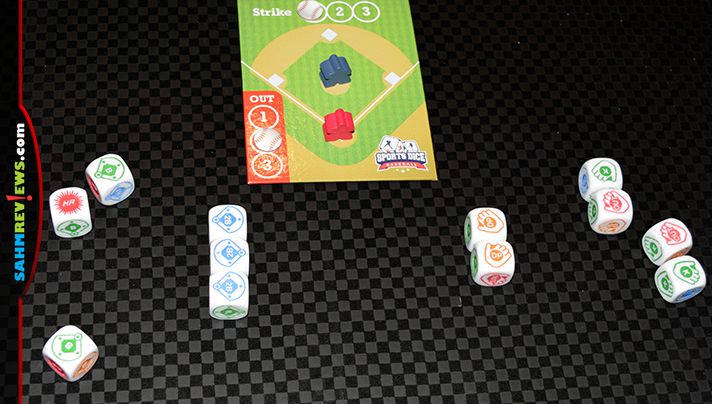 Meeples are moved around the bases as runners and remain until the batting side gets their third out. Total runs for that inning are recorded on the score sheet and players switch dice and play the second half of the inning. A full game of Sports Dice – Baseball lasts three innings and the player with the highest score at the end of the game wins! If there is a tie, play extra innings! 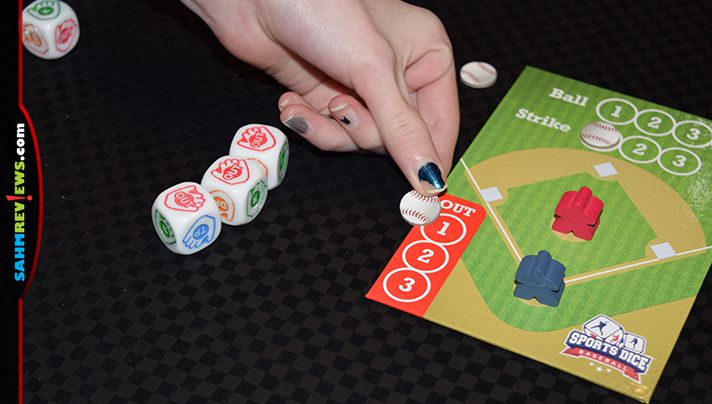 You’ll find Sports Dice – Baseball at your local game store or on Amazon for under $15!

By now you get the general idea of how the Sports Dice line is played. Sports Dice – Football utilizes the same dice mechanic found in the baseball version. The twist comes in how the game is played since it tries to keep true to the professional sport.

Each player still receives six custom dice, this time labeled for offense and defense. Instead of a baseball field, the game includes a fold-out football field that players must make progress on. Again, a Power Token is flipped to determine who gets to decide whether to kick or receive at the start of the game. The Football Token is placed on their own 25-yard line and the rolling begins.

Both teams roll all six dice at the same time and arrange them into sets. The player with the most of one icon wins the roll, with ties broken by the Power Token in the same manner as before. The offense might get to move the ball 10 or 20 yards, kick a field goal or score a touchdown. Defense tries to hold them to No Gain, Sack the quarterback, force a Turnover or score an elusive Pick 6! 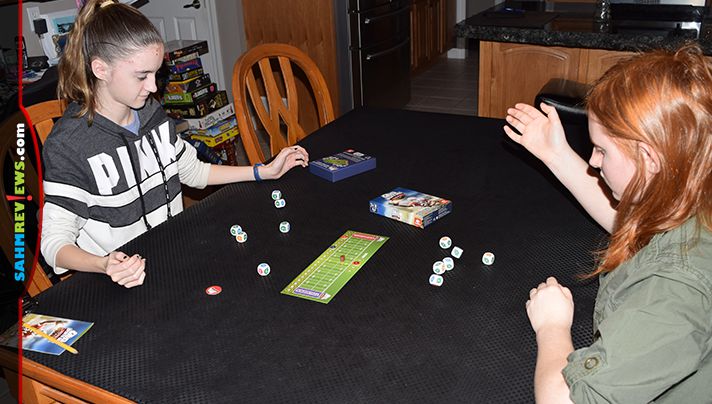 The offense has four downs to get the ball past the 50 yard line, where they’ll start with a fresh set of downs. Then they have four to get it into the end zone or elect to punt the ball. Punting involves simply rolling the dice again and adding up the total of all yardage results and moving the ball down the field. If it enters the end zone, the opponent begins on their 25-year line, otherwise it is considered a “fair catch” wherever the ball ends up. Two exceptions to this rule – if the offense rolls six 10’s, they successfully perform a fake punt and take the ball into the end zone for a touchdown! If the defense were to roll six NG’s (No Gain), they return the punt for a touchdown! 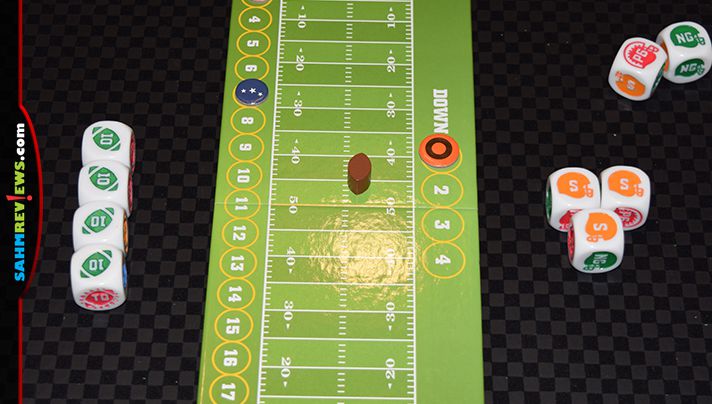 Field goals can also be attempted if the team is on the opponent’s side of the field. If they declare they are attempting a field goal and their roll (similar to punt where you add up the yardage) causes the ball to reach the back of the end zone (10 additional yards), then the attempt is successful and they receive three points. As with a punt, six 10’s by the offense yields a fake FG attempt and a touchdown. Six NG’s by the defense blocks the FG and they return it for a touchdown. 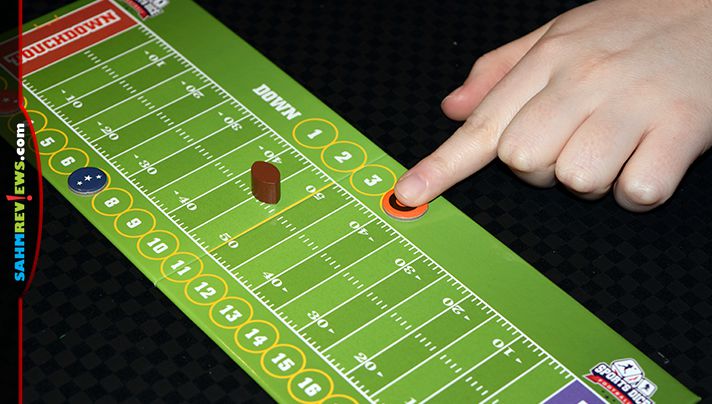 Just as rare as a blocked FG, a safety can be scored if the offense is backed up into their own end zone. The defense earns two points and possession of the ball! The game of Sports Dice – Football ends immediately when one team scores at least 21 points. This one can also be found on both Amazon and at your local game store!

If these two Sports Dice titles are any indication about the future of the FunWiz brand, things are looking pretty good. See what else FoxMind has in mind for FunWiz by checking out the dedicated portion of their website!

What other sports would you like to see featured in the Sports Dice line?