For those who know me, I don’t have a problem talking to strangers, joining in random conversations or putting a thoughtful story on paper. Since I was young, I enjoyed the art of crafting a narrative, as long as I could do it on my own schedule or was given prompts to inspire me. I still remember my favorite story from creative writing in high school. The assignment was to make up a fictitious being then chronicle a trip that character had taken. While my classmates shared adventures such as vacations to some remote ski lodge or exotic dream destination, I provided a more unique take on the task. My protagonist was named Cauli (Kelly) Flower and her trip was down the garbage disposal. I enjoy that type of creativity, but if I were asked on the spot to share something, I wouldn’t fare nearly as well. Improvisational story-telling – whether oral or written – can be difficult, but does become a little easier with practice and prompts.

A few years ago we told you about a couple of games, Snake Oil and Spinergy, that would be entertaining alternatives for teachers to incorporate into their lesson plans. Gamification of education switches things up a bit and can breathe new life into the classroom. Smirk & Dagger Games took this to heart when they released Before There Were Stars game under their Smirk & Laughter line. Not only is the game based around the art of storytelling, but they also created a Common Core Lesson Plan for ELA Grades 6-12 to go along with it. 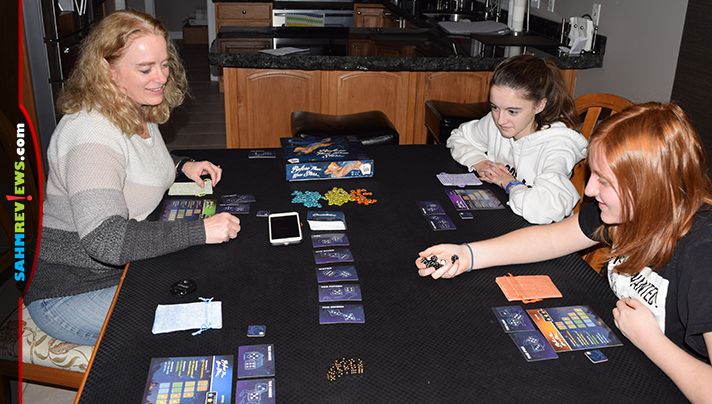 Before There Were Stars… takes place over four storytelling rounds called Chapters. Each Chapter is broken down into three phases which include the Stargazing phase, the Storytelling phase and the Appreciation phase. It’s basically an improv exercise, but it has dice and scoring so if your goal is to use it in an educational setting then you’ll likely get a better response by utilizing such a game.

Set up the game by giving everyone a 2-sided story card with the Myth side facing up along with the bag matching their card color and a Moon token. Create a pool of stars in the center of the table then shuffle the stack of constellation cards and place nearby. Determine the first player and give that person one set of the dice. Give the second player the additional set. Flip five constellation cards face up into the center to form a selection row and you’re ready to begin. 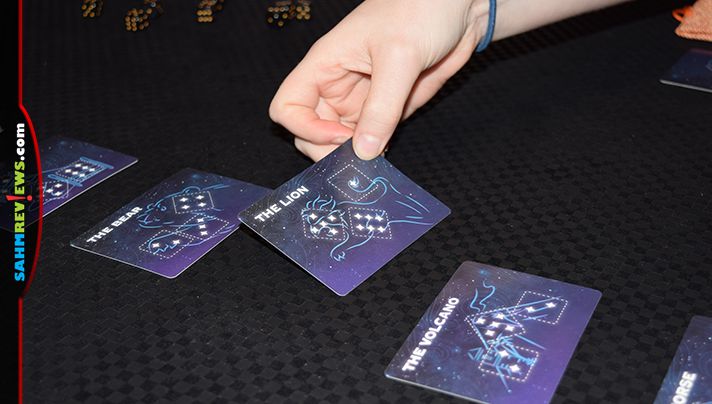 The first player rolls the dice and uses them to purchase one card from the row. This is referred to as the Stargazing phase as you’ll be drafting cards that showcase a word that is depicted by a constellation. This card will be the first topic that will help build the first player’s story. Herein lies the basis of the game: each round you will draft the number of cards as designated on the story card.

At the end of the round, everyone takes turns telling a story that utilizes the story board prompt for that round in addition to the related story cards. Stories should be about a minute long (give or take) per chapter. In the first Chapter, you’ll only have two ideas to incorporate into your story, but in future Chapters you’ll have to incorporate all the concepts that precede it. 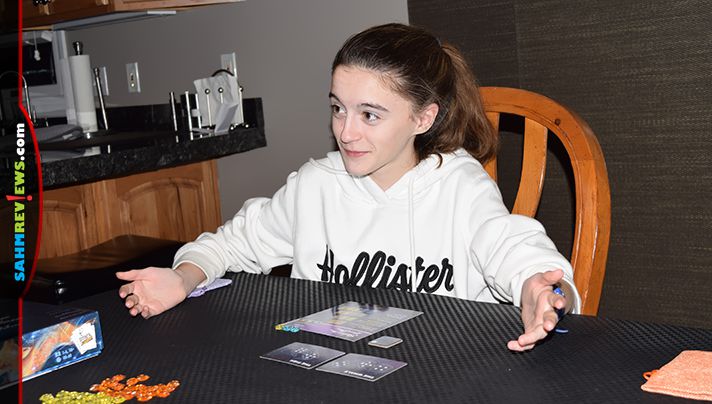 With only a minute to work with, this keeps the game moving while allowing players to craft an interesting yet abbreviated story that fits their topics. The goal is to create moments that connect with the audience in some way – whether that be a heartfelt emotional reaction, laughter or even fear. Before There Were Stars game is a game built on the types of drills and exercises that improv actors use to hone their skills or authors incorporate to work through writer’s block.

The final stage is the Appreciation phase. Each round you’ll start with a specified number of Star Points to award (one less than the number of players). It’s important to note that you should be listening to each of the other stories and find parts that resonate with you. Each player passes their Offering Bag to the player on their left then everyone simultaneously (and secretly) drops a star into the player’s bag based on which story had at least something in it they enjoyed. The bags are then passed to the left and the process repeated. You won’t be awarding yourself so each round you’ll have to decide who provided the most connection or interest for you as you give out the various stars of different values. Each player has an “Over the Moon” card which is one last bonus point to award based on their favorite moment in the game.

After all rounds are completed, everyone will tally their points to see who is the Master Lore Giver for the game. There are additional rules along with an option to utilize the back side of the Story Card to provide diversity to the game. As I said, it’s more of a literary exercise than a game, but there’s definitely room for it in a party setting if you meet with a creative group of gamers. Couple this with Mangaka or Cartooner drawing games and watch the creativity flow! You can pick up a copy of Before There Were Stars game on Amazon or learn more by gazing at the Smirk & Dagger’s website. You can also connect with them on Facebook and Twitter to find out what other games are on their horizon.

Do you enjoy games that allow you to show off your creative side?

19 thoughts on “Before There Were Stars Storytelling Game”