Christmas is just a few days away and by now you have all your shopping done, right? We found a number of great gift ideas in our Holiday Gift Guides and hope you found one or two also. One thing we’ve always prided ourselves on is our family-friendly attitude when it comes to playing games with the family. We may push the envelope in difficulty, but have always shied away from games with any type of explicit content. And the few times we’ve come across them, we’ve either been able to remove some cards from the game (Utter Nonsense) or given a stern warning to our readers that the title was strictly for the 18+ crowd (Bucket of Doom).

Peruse the shelves of any Barnes & Noble or Target and you’ll find a whole slew of party games that are clearly not meant for younger kids. Cards Against Humanity was one of the first to offer this type of mature content, but now there are scores of titles vying for the young adult audience, all promising a rowdy time of laughs and debauchery. Don’t get us wrong – we’re not prudes. We’re just selective about which games we play with our daughters and ones that we can enjoy with close friends.

We were discussing this separation with our friends at Pressman Games while getting a demo of their Oregon Trail card game at one of this year’s gaming conventions when they mentioned they had established a new product line under a completely different company name. Games Adults Play would specifically target an older audience with mature-themed board and card games and were debuting their first titles at the con. Since that time we’ve had the pleasure of trying out their first three games!

Second warning: THESE ARE NOT FAMILY-FRIENDLY GAMES!

Now that that’s out of the way, let’s take a look at what Games Adults Play is offering!

Of the three titles we’ve played by Games Adults Play, this on is probably the tamest. Friend or Faux is a game about asking questions and guessing their answer. Not just any questions though. Sometimes deep, dark secrets will be revealed. 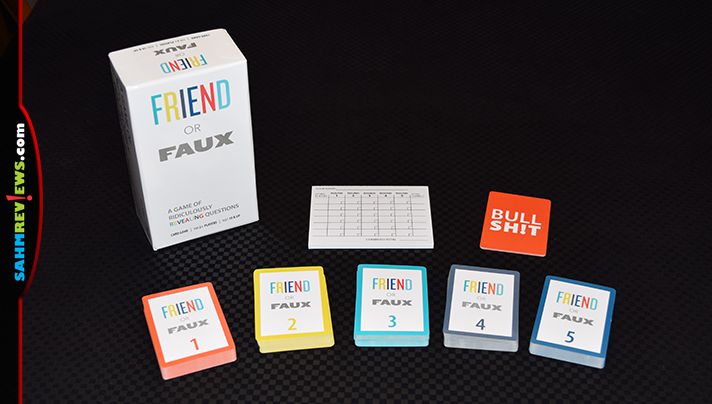 Supporting two or more players, each person receives a scoresheet and a Bullshit card to begin the game, while the rest of the cards are dividing into their respective round piles and shuffled. The first player will draw a card from the round 1 pile and read the question aloud, keeping their answer to themself. 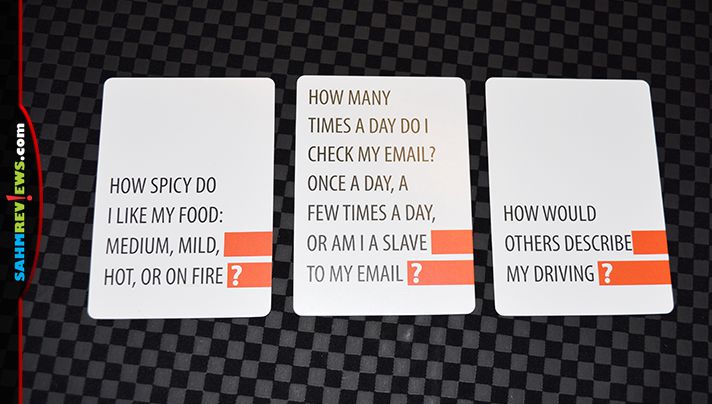 All other players then write on their scoresheet the answer they believe the active player will reveal. Once everyone is ready, the answer is stated and anyone who matches receives a point by checking the box on their sheet. If there is debate on the validity of the answer (or your guess), you may play the Bullshit card and state your case. But it is ultimately up to the active player to determine if your argument deserves a point or not.

Once all players have asked a question from the round 1 pile, play continues using the round 2 deck. With each new deck the questions become more risqué. Even the box suggests that if you are playing with more conservative friends, it is probably best to only play through three rounds! And so our site doesn’t get flagged by Google for too much adult content, we’ve put some examples in the photos rather than spell them out. 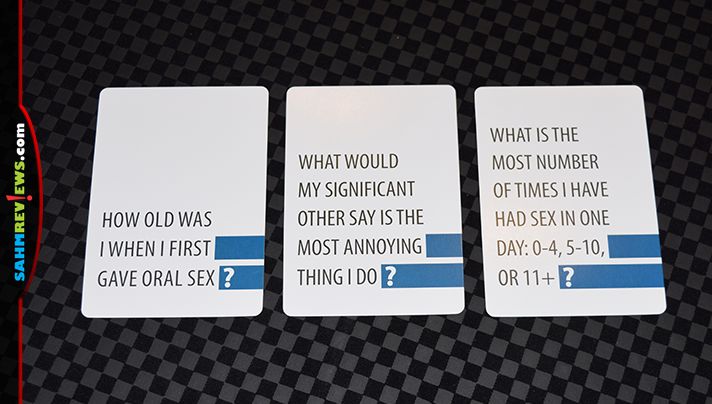 Thankfully, there is a rule that if you draw a card you are too uncomfortable answering (or it doesn’t apply to you), you can just skip it and draw a new one. Some cards have additional verbiage on them that requires you to “Prove It” by doing what the card says! For me, those would be the ones I would probably pass on. After five complete rounds (or three), the player with the highest total of correct answers wins Friend or Faux!

Find copies on Amazon for under $20 or inquire at your local game store about availability!

Have you ever played a game where you recognize the rules from a completely different game? That’s what we experienced with Shit Happens. It utilizes most of the mechanics you’ll find in the educational games of the Timeline series, but instead of putting actual historical events in chronological order, you’re asked to rank different (shitty) scenarios in order from most tolerable to worst.

Originally published by Uncle Andy Toys via a successful Kickstarter campaign in 2016, it was subsequently picked up by Goliath/Pressman and repackaged under the Games Adults Play moniker with brand new artwork. Shit Happens is probably one of those games where we could remove some of the cards to make it more family-friendly, but there’s a tamer version (Stuff Happens) on the market that we’ll be featuring in the future. So we’ve elected to play Shit Happens as intended. 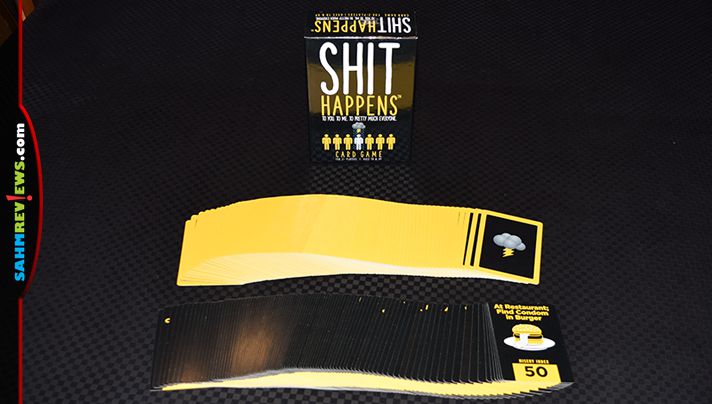 Included in the box are 200 Shitty Situation cards, each depicting a shitty event that has happened (or could happen). All 200 cards are shuffled to form a draw pile with each player receiving three to start the game. These three cards are laid face-up in front of each player and put in numerical order. 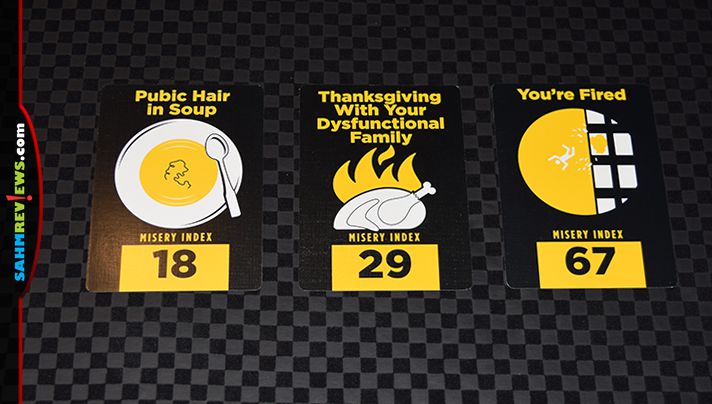 What is this number on the card? Games Adults Play claims these numbers are a ranking of how bad a particular event is. And these weren’t chosen arbitrarily. A panel of marriage counselors, therapists, career counselors and social workers with a combined experience of 150 years collectively evaluated the events and ranked them. Anxiety level, emotional trauma and long-term psychological damage was considered and the panel’s scores were averaged to create Shit Happens’ Misery Index. These are the numbers represented on the cards. 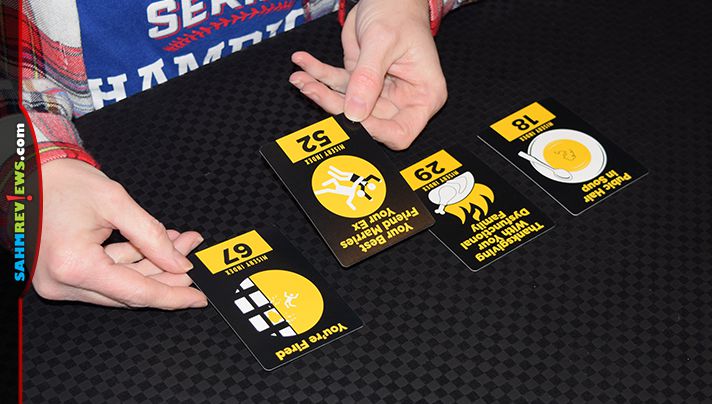 Turns are very quickly resolved, with the person to the right of the active person drawing a card and reading out the event. The active player must decide where to place the card in their person row, also called the “Lane of Pain”. Their goal is to pick a spot between two cards so that when once placed, the new card remains in numerical order. If they are incorrect, the next player in order gets a chance at collecting the card by doing the same. If no one guesses the location correctly by the time it gets around to the person who drew the card, no one gets it. 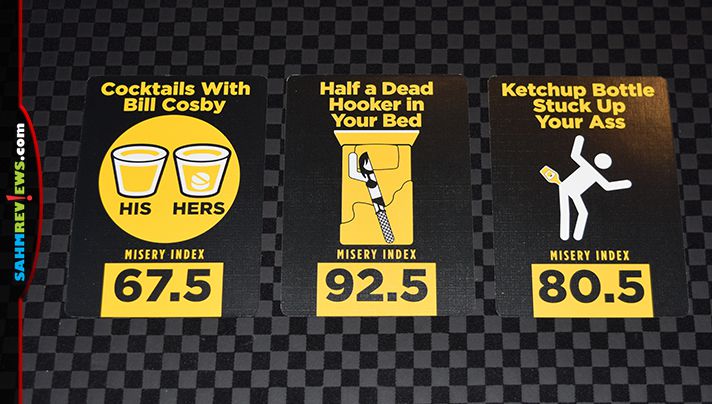 Turns continue in clockwise order with new cards being drawn and placed in Lanes of Pain until one player amasses a total of ten cards. At that point the game ends immediately and the person with ten cards is the winner of Shit Happens!

If these 200 shitty events aren’t enough for you, there are already a couple expansions offered! “Too Shitty for Work” is both a standalone title and one that can be combined with the original, while the “Little Shits” expansion can be mixed in with either (or both). You can certainly expect more expansions in the future, but we’d start with the original which is under $20 on Amazon.

“Don’t play at your office or give to your new boss as a welcome present.”

“Don’t play at family game night or break out for your kid’s next playdate.”

“Don’t play with with anyone with any moral sense at all.”

These are just the warning stickers on every copy of Tossed Salad. And we won’t even begin to go into the real meaning behind the game’s name. Google it at your own risk.

Remember gathering around the fireplace to play a game of charades with your family? That’s what Tossed Salad is – if your family is Uncle Ron Jeremy and Aunt Stormy Daniels. The entire game is a bowl of crumpled up paper with vulgar-ish words and phrases hidden inside. Your job is to get your team to guess your word. And you’ll do it in three different ways. 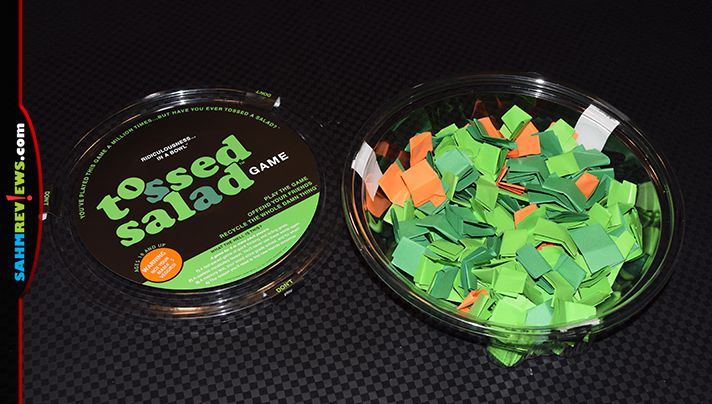 During the first round you can use any word to try to help your team figure out your phrase except any part of the word or words on the paper. You have exactly one minute to complete as many as you can, with time being kept by the other team. If you accidentally give an invalid clue, then your turn ends and the word goes back into the bowl. 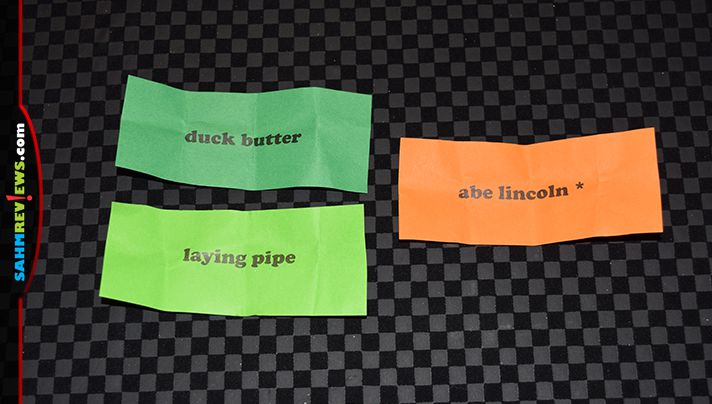 Once everyone has had a turn, round two begins. Using only the completed words and phrases (set aside any unused ones), you will again try to decipher what the active player is describing. But this time they may only use a total of three words! Pay attention during the first round for key words that might come back up again! 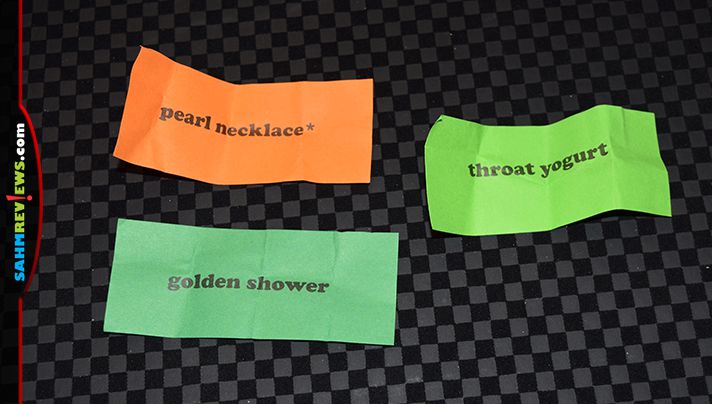 The third round once again only uses words that were successfully discovered in the second round. This time you can use NO words at all! Time to prove your charade skills as you try to convey the meaning of your R- or X-rated word to the rest of your team members. You still only have one minute, so don’t be afraid to pass and grab a different one if you don’t want to act out “mangina” or “lucky Pierre” (use incognito mode when searching that last one!).

Certainly the most inappropriate of their first three titles, Tossed Salad is also under $20 on Amazon. It’s easy enough to create your own expansions by customizing it with local slang or phrases that have meaning to only your group of friends.

Games Adults Play will be focusing on party games that will appeal to the 18+ crowd. However, that doesn’t mean they all will be sexually charged or embarrassing. In the future we’ll talk about ones that substitute as a friendly drinking game or titles that have more complex rules and mechanics. Check out their website to get a preview of some of their other currently available titles and stalk their Facebook or Twitter feed to find out what’s coming out next!