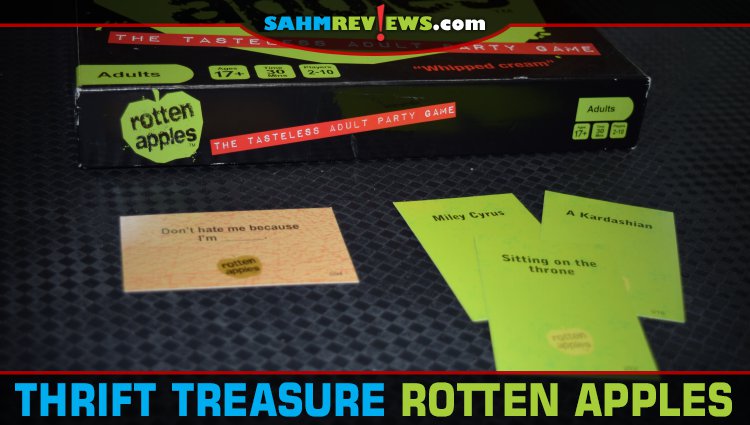 When shopping at thrift, we run into all types of adult party games which have been donated. Most are Cards Against Humanity knockoffs. We always pass on them because that’s not the type of game we enjoy as a family. We’re not prudes – we simply prefer to put more thought and strategy into our game nights.

This week we did make an exception and laid down $1.88 for a copy of Rotten Apples. Apples to Apples was one of the first games we played as a family and its mechanics have been re-done dozens of times. It’s the king of “impress the judge” games, so we hoped this one would turn things up a notch now that our daughters both meet the 17+ age rating.

And it might have. Except for the fact that the content really isn’t that adult. I mean, double entendres are all over the clue cards, but they fly over the heads of many. The game plays almost exactly like Apples to Apples, even though it was published by a completely different company. You can tell they didn’t push the creative envelope and even chose to copy the name of the original by including the word “apple” in the title.

The goal is to be the first player to collect three of the question cards. The active player will draw one and read the unfinished phrase aloud. All other players, working from a hand of five cards, will choose the response they think best fits (or is the funniest). After everyone has submitted their cards, the active player (the judge) will pick their favorite and award the question card to the submitter.

Everyone refills their hand up to five. The round winner then becomes the next question-reader, and the game continues in the same manner until one person amasses three cards. Unfortunately, that’s all there is to the entire game of Rotten Apples!

Many of the cards will not age well as they refer to current-ish memes or personalities that will soon be forgotten. If you must have a copy, you can still find it new on Amazon. It’s pretty highly rated there but sports an exceptionally low rating on BoardGameGeek – which it should!