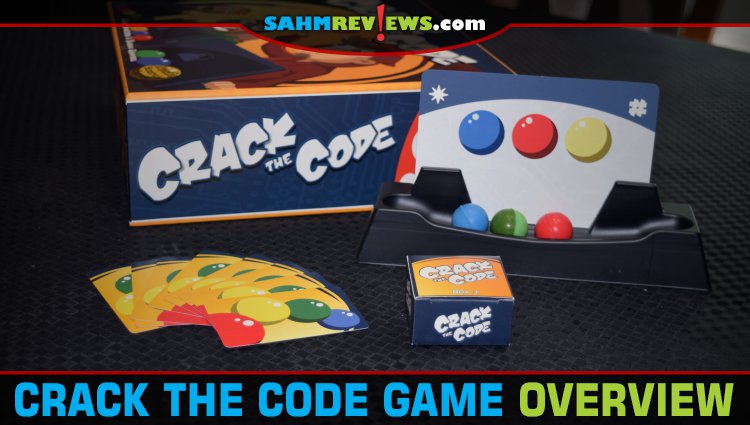 As much as I love cooperative and deduction games, you would think there would be more in our collection. Whether it’s something visual like MicroMacro: Crime City, an escape/mystery game like Chronicles of Crime or a trick-taking game like The Crew, I am happy to get it to the game table. Unfortunately, I feel like of the thousands of games released each year, only a handful really fall into this overlapping category. Our latest acquisition is Crack the Code from Indie Boards & Cards which I can best describe as a cross between Mastermind, Dr. Eureka and Hanabi.

Like most deduction games, Crack the Code sounds a lot easier than it actually is. The idea is that your network has been hacked and it’s up to you and your team to get the system restored before they get past your firewall. You’ll take turns utilizing programming actions to move marbles between various terminal trays in order to get them to match specific goal card. The game is designed for two to four players, but during setup you will place all four terminal trays regardless of player count. There are multiple scenarios to offer variety and difficulty, but each is generally set up the same way. After selecting your mission, slide the goal cards into the trays, add the designated data marbles to the bag and place memory tokens in a general supply for all to reach. Randomly draw marbles from the bag and place in each terminal tray, making sure that players don’t see the colors being placed on their own trays. Shuffle the command cards designated on the mission sheet and place them face down in the center of the table. You’re ready to fight back against the intruders!

Basically, you’re trying to use the command cards to get the mixed up marbles realigned with the goal cards. At the beginning of the round, reveal command cards equivalent to the player count plus one. Players will select one of the cards to execute. Once all players have selected a card, the team communicates to determine what order in which to resolve them. While it’s okay to discuss the plans generically and which trays will be impacted, you cannot specifically reference colors or positions.

There are four basic commands to start the game. Send, Receive, Route and Wild. Sending allows you to select a marble from your tray and place it on either end of another player’s terminal. When you select the receive action, you may pick a marble from anywhere in another player’s terminal and place it on either end of your own. Routing is the same as sending/receiving except the action takes place between any other two terminals, excluding your own. Wild allows you to take any of the other actions available during the scenario. If you don’t feel the action on the card you selected will be beneficial to the team on a given round, you may opt to forgo your turn and discard your command card instead of executing it.

As I mentioned before, you aren’t able to look at or get direct clues about what you have in your own terminal. However, the game does come with tracking markers. Each scenario provides public information about what marbles are available. Since you are able to see what the other players have, you can deduce which colors you begin with. As players move marbles out and receive others in, they should utilize the memory tokens to help track what the color and placement of what is in their terminal.

After all players have taken their turn for the round, the row of command cards is refilled and the process continues. The game is over when one player indicates they believe all trays are contain the correct colors and sequence of marbles and at least one other agrees. If the last command card is executed and the trays aren’t correct, you fail.

One thing that keeps Crack the Code interesting is that it is scenario based. So in addition to being able to play with anywhere from one to four players (which each offer a different experience), the scenarios continue to change and become more difficult. In addition, there are sealed packets in the box that aren’t opened until you reach a specific scenario. This offers additional replay value to Crack the Code.

Crack the Code is labeled for ages 14+, but it’s definitely something younger players can enjoy. Quick enough for a family game night, but thinky enough to feel like more than just filler. If you enjoy games of deduction, grab a copy direct from Indie Boards & Cards or Target. You’ll also be able to find it on Amazon soon, but it isn’t currently there as of this publication date. As always, we encourage you to support local by checking with game stores in your community. We’ll continue to decipher what Indie Boards & Cards is coding into their catalog by watching what they have to say on Facebook and Twitter. We encourage you to do the same if you enjoy these types of family games!