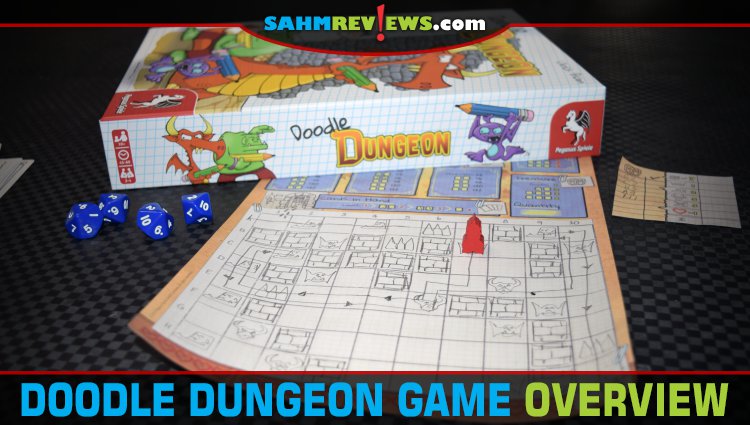 I remember getting my first Dungeons & Dragons set when I was around 7 or 8. As much as I would like to say that I dove in and embraced my inner geek at the time, I can’t. I hadn’t played before and trying to learn the ins and outs of setting up the game was just too much for me to do alone. We’ve always encouraged the girls to try new games and even sought out versions that help introduce kids to hobby games. Our efforts paid off as we have watched them learn and dominate at very difficult games. Before heading off to college, Madison spent many days and nights together with local friends playing D&D. When I read about Doodle Dungeon from Pegasus Spiele (not to be confused with Deadly Doodles from Steve Jackson Games), I couldn’t help but recall the struggles of my pre-teen self. This version of creating your own dungeon might have been a great stepping stone had it been around for me back then.

To set up the game, shuffle the deck of cards to form a draw deck then place it in the center of the table along with the dice, dungeon templates, eraser and player aid. Remove cards based on the player count and return those to the box. Give each player a dungeon sheet, score sheet, pencil and hero figure. The pencil sharpener doubles as, well, a pencil sharpener (duh) and the starting player marker. Once everyone names their dungeon on their dungeon sheet, the game is ready to go!

The idea of Doodle Dungeon is that you’ve finally realized your dream of owning your own dungeon after purchasing one sight unseen based on an ad you read. Anything is better than paying rent to your current landlord, right? As it turns out, when you arrive at your newly purchased property, you discover it’s just an empty cave. You’re tasked with adding walls, traps and monsters to your dungeon to protect your treasures from incoming marauders. The game takes place over three phases where players build dungeons, draw the hero’s path then defend their dungeon.

In the first phase (14 rounds of card drafting), each player will follow build rules to create their own dungeon. At the beginning of each round, cards equal to the number of players plus one are drawn then placed face-up for all players to see. Beginning with the starting player and moving clockwise, each player selects one of the cards. The final card is added to a discard pile to be used later. Each card displays a number of dungeon elements including walls, traps, monsters, treasurers and improvements.

All the items listed on the card you drew must be added to your dungeon from left to right based on the build rules. As an example, you must ensure there is at least one definitive path that the hero will be able to take from the entrance to the exit. Traps and monsters cannot be in spaces right next to each other while treasures only have value if there is a monster protecting them. Any unprotected treasures will disappear before the scores are calculated at the end of the game. When adding treasures to your map, you’ll actually secretly write them on your score sheet so other players don’t know their location. Improvements allow your monsters and traps to cause more damage, your treasures to be worth more and your hand limit to be greater. If you don’t feel like freehand drawing the dungeon items, grab one of the stencils!

Once all cards have been drawn and dungeons created, everyone passes their dungeon sheet to the player on their left. That player is responsible for selecting the path the hero will take. The route must always move orthogonally from one square to the next, may cross over itself but only through any given space a maximum of two times. You’re allowed to turn any direction, including turning around, but you cannot attack the same monster twice without encountering another obstacle between those two battles. Once all players have created the path, the dungeons are returned to their original owner.

The final phase is where players defend their own dungeon! Each player will take turns moving the hero figure, carrying out an encounter, utilizing dungeon actions, playing hero actions then refilling their hands. Cards are played to either help defend your own location or aid a hero in an opponent’s dungeon.

When the hero lands on a trap, it does damage based on the upgraded value listed on the top of the dungeon sheet. To determine the strength of the monster, two dice are rolled and that value is added to the improvement damage. If the total is 20 or higher, the monster succeeds and the hero takes damage. Anything below that and the monster is wounded and retreats from the dungeon. (This approach keeps the game family-friendly!)

When all heroes have either died or escaped the dungeon, totals are calculated. Points are earned for remaining monsters, undiscovered treasures and the status of the hero. The player who had the most points can claim to be the best dungeon master! Doodle Dungeon is a different take on the traditional dungeon crawler game while remaining family-friendly. It won’t take a hero to unearth the location of copies of this treasure. Local game stores, direct from Pegasus Spiele and Amazon are a few places to find Doodle Dungeon and their award-winning game, MicroMacro: Crime City. Gather your friends for a raid on social to see what else Pegasus Spiele is up to. You can find them on Twitter and Facebook.

Have you even been a dungeon master?