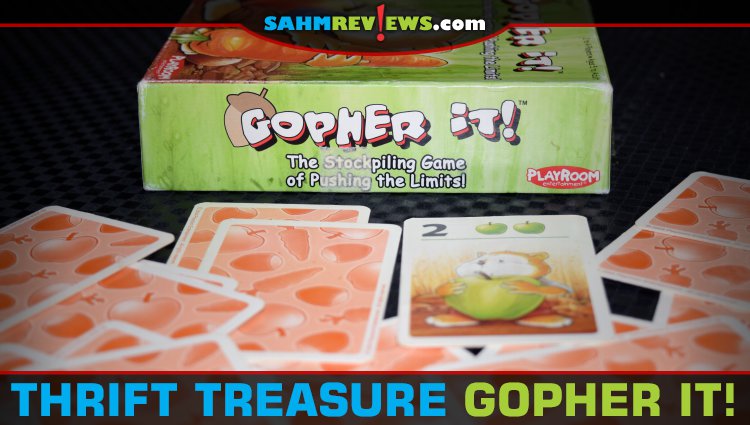 One theme which is prevalent in today’s modern games is food. Whether it’s collecting wheat and corn in the latest euro or serving up fast food in card games like Fast Food Fear, it’s a topic that is approachable by all ages of players. Another popular theme for games is animals. You’ll find a game named for almost every type. It doesn’t matter if they’re animals who are chemists or hens hunting for gems – there’s been a game featuring your favorite.

Our weekly trip to Goodwill resulted in only one purchase this time. Gopher It! by Playroom Entertainment set us back only eighty-eight cents, and although already open and played, was complete. It’s a quick little game for up to four players age 5+ and not only contains well-made cards, it also features one of our favorite game mechanics – press-your-luck.

Inside the box are fifty cards made up of thirty-nine food and eleven trophies. The food cards depict either apples, carrots or nuts and range in value from one through three. Set up the game by shuffling the food cards and spreading them out in a pile in the center of the play area. The eleven trophy cards are kept in a stack close by.

The object of Gopher It! is to collect food for your wintertime stock. Every time you manage to collect exactly six of a food type, you will earn a trophy. The first player to collect three trophies will be crowned the winner. Starting with the youngest player, they will select any card from the food pile and turn it over, leaving it in the center with the rest of the pile.

At this point the active player has a decision to make. Either stop their turn and collect the card into their stockpile or push their luck by turning over another card. You may continue revealing cards as long as you don’t draw two in a row of the same food type. If you do, all revealed cards are discarded, and you receive nothing for the turn. Additionally, you may only reveal up to four cards, at which point you will collect all of them to your stockpile if you haven’t revealed two matching in a row.

Before play passes to the next player, if the active person has exactly six of one type of food, they discard all their cards, including the foods that didn’t total up to six, and take one trophy card. They will begin the next round with a completely empty stockpile.

If one or more of the food types has more than six, you have exceeded the capacity of your stockpile and must discard all the overflowing food types (so you have none left). You are still able to keep foods which you have less than six of. You may also only receive one trophy per turn, so if you manage to collect six of two distinct types of foods, all the cards will still be discarded, and you will only receive one trophy.

If the food pile in Gopher It! runs out, shuffle the discard pile and create a new one. The first person to collect their third trophy immediately wins the game! Expect an entire game to only last about fifteen minutes. Plenty of time to shuffle and play again!

Originally published in 1999, Gopher It! is not currently in print. You can find new and used copies on eBay for around $10. Of course, you can always wait to find a used copy at thrift or a yard sale. Just make sure all the cards are present and in good condition before you buy!

Do you have a favorite food-themed game?