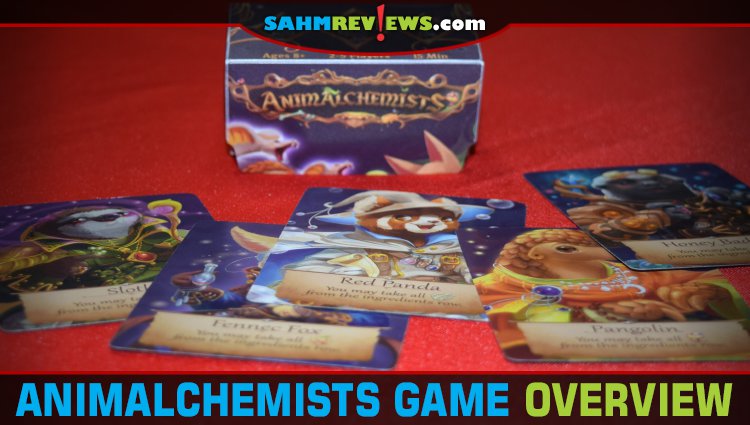 It’s been nearly four years since we first introduced you to CardLords and their very first game, BattleGoats. If you don’t recall, it is an inexpensive card game featuring battling goats (duh) and utilizing recognizable game mechanics from classic examples such as War and Concentration. We particularly enjoyed the bright and kid-friendly artwork and the fact it supported up to six players!

Having moved on from goats, one of their newest games includes animals of many distinct species. Animalchemists supports up to five players who will each play the role of an animal alchemist trying to make potions to craft spells. Each person is randomly dealt (or they may choose) one character card. Each mammal has a unique ability and vary in type. Included are a fox, badger, sloth, panda and pangolin!

There are also three small decks of cards which are sorted independently. The shuffled ingredient deck is set to the center of the play area with five cards dealt out face-up to its right. Potion cards are sorted by color and set in stacks directly underneath the ingredients, while spell cards are also shuffled and dealt in the same manner as the ingredients, but underneath the potions. A special Time Stop card is placed on the bottom of the spell card deck.

The premise of Animalchemists can be summed up this way. You’re acquiring ingredients to make potions. Then, you’re using those potions (and sometimes additional ingredients) to craft spells. Finally, you may use the effects of the spells to get a head start on your next concoction!

Players do not start with any cards in their hands. On a turn you will take one of three actions. First, you might choose to take two ingredient cards from the face-up row or the top of the draw deck. These are kept in your hand without revealing to other players and there is no hand-size limit.

Your second option is to spend ingredient cards in your hand to make a potion. All five potion card types display the ingredients needed to craft it. Each player may only have one of each type of potion card in front of them and remain face-up in front of the player. If the market pile runs out, that potion may no longer be crafted.

Lastly, you can use a combination of potions and/or ingredients to craft spells. These are worth points at the end of the game and may be used one time to activate the spell card’s special ability. Discard the potion and ingredient cards used and collect the corresponding spell card. You can cast spells at any time on your turn and they do not count as your action. Same goes for your character card – use it once and flip it over, taking all your specific ingredients from the tableau.

A game of Animalchemists ends when the Time Stop card is revealed from the bottom of the spell deck and is crafted. At that point, the game ends immediately and all players add up the points from their spell cards, used or not. Unused potions are worth three points and ingredients are valued at one. After totaling all three categories, the player with the most overall points wins Animalchemists!

Originally a successful Kickstarter campaign, you can purchase a copy of Animalchemists directly from the publisher on their website. If you’re curious about what other animal-themed games CardLords might be working on, follow them on Facebook or Twitter to be one of the first to know!

What is your favorite animal-themed game?