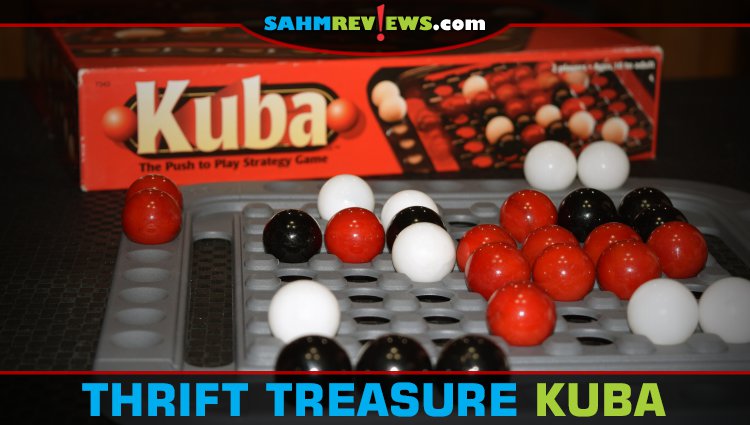 I almost set a record this week when purchasing this copy of Kuba at a Half Price Books in Cedar Rapids. Previously, the most I had spent on a game at thrift was $6.99 for a like-new copy of Dominion. I usually refuse to pay more than $5 for a used game and prefer to keep it in the $1-$3 range. I’ve shopped at other Half Price Books stores in the past and always find something I’d like to buy, but even at 50% of the MSRP, many of the titles are still overpriced.

At this particular store I found a few I really wanted, but again put them back on the shelf when I saw the $25-$30 asking prices. However, one did stick out to me since I absolutely love beautiful abstract games. This copy of Kuba by Patch Products features oversized opaque glass marbles along with a custom plastic board. It was priced at $7.99. I decided it was worth it since the few copies available on eBay were over $30! It also gave me ideas for different components for my game creation, Gekitai.

Kuba is a two-player game where the object is to be the first player to push seven red marbles off the board. The board is set up with red, black and white marbles in specific positions as shown in the rules. One person plays with the black marbles, the other with white. The person playing white begins the game.

On a turn a player will push a single marble of their own color either vertically or horizontally (diagonal movement is not allowed). A marble may only be pushed if it doesn’t have another marble directly behind it. If there are other marbles, either your own, your opponent’s or neutral red ones lying directly in front of the one you are pushing, they are all pushed one space forward.

Once pushed, the opponent may not push that row/column back on their next turn. They must wait until the following turn to push that group. This prevents players from just pushing back and forth on the same marbles and creating a stalemate.

Any marbles pushed off the sides of the board are collected by the active player. Red marbles are placed in the holders in front of you while opponent’s marbles are collected to the side. You may never push your own marble off the board. When you collect a pushed marble, you are immediately awarded another turn. You may push that same marble again or a completely different one. The first person to collect seven of the red marbles or push their opponent into a position where they cannot make a legal move wins the game of Kuba! The losing player gets to play as white in the next game and take the first turn!

As I previously stated, used copies of Kuba can be found on eBay for reasonable prices. If you find a complete copy at thrift for under $10, I would not hesitate to pick it up. Just make sure all the marbles are present and in decent shape as I haven’t been able to find many replacement options without changing the full set altogether.

What’s the most you’ve paid for a game at thrift?