By now you know that we like to start with an introduction when we write about anything. Sometimes we are reminiscing about some memory jarred by a game. Other times we talk about similar products. This time, I’m going to reserve those comments for the end – with good reason. It will make more sense when we get to that point. Right now, however, I want to jump right in and tell you about Gekitai. Why? Because I’m really excited about it! 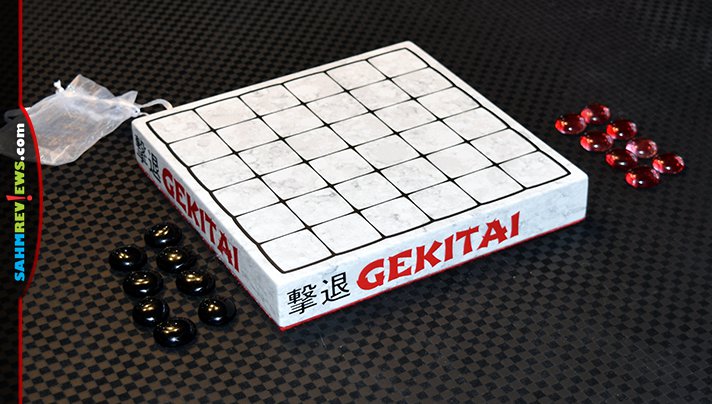 Gekitai is a 2-person abstract strategy game. Setup is pretty simple… find an opponent and set the board between you. Each player takes one of the sets of eight markers, a starting player is selected and you’re ready to go! The object of the game is to have three of your own pieces in a row or have all eight of your markers on the board at the end of your turn. Before you start comparing it to tic-tac-toe, checkers or some other game on a grid, keep reading. It is NOT as easy as you think. It’s elegant in design and chaotic in action. Gekitai will have you shaking your head when you inevitably give your opponent the win. Yes, it will happen. Thankfully, you can start and finish a thought-provoking session in about five minutes. 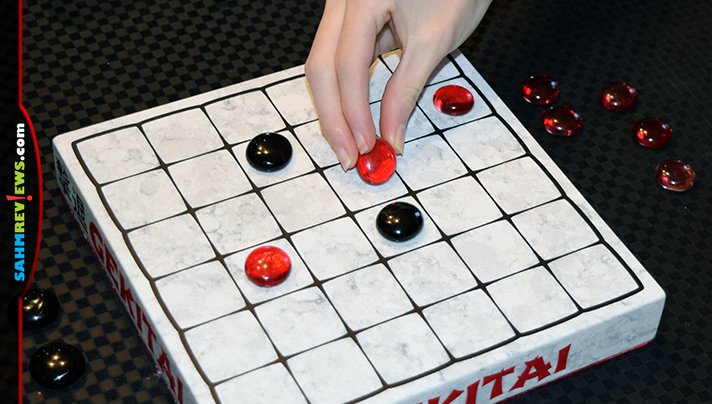 To begin the game, the starting player places one of their markers on any space on the board. The second player does the same. But here’s the catch. When you place a marker on the board, it repels everything in the spaces immediately surrounding it. That’s actually the origin of the game’s name. Gekitai is the Japanese translation of repel or push away. 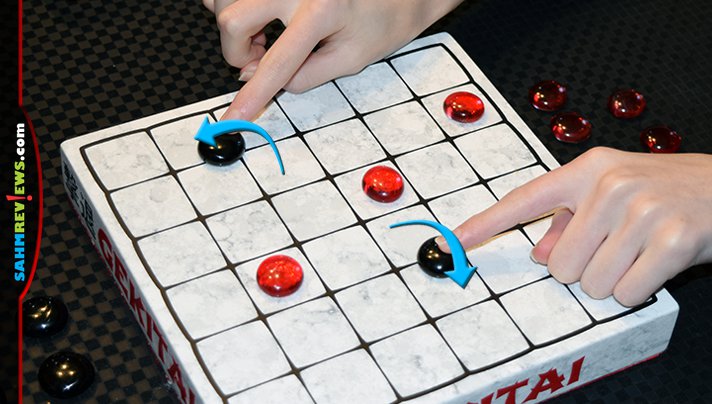 As I said, everything around a recently placed marker is impacted. Whether it’s yours or your opponent’s piece, it will move one space away in the opposite direction of the piece that was just added to the board. If the piece you’re nudging is on the edge of the board, it falls off and is returned to the owner. Pieces aren’t captured in Gekitai. 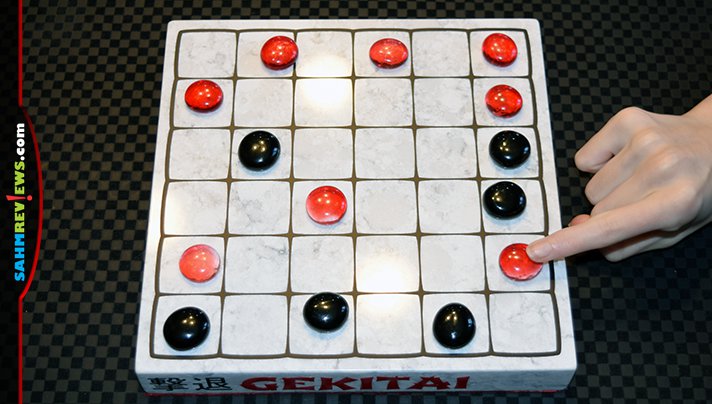 So at this point, you may be asking yourself how you can possibly win if you’re always pushing pieces away from each other. There are three answers to that question. First, as I mentioned before, one of the ways to win is to have all eight of your markers on the board at the end of your turn. As you’re in the midst of trying to play your moves and avoid letting your opponent win, you may find yourself forgetting to count how many pieces your opponent has on the board. Every time that I’ve lost this way it’s because I was too focused on playing to notice! 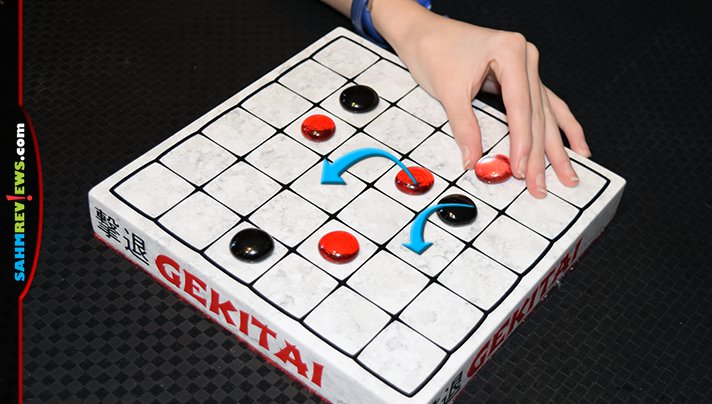 But that doesn’t really answer how you can get three in a row, does it? The marker being placed doesn’t have to be one of the three. So if you’re able to push another marker into position, that can cause a win. I call this the triangle effect because when there are three pieces in a triangle on the board, you need to watch for this! 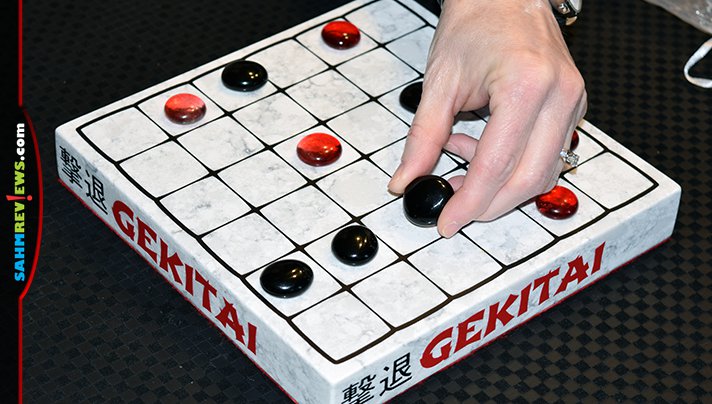 The third answer is that there is an exception that will prevent a piece from being pushed. If there are two markers lined up next to each other and a third is placed alongside it, there isn’t room for the adjoining piece to move. While all other pieces will move as normal, blocked pieces, even if they are opposing colors, don’t budge. 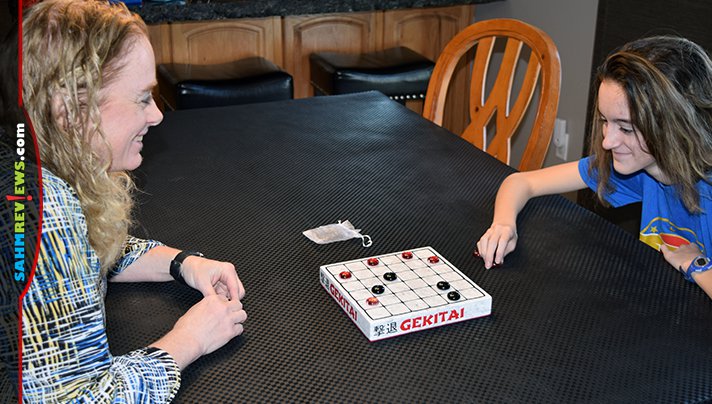 After you have repelled all the necessary pieces, check if the win condition of three like pieces in a row has been met or eight of one person’s pieces are on the board. If so, the person with the three aligned pieces is declared the winner. That may be you… or you may have inadvertently pushed an opponent’s piece in for the win!

We’ve played Gekitai more times that I can count, often with the winner undoing the last move to jump start the game from where it left off before the error that caused the win. Gekitai is a 2-person game, but often draws an audience of “Ooh. I see a move!” onlookers. Hobby gamers have played and enjoyed it. We’ve introduced it to non-gamers who have said, “I would buy this and leave it on my table.” Recently, an elementary-aged neighbor gave it a shot and did quite well. Like any abstract strategy game, it’s not age-restrictive. Someone young is capable of playing if the rules are explained. It’s about learning how to play and giving it a shot. Here’s the point where I usually tell you how much it costs or where to buy it, but this is even better. Gekitai is available as a print and play. You can use your own markers (nickels and pennies work great), download a copy of the board and the Gekitai instructions FOR FREE and give the game a try for yourself!

At the beginning of the article, I said I would explain why I’m so incredibly excited about the game. Aside from the fact that Gekitai is a lot of fun, free to download and only takes about five minutes, I’m married to the designer. Scott has been working hard to perfect Gekitai for several months and we’re thrilled with the final result. As you can see from the pictures, we have physical copies and may be selling those on Etsy. If you’re interested in purchasing a hand-made copy of Gekitai, shoot us an email or leave a comment and we’ll be happy to give you a quote for one. Stay tuned for details coming out of New York Toy Fair about another game that Scott designed!

How often to you print your own versions of games?