There are some game genres we seem to have a lot of in our collection. Because abstract games rank high on our list, we own quite a few in addition to creating our own (Gekitai). We’ve never met a game by Stefan Feld that we didn’t like and proudly display La Isla, Luna and Bora Bora on the shelves in our living room. There is, however, one game type that we don’t have many examples of – racing games.

Sure, you’ll find us enjoying Downforce or Wacky Races from time to time, but there’s never been just one racing game that became our all-time favorite. We recently learned of a new issue by Mr. B Games called Vintage Racers. Having grown up with a father that loved antique cars and I have enjoyed racing autocross a time or three, it sounded like a game we needed to try right away.

Vintage Racers is the result of a successful Kickstarter campaign from a couple years ago. Designed for up to four racers (eight, if you combine two copies of the game) and playing in around 30 minutes, instead of featuring a large fold-out board like so many other racing games, this one’s track is made up entirely of cards. And not just the track, but the representation of your racing car too! 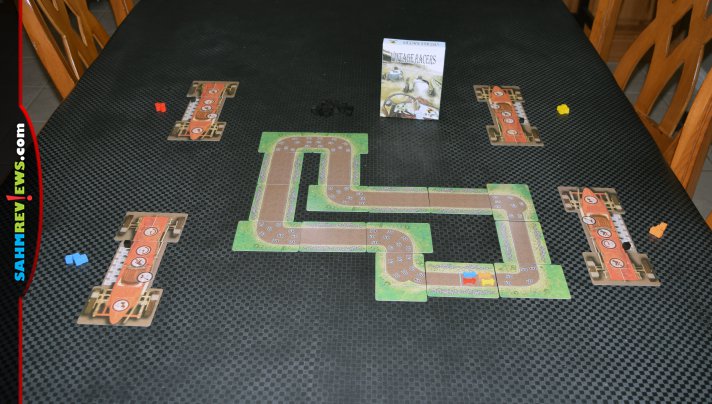 The first thing you’ll need to do is set up the track. Take the sixteen track cards and put them in numerical order with the number oriented in the same position on each one. Arrange them in the center of the play area to form your track. Each space on the track will be a place cars can move to. Some spaces have speed limits on them which must be observed or damage will occur to the car.

Each person’s car is represented by three cards. One for the front, one for the middle and a final one for the rear. How your car is assembled is determined by a draft from available segments. Some cards allow the car to go faster, how quick it accelerates, how much tire damage can be sustained or how abruptly the vehicle can slow down. Once everyone has drafted their car parts, a game of Vintage Racers can begin.

Players begin the game with their car at the speed denoted on the tail section of their car and mark it with their driver token on the speed track. You will move your car a number of spaces equal to the car’s speed divided by 10. On future turns, players will secretly determine their speeds and reveal them at the same time. Your speed may be increased by no more than the accelerator value of your car and may never exceed the car’s top speed value.

The player with the highest revealed speed goes first. If tied, the person whose car is furthest down the track (of the tied players) begins. Movement is obvious, always forward or diagonal. You may not enter a space occupied by another car. When you enter a corner, you may not be moving a speed higher than the speed limit. If you are, you must take tire damage for every 10mph you exceed the limit. Place a cube on one of the tire damage spots on your cards. You could also elect to spend driver cubes to “push it to the limit” and save your tire wear. 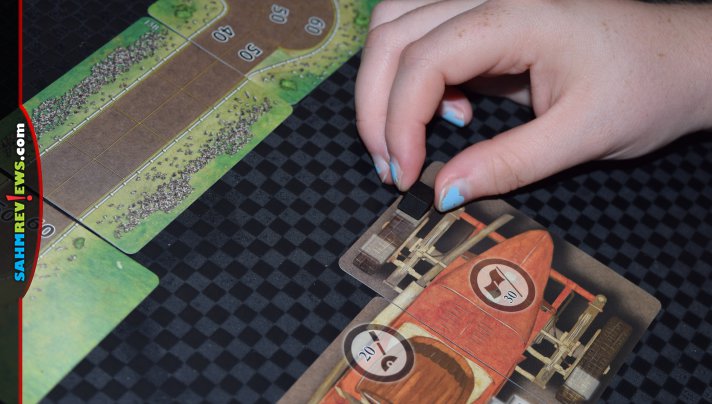 Rounds are played in the same manner by revealing new speeds, moving cars and taking damage until one or more players cross the finish line. If more than one player crosses during the same round, the player whose car is the farthest past the line is the winner of Vintage Racers. Did the game seem too short? The box lists the length at 15 minutes, but they’ve included three extra track cards which allow you to extend the track a little bit longer. 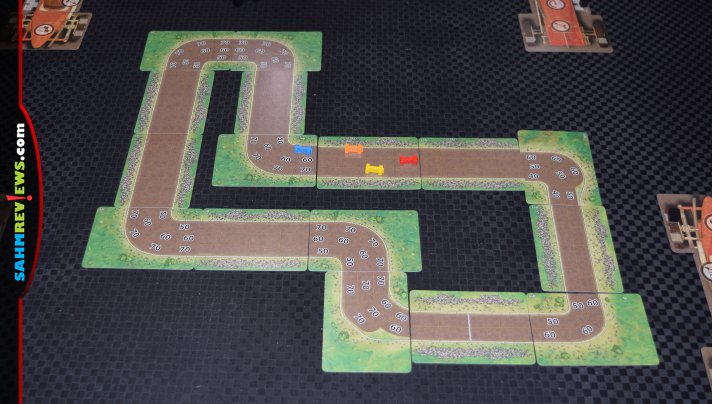 Even though the price of Vintage Racers is much less than other current racing games, there were too many flaws for us to give it our full recommendation. There are two versions of the game, a single-deck box and a double-deck one (which I assume allows for more players), yet the instructions only refer to a single one. There is no component list anywhere on the box or in the rules to determine if what you receive is complete or not. Even the double-deck box lists the player count as 2-4, when it obviously is meant to play up to eight. 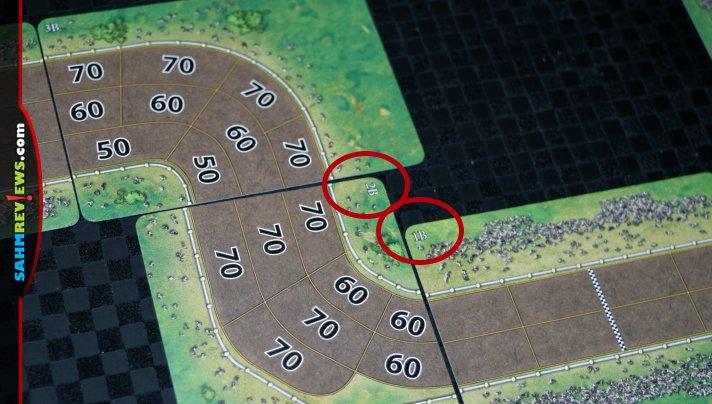 And the rules…so many typos and misspellings. There’s no mention of what the penalty is if your car is completely damaged yet you try to go too fast through the corners. Remember, these speeds are revealed at the beginning of the turn and you may have not noticed your trajectory when you placed your “bid”. How about what to do when your car is blocked and you cannot move? There’s not even a notation on how far to move on your turn (one space per 10mph, as I mentioned earlier)! And I won’t even go into the misprinted track cards that make it super difficult to build the course. If you’d still like to try out Vintage Racers, you can find copies on Mr. B’s website or pick one up off of eBay.

What is your favorite racing board game?