Being a fan of all things Nintendo, if you ask Madison what the best racing game out there is, she will quickly proclaim, “Mario Kart”. Admittedly, it is an amazing take on a classic lap race with power ups and items you can throw at other racers. I’ve always wondered where the inspiration came from.

No, I haven’t. I know exactly where the idea of a free-for-all motor race came from!

In the late 1960’s, a new cartoon hit the airwaves on CBS. Wacky Races aired for only one season in the latter part of 1968. It was popular in syndication in the late 70’s and when I was old enough to choose what to watch on Saturday mornings. I must have seen all 17 episodes at least a dozen times and secretly wished they would start making more episodes.

At last years’ Gen Con convention a familiar character on a game box caught my eye. There he was, Dirk Dastardly, leading a race against other characters from the vintage cartoon. It was a brand new board game by one of our favorite game publishers, CMON. There was no doubt that it would come home with us. 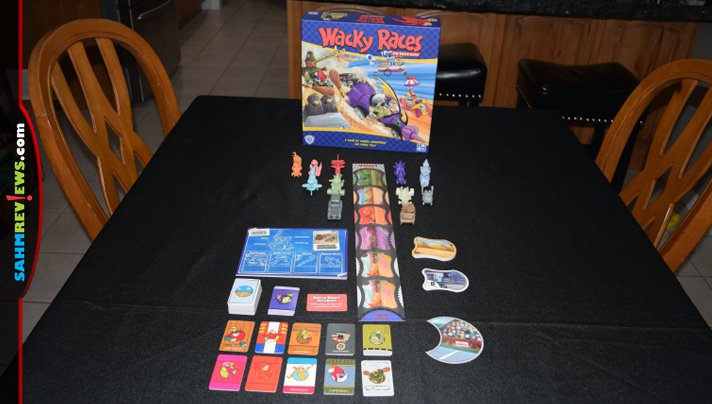 Wacky Races was one of the first game boxes I opened upon returning from our trip. Amazingly, all eleven cars from the series are present in this board game version. From Arkansas Chugga-Bug to Turbo Terrific, each one has been faithfully recreated in miniature form. Even Dirk Dastardly’s (and Muttley’s!) Mean Machine races in every game! 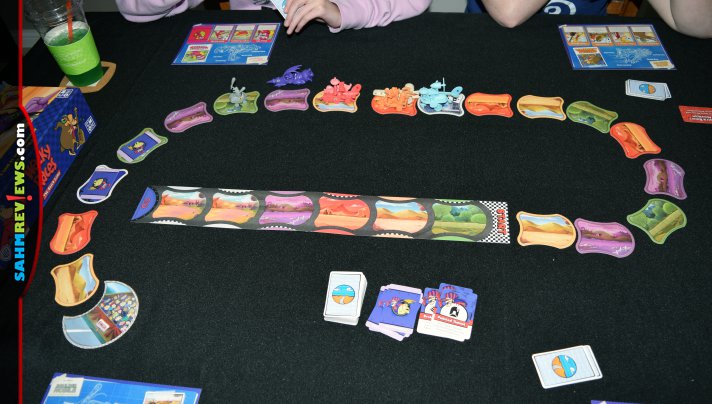 Setting up for a game of Wacky Races is pretty quick too. Each person chooses a character they want to play as and take the miniature and matching player board with four associated cards. If playing with less than the full compliment of six players, select neutral cars to fill in the spots. Lay out the race track starting line and randomly add the first eight terrain tiles followed by a gas station tile. One other special tile is randomly chosen, shuffled into the final terrain tiles and also dealt to the table. Add the finish file and you have your entire racetrack ready! 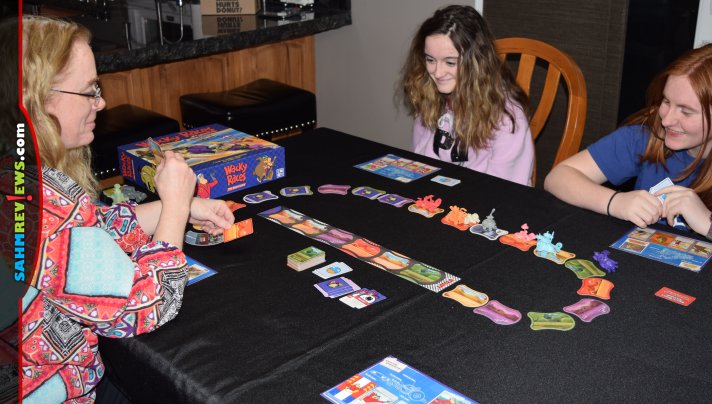 After dealing three terrain cards to each racer, the rest are set in the center of the play area as a draw deck. Dirk Dastardly’s trap cards are also shuffled and set next to the terrain deck. Dirk’s car begins the game at the back of the pack, with the starting player right in front of him. The next player in clockwise order starts their car on the next forward tile, and so on until they are all placed (neutral players begin at the front). 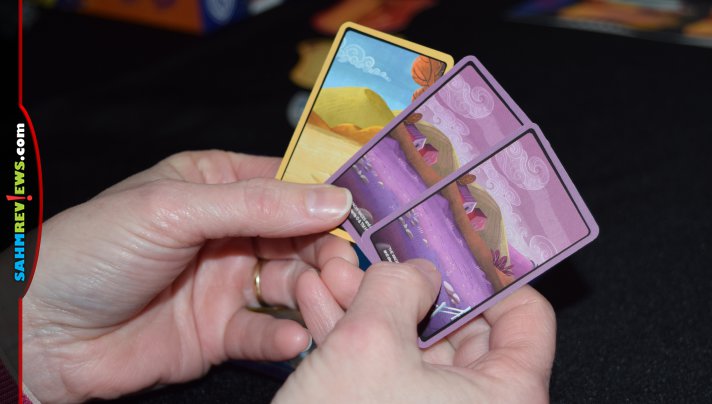 On a player’s turn, one card from their hand of terrain cards must be played and their car is moved forward one space. Each tile may hold two cars, and if full, the moving car skips over them and lands on the next tile. After playing one card, a racer may elect to play one or two more cards to move as long as the terrain matches the space they are currently on. At the end of their turn they will draw back up to a hand of three cards. 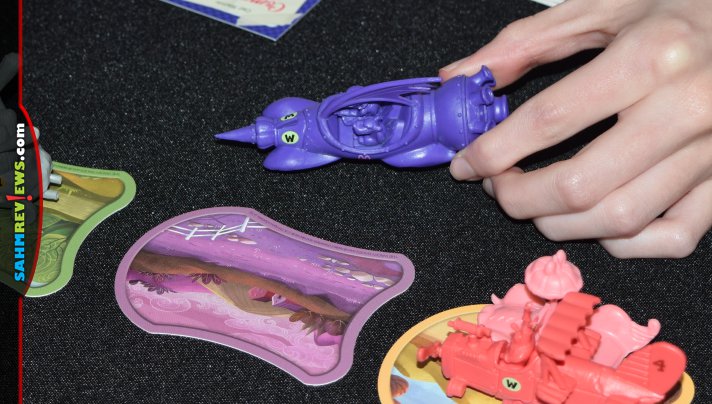 At the completion of every turn during Wacky Races, Dirk Dastardly moves his car. Looking at the top card on the discard pile (the last card played by the previous player), Dirk shoots forward to the next terrain tile of that type. If he is in first place after moving, he lays a trap on the tile and moves back to the end of the pack. The first car to cross that trap will trigger it and suffer its effects. 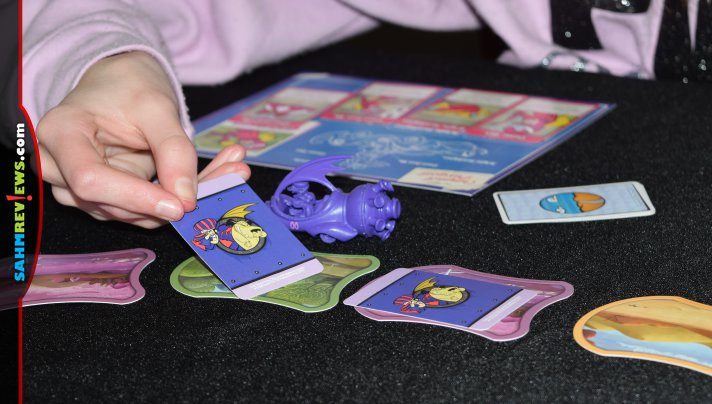 Neutral cars move after all players have taken a turn. Each moves forward one space and then a card is drawn from the terrain deck. Any neutral car on a matching space moves forward another tile. Two more cards are drawn in the same manner, moving matching neutral cars, before beginning the next round. 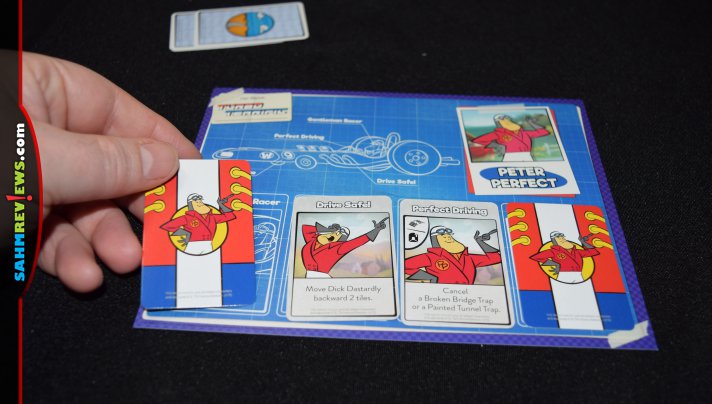 Each player has four cards on their player board which represent unique powers and abilities they can employ at any time. Some allow for additional cards to be drawn to the owner’s hand, others shoot your car forward and draft any they pass forward a space as well. Each can be used only once per game (one will be refreshed when the last place player passes the gas station), so time your moves carefully. 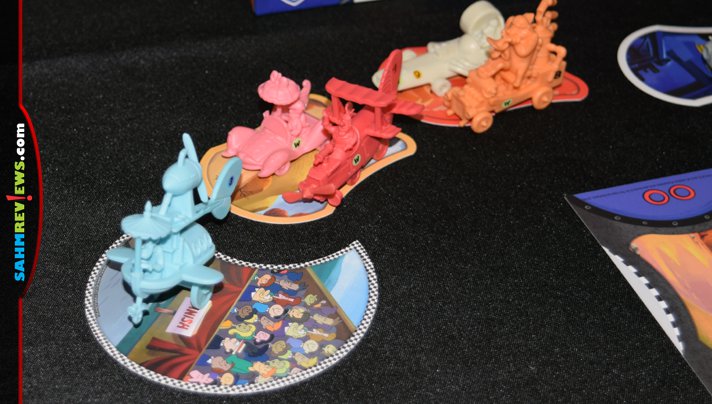 The first car to reach the special tile in the latter part of the race will activate it. These employ minor rule changes like removing the limit to how many cars can be on a tile or let someone swap positions of any two tiles in the race track. Not game changers, they just add a little bit of excitement and randomness to the end of the game when things are getting close! The first player to get their car onto the winner’s tile is the champion of Wacky Races!

If you’re a child of the 70’s, you’ll want to pick up a copy of Wacky Races on Amazon, direct from CMON or from your favorite local game store. Keep up to date on what is developing at CMON by following them on Facebook or Twitter. They’re not just all about Kickstarter games!

Which Wacky Races character was your favorite?

Tags: board games, CMON, Cool Mini or Not