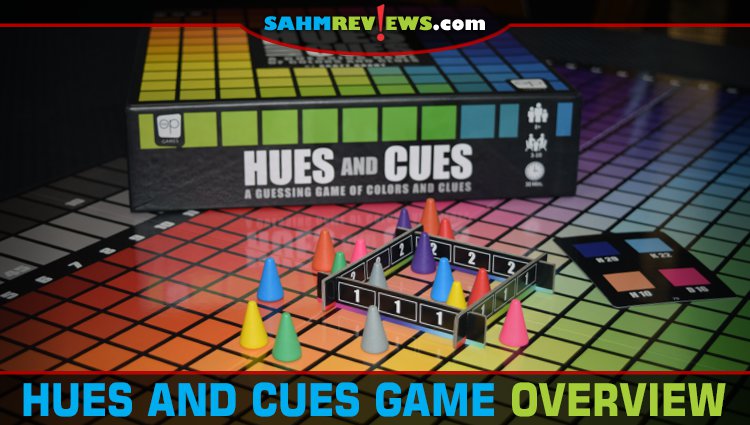 Never have I been more excited to tell you about a game than I am at this very moment. You could probably hear the pride in my digital voice when I wrote about Gekitai back in February and perhaps you recall one of my closing comments. I said to stay tuned for details on a game that was being previewed at New York Toy Fair. Not just any game, a game Scott designed last year. Well, this is that time! Last week we received our first official copy of Hues and Cues from The Op. I’m positively giddy because it’s something we’ve poured our hearts into for a year and now we finally have a tangible product in-hand. What makes it more exciting is the news that we will see it on shelves at Target later this summer. It’s positively surreal. 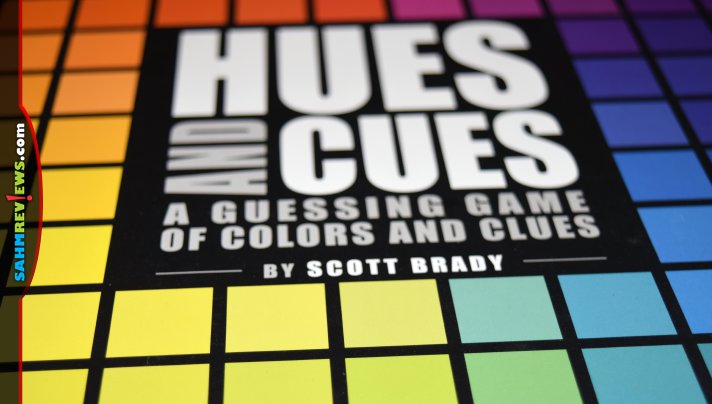 Hues and Cues is a party game about color perception. Before I go any further, I want to point out that it’s a common misconception that people with color deficiencies cannot play. They can! I’ll explain it in more detail throughout the article, so please don’t click away before learning more. Hues and Cues isn’t about matching colors, it’s about trying to guess the cue giver’s color based only on a couple of clues. Not only can up to 10 people play at once, it’s also multi-generational. By that I mean that we’ve played it with a 6 year old in the same game as senior citizens and both have been equally competitive. How often can you say that about a party game? Not very often. The reason is because it’s about how we remember colors. As an example, if the clue is “banana” then you’ll be looking at some shade of yellow which will vary based on your opinion of what a normal banana looks like. Can you understand now how someone young has an equal chance of winning? They know just as well as you do what color a banana is. The same concept holds true for color deficiencies. 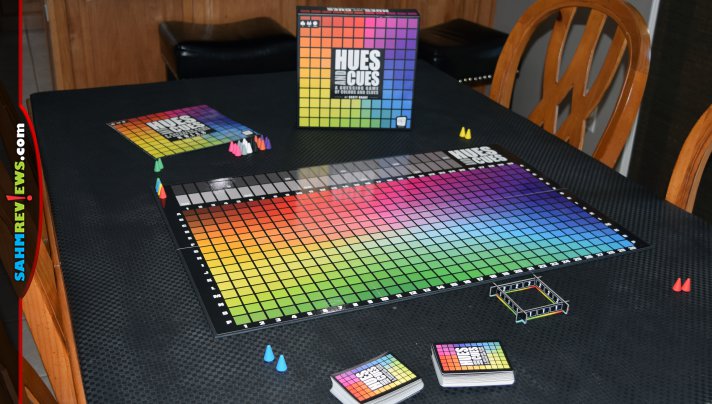 So let’s talk about setup. While it plays up to ten, don’t stress too much about having a large table. You’ll find yourself standing up and milling around part of the time as you examine the board. The key thing is to have a space that accommodates everyone comfortably, even if they aren’t butted up against the table. To set up the game, place the large, colorful board in the center of the table and have everyone select a player color. One pawn goes along side the scoring track and the player holds the other two. The deck of color cards is shuffled and placed near the board. Feel free to split the deck into smaller decks so everyone can easily reach one during their turn as cue giver. The scoring frame is handed to the first player and you’re ready to go! 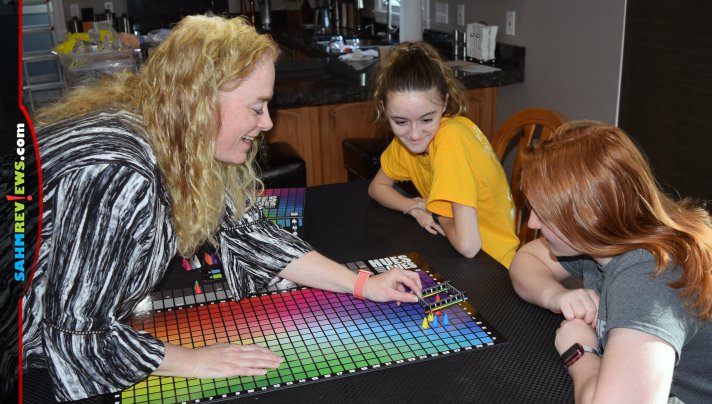 Hues and Cues takes place over multiple turns depending on how many people are playing. If there are seven or more people, everyone will get one turn each as the active player. With 4-6 players, each player will have two opportunities to give the clues. You can score points when you are accurate both as a cue giver and as a guesser so there’s balance regardless of how many rounds you play as long as everyone has an equal number of turns. 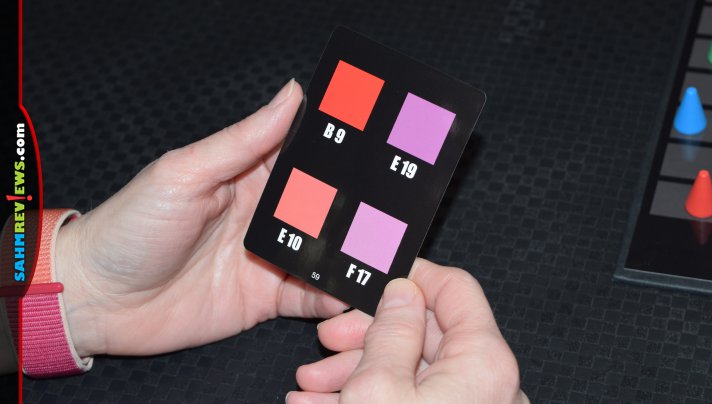 The active player draws a card and secretly examines it. Without others seeing, you’ll select one of the colors that you’ll want to direct other players to locate on the board. Pick a color that you can associate with something else because you’ll need to provide cues so others can figure it out! Begin by offering a one-word hint about the color you selected. There are only a couple simple rules to follow. 1) It cannot be a common color name like red, blue, green, etc. 2) It cannot hint as to the location on the board and 3) It may not refer to anything in the room. You could say, “Cubs” or “Pepsi” and people might automatically think of something in the blue range. “Barbie” will likely have people honing into the various shades of pink. Or at least that’s what you might hope.

After you’ve given a one-word cue, starting with the person on your left and continuing clockwise, each player will take one of their pawns and place it on the space of the board they think you’re referring to. Only one token may occupy a space so don’t be surprised when you hear, “Hey, that’s where I was going to go!”. Ask my friends how often I say it. On second thought, please don’t.

After everyone makes their first guess, the cue giver has a choice to make. Give a two-word clue or stop and begin the scoring phase. If a good enough clue was provided in the first round that allowed other players to hone in on the right area, then the cue giver can opt to stop. Otherwise, they’ll give a two-word hint and allow players to place their second pawn. This time, it starts with the player on the active player’s right and proceeds counter-clockwise. 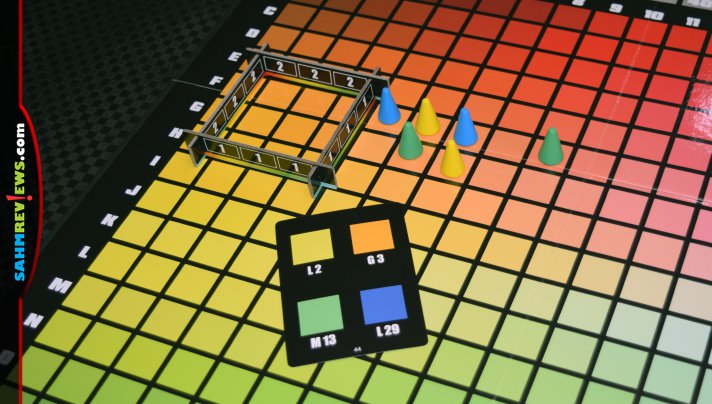 The second clue doesn’t have to relate to the first word, but must abide by the same three guidelines. That hue of blue where you previously said “Cubs” may now be, “night sky.” And before you tell me that you don’t think “night sky” and “Cubs” are in the same range then you and I aren’t thinking of the same color. That’s okay. That’s what makes the game interesting. It’s all about perception. I may be thinking of the framed picture of the “W” above my mantle. You may be thinking of something on their uniforms. This concept is what makes this game playable by people with color deficiencies. Everyone sees colors differently and everyone remembers them differently. Someone with a color deficiency sees an apple as one color and a banana as another. Both of which look different to them than the color of the grass or sky. When we were testing the game out, we talked to a board-certified ophthalmologist who confirmed our statements. We have also played it with people who are color deficient and they’ve been just as competitive as everyone else. The discrepancies come in how we remember things. I once said, “Kermit” as a clue and everyone placed their pawns in VERY different areas of the board than I was expecting. I was envisioning a 1970’s TV version of Kermit while everyone else was thinking high-def and plush dolls. It didn’t mean my clue was bad, just that we all see and recall colors differently. A lot of inside jokes along with a lot of laughter have been spawned by playing Hues and Cues. 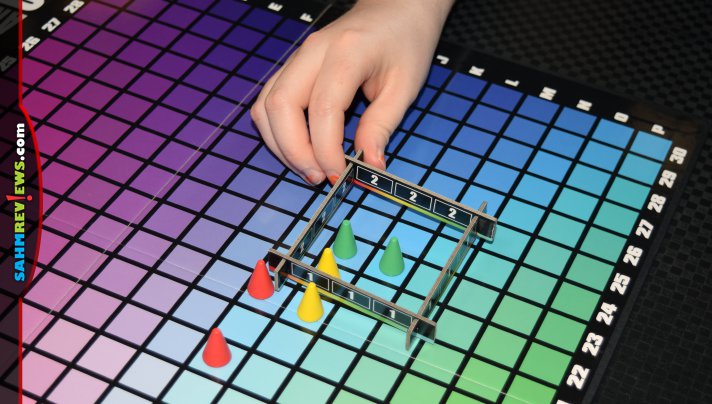 So how do you score points? By accurately giving or guessing the color, that’s how! After everyone has placed their token(s), the cue giver places the scoring frame around their chosen color on the board. Players score three points if they nailed it, two points if they’re in one of the eight spaces surrounding that and one point for the 16 spaces on the outer edge. The cue giver scores one point for each pawn inside the scoring grid. On your turn as giver, you can score a maximum of nine and the guessers a maximum of five. Because the active player only scores for what is inside the scoring frame, if they’ve managed to get everyone close after the first cue, it might strategically make sense to stop there and prevent guessers from earning more points. That doesn’t happen very often, but it can with a good clue!

What I especially love about the game is that so many people of different ages can play at once. That’s so unusual in a party game. It’s also great because you can hop in late and still be competitive, although most people are in it for the laughs and not the final score! We’ve played it enough times that I’ve seen people get very serious while others have played it laid back with a beer in hand. I’m excited for Hues and Cues to hits the shelves and think it will be great for game groups, families and even be a nice alternative for the Bunco crowd. We were fortunate to get an early copy of the game since Scott is the designer, but it’s destined for shelves soon.The Op continues to give hints as to the news about Hues and Cues on their Facebook and Twitter channels so hone in for details.

12/2020 Update: After releasing in local game stores in June, it’s been getting rave reviews globally! We’ve seen plenty of stateside reviews and have been thrilled to see Hues and Cues hitting game tables across the world including Taiwan, Japan, South Korea, Russia and United Kingdom! Surrounding the holidays, it’s been consistently selling out on Amazon and Target online as well as Target and Barnes & Noble brick and mortar locations! If you’re trying to locate a copy, in addition to contacting your local game store, you can also check The Op directly.

What group of people would you play Hues and Cues with? 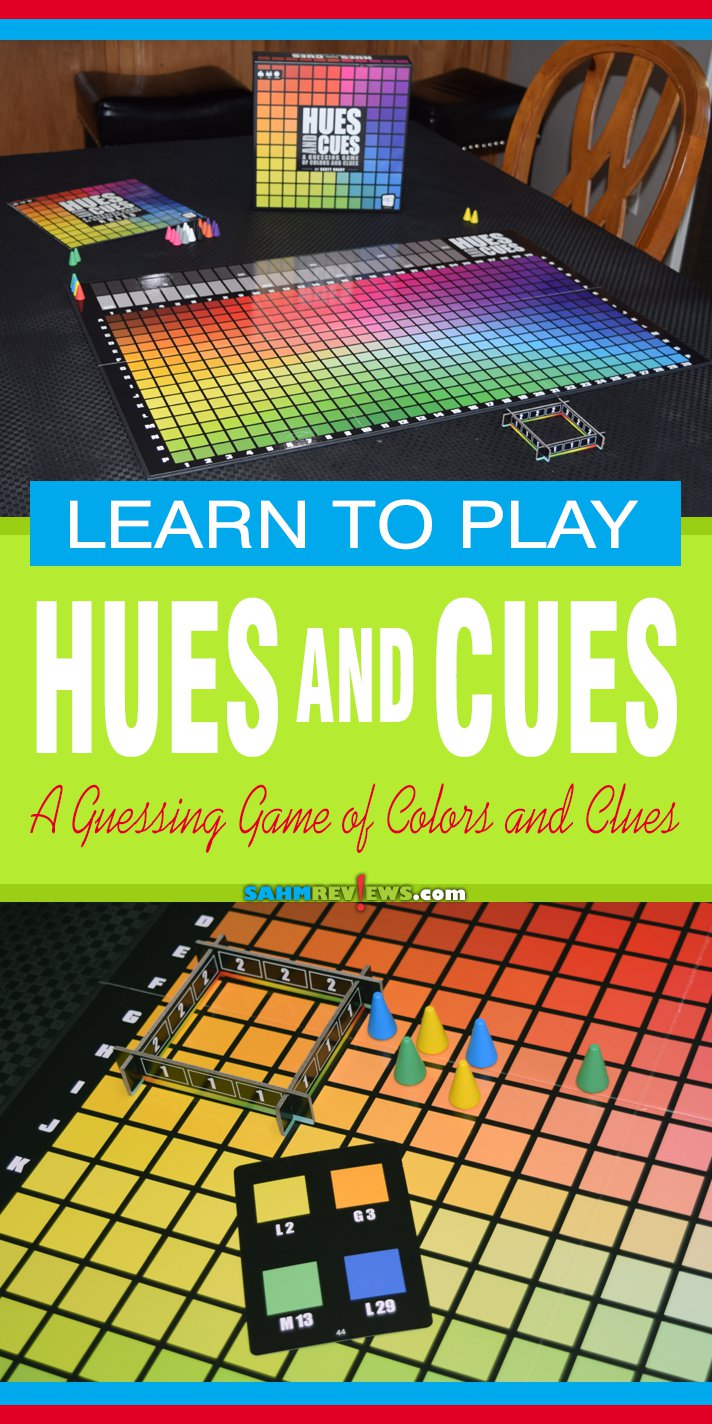