Home / Recreation / Games / Tanks, But No Thanks! Strategy Game Overview 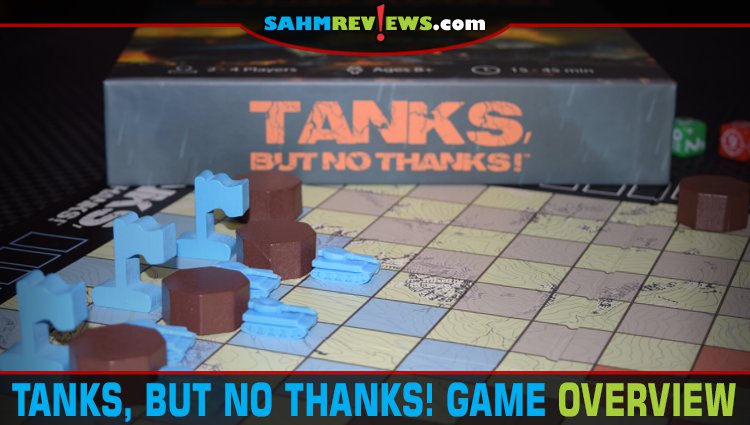 Tanks, But No Thanks! Strategy Game Overview

One of the hardest parts about trying a new game is the task of wading through the instruction book. When we want to tackle a new game, we know it means someone in the group has to allocate time to learn how to play then additional time to teach it to everyone else. It’s like telling a kid they need to read the instructions for the jungle gym before going out to recess. A simple rulebook is one of the bonuses of playing Hues and Cues. It doesn’t take much to learn and teaching it requires about five minutes. For that matter, you can usually just have the person who is teaching take the first turn and everyone will have the hang of it by the time that person’s turn is over. It isn’t very often that we find simple rules in a strategy game, but Tanks, But No Thanks! from Tin Robot Games shows it is possible. The instructions are literally one page and the tagline on the box says, “Learn the rules and start playing in 5 minutes.”

It’s a player-elimination battle game (for 2-4 people) where the goal is to be the last player remaining. Each game consists of a board, dice and barriers along with tanks and flags for each player. The way you set it up is dependent upon how many people are playing. Two is head-to-head across the board. With four players, each person claims a side of the board for their home base. A three-player game is set up in a triangle like Pirates vs. Pirates with two in the corners of the board and the third on the opposite edge. Each player sets up five tanks, three base flags and barriers according to the images in the instruction book.

Determine a starting player then take turns clockwise. You have exactly two choices to make on your turn. Either roll the green die to move your tanks OR the red die to attack. To make the decision even easier, if there isn’t a target within reach then you must move. Barriers cannot be moved nor shot through so that also helps with your decision-making process.

When you roll the green die, you may opt to use the entire roll on one tank or spread the movement across multiple. For each number, move a tank one space in any direction. If you know anything about tanks, then you know they are pretty mobile and can move forward, backwards or sideways. The same holds true in the game; you don’t need to take extra movements in order to pivot or reverse course. The only thing you cannot do is move through barriers or bases, including your own.

If you decide you want to attack, you’ll identify which tank or flag you are aiming at THEN roll. In order to hit the target, you must roll the equivalent or greater number of spaces it is away. Tanks, But No Thanks! keeps things simple in that you don’t need to keep track of the health of a tank or base. If you are within range and you hit it then it the target is destroyed.

You continue clockwise around the board opting to either attack or move, removing enemy tanks and bases as they are destroyed. A player is immediately eliminated if they lose all of their tanks or all of their bases.

Once you’ve gotten the hang of playing, you can increase the difficulty by incorporating random Mission and Bonus Power cards. Power cards are one-time use and allow players to bend the rules for attack, movement or elimination requirements. Secret Mission cards change the objectives entirely, making Tanks, But No Thanks! much more unpredictable.

Because the rules are so simple, Tanks, But No Thanks! can be enjoyed by younger players. Even with the incorporation of the Top Secret cards, you can expect to complete a game in well under an hour. While it doesn’t appear to be available on Amazon, you can ask your local game store about availability or order direct from Tin Robot Games. Set your sights on Facebook and Twitter to learn about some of the other titles in their product line.

What’s the longest you’ve spent learning how to play a game?