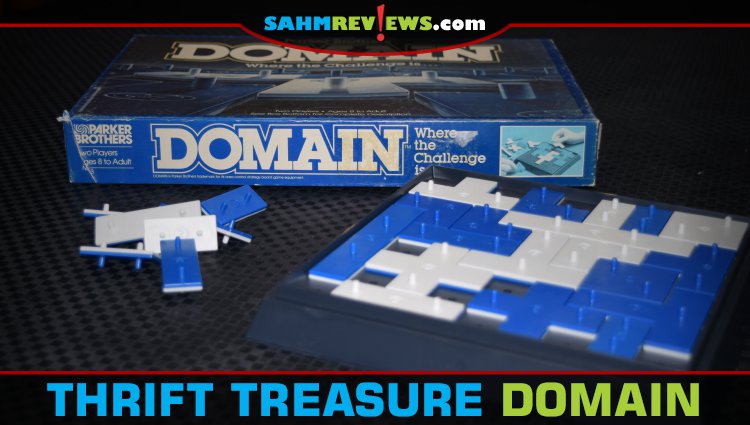 Ever since the release of Tetris, there have always been board games utilizing polyominos. There has been somewhat of a resurgence as of late with the publication of games like Team3, Jetpack Joyride and Ubongo!. But we’ve always found older games with the same theme at thrift. Blokus and Akumulate are two which come to mind immediately.

This week at our Goodwill we happened across Parker Brothers’ Domain. This early 80’s abstract game uses dual-colored polyomino pieces in a head-to-head match between two players. The object of Domain is to have the most spaces in your color at the end of the game.

Included in the box are twenty-six molded plastic polyominos and a plastic board with a 9×9 grid. Holes in the board match up with pegs on the pieces to help keep everything in place during play. Players agree on which color they will represent (white or blue) and who will go first.

On a turn a player will place any of the polyominos anywhere on the board with their color up. The other player will then do the same, continuing in turn order. If a new piece is laid orthogonally adjacent to any part of an opponent’s shape (or shapes), it is turned over to the opposite side, much like in a game of Othello. Note, all of the polyominos can be flipped as a mirror. There are no shapes which cannot be flipped and placed in the exact same position as it was previously.

A game of Domain ends when there is no more room on the board to place any shapes. Each piece has a number on it which represents the area it covers. Total them up for each person and the one who has the highest is the winner. There are no official rules on how to handle ties, so we gave the win to the person who had the largest contiguous area.

Additional rules for Domain are included to turn up the complexity. Intermediate players will divide the shapes evenly before starting. Additionally, you must play adjacent to at least one of your opponent’s shapes. Experts play in the same manner with the variation that all adjacent shapes must be flipped – even your own!

Even though it’s an older game, Domain has managed to maintain a decent ranking on BGG. Considering it is a themeless abstract game, this is impressive given the type of audience at that site. Long out of print, if you can’t find a copy at thrift, there are plenty on eBay for reasonable prices.

What is your favorite polyomino game?