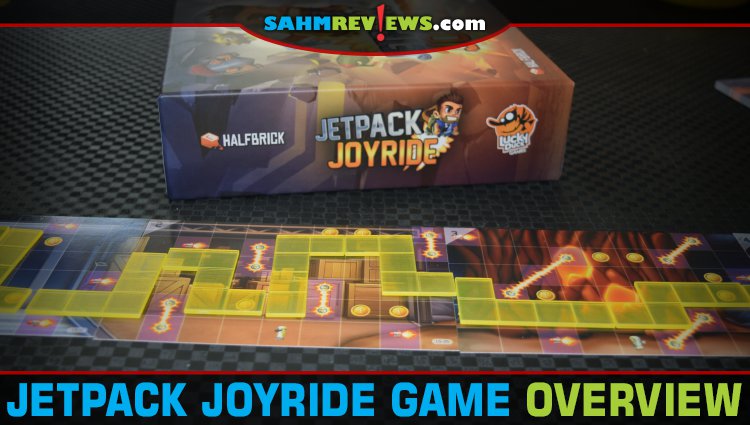 I’ve lost count of how many polyomino games we have featured here in the past year or so. The interesting thing is that while each used these common shapes, they’ve all had unique themes, boards, rules and goals. As an example, Team3 has you stacking pieces using the “see/hear/speak no evil” concept. You’re selecting from two shapes in Second Chance as you try to color in an entire grid. When you play Tuki, you’re racing to build the structure. And Ubongo is a puzzle game. I could go on and on, but I think I’ve made my point. Just because something has similar pieces doesn’t mean it’s the same. When I opened Jetpack Joyride from Lucky Duck Games, I discovered another completely different way to use these pieces! Then I set it up and the squeals from my daughters made me realized this isn’t just a polyomino game. It’s an adaptation of an app that they claimed they played countless times on long car rides! We knew this would be a hit before we even started playing. 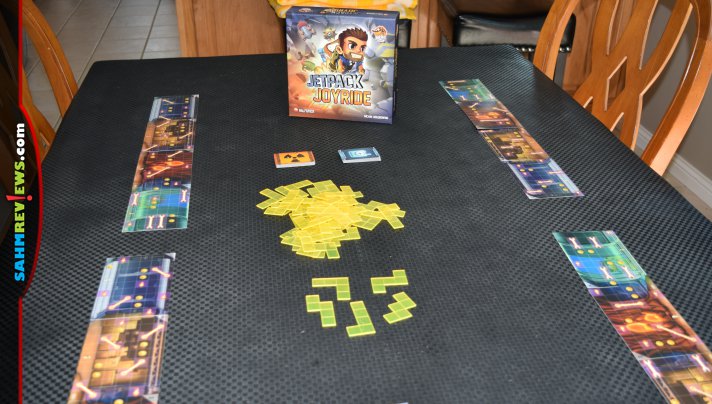 In Jetpack Joyride, all players use polyomino tiles to make their way across a set of four sector cards. There are four sets numbered 1-4. Give everyone a set then randomly select a side of each card to use. Shuffle the decks of Gadget and Mission cards independently and place them near the center of the table. Create a pool of tiles centrally located so all players can reach. The game will take place over three rounds. 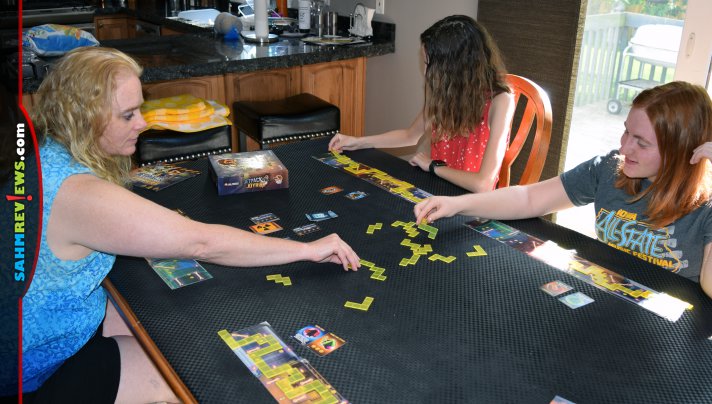 You’ll simultaneously be racing to grab tiles and add them to your lab sector cards, capturing coins while dodging obstacles. As I mentioned before, it’s three rounds. Each will consist of three phases: Run, Score and Cleanup. 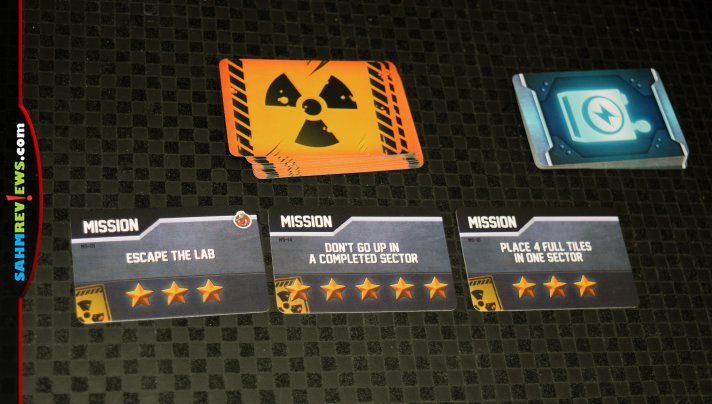 At the start of each round, you’ll reveal the top three mission cards. These vary in difficulty and victory points so read over them before beginning the run. Once everyone is familiar with the obstacles and the mission objectives, someone gives a notice to take off. Everyone immediately grabs a track tile from the general pool. Once you’ve placed it in your lab, find another piece from the pile and add it to your lab, connected to the end of the prior. These tiles represent the path you’re taking to get through the lab.

There are a few rules to follow for placement. Your first tile must have at least one of its squares on the outside of the lab and all future tiles need to connect orthogonally to the end square of the prior. Tiles may not be placed over obstacles nor may they overlap with part of the existing path. If you feel like you’ve gotten yourself into a pinch, you can retrace your path and take off the most recently added tile. Return it to the pool immediately. You may then opt to select a new tile to place or remove the next one back. As long as you remove them one at a time and return each to the pool as you go then you can trace your way all the way to the entrance and start over. BUT… it’s a race to get through so that’s not really a good idea! 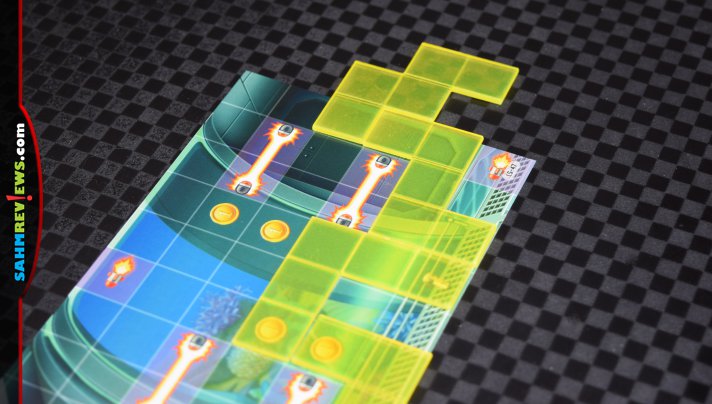 The run phase ends immediately when one player escapes their lab by placing a tile that exits beyond the right edge. That player yells, “I’ve escaped!” and nobody may add anything else to their own labs. The run can also end if everyone passes by shouting, “Pass.” You’ll do this if there are no available tiles that can legally be placed in your lab – or if you don’t want to place any more. If someone draws the last tile from the pool and places it in their lab then the run also ends. 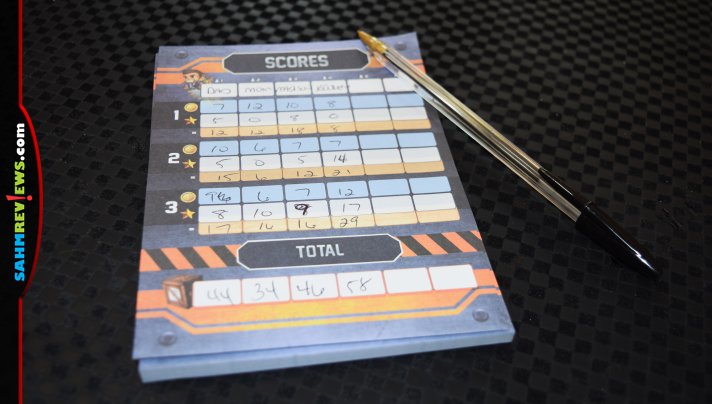 After completing the run phase, players tabulate their score based on coins collected, stars from Missions completed, and bonuses from Gadgets (in second and third rounds). Points are then deducted for each tile that violates placement rules, including the entrance tile, overlapping throughout the run and hitting obstacles. 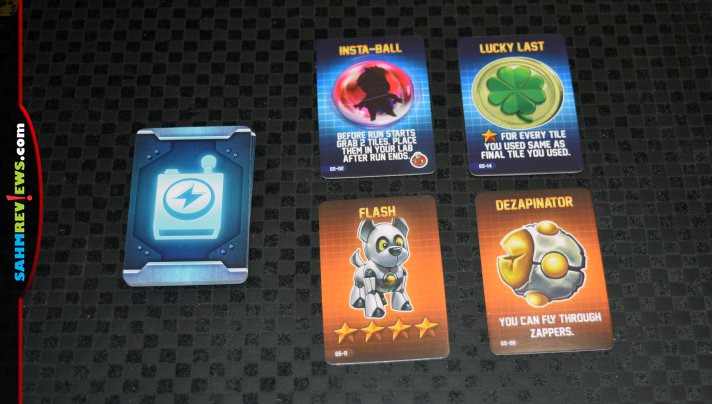 After scoring, turn over Gadget cards equal to the number of players and the person with the lowest total selects first. These were just thematic cards to me, but the girls were both excited to see some familiar gadgets from the app. Gadgets offer extra points or coins during the run or allow you to ignore certain obstacles. The gadget you acquire after the first run will be valid for the second and third runs. You’ll also earn an additional gadget after the second run. Once gadgets are divvied up, the cleanup phase begins. Tiles are turned to the general pool, new Mission cards are revealed and players pass their lab cards to the left. The game ends after three rounds and the winner is the joyrider who tabulated the most points.

Jetpack Joyride is a fast-paced game that requires quick decisions on what path to take to get through the lab. If you’re looking for a competitive puzzle game, start with this then follow-up with Chronicles of Crime, a cooperative deduction game. Curious about what other games are in the works in their lab? Follow Lucky Duck Games on Facebook and Twitter. If you’re ready to blast off with Jetpack Joyride, grab a copy on Amazon or direct from Lucky Duck Games.

If you had a jetpack, what would you use it to navigate through?