A couple weeks ago we were playing Tuki, a polyomino game where you not only built a vertical structure that matched your card, you had to figure out exactly which neutral-colored pieces to use to elevate and support the entire thing. Players would race to be the first to complete it and earn a point. It’s not as easy as it sounds since you had no idea of which pieces you’d need to use.

While at Gen Con, we discovered a new game by Brain Games Publishing with the interesting name of Team3. Based upon the proverb of The Three Monkeys (see no evil, hear no evil, say no evil), Team3 challenges three players (or six, if played as teams) to build a two-dimensional puzzle in three dimensions. Each player will take on the role of one of the monkeys and will be limited in how they communicate with each other! 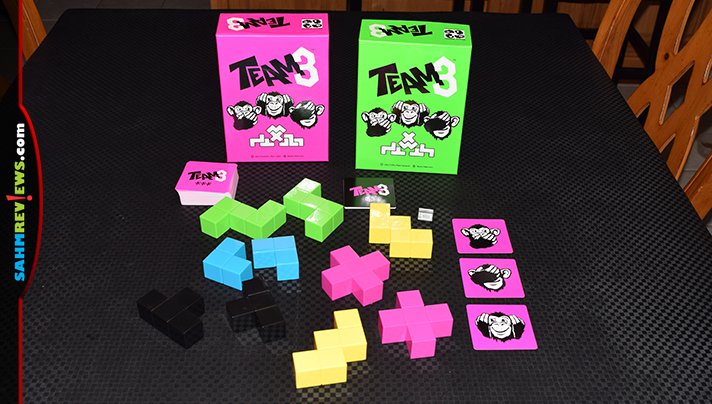 Inside the box you’ll find a set of ten 3-D polyomino pieces (two of each shape), 70 blueprint cards, role cards and an optional expansion. The blueprint cards are divided by difficulty and you will select one type to use in a game. Shuffle those cards into a deck and set them in the center of the play area. Deal out the three role cards in order, starting with the Architect (say no evil). The next player on the left receives the Supervisor role (hear no evil) and the last person becomes the Builder (see no evil). You’ll also need someone’s phone or kitchen timer to keep track of the 3-minute time limit. 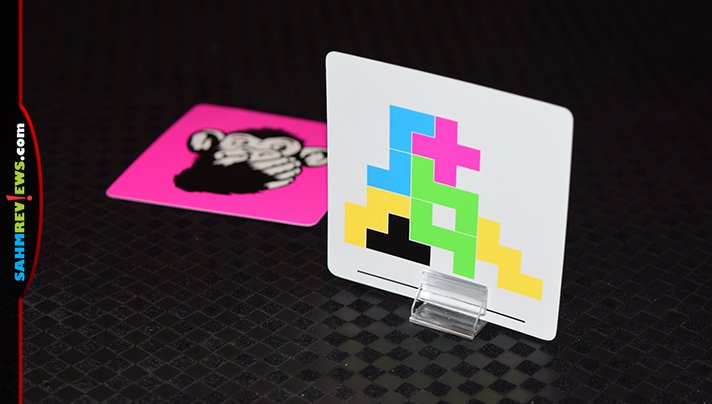 To begin a round of Team3, the Architect draws a blueprint card and examines the drawing. The Builder then closes their eye and the polyomino pieces are mixed and placed withing the Builder’s reach. Once the Architect puts the card into the included stand, the timer is started and building begins. 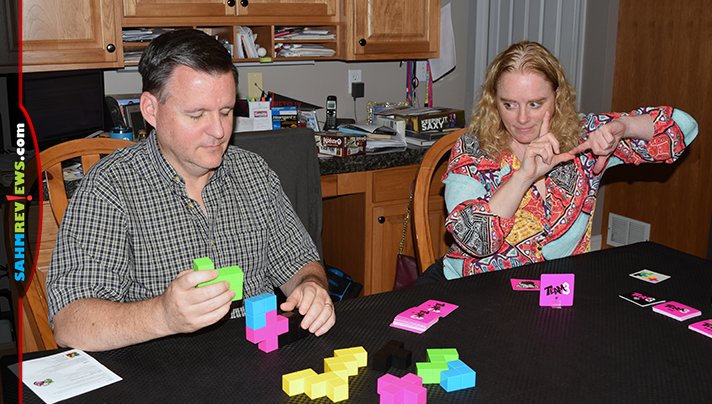 The Architect cannot speak, so they must convey their building instructions to the Supervisor using only hand signals and gestures. They may not make any noises at all other than to say “finished” if it is complete. Facial expressions, clapping and other non-verbal forms of communication are allowed, with the exception that they may not point to pieces on the table. If the Architect violates any of these rules, the round is considered a loss. 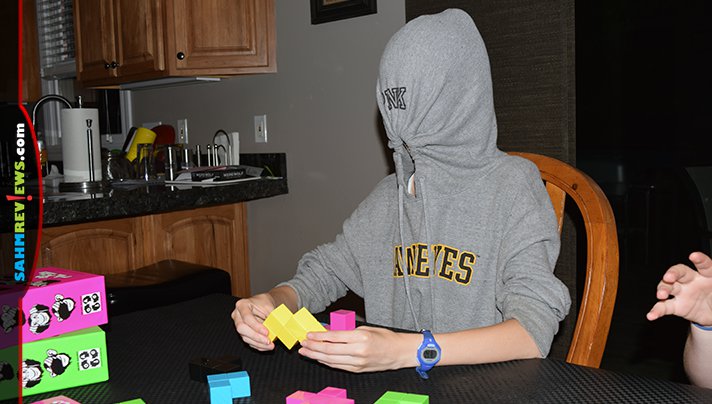 The Supervisor, who cannot hear, interprets these signals and speaks to the Builder. There are no restrictions on what the Supervisor may say – they just have to hope they’ve understood the Architect’s instructions correctly! The Builder, who cannot see because their eyes are closed, must listen to the Supervisor and try to build the structure. They will have to locate the correct pieces and carefully place them into the ever-growing building. The final creation will exist in two dimensions (one square deep) but be many squares tall! If completed within the 3 minute time limit, collect the card, pass the roles to the person on your left and start another round! 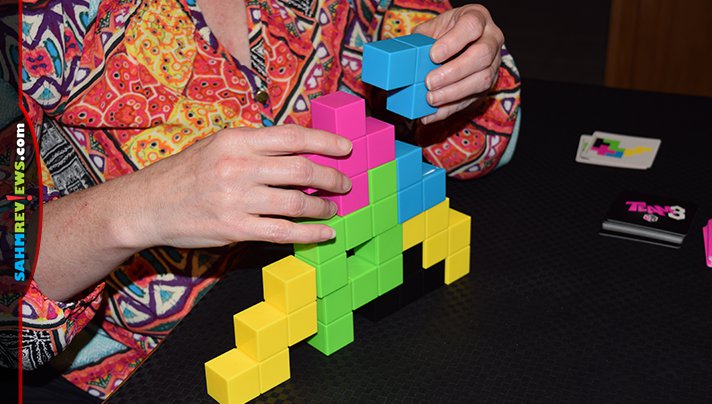 The unique way in which Team3 challenges you to build the structures is also a limitation. It cannot be played with less than three players, nor will it support more unless you have another full team of three to compete with (unless someone sits out each turn). In this case of two teams, each takes half of the pieces and works only on level 1 challenges at the same time. 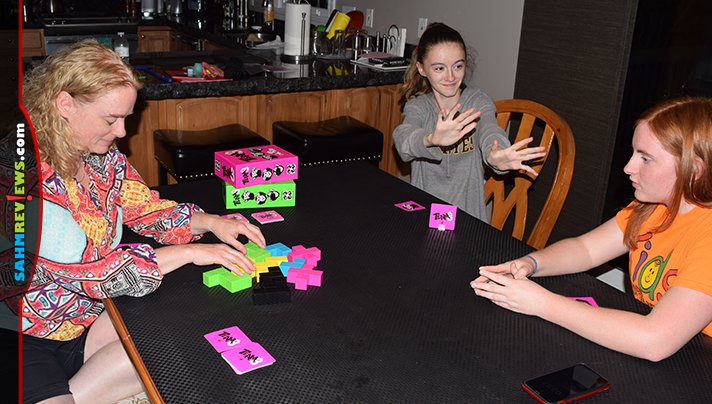 A second set of Team3 can be purchased to allow up to four teams to work on one level 1 puzzle or two teams to attempt any level of difficulty. There are two different-colored boxes of Team3, each with its own mini expansion included. The neon green box has a Mind Merge challenge where you must construct two smaller buildings, one with each hand. This variation requires 5 players (two Architects and two Supervisors) and the Builder must resolve both sets of instructions at the same time!

The hot pink box version included a Dimension Tension expansion. The cards now show a front-faced representation of a 3-D building and you must not only convey the instructions in the same manner (3 players), you also have to correctly interpret how to arrange the pieces in three dimensions to yield the final result. A lot more difficult for the Architect! This can also be played with six players in teams as in the original game.

Both versions of Team3 release this month and will be available at your local game store and on Amazon (Pink, Green). If you’d like to see more about Team3, check out the dedicated page on Brain Games Publishing’s website to find downloadable rules and instructional videos! And if you’d like to be the first to find out about some of their upcoming products, including another flicking game for fans of ICE COOL, make sure you’re following Brain Games Publishing on both Facebook and Twitter!

Which of the three monkey are you?