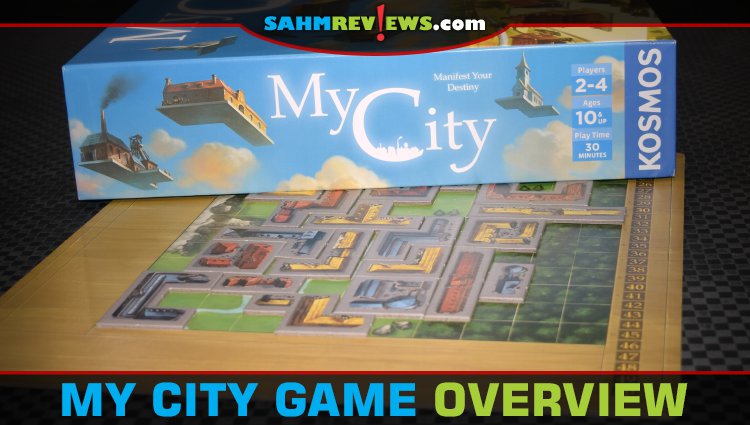 If you are new-ish to the site, you are probably unaware of how many polyomino games we have featured. We showed off several unique uses including Team 3, Tuki, Cottage Garden, Second Chance and Patchwork Doodle in late summer of 2019. Since that time, we have showcased many others from that same genre of game. Maybe it stems from my longtime love of Tetris, but I’m a huge fan of these types of spatial puzzle games. While each separate game offers a unique experience, within each of those it’s always the same. We recently devoted some time to playing My City, a legacy game from Thames & Kosmos and had trouble finding a stopping point. At the end of each game, every player’s board changes depending on how they placed. Since I can’t play it right now, the next best thing is to talk about it so… here you go!

My City accommodates up to four players. While you can play it with less, our experience with the maximum player count has been fantastic. If you’re able to get three other people to commit to returning to your game table for a handful of sessions, you won’t regret it. Give each player a city board, scoring cube and 24 pieces that match the animal displayed in the top corner of the board. Shuffle the construction cards and place within view of all players (and within reach of at least one person to be able to flip). Stack the envelopes in order then take the first one and you’re ready to go!

The game is very easy to get started on because there aren’t very many rules in the beginning. Each envelope contains information and instructions for a specified number of episodes. Like the boards, the rules continue to evolve as the game unfolds. This overview addresses the starting episodes, but there are scoring, placement and others changes in future envelopes!

Each round consists of two steps: revealing a construction card then placing the related building tile onto your city. The very first building must be placed alongside the river. In addition, it must only cover light green spaces, trees and rocks. You can’t build over forests or mountains and may never extend a building across the river. They’re buildings after all… not bridges!

After all players have constructed their first building, another construction card is revealed and the process is repeated. All buildings after the first one must be placed so they touch at least one existing building.

But there’s more to it than just creating a city of side-by-side buildings. Scoring at the end of the episode is based on how many trees you can see followed by a deduction for visible rocks and empty grassland. So in addition to simply needing to get buildings into the spaces, you’ll want to carefully navigate the terrain to leave trees uncovered but rocks constructed over.

You start each episode with the scoring cube on the 10 because there is the potential to lose points during construction. With each construction card you will 1) place it according to the rules, 2) forfeit a point and pass on that card or 3) drop out of the episode entirely by choice (to not take more negative points) or because you cannot successfully place anything else. After all the construction cards have been revealed, you’ll score.

After all the scores are tabulated, players are ranked from most points to least. The instructions indicate what each player earns for their status. The winner might receive two points onto their city, but also receive a rock sticker to add to their board. On the other hand, the player with the lowest points may receive a sticker with a tree. It helps balance the games and keeps players from falling too far behind. With each episode and each envelope, the game continues to change for everyone in different ways!

My City has been an excellent addition to our polyomino selection of games, but the legacy aspect of it has us coming back for more (or not wanting to quit)! Copies are readily available at local game store, on Amazon or direct from Thames & Kosmos. It’s incredibly affordable for the amount of hours of enjoyment you’ll get out of it! Thames & Kosmos consistently churns out award-winning games so be sure to visit them on Facebook and Twitter to see what other exciting games they are building.

What is your favorite legacy game?