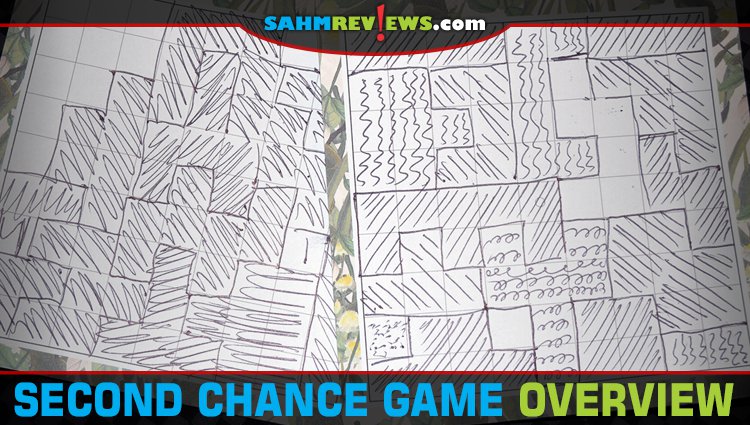 Our absolute favorite board game convention to attend is Geekway to the West, even though it’s much smaller by comparison to Origins Game Fair or Gen Con. The simple fact that the convention focuses on playing games over selling them is what makes it so charming. 3,000+ of your closest friends all in one place, doing the same thing and without the divisiveness you see in today’s world. We cannot wait until next June!

Another thing that attracts so many visitors to St. Louis for Geekway is the opportunity to win and take home some of the games you play. Geekway boasts one of (if not “the”) largest play-to-win libraries in the world. Each year they purchase hundreds of brand new games from dozens of publishers so we can be among the first to experience these new titles. While we don’t have a lot of luck having our number drawn to win one, we definitely get our money’s worth with all the new games we get to try.

One such game that captured our attention this year was Second Chance by Stronghold Games. Created by famed game designer, Uwe Rosenberg (Cottage Garden, Patchwork, etc.), this small-box game capitalizes on the current craze of roll-n-write games in a different manner. This one we’d have to call “flip-n-write” since it uses no dice and instead opts for cards! It’s no stretch of the truth to say we played it over a dozen times at Geekway and are excited to finally have a copy here at home a couple months later! 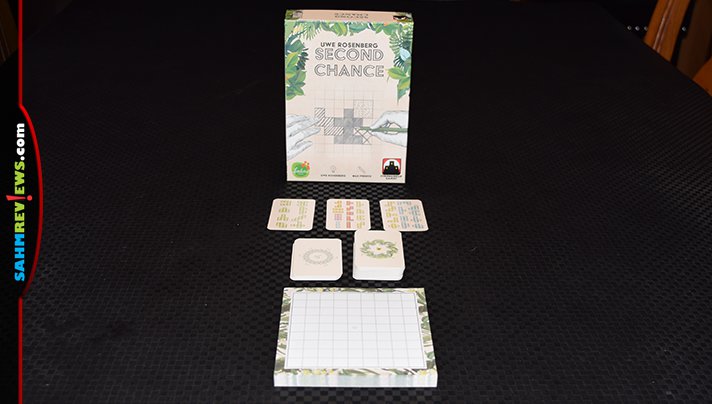 Second Chance is a game about arranging randomly-drawn polyomino (Tetris) pieces as efficiently as you can. Instead of including dozens of various pieces, you will be drawing them onto an included sheet of grid paper. Each player begins the game with one of these sheets and a pencil. The 13 Starting Tile cards are shuffled and one is dealt to each player (up to six can play Second Chance). The other deck of 40 Puzzle Tile cards are also shuffled and placed in the center of the play area. Overview cards showing what tile types and quantities are available in the game are also distributed so all players have access to them. 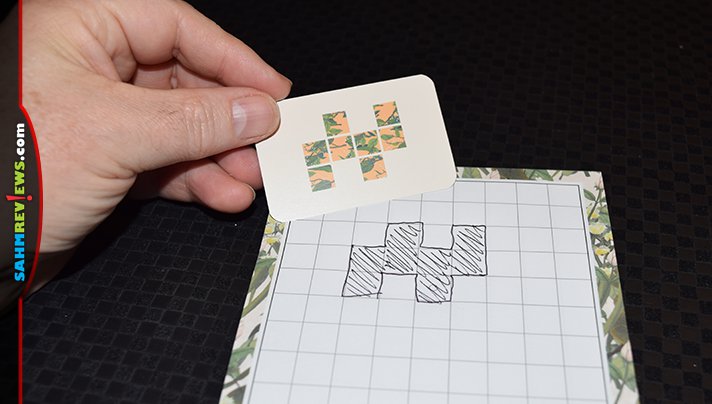 Using the Starting Tile card dealt to them, all players must draw the depicted polyomino onto their piece of paper, making sure one of the squares touches the center space of the grid (marked by a circle). When drawing your shape, trace the outline first and then fill it in with whatever method or pattern you prefer! 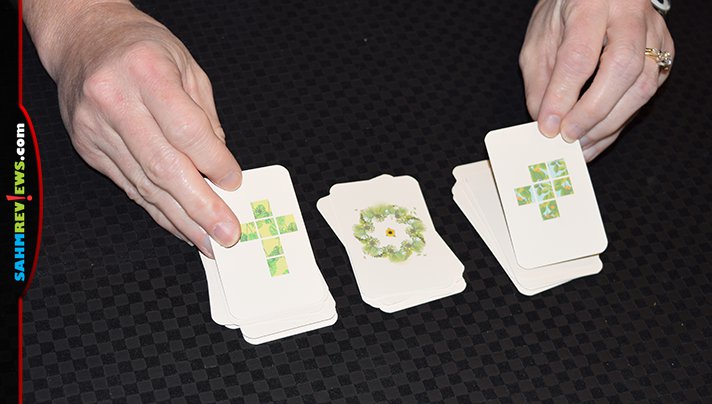 There is no need to choose a start player since all participants will be playing simultaneously. At the beginning of each turn, one player turns over two cards from the Puzzle Tile stack and sets them on either side of the deck. Players examine then choose one of the shapes to draw on their grid. 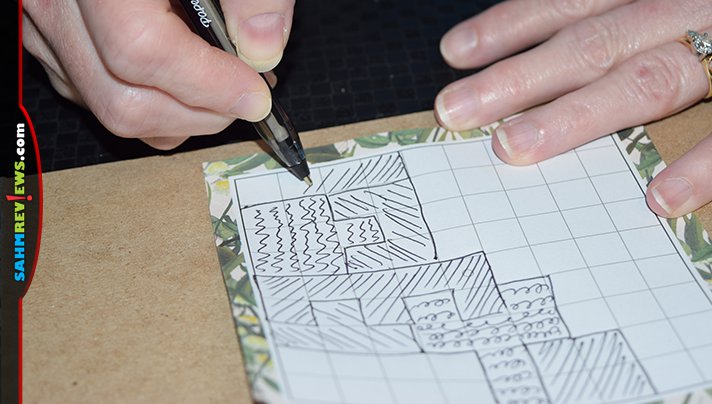 The pieces may be rotated or flipped and may be placed anywhere on the grid as long as they don’t overlap another piece or extend beyond the edge of the board. You also may not erase or change any previously-drawn pieces! 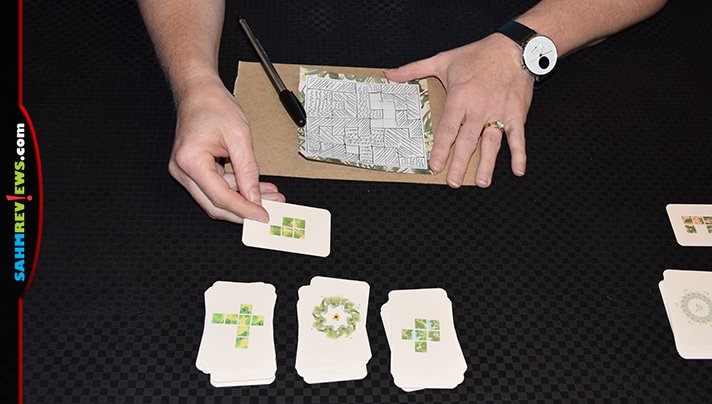 That’s basically all you need to know to play Second Chance! Two new cards will be revealed at the start of each turn and continue until someone cannot draw either of the pieces onto their grid. At this point they get a “second chance” to remain in the game. That player (or players) will turn over the very next card in the Puzzle Tile deck and try to place it into their grid. If they can, they remain in the game and turns continue as normal. If they cannot, they are eliminated from the game. As a consolation for going out, the first player to be eliminated is allowed to draw a “1” onto any open space on their board. This not only fills up a space, it also counts as a tie-breaker, if needed. 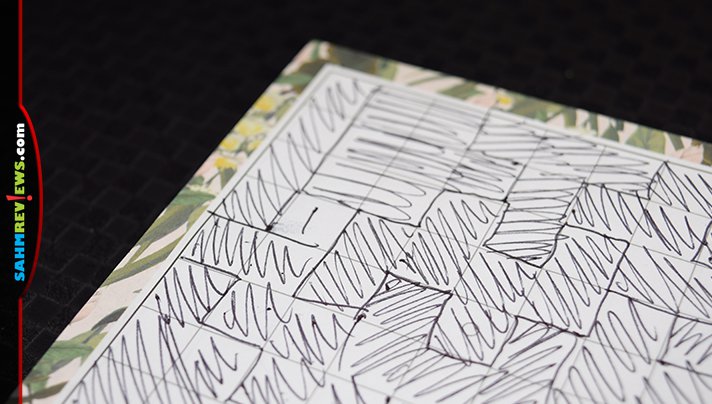 A game of Second Chance ends when either all players have dropped out because they cannot draw their piece, the deck runs out of cards or a player fills their grid entirely. In the latter, that person is the winner of Second Chance. If all players have dropped out or the group has run out of cards, all grids are examined to see who has the fewest open spaces remaining – and that person wins! If there is a tie for fewest and one of those players has the “1” in their grid, that person is victorious. Otherwise, the tie stands. 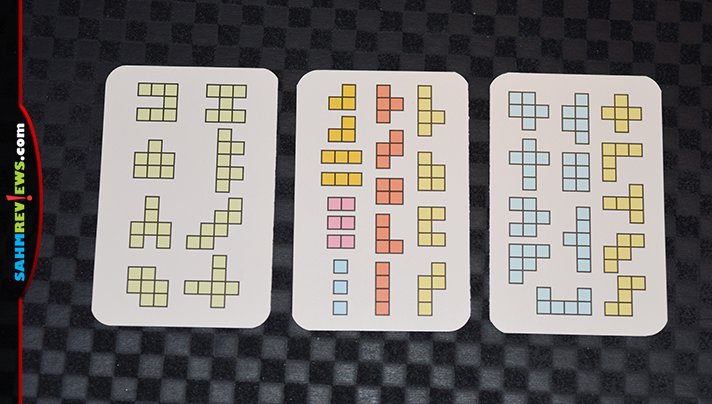 There are also solo rules that challenge you to play three full games and score less than 10 points in total (you don’t get to write the “1” when you go out). This can be pretty challenging since all it takes is two bad cards (well, actually three…) late in the game to drastically affect your score!

Second Chance has an MSRP of under $20 and you’ll find it on Amazon or at your favorite local game store. If you run out of grid paper (which you will if you play it as much as we do), pick up a pad of any graph paper right now during back-to-school shopping and make your own! Don’t forget to include the circle in the middle of your 9 x 9 grid to highlight the starting location!

If you’re having trouble locating a copy locally, enter to win one for yourself shipped direct to you by Stronghold Games! Using the form below, maximize your chances by completing all of the entry options and then come back each day to enter again!