Ha! I bet you thought after our string of roll-n-write (Lanterns Dice, Kingdomino Duel, Rolled West) and flip-n-write games (Second Chance, Deadly Doodles, Kokoro) a few weeks back that we were done with those for a while. Nope. I have found this genre to be very fulfilling at a time when our kids’ schedules are too busy to sit and play a lengthy game like Tapestry or Lorenzo il Magnifico. They take little time to set up, varied amounts of time to play (depending on the game and number of players) and are entertaining. They are quick and work well as a brain break in-between studying for exams and doing homework so that’s a bonus, too. So naturally, we continue to seek them out. Why not since they offer all those benefits and are usually don’t take up much shelf space nor put much of a dent in the wallet. 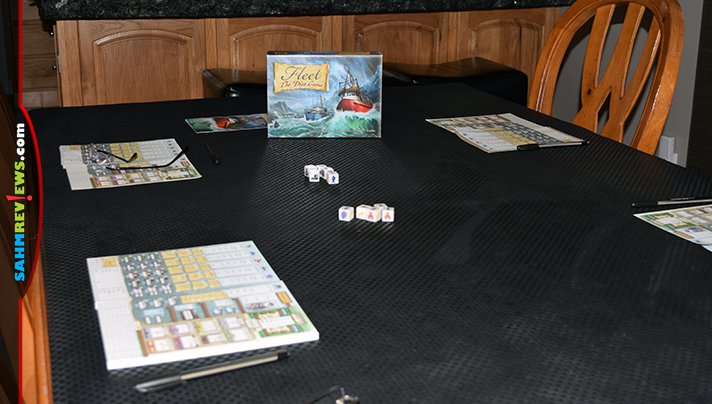 The latest that we decided to take for a test drive is Fleet: The Dice Game from Eagle-Gryphon Games. The game is about a fishing port that is filled with a fleet of fishing vessels – some who have opted to endure the storm while others have chosen to stay at the safety of the dock. Over the course of ten rounds, you’ll take on the role of a captain who is making the decisions on what to do. Determine the number of dice required according to the number of players (up to 4). 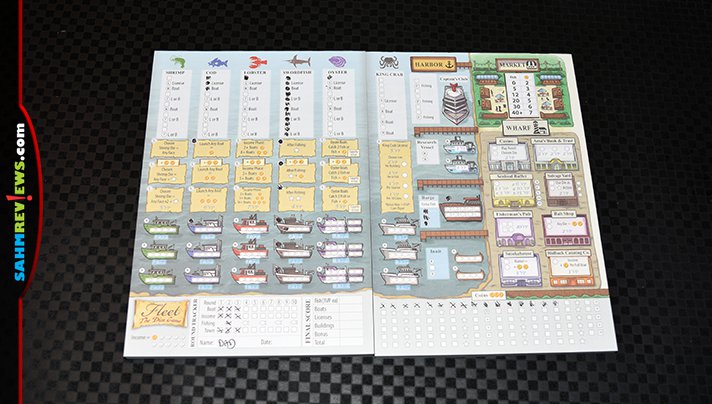 Give each player one sheet from each of the two pre-printed pads of forms. Separate the dice into a boat dice pool and a town dice pool. Each player rolls one boat die to determine their starting bonus, marks the three corresponding boxes on their score sheet then takes the related license and launches the boat. 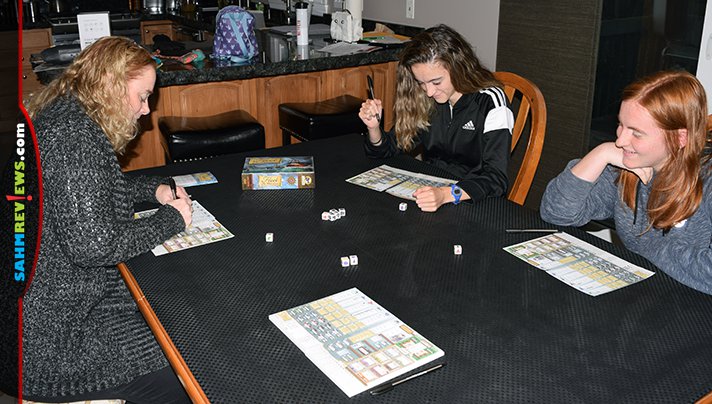 As I mentioned, Fleet Dice roll-n-write game is only ten rounds long with each consisting of four phases. The Boat Phase is first, followed by the Income Phase, the Fishing Phase (on even numbered rounds) and finally the Town Phase. Whenever you fill in a space on your score sheet, you’ll always fill the topmost spot. The rules refer to the space as a box, but they’re actually a variety of shapes. So don’t let any references I make to a box confuse you. 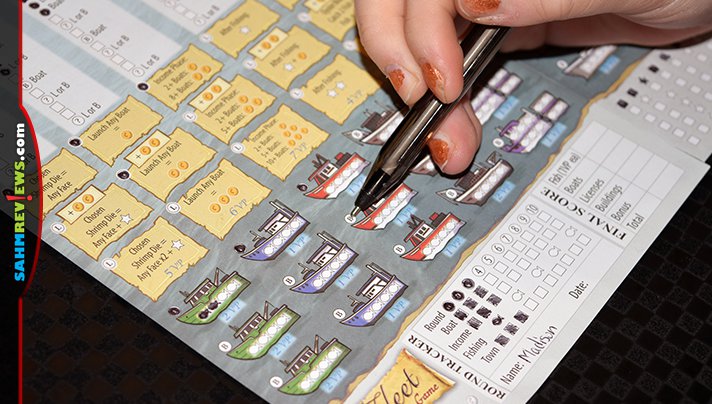 A first player is determined then each round the first player token is advanced to the next player on the left. To begin the round, the active player rolls all the dice in the boat pool. This is the equivalent to one dice per person plus an extra. Going clockwise from the active player, each captain selects a die to use then fills in the corresponding box on their worksheet. This leaves one die left unclaimed which means all captains are allowed to take that action! At any time, you may opt to gain one coin instead of using the results on your die. 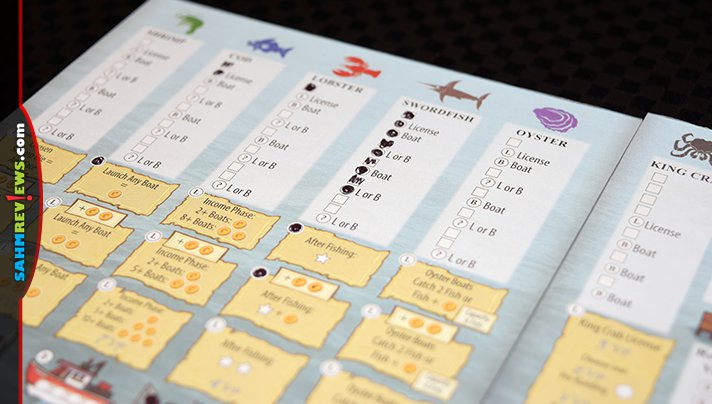 As you progress through the columns, you’ll unlock licenses and additional boats. Each type of fish offers a different license bonus. As the license increases, the bonuses get even better! They vary from earning extra income to being able to fill in extra boxes on the scoring sheet. 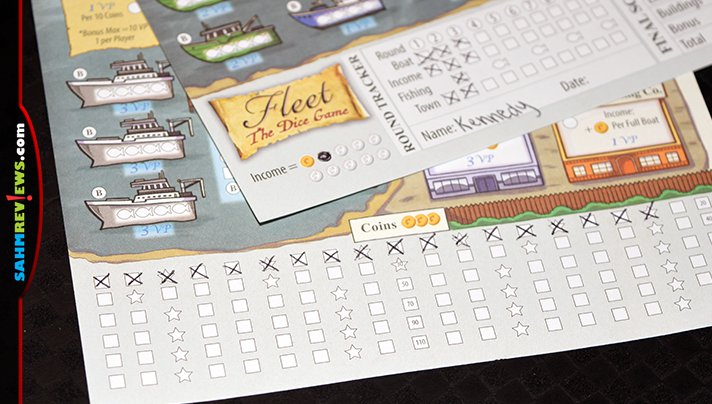 Each round, you’ll earn coins (marked on the bottom of the town sheet) based on your level on the income track (on the bottom of the fishing sheet). It’s important to note that these two can easily be confused as the iconography is the same. Be sure to read carefully about how you increase your “salary” level versus earning coins. The income track is improved by a couple bonuses whereas the coins you earn is based on the phase of each round. As you accumulate more coins you’ll mark off the boxes on the track. Whenever you fill in a star, you automatically get to fill in the next available space on either score sheet!  On even numbered rounds, you’ll earn fish based on how many boats you own. Fill in one fix box on each launched boat until it is full. 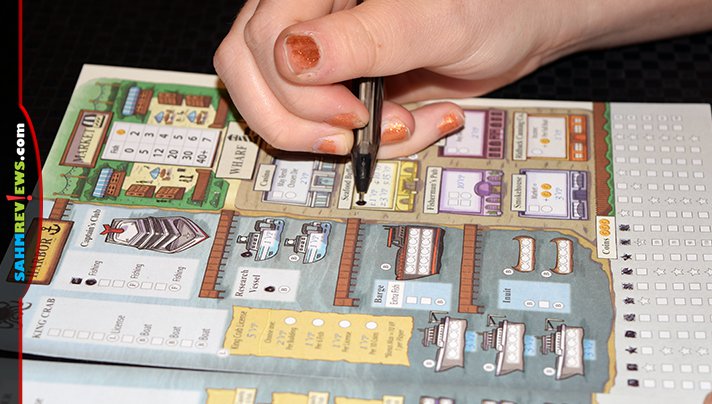 Now the first player gets back to work again by rolling the dice in the town pool. This includes town dice in addition to one boat die! In the same manner as drafting the boat dice, you’ll select one town die from the pool. The final die is shared by all players. If you select the Harbor, you mark a space on a ship in the harbor. The Wharf die corresponds to the spaces in the wharf. The Market die earns you coins. Each of the ships and buildings in the town offer different options or bonuses. While there are notes on the score sheet, it helps to have the rule book on hand to understand what each offers. At the end of the round, the first player token rotates and a new round begins.

At the end of the 10th round, end game scoring begins. Players total their scores across the five different categories. Fish, launched boats, licenses, points for Wharf buildings and the King Crab license bonus. The player with the most victory points wins Fleet Dice roll-n-write game!

If you’ve been collecting the EGG series or have started on the Bookshelf series with games like Xenon Profiteer then you’ll want to make sure you add this one too. You can pick up a copy of Fleet: The Dice Game at your local game retailer, directly from Eagle-Gryphon Games’ website or along with your other Prime orders on Amazon! Be sure to check out our overview of Fleet Wharfside then cast your line on their Twitter and Facebook channels to reel in the details about other new and upcoming releases.

When was the last time you went fishing?