Sometimes it feels like deja vu around here. On Wednesday, I shared with you an overview of Lanterns Dice and how it’s a roll & write take on the hit game we featured back in 2015, Lanterns: The Harvest Festival. Well… those feelings of deja vu are striking royally today with Kingdomino Duel from Blue Orange Games. Not only did we offer an overview of Kingdomino back in 2017, but we also reintroduced you to it last year to show how the Dized app works. 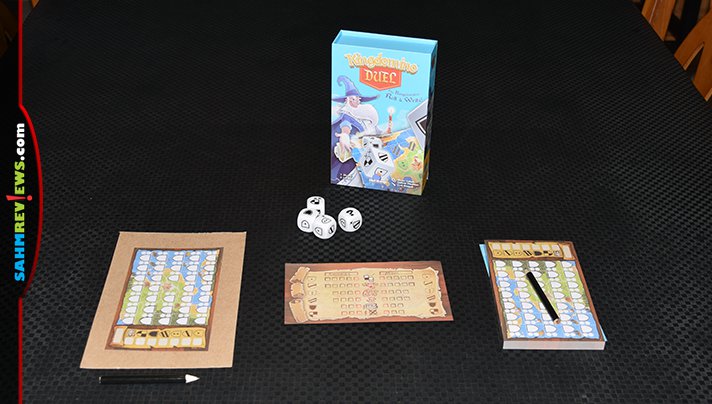 What’s intriguing about this version is that it isn’t an expansion to the original game, nor is it a re-theme either. Kingdomino Duel is a completely new game utilizing the roll & write mechanism we’ve been talking about in games like Bloom dice game and the aforementioned Lanterns Dice game, And as the name suggests, it’s a game for two people! Ready to see how hard it is to set up? Find someone as an opponent and hand them one of the score sheets. Take a score sheet yourself then place a third face down in the center, revealing the spellbook on the back. Grab the four dice and you’re ready to start.

The placement and scoring of Kingdomino Duel is similar to the original game. The drafting, however, is quite different. In place of the tiles are dice with seven unique symbols. Six different coat of arms to represent the various families who will be entrusted to manage your domain in addition to a joker. Some of the crests also display one or two crosses to represent the presence of dignitaries. 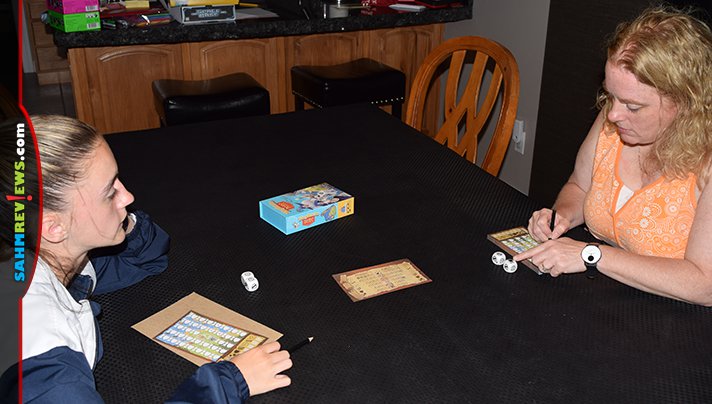 You and your opponent will take turns being the active player. This is the person who will roll the dice for the round then make the initial move by selecting one die to use. The non-active person will then take two of the three remaining dice. The fourth is returned to the active player. A joker is a wild and may represent any coat of arms. 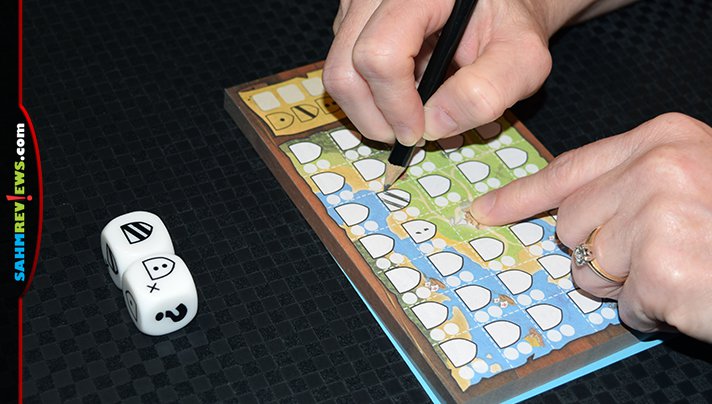 This is where things get interesting. You’ll place these two dice together to form a domino – much like the tiles in the original Kindomino game. Add this tile to your kingdom by attaching it to an existing section of the same coat of arms or directly to the castle. If the crest also included a dignitary (a cross), mark one or both of the dots next to the crest on your game board. 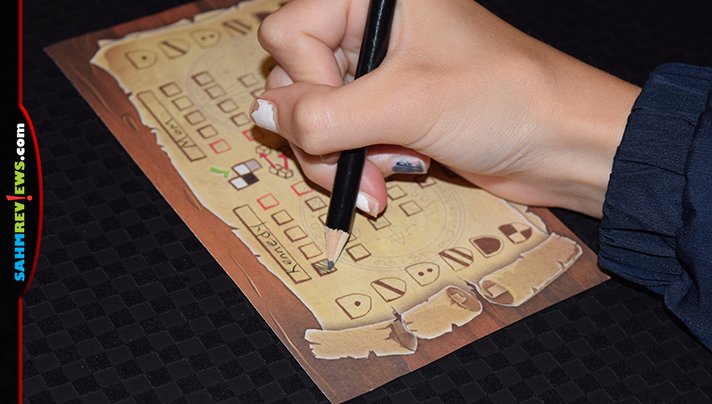 For each coat of arms die that doesn’t include a dignitary (excluding jokers), you’ll mark the corresponding box in the spellbook. The first player to complete one of the spells earns the right to use that spell within their kingdom. Some must be cast immediately while others may be used during a future turn. This drafting and placement process continues until at least one of the players has filled in the last coat of arms on their map or neither player is able to place their domino.

All of those dignitaries are now put to work. Count the number of Coats of Arms in a contiguous section and multiply it by the number of dignitaries in that same area. Record that number in the scoring section. Repeat this process for each of the six coat of arms. A domain that lacks any dignitaries doesn’t earn any points so be sure to factor that in when you’re placing your dominoes into the kingdom. Thankfully, there’s a rule that allows you to add one random dignitary to any section once during the placement process. Three bonus points are added if you posses the wizard. The player with the most points claims the royal victory.

Kingdomino Duel is a lightweight game, plays quickly and is extremely affordable. It’s namesake, Kingdomino, is a fantastic game but the tiles are always the same. The inclusion of dice in this roll & write version ensures variety from game to game. You can find copies on Amazon or check with your local game retailer for availability. Blue Orange Games continues to roll out new games so tune into their website for details or visit them on Facebook and Twitter.

How often do you seek out 2-player games?