The Fourth of July has just passed and we hope everyone had a fun (and safe) holiday weekend. We introduced our girls to the fun of setting off fireworks and playing with sparklers at home instead of attending our local fireworks show. Don’t worry, we still have all our fingers and toes! The girls knew ahead of time that we would be setting them off at dusk, so the anticipation throughout the day was killing them! To pass the time we elected to have a little family time at the kitchen table trying out a couple new games. Nicole and I have played these with our board game group, but the girls hadn’t had a chance to partake yet.

We decided that since it was the 4th, we’d pick a couple that followed the holiday theme. I’ll tell you about the second one next week, but first we grabbed Lanterns: The Harvest Festival from Foxtrot Games. Now it isn’t harvest time here in Iowa, but for the past few years it seems that releasing Chinese lanterns on the 4th of July has become all the rage. I can understand why – they cost less than a buck each and last a very long time in the sky. A much better value than the firecrackers that last only a few seconds. 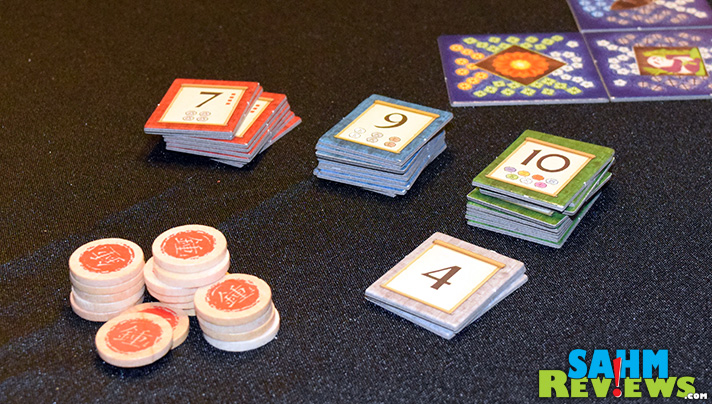 In Lanterns your goal is to match lantern colors and collect corresponding cards to make sets of four, three sets of pairs or one of each color. When you do so you are able to “make a dedication” – a fancy way of saying you turn in your set and collect one of the point tiles. These tiles reduce in value the more people take them, so there is definitely an advantage for completing them before your opponent. 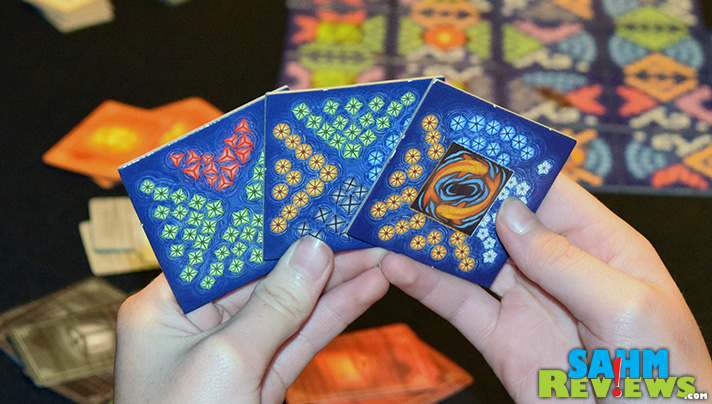 Every person works from a hand of three tiles. Each tile has four sections of lanterns of various colors. When you place a tile that matches up to a previous tile, you receive a colored card corresponding to the match PLUS every player receives a card for the color pointing towards them. 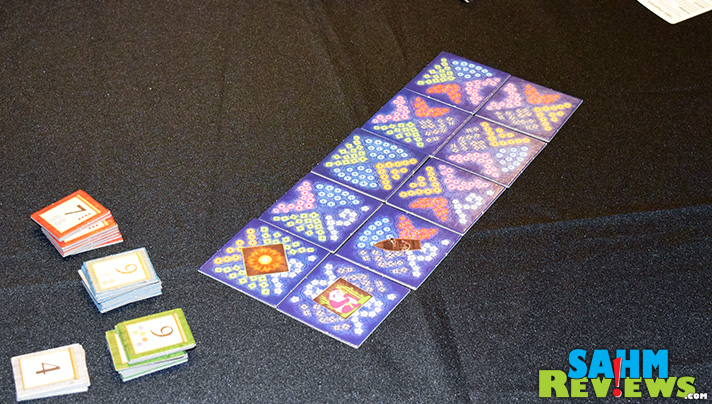 You do not have to match to play a tile, but your goal should be to always match at least one for the extra card. It is also important to pay attention to the number of cards of each color in the bank as they are limited to 8, and if they are all claimed, no more can be collected until someone returns one in a dedication or exchanges cards by using favor tokens.

Favor tokens are collected by playing tiles with platforms in the center (the ones with the square designs on them). Collect two tokens and use them to exchange one of your current cards for another card of a different color. It’s a very important feature of the game, as it may be the only way to complete your set if you don’t have any tiles with that color on it.

Play continues in order until all tiles are played to the lake (table). Once the last tile is laid, the game ends and everyone tallies up their points from their dedications. The player with the highest total wins – ties are broken by extra favor tokens held. 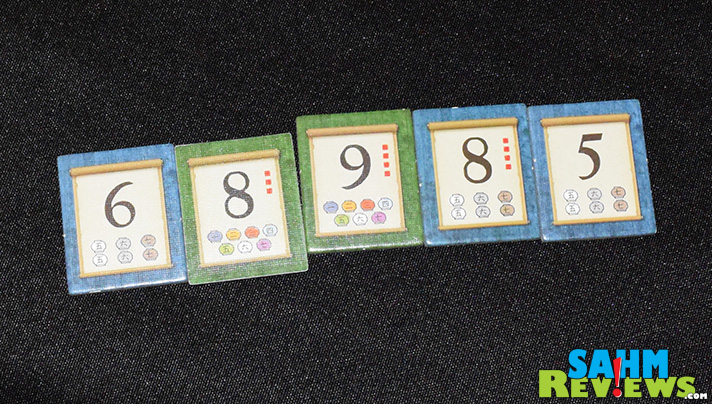 This is my score, and at first glance I thought I did pretty good. I came in last…

Sometimes you come across a game and wonder why it has a certain theme. Many of them could be better with a different theme or no theme altogether (abstract games). And yes, this is a game that could have been easily done with just colors – but the theme works! I found myself calmed in the serenity of the theme, imagining releasing the lanterns into the lake (or air).

It is simple enough to learn and could easily be played by kids much younger than ours. Rated for ages 8+, we found the 30 minute estimation to be right on the mark once everyone learned the rules. There is enough luck combined with strategy that no one should have an unfair advantage and I see it becoming part of our regular game arsenal for some time to come. After having at least 10 games played under our belts, I feel very confident in recommending this one for your family.

Foxtrot Games is a new kid on the block, and Lanterns: The Harvest Festival is only their second title. It came to light (pun intended) only thanks to a successful Kickstarter campaign late last year and has just finished shipping copies to all of their backers. It was even recently awarded the Mensa Select Award – a testament to the great design and mechanics of this title. You can now purchase a copy for yourself from Amazon or directly from your local game store. We hope to bring you information about their first game, Relic Expedition (and its expansions) in the future, but in the meantime be sure to keep an eye on their Facebook and Twitter timelines for other new product announcements!

A lot has happened in regards to Lanterns since we first featured it a couple years ago. Thanks to the overall success of the first run of Lanterns, Renegade Game Studios elected to become the primary publisher. Their developed distribution channels will certainly help Lanterns get into many more player’s hands!

Additionally, a brand new expansion, Lanterns – The Emperor’s Gifts, was released over the summer. Like most game expansions, this one does require you to own a copy of the base game. If you’re a fan of hobby games at all, by now you already own at least one well-used copy. 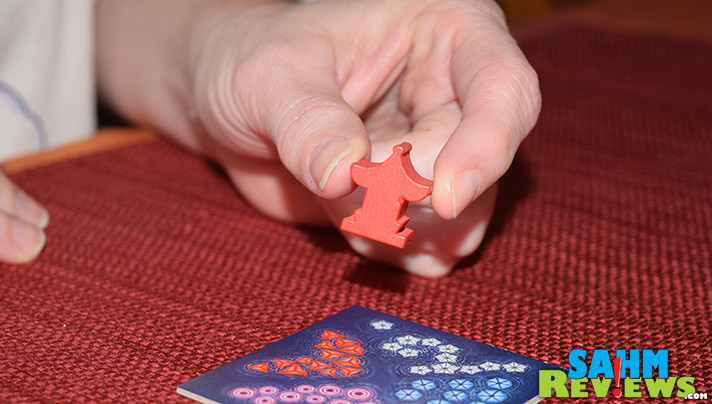 In Lanterns – The Emperor’s Gifts, the emperor has declared that pavilions can now be constructed among the lanterns on the lake for this year’s festival. Included in the box is a new starting lake tile, standard and emperor dedication tokens, wooden player and emperor’s pavilions, gift and honor tokens, custom emperor cards and five brand new “wild” lantern cards. 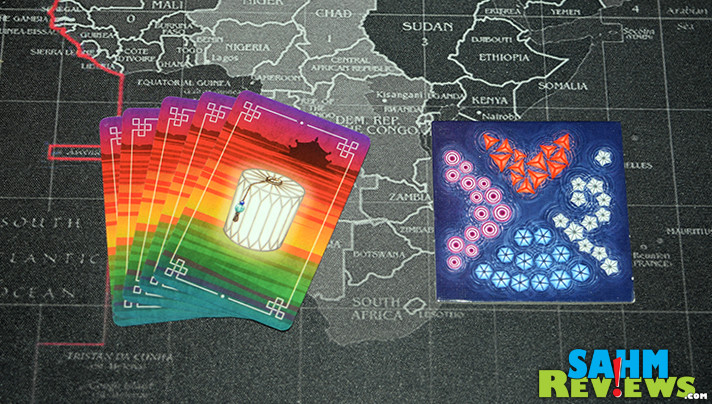 The basis of the game remains the same, but now you can employ new actions to further your progress. Once per turn you can activate one emperor card in play by paying the listed cost and activating it at the correct time (listed on the card). You may also immediately build a pavilion on a lake tile you just played (you can’t build it on previously-played tiles), as long as it is not a platform tile or adjacent to another tile with a pavilion. 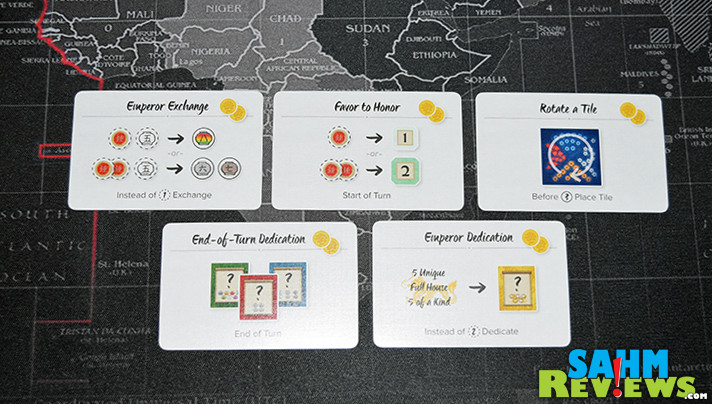 In the same way that matching colors produce favor tokens, matching the color of a pavilion awards gift tokens! If the color on any side of the newly-placed tile matches the color on an adjacent side of another tile, the active player received one gift token for each pavilion in the color match! 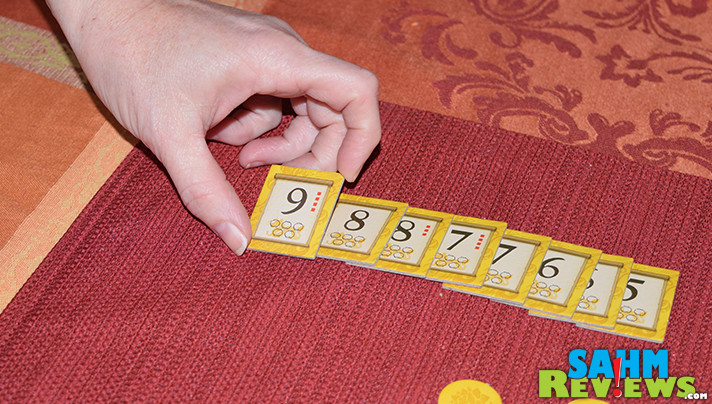 These gift tokens have a number of uses. Spend two along with required tiles to claim an emperor’s dedication (points). Spend two to rotate an already-placed tile on the board before you play yours. Also spend two to convert favor tokens into honor tokens (also points) or exchange favor tokens plus a lantern into either a wild lantern or two different lanterns! Of course you can also spend them to make a standard dedication as a bonus even if you already made one in your turn earlier.

Lanterns – The Emperor’s Gifts certainly adds a lot of options to the base game and will probably be a must-buy for those looking to increase the complexity of Lanterns. Fortunately copies are under $20 on Amazon, a bargain for the amount of new content this expansion adds. We wonder what they’ll have in store for next year’s festival!