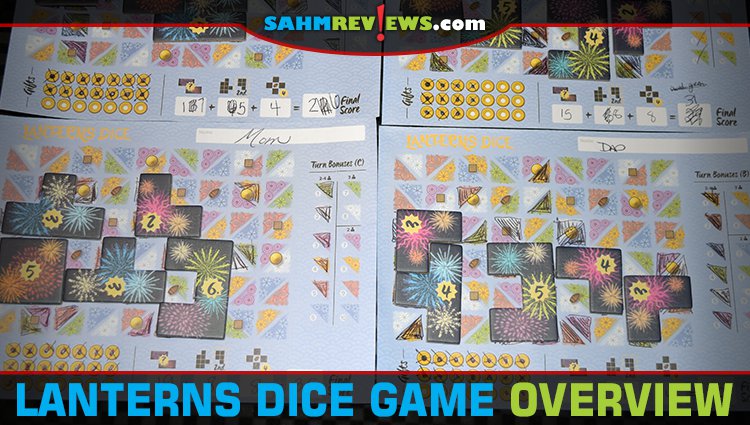 We’ve been telling you recently about a variety of roll and write (Bloom dice game and Patchwork Doodle) as well as flip and write games (Kokoro, Second Chance and Deadly Doodles). We’ve shared overviews of these games to give you an idea of the theme in addition to how they play, how long they last and how many players can participate. Before we start talking about today’s feature, let’s revisit a game overview from 2015 showcasing Lanterns: The Harvest Festival game. I’ll wait while you go read it. It’s kind of relates to what I have to say next! Take that game and add a roll and write mechanism to it and you have Lanterns Dice from Renegade Game Studios. 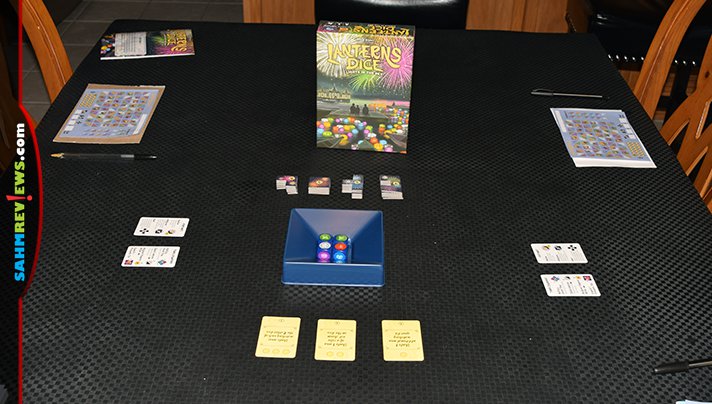 Setup is pretty simple. Up to four people can play. Give everyone a different scoresheet (labeled A-D in the top right corner). There are eight different shapes of polyomino fireworks tiles but only four are used each game. Randomly select one small, two medium, and one large shape then place the remainder in the box. Separate each shape and form a stack with the highest number on the top. Place the dice tray in the center of the table along with the four lantern dice. Place the three emperor cards alongside the play area. You’re ready to play!

Before I go into an overview of how to play Lanterns Dice, it’s important to know how to read the scoresheet. It’s divided into four sections. The upper left section is the primary game play area and represents the lake where the lantern festival takes place. It’s divided into square pools made up of two triangular lantern sections each. The upper right section is where you track your turns. This section of the sheet is unique based on the scoresheet letter (A-D). The bottom left is where you track gifts and the bottom right is where you’ll tally your score at the end of the game. 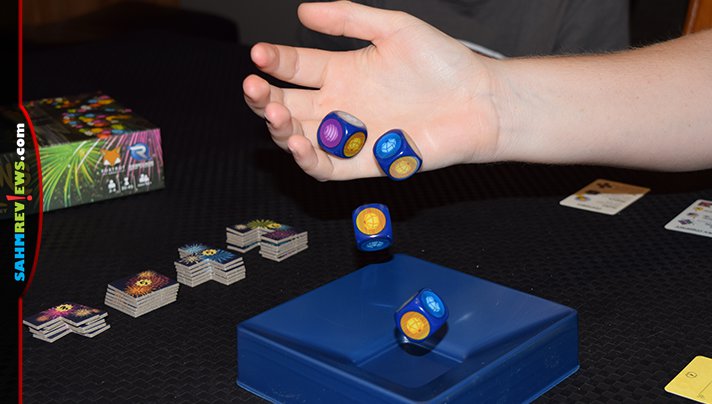 Lanterns Dice takes place over a variable amount of rounds as designated by the number of players. Starting with the active player and moving clockwise, the following steps are taken. The active player rolls the dice then orients the tray. The goal of Lanterns Dice is to decorate the lake then launch fireworks into the sky. 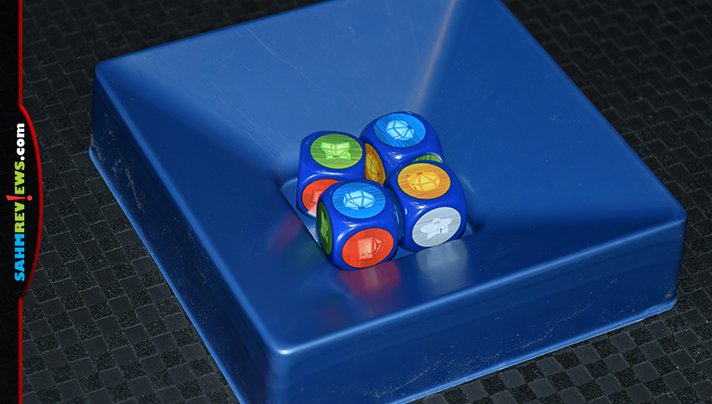 But it isn’t simply a matter of coloring in the spaces of the color you rolled. You’re only able to place based on the orientation of the dice within your view. After you (active player) have rolled the dice, you’ll orient the tray. Each player will have a unique view so everyone lake on their scoreboard will be unique. 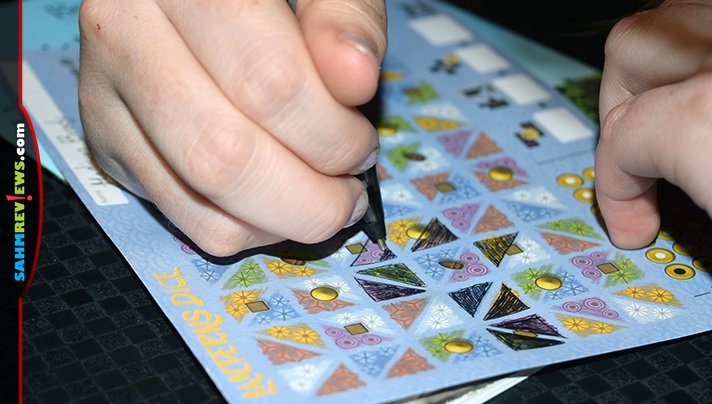 Once the active player has determined which direction the tray will face, all players begin to shade an area on the scoresheet that matches the die they’re facing. But it’s not just a matter of willy-nilly shading in sections of the lake. You’ll need to factor in the various features including pavilions, platforms and boats. 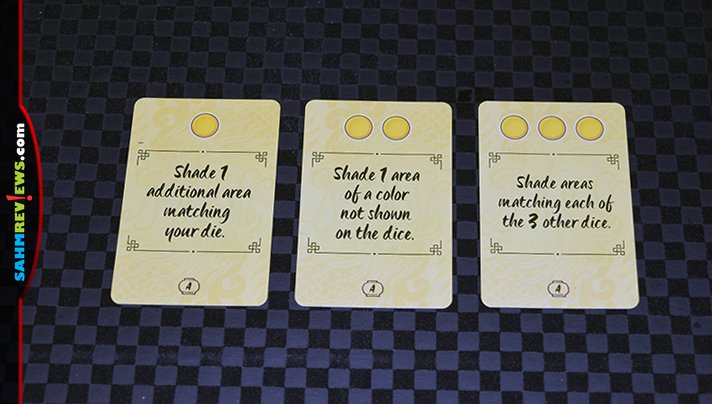 Pavilions are represented by yellow circles in the lake. Each time you shade next to one, you earn a gift from the emperor. Gifts can be cashed in to re-roll the dice when you’re the active player or perform an action on the face-up side of an emperor card.

The gray squares in the lake are platforms. Each time you shade the second area next to a platform, you immediately get to shade an area in an adjacent pool. The final feature is the boat. While you earn bonuses for shading next to or surrounding the platforms and boats, the boats only earn you points if you leave the spaces next to them unshaded, but have shaded the spaces orthogonal to that. You’ll tabulate those during end-game scoring. 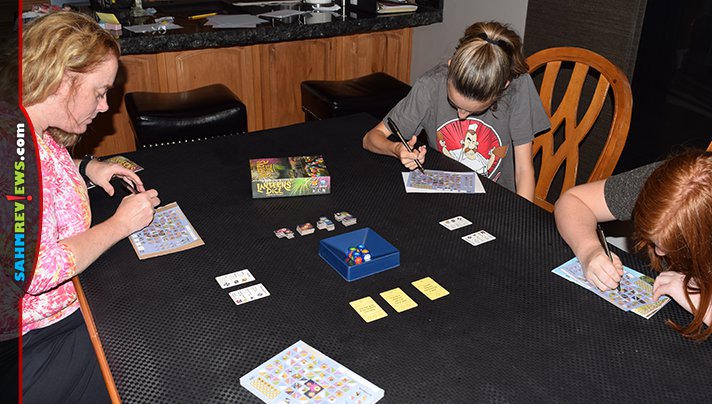 While inactive players are sharing their respective sections, the active player has two actions to take. First, shade the section for your color then take the turn bonus for that round.  It’s time to move along to the next step where all players may simultaneously spend gifts to perform one action from an emperor card. 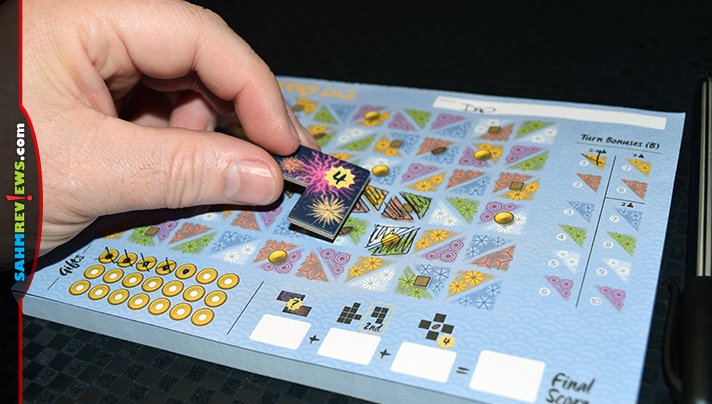 So here’s where things get interesting. Only the active player may launch fireworks displays. At the end of your turn (as active player), if you have sections of your lake that area completely shaded to match one of the available firework tiles, you may launch it. Take the tile from the top of the stack and place it on your lake over those shaded areas.

Players take turns being the active player for the designated number of rounds. After everyone has taken their turns, each player may launch one final firework display to close out the festival. Players add up their points and record them in the appropriate section of the scorecard. Next, determine your second largest contiguous group of completed pools. You’ll score one point for each completed pool within that section. Finally, tabulate points for boats that meet the scoring requirement and sum the final score. The player who has earned the highest honor is proclaimed the winner by the emperor!

What’s your favorite place to enjoy a fireworks display?

5 comments on «Lanterns Dice: Lights in the Sky Game Overview»