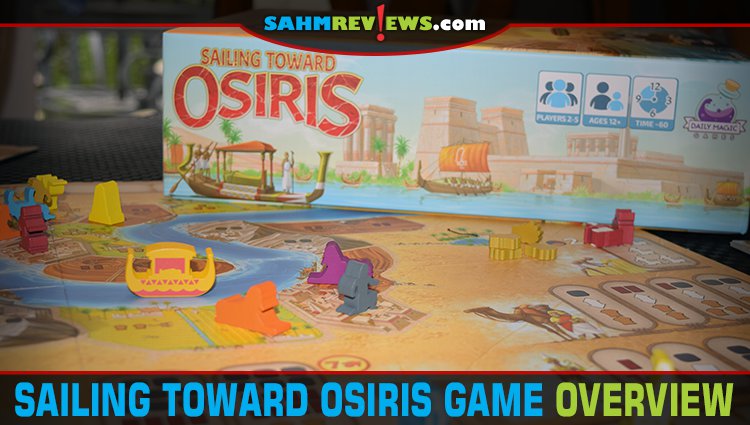 One of the things I find interesting about attending symphony events is reading the notes regarding the composer and the piece. It’s a glimpse in to history and customs that have been shared through musical masterpieces. I also enjoy visiting museums as a way to learn about how things transpired in other places at a point in time well before me. Of course, board games like Manhattan Project, The Ruhr and the Birth of America series from Academy Games all serve a similar purpose and are far more social. Sailing Toward Osiris from Daily Magic Games is a game about ancient Egypt and what happens when a pharaoh dies. 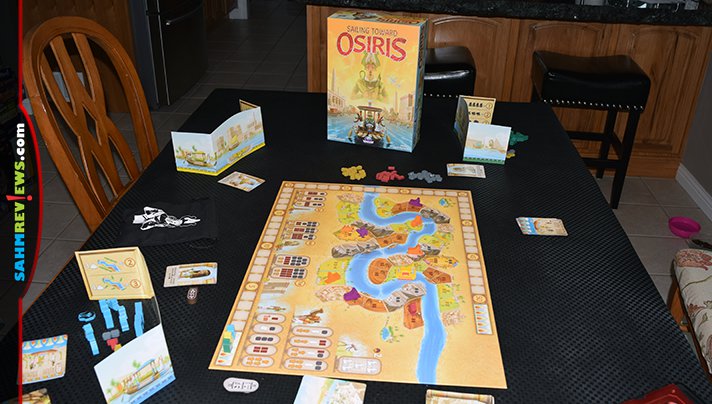 I’ll admit that I don’t know how historically accurate the game is, but I would like to believe it has some relevance to the time period. Basically, when a Pharaoh with no offspring dies, the Governor’s of the land are responsible for building monuments in his honor to help his spirit earn favor with Osiris in the afterlife. Up to 5 players will act as Governors and compete for the honor of being crowned the new ruler. To set up the game, determine the number of laborers and resources allowed (based on player count). Form a resource pool within reach of all players and place all laborers in the draw bag. Place the barge in the first section of the river on the far right of the board. Each player selects a color then takes the corresponding player screen, Boon cards and monument tokens. Shuffle the deck of cards and give one to each player.

The game takes place over four rounds and is tracked by moving the barge to the four sections of the river. Each round consists of several steps: acquiring laborers, performing actions, haggling and closing the season. As a reminder, your goal is to build monuments to the recently deceased pharaoh! To begin the round, each player draws a designated number of laborers from the bag and secretly places them behind their player screen. Additional laborers are drawn and placed in the Labor Pool space on the board. Two will remain in the bag and will be viewable only by the round’s Regent (the starting player for the round). 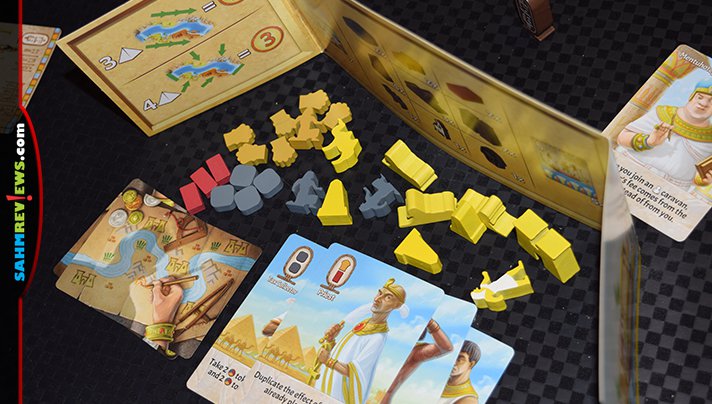 Chapter two is a little more involved. There are 10 possible actions to take. You can harvest resources by placing one of your laborers on an available field in the active section along the river or further down river. The catch is that the laborer can only gather resources in a space corresponding with their profession. Tan is a farmer, red is a brickmaker and gray is a stonecutter. If there aren’t any monuments built, the laborer can harvest two adjoining pieces of land, otherwise, only a single open space next to a monument. A Master of his trade (indicated by the white markings on the meeple) is able to harvest across any space the relates to their field, including up river from the barge. 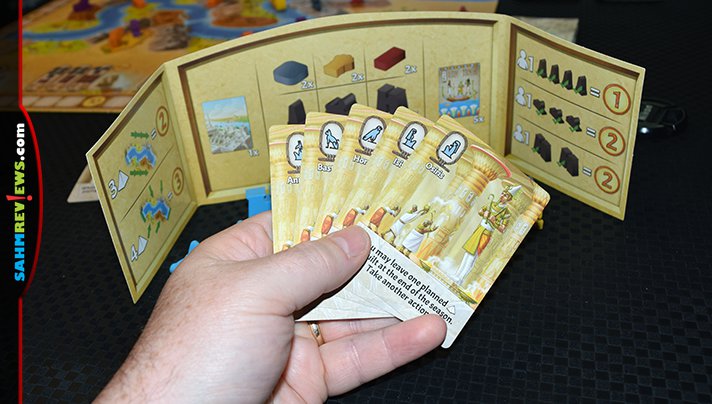 As an action, you may play cards for either their resource value or their action. As an alternative, you may use any laborer to visit a city to collect more cards. The interesting part is that each time you do this, you’ll take two cards from the draw pile then select one to keep. The other is up for auction to the other players. They’ll bid (or not) for the card and you’ll collect the winner’s bid and award the card. As an alternative, you can play a Boon card. These are more powerful and allow you to do things like delay building a monument until the next season or move a laborer to free up a space. Because they’re so valuable, players are only allowed to play one in a season and it must be unique from any others played during this same duration. 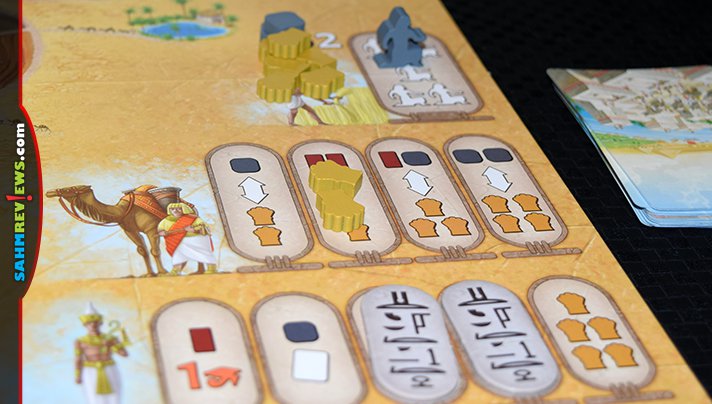 You can hire additional laborers, trade resources at the market or start (or join) a caravan. Resources are limited in this game and when I say limited, I mean REALLY tight. You’ll need to plan well to make sure you have the ones you need while balancing what is actually available. 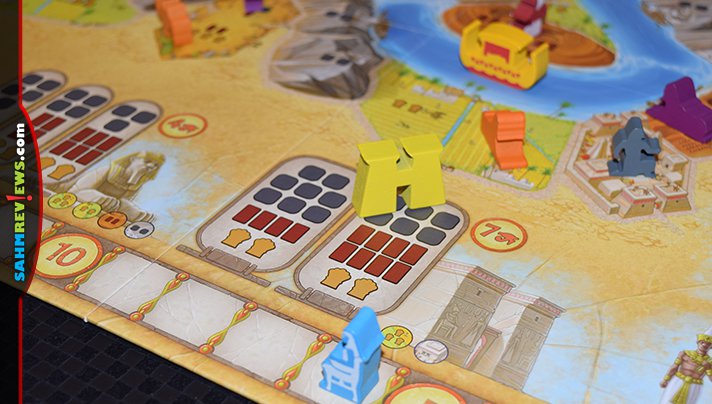 But as I said before, your goal is to build monuments as that’s how you earn prestige. You can’t build monuments unless you have gathered the required resources. When you’ve done so, you turn them in as part of the monument planning action. In some games, it’s frustrating when people build when you want to, but in this case it’s bittersweet. Someone else building means those resources are back in the supply!

On a subsequent turn in the same season, you can build it on an available parcel along the river. If it happens to be in the same section as the barge, you’ll earn the monument’s Victory Point value along with a bonus point. Obelisks are worth 2 (or 3) victory points, Sphinx monuments earn you 4 (or 5) and Pylons score you a whopping 7 (or 8)! 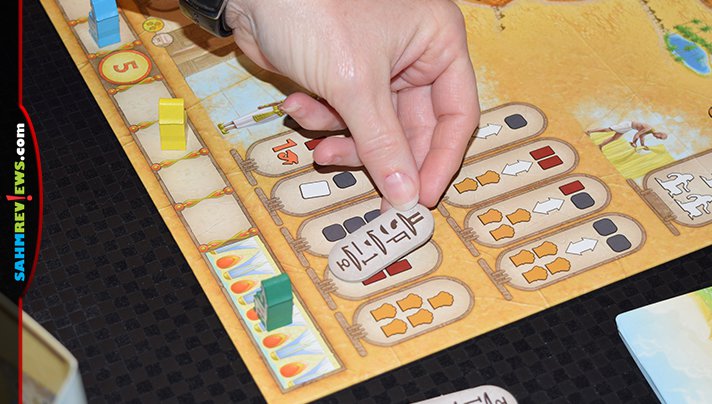 There is not a limit to how many actions you may take as long as you have the cards, resources or laborers to continue. Laborers do not carry over from round to round so it’s plan accordingly to use them! As a final action, you may withdraw from the season. The first player to do this earns the right to be the Regent for the next round and gets to take one of the available Regent bonuses.

The base game flows fairly quickly since you can only take as many actions as you have resources, cards and laborers. To mix things up a bit, you can add the Governors & Envoys expansion. It includes more Governor cards, an additional Boon card for each player, objective cards, Envoy tokens and a Regent starting piece.

Sailing Toward Osiris is available on Amazon for around $40 or grab the Kickstarter edition direct from Daily Magic Games. You can add the expansion for less than $13! Curious what else Daily Magic Games has in the works? Check them out on Facebook and Twitter!

Have you ever visited Egypt?