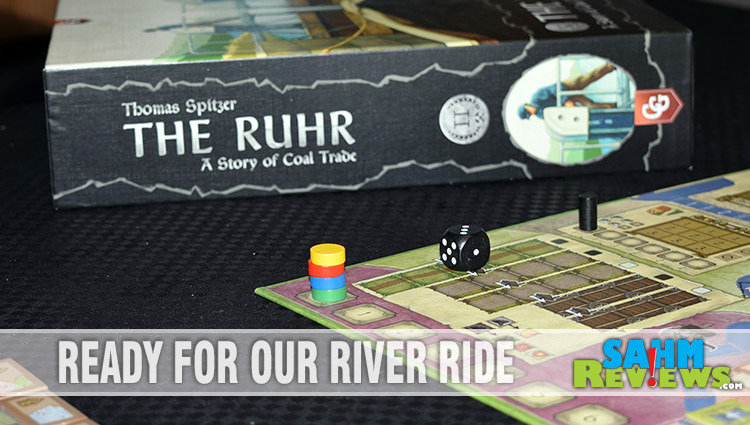 The Ruhr: A Story of Coal Trade Overview

We’re fortunate to get to play hundreds of brand new games every year. Today’s market demands that a game be finished, polished and fun to play before it is published. Bonus points if there is an educational lesson buried withing the mechanics or theme. The side-effect of having so many to choose from is that many gamers worship what is called the “Cult of the New”. While we’re guilty of this ourselves, sometimes the desire to get our hands on a new issue is justified.

There aren’t many games that tie into each other. What I mean is most games are one-and-done. With few exceptions, the theme doesn’t continue on to the next issue. Academy Games does a good job of staying ‘on topic’ with their Birth of America series where you can experience different key events during the founding of the United States. Plan B Games is attempting to do the same with their Century series, albeit with much less of an educational aspect and more about light game play. Last August we hinted about another company, Capstone Games, that was beginning to offer a new series that would be complex enough to please their customer base of gamers that like more complex games as well as educate the participants on the history of the coal trade in both the U.S. and overseas. 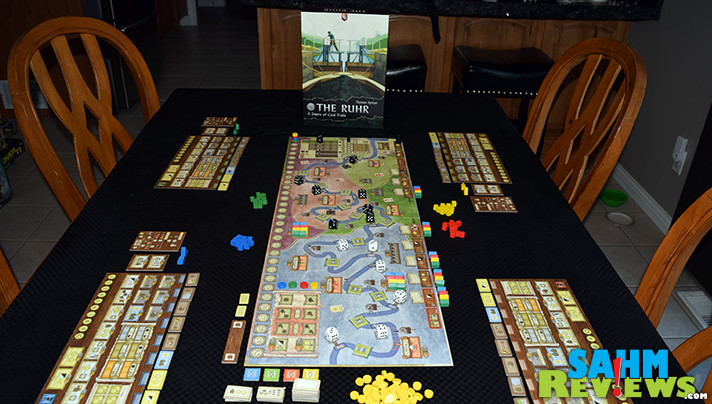 The Ruhr: A Story of Coal Trade is the second installment in Capstone’s series of games about the burgeoning coal industry of the 18th and 19th centuries. The first in the series, Haspelknecht, was met with positive buzz for its balanced game play and historically accurate theme. As you may recall, we thoroughly enjoyed it as a successor to our previous favorite coal-themed game, Coal Baron.

At that time we knew of Capstone Games’ plans to continue with the series, with each succeeding title continuing the story of the coal industry as well as expanding on the game’s complexity. We’ve always been proponents of games that teach and have been anxiously awaiting the second installment. With the recent issue of The Ruhr: A Story of Coal Trade, it is safe to say Capstone has delivered as promised! 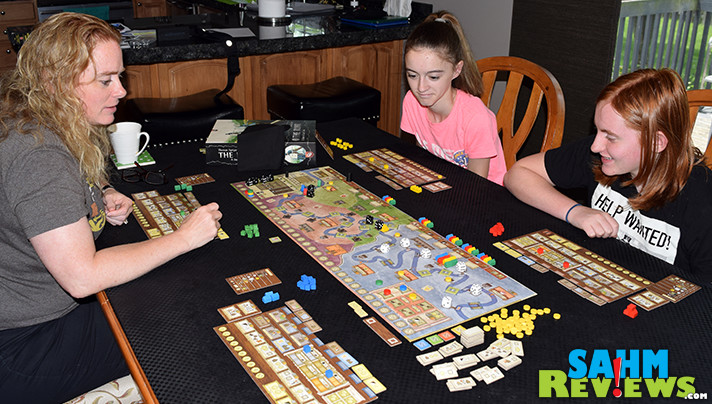 While Haspelknecht was centered around how coal is removed from the ground, The Ruhr: A Story of Coal Trade continues the story by focusing on how the raw product is carried from the mines to various industries. A major means of transport was along the Ruhr River via coal barges. At that time there were no locks on the riverway, so every time a load encountered an unpassable area it would have to be unloaded from one barge onto another on the other side of the danger. Product loss occurred as well as degradation of the quality of what was left since it would easily be damaged. All of these hazards are represented in the game! 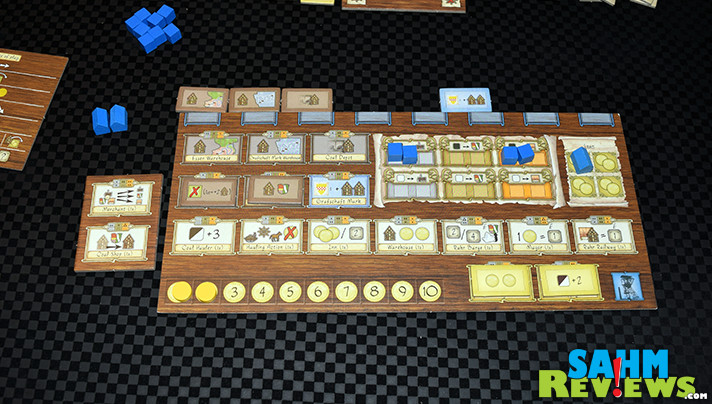 The Ruhr: A Story of Coal Trade is played over 12 rounds (2+ hours) and supports up to four players. Each person begins the game with a personal player board and extension, one barge and one warehouse. The main board is set up in the middle of the playing area and pre-populated with dice as shown in the setup, additional player warehouses, country flags and player markers on the victory point track.

At the beginning of each round a Historical Event occurs and is determined by the placement of the round marker and may benefit all players or have a negative effect (denoted by a red border). Then a new Obstacle/Demand Marker is drawn from the included velvet bag and resolved. These typically add Thalers (Europe’s currency of the time) to various spaces on the board to be earned by players. 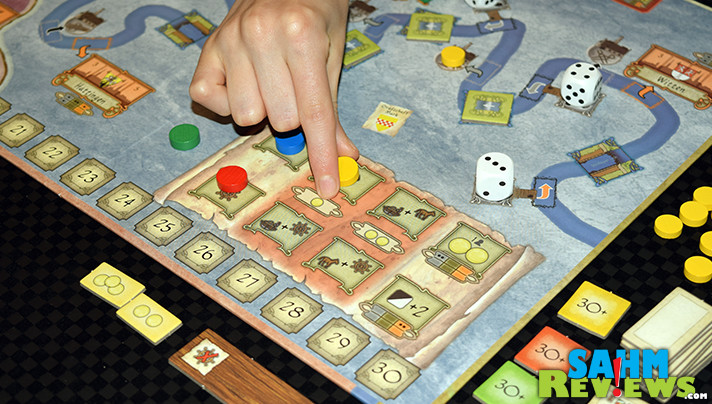 Then in player order, everyone moves their barge to a coal storage space on the Ruhr to pick up a die. You may move as many spaces downriver as you wish, but in order to move upriver a special action must be taken, with each player having a limited number of special actions available to them. Next the coal (the die) is delivered to its selling space two spaces downriver from the pickup location. Again, a special action may be used to deliver to any city or industry downriver. If any obstacles are present along the way, the die is turn down one to the next lower value, effectively decreasing the selling value by one also. 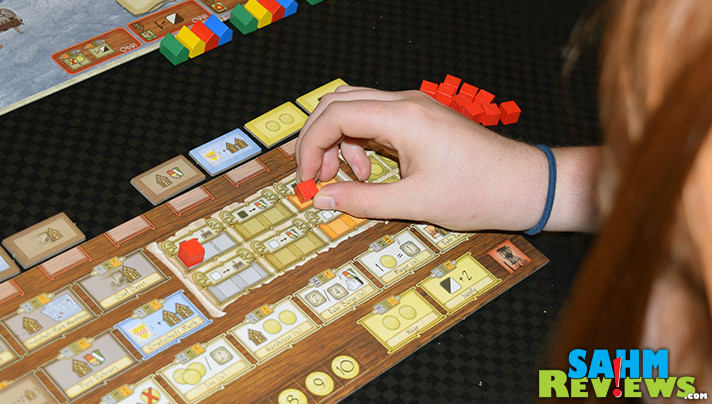 You’ll receive Thaler equivalent to the pip count on your die and anyone with warehouses built in that city will also receive a Thaler. The die is returned to the transport track to be supplied to another location at a later time. On your personal player board you also get to purchase and place a cube on the spot matching the type of delivery you just made (black or white die, city, port or industry location). Placing these cubes will create a pattern that matches progress markers. Once you fulfill the pattern requirement, you may claim the matching marker, giving you that special ability to use. 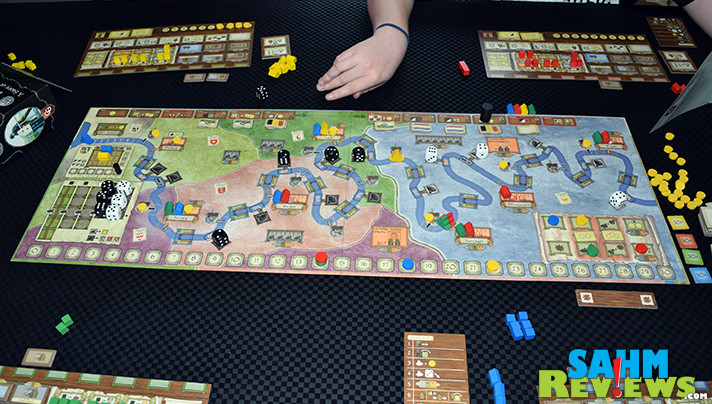 If you run out of money, you may take on debt, which you will repay at a premium in a later round. If you do not, you will sacrifice victory points at the end of the game. The game also limits you to a maximum of 10 Thalers, so if you exceed that amount at the end of a round, you will forfeit any extra! 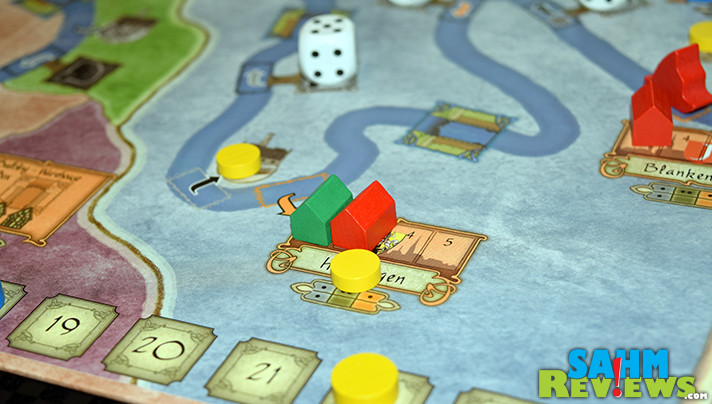 After 12 rounds, in addition to points earned during the game for building locks and warehouses, along with export awards and obtaining the Inn progress marker, you’ll add points for having warehouses in certain areas, the location of your barge and having no debt! As always, the player with the most points wins The Ruhr: A Story of Coal Trade! 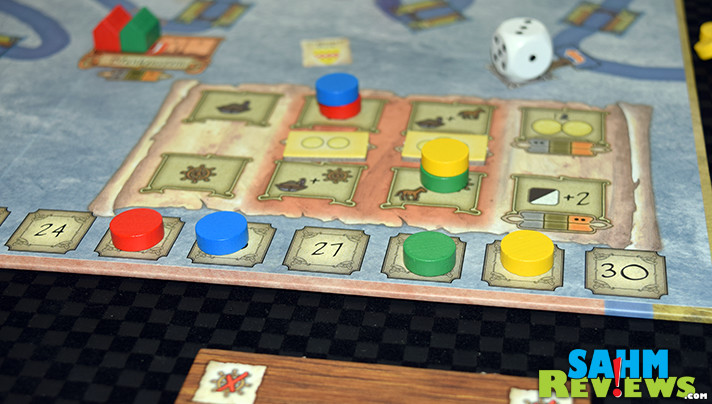 Included is also a version that takes place in Ohio during the early 19th century. Alternate artwork is on the back of the main board and all player boards. The game plays in the same manner with different tiles and flags used throughout the campaign (and a few other things we’ll leave as a surprise). We recommend starting with the original version on the Ruhr and then proceeding across the pond to the U.S.

Even if you haven’t played or own the first in the series, Haspelknecht, The Ruhr: A Story of Coal Trade is worth picking up on Amazon for under $45 shipped. There’s a lot going on and you’ll need to plan ahead a couple turns to maximize your deliveries. We’re very excited to find out more about the third (and last) in the trilogy, so we’ve made sure to follow them on Facebook and Twitter to immediately know when the next one will be delivered! While you’re at it, be sure to take a peek at Capstone Games’ website where you’ll find a number of other non-coal-related games!

7 comments on «The Ruhr: A Story of Coal Trade Overview»