In the late 70’s and into the first part of the 80’s, my family was stationed in West Germany. I attended 4th through 7th grades and into the first quarter of my 8th grade year before we were transferred back to the States. While we lived in Europe we did quite a bit of travelling, making sure to take advantage of our proximity to all that history. One of the most memorable trips was to what was then West Berlin. But that’s a story for another day.

We weren’t technically a military family since both of my parents worked for the government and not an armed branch. So instead of being assigned housing on base, we were afforded with a rental house “on the economy”, which was government speak for living amongst the citizens of Deutschland. We had German neighbors, shopped at German stores and even ate at German restaurants! My parents were stationed in Worms, the home of the famous Martin Luther, but our house was across the river in Hofheim, a much smaller (and non-famous) community.

Having grown up on the banks of the Mississippi, crossing the Rhein river every day to go to school in Worms wasn’t out of the ordinary for us. It is only later in life that I now appreciate the history and unique facts about the Rhein. Interestingly, it is one of the few rivers in the world that flows north, starting in Switzerland and emptying into the North Sea. I remember seeing barges and other larger vessels and never gave them much thought since I was accustomed to seeing the same on the Mississippi. I didn’t realize how great an impact it had on the growth of industry during the Industrial Age.

It shouldn’t come as a surprise that my awakening is the result of playing a board game. We’ve recently been enjoying Rhein River Trade by Devir Games, which we picked up solely based upon the familiar theme. Promising a 1-2 hour experience for up to five players, Rhein River Trade is one of those ‘thinky” games we enjoy playing as a family. Not only does this type of game provide entertainment, it forces us to strategize a few moves ahead and teaches us a little bit about history at the same time! 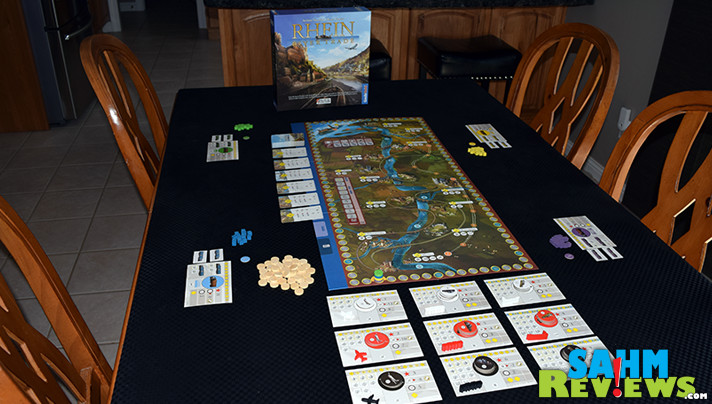 The premise behind Rhein River Trade is you are the head of an important freight company based in Basel. Your job is to use your logistic skills to transport containers of goods to cities on or near the Rhein River, or as far away as London. Each order you take has a number of containers, its destination, a price and a possible penalty. To complicate matters, you are sharing a limited number of planes, trains and ships with the other players! 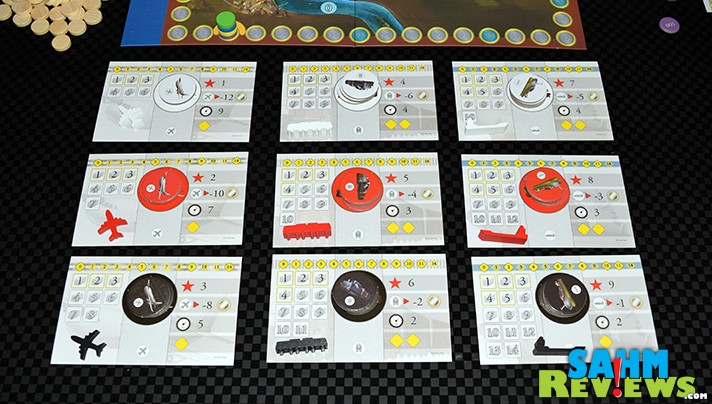 Most game boards lay out horizontally, but Rhein River Trade runs from bottom to top (in the direction of the river’s water flow). All players begin the game with a Truck Mat, 2 Truck Tiles, 15 Containers, a Capital marker and a “100” Tile, all in their chosen player color. Plane, train and ship mats are also placed near the game board, with some being discarded if playing with less than the full compliment of five players. Each of these mats also have a matching transport piece placed on top of it, along with corresponding reservation markets. A pool of Time Tokens is also placed next to the game board to create a common pool for all players. 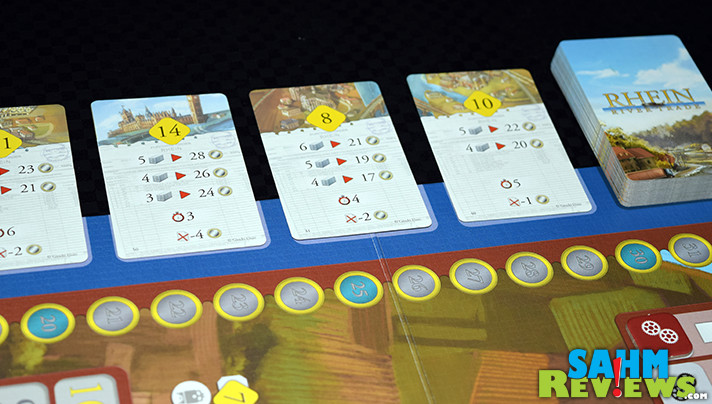 Each game is played over a number of rounds (from 7 to 10, depending upon the number of players), with rounds divided into six phases. During the first phase, New Order cards are revealed equal to the number of players plus two and each player may take one order, going in reverse order of their Capital (money). 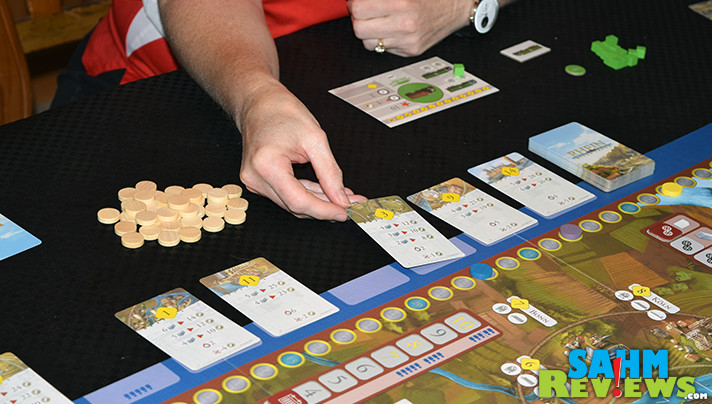 The number in the yellow diamond on the card indicates the city where the order is headed to. There are also a number of delivery options listed and their potential payout when complete. Listed below that is the number of rounds you have to complete the delivery as well as the penalty for failure. 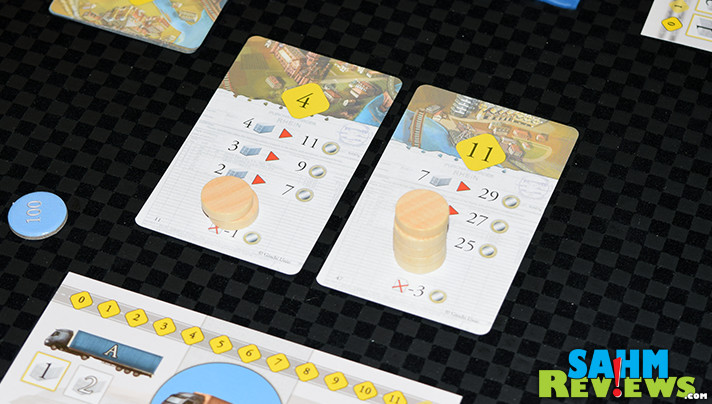 Also in reverse order of Capital, each player may load containers on available transports by taking a container cube from their personal supply, paying 1 Capital for each container and place it on one of the transport maps (plane, train, ship or personal truck). Transport’s maps dictate which cities that particular carriage type may travel to, their maximum load, initiative value, speed and number of stops they may make in one trip. Because there are limited spaces in each haul, the best transports fill up quickly! 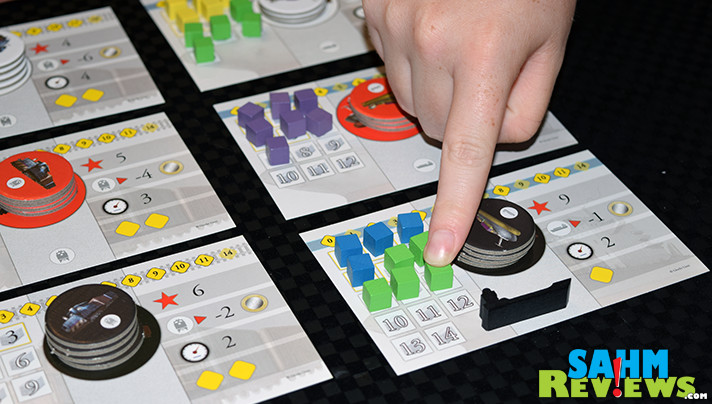 After all containers are loaded, players may reserve stops for the transports, again in reverse order of Capital. Making a reservation ensures that the transport will stop at the reserved city so you may unload your containers. Transports that meet all requirements for movement will move in ascending initiative order during Phase 4. In order to move out of Basel, planes, trains and ships must have their reservation marker on the board and have a minimum load of containers on the transport map. Couriers already in progress (in other cities) will move regardless of their load size. 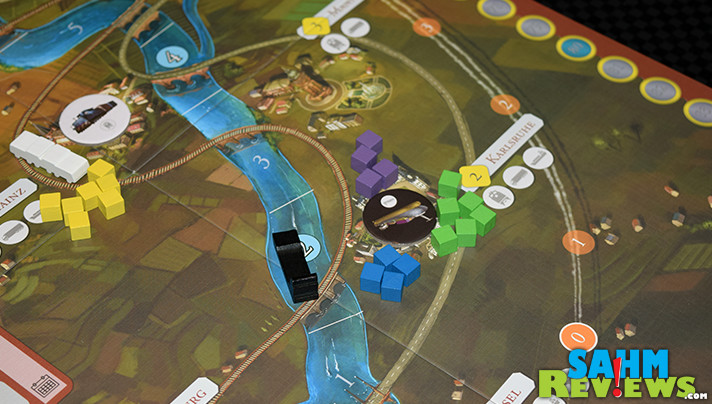 Once the deliveries have been made to the cities, Phase 5 allows players to fulfill orders by matching one of the quantities of containers on their order card. They will collect the listed Capital and remove the containers from the board, back to their supply. The fulfilled Order Card is kept face-down in front of them, as these are kept as a potential tie-breaker at the end of the game.

Lastly, all remaining Order Cards not claimed in Phase 1 are discarded and players remove one Time Token from any of their orders they have not fulfilled. If the discarded Time Token was the last one on the card and the order wasn’t fulfilled, the Order Card is discarded immediately and the player pays the penalty to the bank. Any planes, trains or ships which have containers on board but never left Basel are automatically unloaded, with the container cubes being returned to each owner. If there are any transports which are completely empty and have no further reservations on the board, they are also immediately returned to Basel. 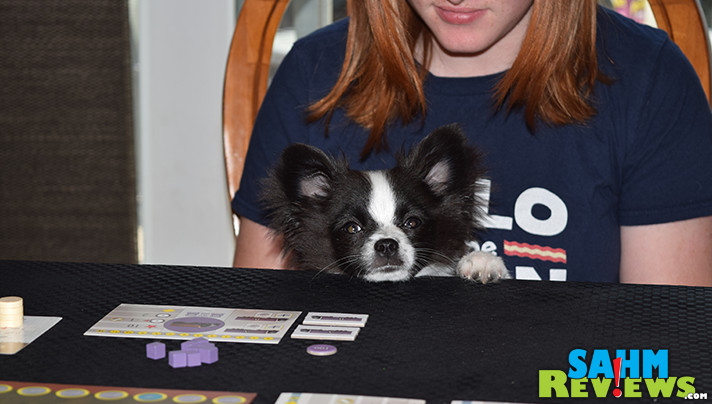 You might think it is easy to get containers into as many cities as possible while you wait for orders to arrive. Any containers in cities other than Basel will cost the player 1 Capital as storage costs each. The round counter is then progressed to the next number and a new round is begun in the same manner. Once the final round is completed, the game ends and players determine their final score. 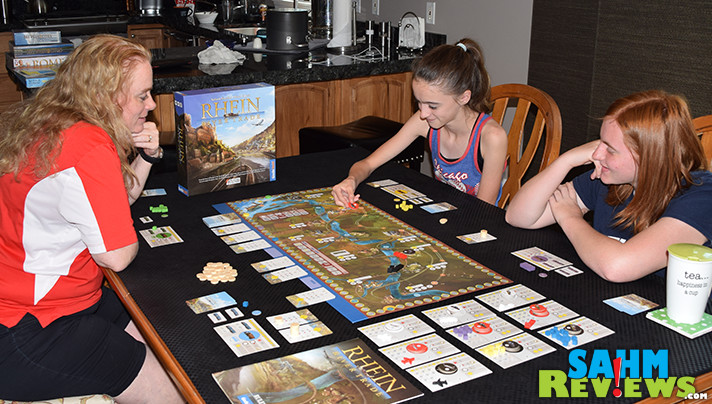 During the game you may take out a mortgage on your trucks if you don’t have enough to pay for a shipment, storage or any other penalty. Take six Capital from the bank and turn the Truck Tile face down as it cannot be used while mortgaged. It may be paid off at any time for 9 Capital or at the end of the game for the same amount.

At the end of the game, each player must pay the listed penalty for every unfulfilled order they are still holding, 1 Capital for each of their containers on a transport and 9 Capital for any mortgaged trucks. After paying all end-of-game fees, the player with the most Capital wins Rhein River Trade! As hinted upon previously, if there is a tie, the person with the most completed orders breaks the tie.

It’s wonderful to play a game set in a familiar scene. Many of the towns on the map (Mainz, Frankfurt, Cologne, Dusseldorf) are places we visited while we were there. One of the cities, Mannheim, is where I attended 7th and part of 8th grade! It also compliments our recent acquisition, The Ruhr, which is also set in Germany!

Reasonably priced at around $45 on Amazon, you’ll find great value in Rhein River Trade if you enjoy traditional pick-up-and-deliver euro games. Ask your local game store if they’re carrying Devir Games products (and if not, ask why not?!)! And if you’re still not having much luck locating a copy, enter to win one from us using the giveaway form below!
Rhein River Trade Game Giveaway